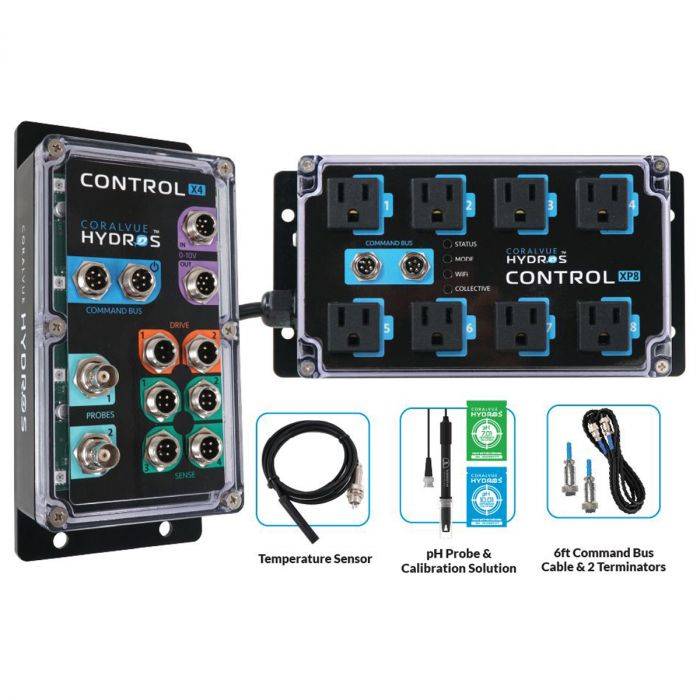 Master your aquarium automation with the HYDROS Control X4 Pro Pack featuring TWO control devices for the ultimate failsafe. The Control X4 allows you to connect up to four sensors and two probes, giving you the ability to monitor temperature, water level, pH, ORP, and more. The Control X4 also includes two Drive Ports for powering pumps and solenoids, and two Command Bus ports for connecting to and communicating with other HYDROS devices. The second included controller, the Control XP8, provides 8 120V AC outlets for powering and monitoring your aquarium's critical life support equipment. Both devices can send alerts and notifications and connect up to 8 WiFi devices for added modular control on additional equipment like lights, pumps, feeders, and more by simply adding a HYDROS WiFi Power Strip or HYDROS Smart Plug (both sold separately).

The HYDROS Control X4 is equipped with four Sense Ports, two Probe Ports, two Drive Ports, and two Command Bus Ports. Control X4 can send alerts and notifications through the HYDROS app and with the addition of the HYDROS WiFi Power Strip or HYDROS Smart Plug, it can also control outlets for lights, pumps, feeders, and more.  It can be used as a standalone controller for saltwater aquariums, freshwater tanks, pond applications, or it can be added to other HYDROS Controls to build a more extensive system. The Control X4 operates on a HYDROS Safety Net and it is rated IP65 to keep your equipment and aquatic life alive and thriving.

2x Sense Ports -- A Sense Port is a generic input port that can accept data from numerous different types of sensors, including but not limited to:

2x Probe Ports -- The Probe Ports have circuitry based on an ultra-high-quality input chip specifically designed for use with ORP and pH probes. The result is that each input provides digital galvanic isolation from the rest of the system, preventing any interference with other accessories (such as motors and pumps) connected to the system. Digital Galvanic isolation preserves the accuracy of the measurement by converting the signal to a digital domain before crossing the isolation threshold, so you can feel more secure in your readings than ever before.

2x Drive Ports -- The Drive Ports provide switched 12V DC power for running small lights, motors, pumps, fans, and other accessories. The exact current being supplied by each port is continuously monitored by the Control, so if a motor or pump quits drawing current or draws too much, you will be immediately notified. A few example of supported accessories include:

2x Command Bus -- Two Command Bus Ports are available for powering the Control and connecting to and communicating with additional HYDROS devices for additional redundancy.

0-10V Port -- The HYDROS Control X4 has 0-10V I/O (input and output) ports that allow it to control and receive commands from other HYDROS devices and accessories from other brands. A legacy automation system can provide input via the 0-10V Ports. They can control variable speed pumps and can also be used to monitor simple switch closures, like push buttons or float switches.

The HYDROS XP8 Energy Bar is an eight outlet power bar and controller hybrid designed for controlling and monitoring aquarium heaters, return pumps, lights, protein skimmers, and more from anywhere in the world via the HYDROS Appp. In addition to the equipment plugged into its 8 outlets, the XP8 Energy Bar can also wirelessly control up to 8 WiFi devices including fish feeders, smart outlets, or additional power strips when paired with a HYDROS WiFi Power Strip or HYDROS Smart Plug (both sold separately).

The Control XP8 is not merely a "Power Bar"-- it is a fully functioning HYDROS system controller with its own "brain" capable of taking over intelligent decisions based on the status of other HYDROS Devices within the your HYDROS "collective". Its two HYDROS Command Bus ports allow for a wired connection to any other HYDROS controller, allowing you to power and consolidate control devices for the ultimate failsafe system.

The Control XP8 has a built-in 60W universal voltage Meanwell power supply with a 14amp max power capacity and is designed to pass ETL/UL certification.  Besides the clicking on and off of the controlled outlets, the XP8 is completely passively cooled and with its isolated power circuitry, the controller runs completely silent. Best of all, each of the eight outlets has individual power monitoring capabilities.

More Information
Reviews 7
Write Your Own Review
Only registered users can write reviews. Please Sign in or create an account
Product Questions