Randy and the BRStv Investigates team pick up the aquascaping adhesives again and this time, we are giving the sample aquascapes a full 7 days to cure before performing our stress tests. We feel this might be a more realistic scenario compared to our previous test considering a majority of new tank builds have the freedom to allow this extended curing time when creating a custom-built aquascape.

Find Out Which Adhesive Held Up The Best After Only 24 Hours Of Curing: 7 Popular Aquarium Adhesives - Which One Holds Up The Best?

Just to recap, here is a brief summary of the experiment we used in both episodes.  Randy and the BRStv team constructed 9 arch-shaped aquascapes with MarcoRocks Reefsaver Dry Rock using 9 unique adhesive solutions. After curing for 7 days, the aquascapes are put through a progressively more aggressive series of stress tests to see how each of the adhesives holds up.

We hope to learn a bit more about the unique properties of each of the various adhesives and find out which aquascaping adhesive ultimately reigns supreme in terms of bonding strength.

The team planned to perform the following stress tests in the order shown. Each test gets progressively more aggressive in terms of putting pressure on the bonds. An aquascape only moves onto the next stress test if it survives. 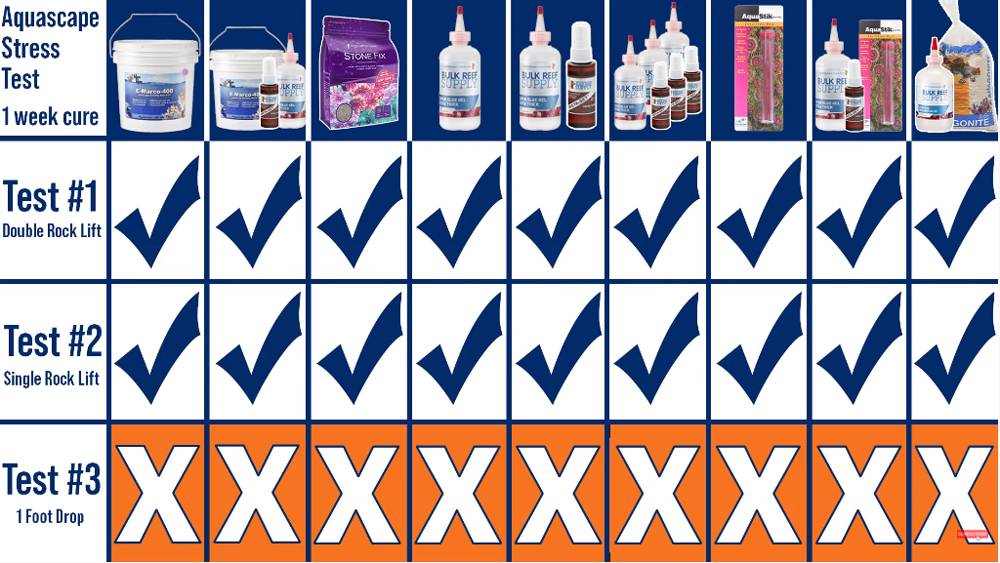 While we were excited to drop these aquascapes and watch them crumble, none of them made it to the 4th stress test. Every single one of them succumbed to some sort of damage or breakage to the rock bonds when dropped from a distance of 12" off the table.

Ultimately, the lessons learned during this experiment were less about the strength and rather more about the ease of use and where each particular adhesive shines. So here are some great takeaways for each of the different types and our BRS Recommended Method of securing live rock together.

BRS Recommended Method Of Gluing Rocks Together For An Aquascape

After working extensively with the various methods and adhesives to build aquascapes and glue rocks together, the team found the following layered approach to be the most effective and produce the best-looking result. Ryan used this method or gluing approach when building the HNSA-Habitat Negative Space Aquascape.