The BEST Major Element Additives for Your Reef Tank’s Coral Is?

If left to your own devices, exploring reef tank additives can certainly drive you bonkers and actually raise more questions than answers.  There are hundreds of different additives, some of which do the very same thing and many of which you just don't need. The good news is that finding exactly what you do need really is not all that difficult as long as you stick to the proven methods.

Why Do I Need Additives?

For the most part, additives are liquid solutions intended for direct addition to aquarium water. The need for additives can vary from sustaining water chemistry and stabilizing bacteria to adding nutrients and conditioning the water.

In a reef tank, the very first and most critical additives you will need are going to be for the purpose of maintaining your aquarium's major, minor, and trace elements. Corals have evolved to use those elements for their own growth and metabolic processes. As corals grow, they uptake various elements from the water so you must replenish them to ensure corals always have what they need available and the water chemistry remains stable.

While there are a variety of additives and methods for maintaining major, minor, and trace elements in the aquarium water, the term "2-part dosing" is sometimes used interchangeably between the various methods.  In order to be successful, it is important to understand the different approaches so you can select the right solution for your particular tank.

What is a 2-Part Solution?

It is best to start with a simplified explanation of the most abundant ions corals uptake from the aquarium water.  At the most basic level, corals uptake calcium and carbonates from the seawater to form calcium carbonate which is then deposited internally to build a stony internal structure (coral skeleton). In the process, magnesium is also used by the coral which aids in the formation of this stony skeletal structure and helps prevent the precipitation of calcium and carbonates that are in the water.

The traditional two-part is a calcium chloride solution and a sodium carbonate solution designed to provide calcium and carbonates (alkalinity) for corals.

In most cases, there is also a magnesium component in the mix which is either integrated into one of the 2-part solutions or delivered as a separate solution.

Aquarists add the two-part solution on a daily basis to replenish what corals consume. Over time, the regular addition of calcium chloride and sodium carbonate solutions (two-part) causes an abundance of sodium and chloride in the aquarium. This abundance of sodium and chloride alters the chemical composition (ratio of elements) of the seawater in your aquarium which gets progressively worse over time.

While water changes can help to reduce the effects of this sodium chloride imbalance, the only way to prevent it is to perform 100% water changes on a weekly basis. Since most of us only do 10-20% water changes, these effects just become gradually worse as you add more and more 2-part solution.

but this is not the entire picture...

So Which Additive Approach Should I Use?

This depends on the type, size, and quantity of corals in your aquarium but you should also consider your own personal preferences.

The formation of calcium carbonate applies to LPS and SPS corals (stony corals). Soft corals do not rapidly uptake calcium and carbonates because they lack a skeletal structure but they will consume a variety of minor and trace elements. Therefore, new aquariums with minimal coral or aquariums dominated by soft corals have a much lower demand relative to more mature aquariums, packed with stony corals.

To make the best choice, let's first explore the various options and understand that this will evolve over time. As your tank matures, you will not only need to ensure your adding enough additives but also ensure your approaching that supplementation correctly. Some solutions are more economical than others and some solutions are much easier to administer than others.

Methods of Maintaining Major, Minor, and Trace Elements in a Reef Aquarium

Calcium chloride, sodium carbonate, and magnesium as we described above. A traditional two-part solution will suffice for aquariums with minimal stony coral growth as long as a regular water change schedule is maintained. BRS Pharma Calcium and Alkalinity Total Package is our most popular 2-part solution that also includes a magnesium mix. This does not account for trace elements consumed by corals and will not ensure the ionic balance is maintained.

Kalkwasser is a special one-part additive that maintains both calcium and alkalinity in a reef aquarium. It does not contain magnesium or trace elements but is especially helpful in maintaining an elevated pH level.  Kalkwasser alone is great for new aquariums with minimal corals but can also work for mature systems so long as magnesium and trace element additives are used as well.

A three-part additive system that takes a balanced approach to maintain ALL major, minor, and trace elements as they are found in seawater.  The Balling Method does not allow for the creation of excess sodium chloride like you get with 2-part and can work for most any reef aquarium containing stony corals. Ionic balanced is maintained alongside a water change schedule but additional trace elements will be required as the tank matures.

This is the BRS Pharma Hybrid Balling Method that integrates trace elements into a traditional Balling Method. That is a total of 4 individual additives dosed into the aquarium to maintain sufficient water chemistry in mature aquariums. The trace elements are mixed into your calcium and alkalinity solutions, the magnesium is dosed individually, and the Tropic Marine Part C prevents the excess build of sodium chloride by maintaining the right ratio of elements as found in seawater.

A very common journey for reef tank owners is to start with the BRS Pharma Calcium and Alkalinity Total Package. Once corals mature, purchase the Trace Element Package which technically switches you over to a "Balling Method" approach with additional trace elements to replenish what the corals use.

There is also a comprehensive calcium formate solution called Tropic Marine All-For-Reef which is a single solution that incorporates the major, minor, and trace elements together. This is a great additive for smaller reef aquariums containing stony corals because it has everything you're going to need in a single liquid additive. It is by far the simplest approach to reef tank supplementation. It does work to sustain any size reef aquarium with stony corals, but it can become quite costly for use on large tanks because you will be using quite a bit of the solution each day. 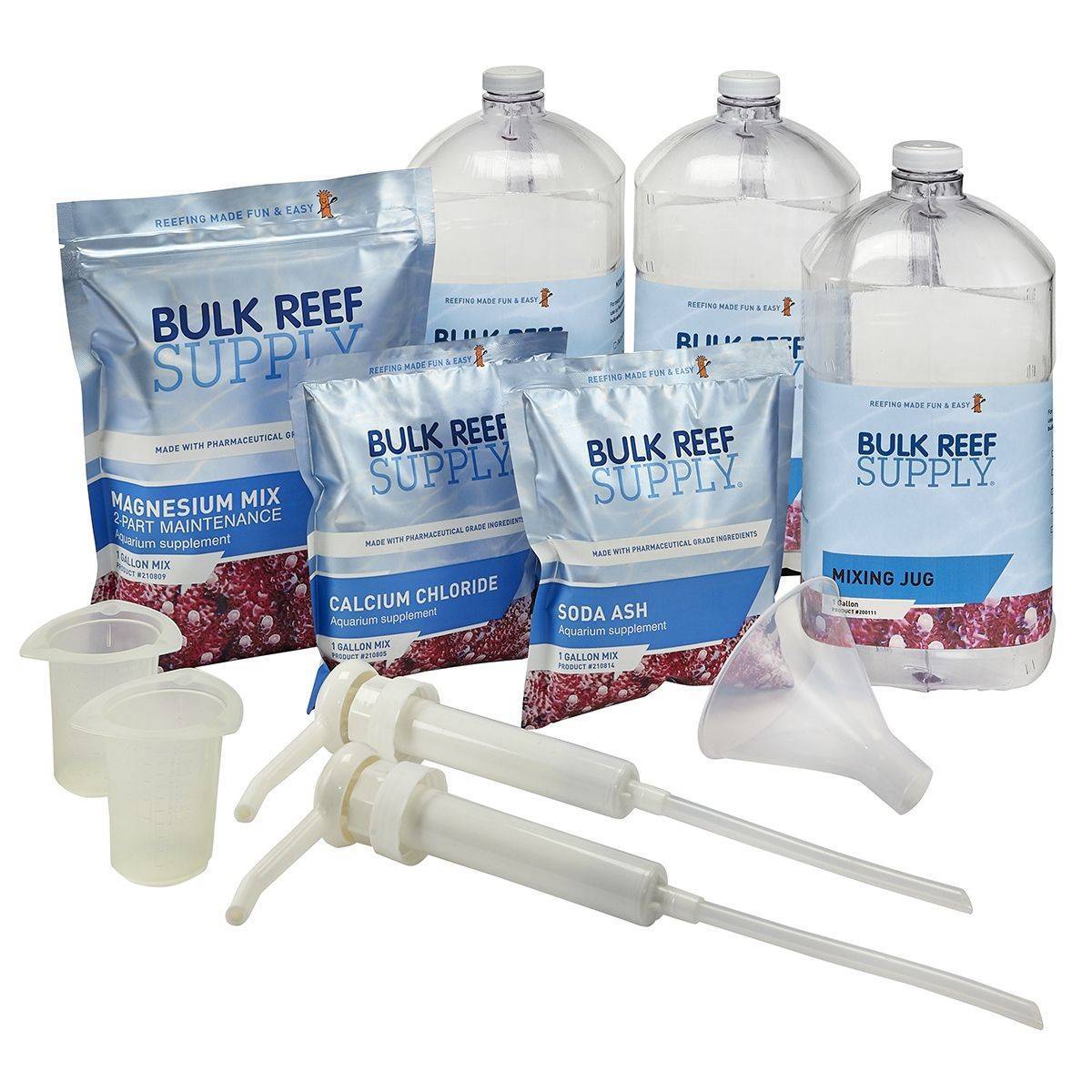 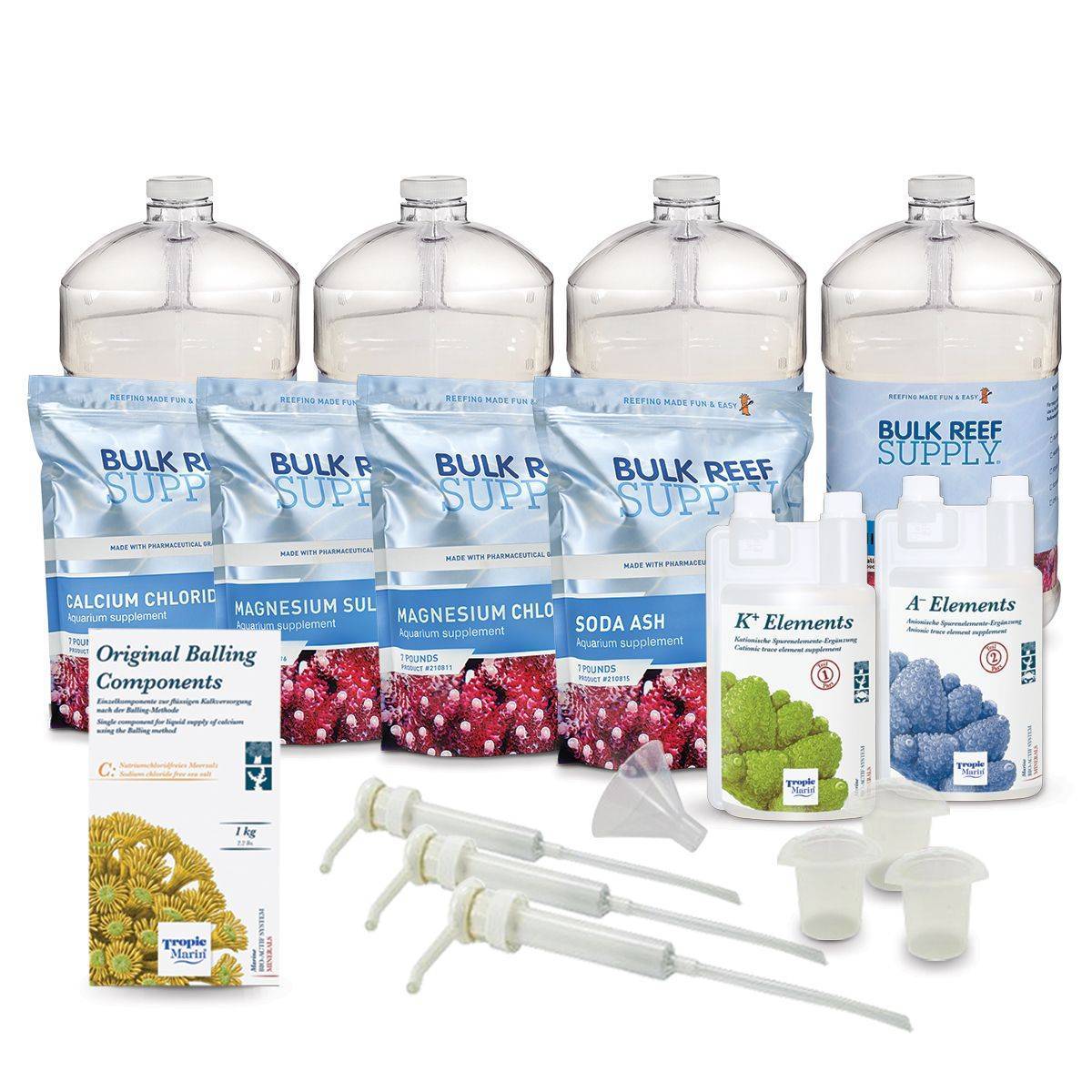 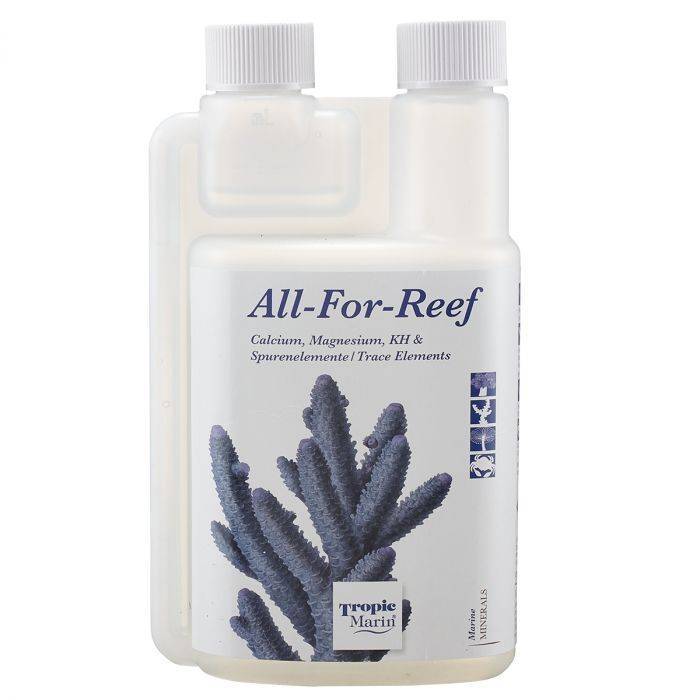 Tropic Marin
All-For-Reef
Easiest to use and ionically balanced.