As water evaporates from your saltwater aquarium, pure H20 leaves the tank in the way of gaseous water molecules and all of the salt and minerals are left behind. If left unchecked, this results in the lowering of the water level in your tank along with an increase in salinity.

To combat fluctuating water levels and salinity swings, hobbyists make regular additions of fresh RO/DI water to make up for the water lost to evaporation - topping off the aquarium.

While you can manually add small amounts of fresh water into your aquarium daily to sustain a constant water level, this task becomes tedious and is easy to forget. Even going just a few days without fresh water can cause stressful salinity swings and drop water the level enough to damage your pumps.

This is exactly why Auto Top Off Systems (ATO) are such a valuable piece of equipment for a saltwater aquarium, they eliminate the need for daily top-off and automatically add freshwater into your aquarium as needed. While you can certainly survive with the manual addition of freshwater, 99% of hobbyists wind up with an ATO system within the first 12 months.

How an ATO Works

There are also gravity-fed ATO systems that simply use a float valve connected to a raised freshwater reservoir.  When the water level drops, the float opens and allows water to flow into the tank until the water level is restored and the float closes. 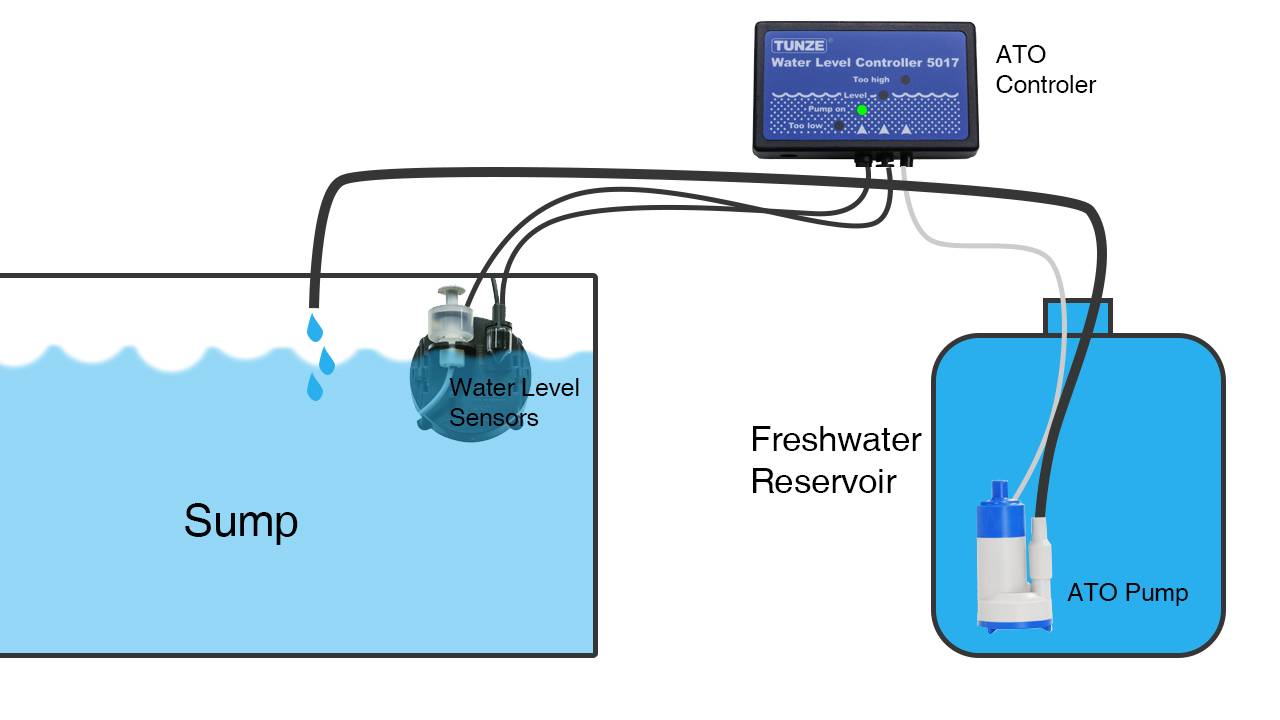 For the most part, there are three major types of ATO systems that work slightly differently based on how they monitor the water level.

The biggest risk with an ATO is going to be an overfill where the sensor or controller fails to turn off the pump. This causes the water to rise beyond your set water level, eventually causing an overflow. You might also experience an "underfill" in which the ATO fails to add water. This might happen if the sensor fails to register a drop in water level or if your freshwater reservoir runs dry. Water level sensors can fail for a variety of reasons but most often malfunction because of algae build-up or some tank inhabitant (snail/hermit crab) crawling onto the sensor.

The most reliable ATO systems always have some kind of redundancy built right in to protect you against these common failures. This could be multiple sensors, built-in logic with a maximum fill time, and/or an audible alarm. Connect your ATO system to an aquarium controller with even more sensors and you can achieve further redundancy.

How to Choose an ATO System

Some ATO systems have certain mounting requirements or restrictions. Be sure to do the research and read through the user manual to ensure you can accommodate any special mounting requirements.  A perfect example is the Reef Breeders Exo Auto which has a magnetic optical sensor that can only function through clear glass.

ATO pumps are typically very small because water evaporates slowly and you just don't need a strong pump to keep up. That being said, the size of the pump does matter and most of the small ATO pumps don't have the power to push water up vertically beyond a few feet. This could pose a problem if your freshwater reservoir is located fair away from your sump or tank. Also, some ATO systems have built-in failsafe which have a maximum operating time for the pump.  If you have a larger tank and the pump cannot sufficiently fill your tank before that maximum fill time, it won't keep up with your tank's evaporation rate.

In most situations, the freshwater reservoir should be located right next to the tank and only has to move water over into the sump so head pressure won't be an issue. If you have a larger tank over 100 gallons, just do some research into the particular ATO to check the included pump's flow rate and see how it handles the fill time.  Some ATO systems like the JBJ don't include a pump so you can choose your pump separately.

Your final consideration should be the type of water level sensors.  A mechanical float or optical sensor is almost always a better choice than trying to set up a gravity-fed ATO.  Beyond that, both optical sensors and float switches can fail so choose something that has a good reputation and some kind of built-in redundancy. 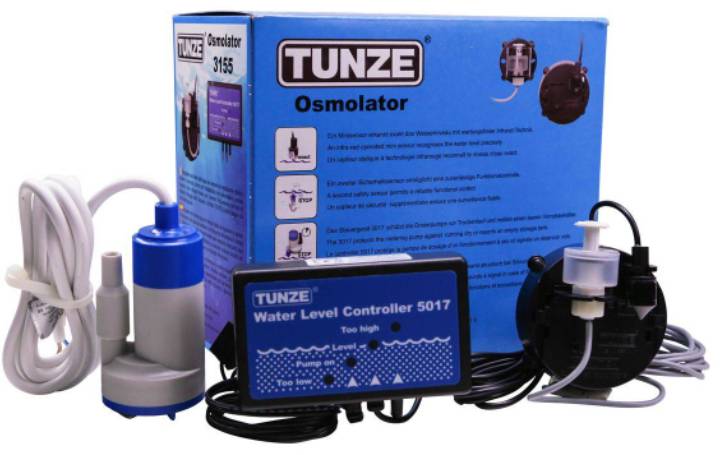 The Tunze Osmolator is hands down our favorite because it combines both an optical sensor and mechanical float for reliable operation. It comes with an audible alarm, status indicator LEDs, and you have the ability to adjust the pump speed or use the Switched Socket Outlet to connect the pump of your choice.