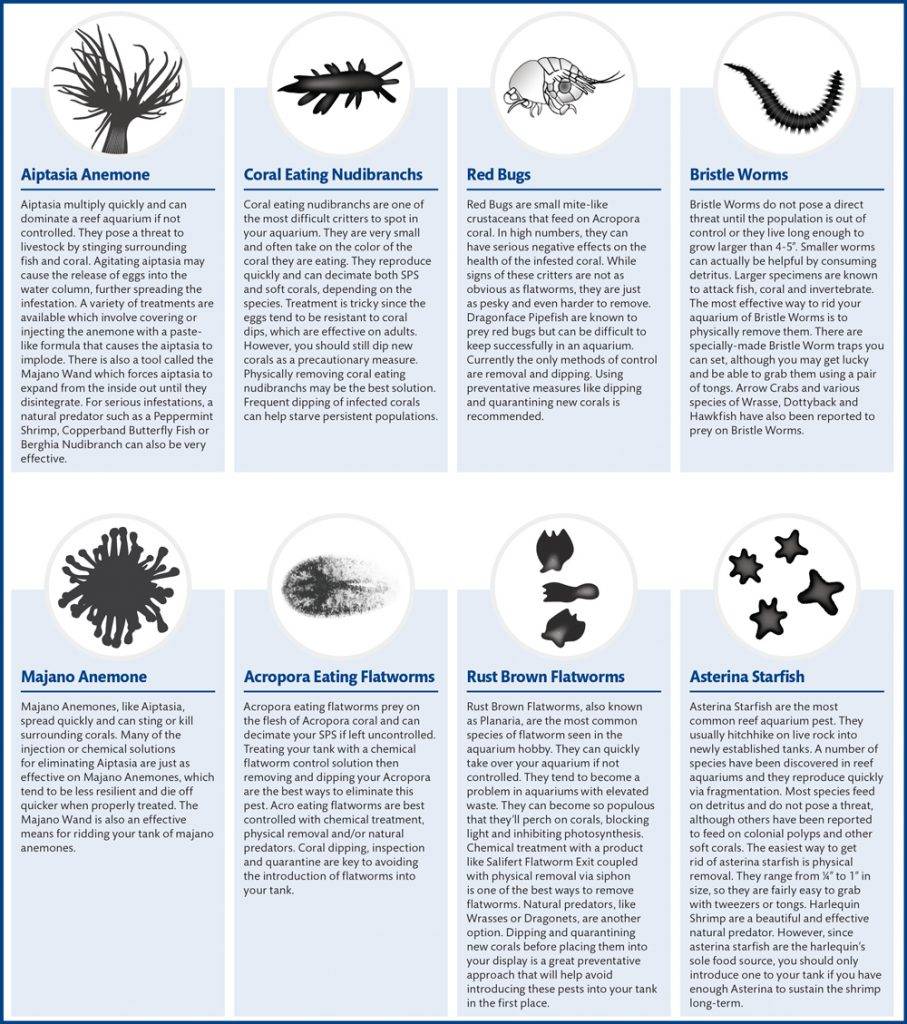 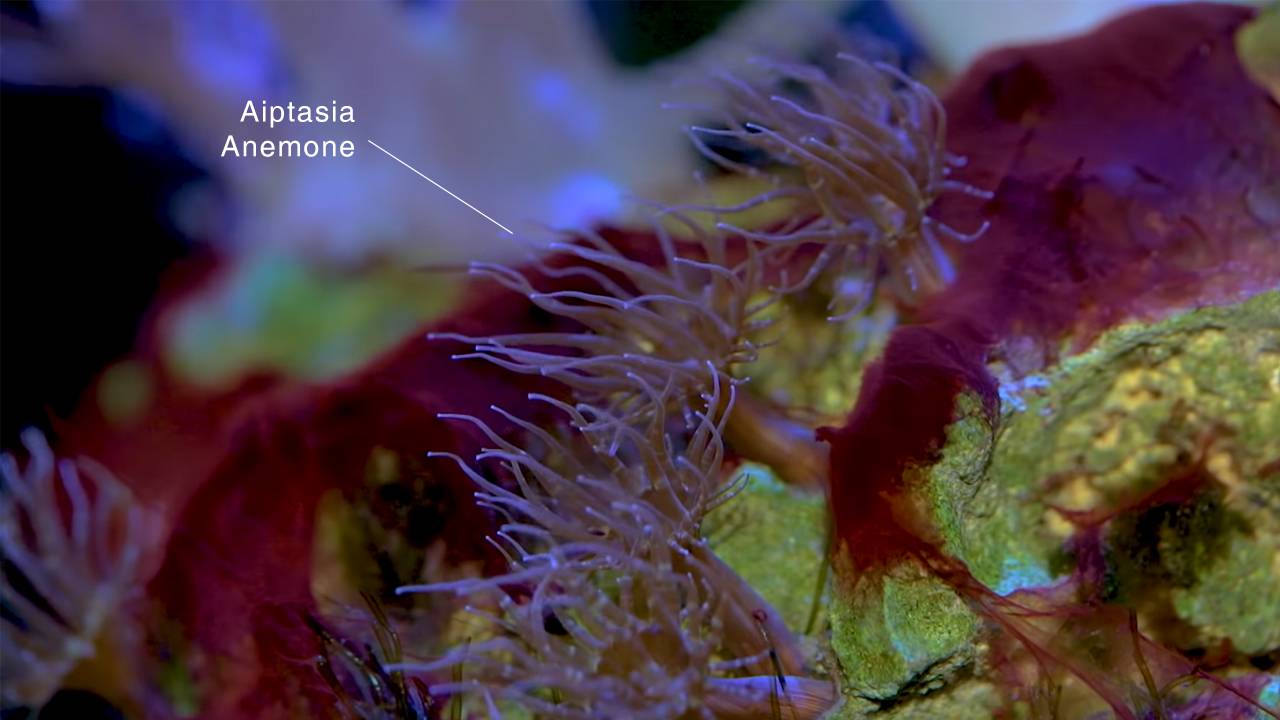 Perhaps the most dreaded hitchhiker and certainly the most common pest in saltwater aquariums containing coral. They can hitchhike their way into your tank on live rock but most often make their way via coral frags and plugs. Once in your aquarium, they spread like wildfire and can quickly take over the aquascape. These pest anemones pack a serious sting and can irritate, harm, or even kill neighboring corals, choking them out of their own real estate.

Aiptasia can be removed using select chemical treatments that typically involve covering and/or injecting the anemone with a thick alkaline (high pH) paste, like Frank's F- Aiptasia. This will work but requires some effort and repeat applications for persistent problems. The best approach is to kill them at first sight and don't let them spread. Once they multiply, it can be quite difficult to control a serious infestation.

Another approach to aiptasia control that works well is natural predators.  Thankfully there is a handful of fish and invertebrates that have been reported to eat aiptasia and can help control them in display tanks.

Berghia Nudibranchs and the Filefish are the most foolproof option, meaning they generally will find and prey upon aiptasia in your tank as long as they acclimate and survive. Peppermint Shrimp and Copperbands are more of a lottery in which sometimes they do, sometimes they don't.

While it is not something we recommend you do, there are some more experimental Aiptasia control ideas such as the use of a high-powered laser, electricity, or concentrated UV light. While all may be viable options, we have not yet seen safe and effective tools become available in the hobby. Every few years it seems we see a new device pop-up promising to end our Aiptasia woes for good. The facts are, these treatments still require a persistent application and run the risk of spreading the anemones just like you see with a chemical treatment.

There are a variety of nudibranchs that can hitchhike their way into your reef tank and eat your coral. Most commonly we see Monti-eating Nudibranchs and Zoanthid-eating Nudibranchs. In both cases, these tiny sea slugs take on the color of their prey and camouflage extremely well among the coral they are eating. You will often find them on the underside of a coral or at the base of a zoanthid polyp and they can be observed crawling around, eating the coral at night. You will notice tiny bite marks on the coral flesh or areas where the flesh has been eaten away with only white skeletal material left.

While the adult nudibranchs are susceptible to typical coral dips, the eggs will often survive the coral dip process.  This is why it is so important to closely inspect new corals upon arrival and remove them from frag plugs if possible. You can physically remove egg clusters if you fine them or just cut away the living coral.

Once you notice an infestation in your tank, it will reproduce and spread. Physical removal is required and will have an impact on the population, so long as you are persistent. Each and every night, take a red-colored flashlight to inspect your tank. Using forceps, remove the adult nudibranchs one by one, removing every single one you can find. Do this every day for 7-14 days and you can get rid of them, you just have to be persistent. If left to their own devices, they can eat and kill even large colonies of coral and will only die when their source of food runs out. 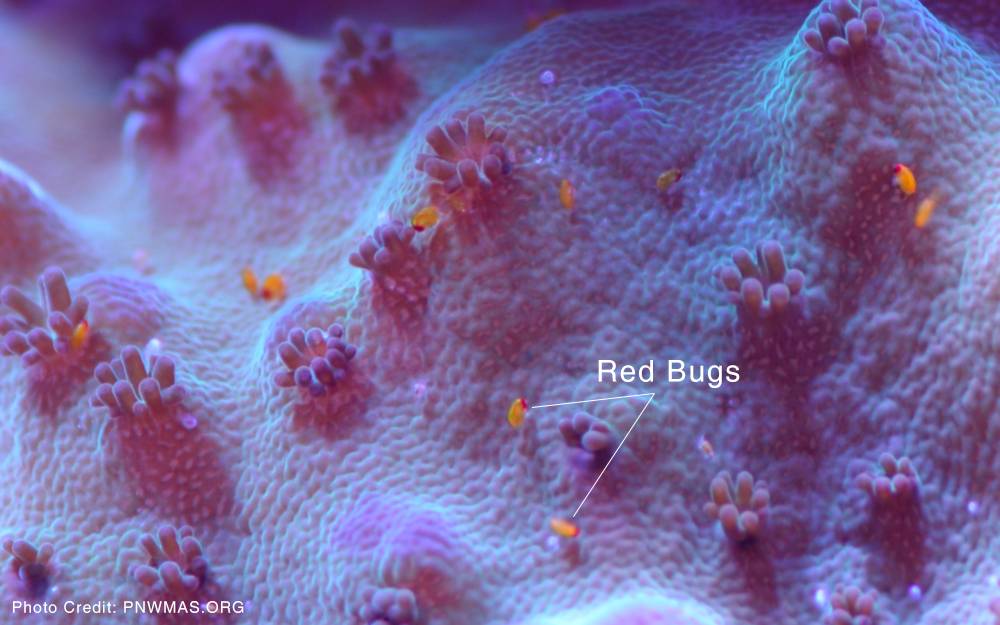 These tiny, mite-like crustaceans infect SPS corals and prey upon their flash. Being only the size of a pencil tip, they can be tough to spot and you most often notice the irritation and damage to your coral first. Only upon closer inspection do you start to notice the tiny, orange-red colored dots.

Proper dipping protocol will help reduce the threat of introducing Red Bugs into your reef aquarium.  A special DIY coral dip using a dog medication called Interceptor is the preferred treatment for Red Bugs. You have to visit a local veterinarian to obtain the medication but it does work exceptionally well at killing the red bugs.

Being the Interceptor medication is toxic to crabs, snails, and shrimp, treating your entire display aquarium directly can become tricky so it is best to simply dip the infected coral separate from your display. Then just repeat the process if necessary. 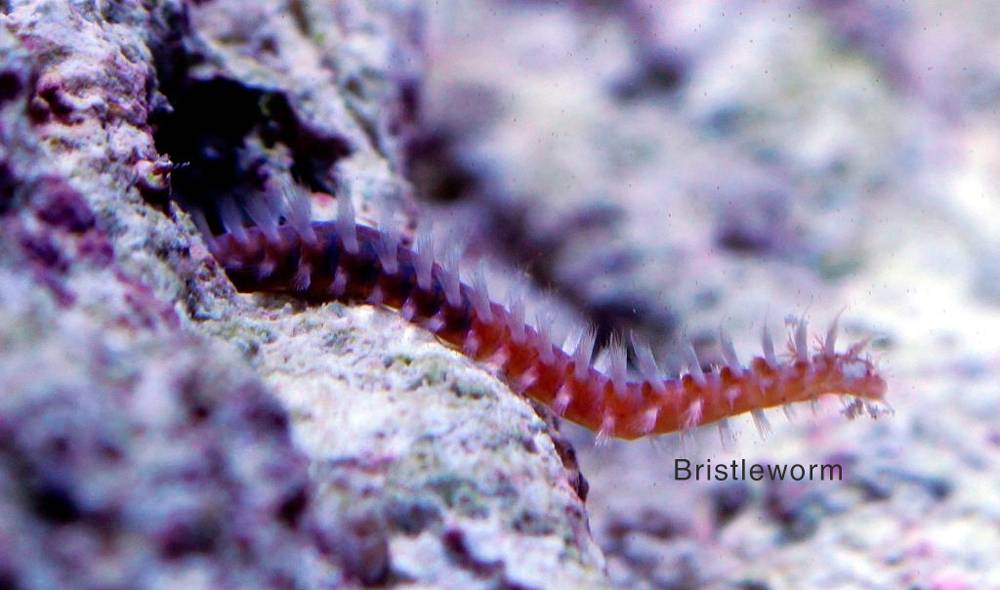 The less threatening Bristle Worms are simply more of a nuisance than a true pest.  These polychaetes feed upon detritus and decaying organic matter in the aquarium and will support your clean-up crew. They are quite prolific with a handful of different possible species being recorded in reef tanks. Most of the common species will not directly prey upon coral or kill fish, but they will move into clean things up should something perish.

Bristle Worms are most unsightly but in 99% of cases do not pose any kind of threat. You can remove them using forceps if you can catch them.  It is best to hunt them at night when they leave the protection of their burrows and rock dens to scavenge the tank. Bristle Worm traps are also highly effective and can be made from just a few dollars worth of materials.

Should the Bristle Worm population rise, it means the worms have more than enough organic waste to support them.  IN this case, focus on filtration and reducing the build-up of detritus and waste.  The worms can be manually removed and the population should balance itself based on the availability of food.

Note: Bristle Worms do have "Bristles" called chaetae that can stick into your skin and cause irritation. Don't touch the worms without gloves or forceps. 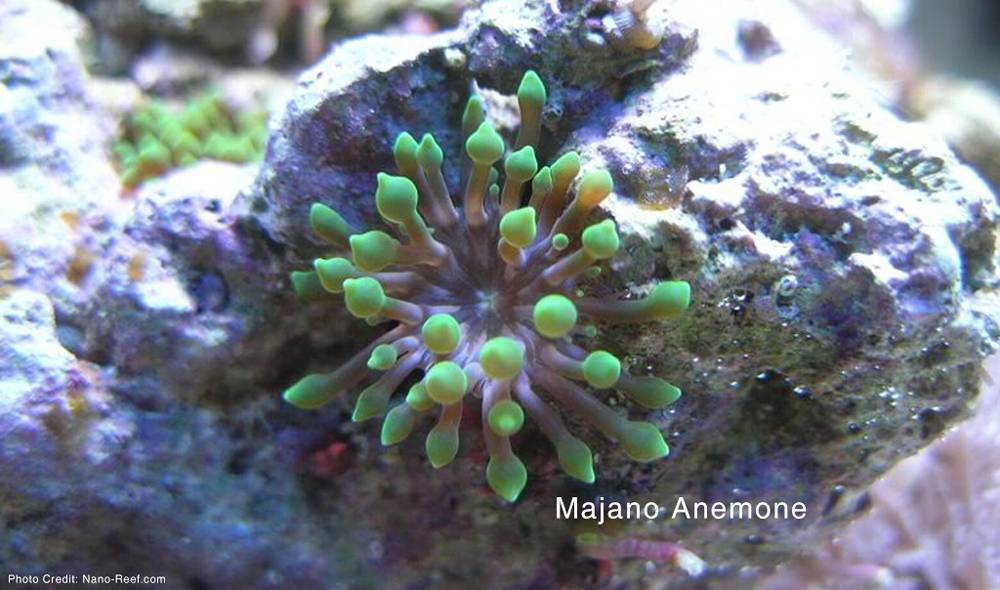 Similar to Aiptasia, Majano is a pest anemone that can be prolific and take over precious real estate in your tank, choking out your corals. They will sting and irritate corals to the point of death, then multiply on the rocks making it difficult for coral to survive.

Chemical treatments used for Aiptasia can be used for Majano Anemones in 99% of cases. Unfortunately, the natural predators known to Aiptasia, ARE NOT EFFECTIVE ON MAJANO ANEMONES. The one fish you might consider is a Bristle-Tail Filefish which can be problematic in a reef tank so it's a risky move. The best solution is simply the careful and persistent use of something like Frank's F-Aiptasia.

Right up there with the nudibranchs, these are some of the most dreaded coral predators. These flatworms often take on the color of the coral they prey upon and are difficult to see, being just a few millimeters in diameter. You will often notice damage and irritation to your coral before spotting these voracious flatworms. They start at the base of your SPS corals, working their way up so be sure to look closely should you notice your SPS are irritated.

Proper coral dipping can help remove adults flatworms from your new corals and help prevent infestation. They often hitchhike their way into your tank via coral frags and plugs and you do want to inspect frags closely for egg clusters. Should you spot the eggs, a simple coral dip may not be effective so separating the coral from the eggs is best, even if that means cutting the coral.

If you discover AEFW in your aquarium, it's best to remove and isolate the infected colonies into a separate aquarium, then dip them weekly over a 4-6 weeks time frame. This should prove to kill off the hatching adults and eventually take care of the entire population. Only after you can be confident the AEFWs are gone completely should you allow introduction back into your display.

Korallen-Zucht suggests the use of Flatworm Stop and Coral Booster in any reef aquarium containing SPS corals as both a preventative and treatment for AEFW. Flatworm Stop renders the coral flesh to be unpalatable for AEFW and will eventually starve them out while Coral Booster promotes healthy tissue regeneration during recovery.

Some Wrasses from the genus Halichoeres are known to prey upon flatworms, so you may get lucky but the effectiveness will vary wildly. You might recognize the Melanarus and Radiant Wrasses, both of which fall into this genus and may prey upon flatworms. 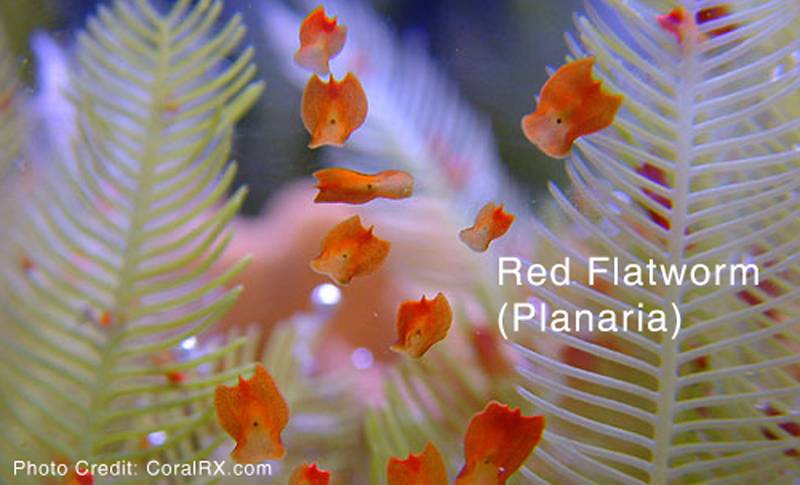 The most common flatworms encountered in saltwater aquaria, the Red or Brown Flatworms (more accurately "Planaria") do not prey upon coral flesh like AEFW but still pose a threat. Planaria reproduce rapidly in a closed ecosystem and will cover the surface of corals and rock. If left unchecked, the flatworms will smother corals and block critical access to light and food. The coral becomes irritated and stressed to the point of death.

These guys tend to show up in aquariums with a healthy amount of detritus and lack of maintenance is often involved. Thankfully, they can be controlled via a physical removal alongside a reef-safe treatment using Flatworm-Exit from Salifert or Flatworm RX from Blue Life.

That being said, these Flatworms will release a toxin when they die inside your tank.  This is why it is critical to siphon as many of the living flatworms out of your tank for 5-7 consecutive days leading up to the chemical treatment. This will reduce the population and the resulting toxin that gets released into your tank. Immediately following the treatment, siphon out any leftover flatworms along with a large water change and run carbon to remove residual chemicals and toxins.

Some species of Wrasse and Dragonets are known to eat Flatworms which can be a great preventative measure. Dipping of all new coral will help reduce the chances of introducing any coral pest, including Planaria.

These guys are probably the least threatening on our list, also super common.  People often debate their worthiness but here are the facts.  Asterinas hitchhike into the tank and there are a few unique species documented in reef tanks. They tend to be harmless, eating detritus and climbing amongst the glass and rocks during the nighttime scavenging for food. They generally don't bother coral unless the flesh is dead and decaying, this is when you might see them eating some zoanthids or soft coral flesh. This is probably the reason you see hobbyists reporting them as "eating coral".

For the most part, physical removal can help reduce populations should you become worried about them. They can explode in population when there is enough food to support them but since they don't move fast, you can easily pluck them out of the tank at night time to drop the numbers to manageable levels.  Most hobbyists do not worry about their presence in the tank.

They are interesting in that they can reproduce via fragmentation, just like coral.  Break one in half, both halves will grow into Asterina and slowly shape into 5 legged stars. Harlequin Shrimp are voracious predators of sea stars and Asterina act as a great food source. Adding a Harlequin to your tank will make quick work of your exploded Asterina population, just be prepared to feed the shrimp after it has exhausted the stars naturally growing in your tank.