Rod's Food is well known for it's high quality ingredients and feeding response in the tank. They won the Marine Depot Best Food Award in 2013 and 2014. We got a chance to catch up with Rod Rod Buehler  in between all the reef shows he does and his busy schedule. 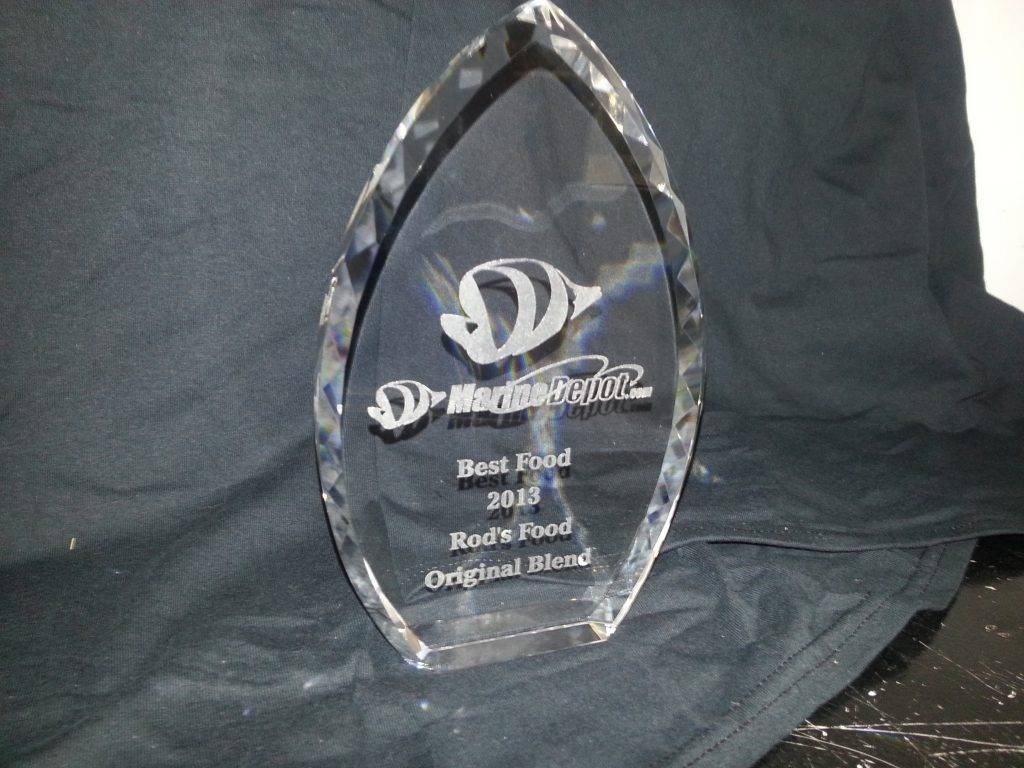 You were the first to bring out fresh whole ingredient gourmet food for the reef. What goes into your blends that makes the fish go crazy for it?

We use so many high quality ingredients in our blends making this question difficult to answer. I want to say that its the oyster and the amount of them that we use because it will help justify the price we pay for fresh oysters. The fact that we use whole animal when possible also plays a role. Shrimp brains are not only nutritional, but also tasty. 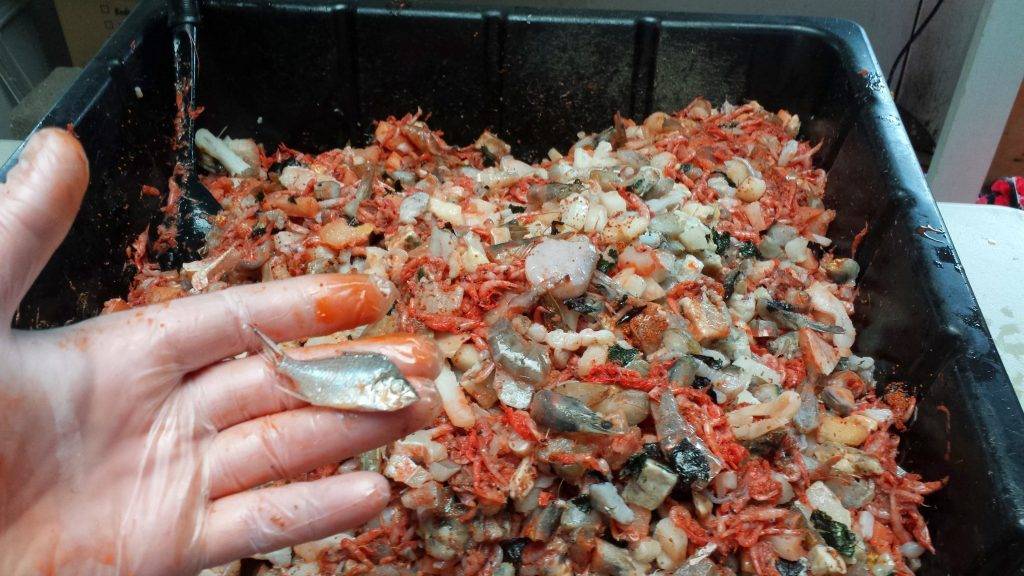 Why is it important to use human grade ingredients in Rod's Food?

Fresh human grade ingredients are much more nutritious than dried/ground "Fish meal" and fillers (soy) found in many commercial feeds - especially those processed overseas. Fresh human grade ingredients also helps to keep our tanks cleaner when used properly. Fish will process everything that is nutritional (not fillers). Anything else will pass through their system as waste. Everything in our foods is nutritional foods so fish will process more and pass less. But, once a fish reaches there "nutritional goal" for the day - everything will pass through, and this is where some run into problems. Our foods are so tasty, the fish will want more and act hungry which creates a natural instinct for us to feed them more, even if its not needed. With our foods we can feed less and the fish will remain robust and healthy. They will pass less - resulting in a cleaner tank. The food will last longer which will leave more $$ on hand for that next purchase.

Once your recipes are set, do you tweak it or experiment with different ingredients?

In the infancy stages (90s) new ingredients would come to market that were perfect fits to our food. They did evolve as my hobby evolved from being a guy with a few tanks to being a fish breeder to being an anemone guy, to being a coral farmer. When we did release them to other stores, we tried to leave them alone, but to a small extent - yes we do change or have changed things a bit. For instance - Cyclop-eeze used to be in our products but is no longer available so we found different coral foods/pods. We have been playing with some ingredients that will boost fat (DHA/EPA) content. I'm not sure if we will change current products, or most likely create a new product.

In terms of nutrition, how does Rod's Food compare to other frozen foods available in the hobby?

I try to not pay too much attention to what others are doing, but I am confident that our foods are much more nutritional that some of the old school foods. We were the first to release blends containing ultra fresh human grade seafood. Since - there have been quite a few to try to emulate what we do. Some have done a pretty good job of copying, so I would have to guess they have a pretty good nutritional profile. Many of them only use cast off bits, pieces, and tails where we try to use whole animal so I am confident in saying our products are a more well rounded diet

Rod's Onyx was the first designer breed of Clownfish, how did that come about? Is the strain still being bred today?

Onyx isn't really a "designer" clownfish. It is a natural variant but not many (not any) could get the black coloration to reproduce. I was very fortunate to obtain a great pair that produced A LOT of babies that showed color at an early age.  When I first started raising them, A large scale breeding facility told me that I would never get any black from them because "they have been trying for years" and were unsuccessful. The pair I had sort of set the standards for an "Onyx clown". I did not name them "Rod's Onyx". It was the people wanted the clowns that my pair produced who coined the term.

My male that was dubbed a "super male". Even his pectoral fins were nearly  completely black. After Momma clown disappeared - I eventually gave my male to another local breeder. He - now she - is still putting down viable nests at well over 20 years of age. Probably closer to 25 but I didn't keep records in the early stages of my hobby.

What has changed between coral farming in the 1980s when you did it, and today? How did you ship SPS back then?

There weren't many (any) that were actually farming coral in the 80s. I was farming/fragging in the mid to late 90s. So much has changed. We were mainly farming/fragging SPS corals and soft corals and we didn't have quite the diversity of corals to farm. There weren't so many names (many cases no name at all)l for the same species of coral. We knew that the "Magenta millie" might look different in another system.

We didn't get into the hobby to decide a year or 2 later that we were going to be a farmer to recoup costs. We started farming because corals we outgrowing their tanks/space. I had an Acropora yongei with hundreds of branches, that encrusted 3 sides of a 40"x 30" tank.  When I helped Jose Dieck break down his huge reef tank, I don't think there was 1 coral of 30+ that would fit into a 5 gallon bucket - they were all bigger than basketballs! We have seen Sanjay Joshi in pictures holding corals nearly as big as he is. Letting them grow to near exponential growth would allow you to take many frags from an area and you would never know they were gone.  Next week  - frag a different area.  By the time you make it around to the beginning, the initial spot would be re-grown.

Frags were much bigger and much cheaper, but again we didn't have the diversity, and we weren't really looking at it as a business but instead - part of the hobby. Yes, it sometimes led to business, but for most, it wasn't why we started fragging/farming. Sometimes some species - such as A.yongei - would ship with very little water. The slime produced would protect the coral for shipping. Others were often attached to a small piece of styrofoam and floated upside down in a bag. 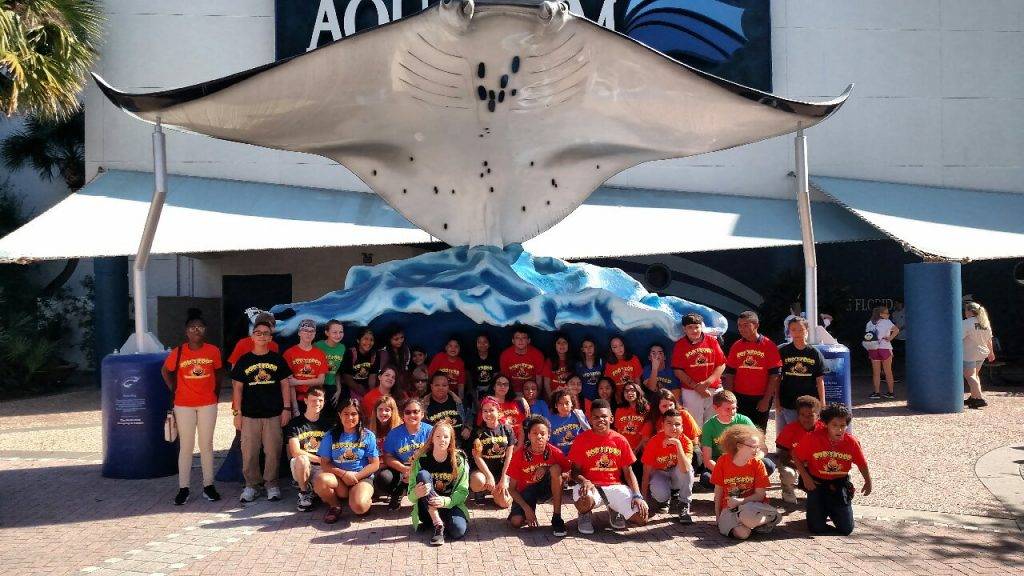 Rod's Food supports coral restoration projects, clubs and also school programs. Can you touch upon these? How do you support schools?

Educating youth goes a long way in drawing newcomers to the hobby, which in turn educates them on our environment. We often donate food to schools/classroom projects to help with expense and to help them succeed. We also help with questions they may have by sharing experience. 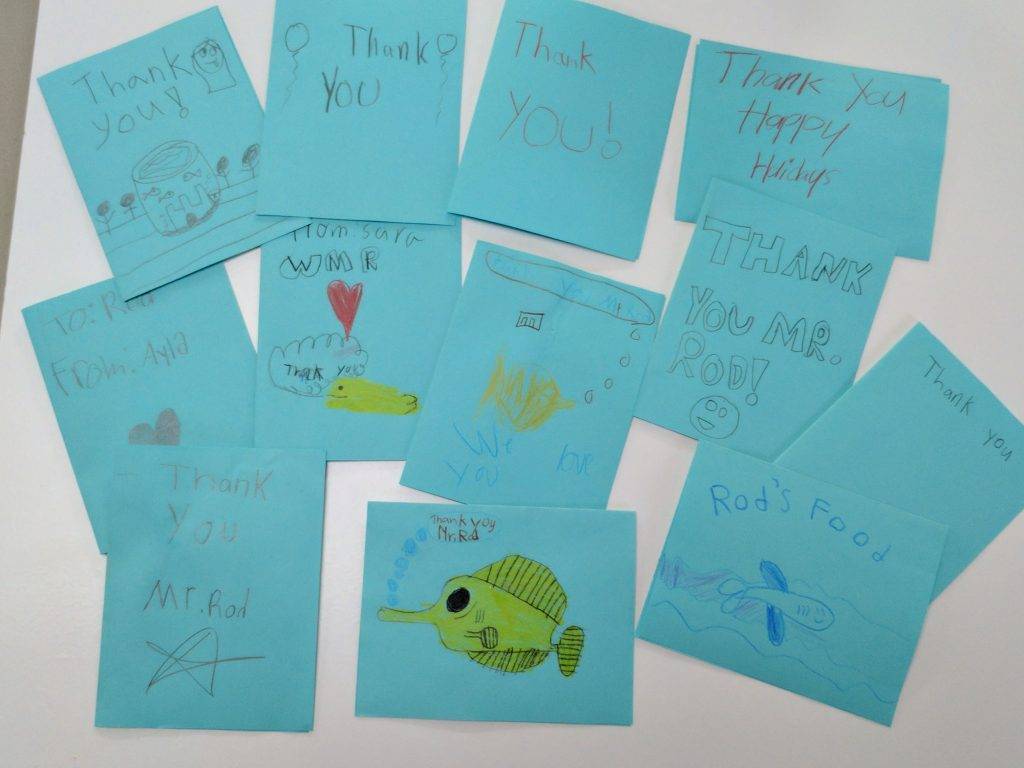 Thank you notes from young students.

How do you support conservation/restoration projects?

If our foods will help conserve and restore reefs in any way - we are more than happy to donate foods to assist.

How do you support clubs and reef societies?

We support clubs and societies by donating products to raffles which helps financially with operating costs.  Clubs are an important source of education and a source for drawing new hobbyists. 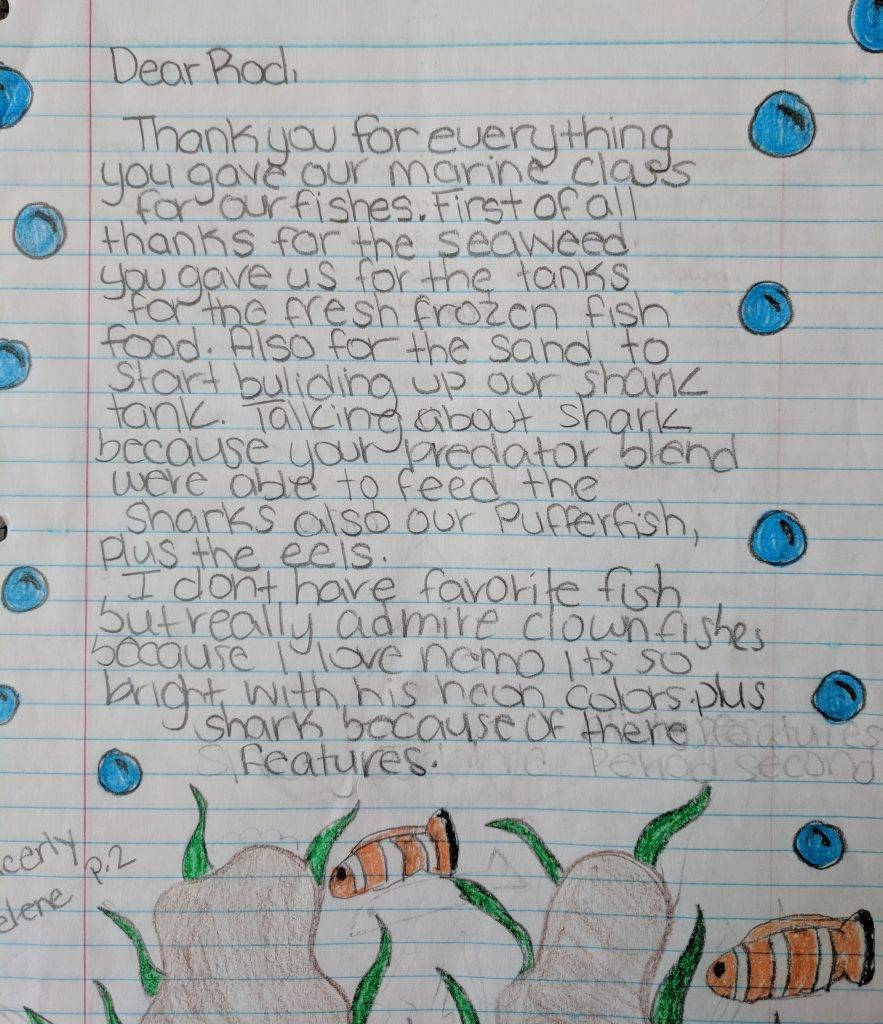 One of many letters received from CLMS

What is different about the freshwater blends that you offer?

The idea behind the freshwater blends is the same with our saltwater blends: use as many fresh - natural ingredients as we can. Yes, there are a few ingredients that we use that are not "natural" to the fish we are feeding, but for the most part they are. We also use our unique astaxanthin and other carotenoids in all of our blends to keep the fish vibrant and colorful.

You have a unique retro themed labeling on your products - what influenced it?

I can't take all of the credit for our labels. A very good friend that like to play with Photoshop designed some posters and similar for Rod's Reef way back before Rod's Reef became Rod's Food. Some of those designs transferred through the business change. Besides - I am from that time period making me naturally retro. When creating the freshwater labels, we experimented with different fish on the label, but nothing worked. Momma clown has to be part of the logo/label.  I do have some awesome ideas to switch up the labels on the freshwater blends, but I haven't had the time to produce them though. Soon - hopefully soon.