Ep: 2 What Are the Five "Uglies" in the Ugly Stage and Can We Avoid Them?

When we imagine the diversity of a natural reef ecosystem, we often default to the variety of corals, fish, shrimp, snails, and other invertebrates that we can visually see with the naked eye. After all, seeing is believing. What we often neglect or at least don't visualize are the things we cannot see, the community of microscopic animals and photosynthetic organisms that compete for resources on the reef and make up the microbiome.

The microbiome is equally if not more important than the macro community and when attempting to recreate a miniature reef ecosystem inside of a glass box it is critical we recreate this microbiome in such a way that balance exists. When the microbiome is out of balance, we can see "the uglies" start to take over.

The Biome Cycle experiments were created to explore the methods by which reef aquarists can create a naturally stable and balanced biome from the start. Through our test tanks, we discover ways to avoid or prevent some of the most challenging experiences for hobbyists by exploring the "5 uglies" and what makes them tick.

These are those unsightly, pesky, and incredibly annoying pests that show up during the initial maturation process of a new reef aquarium.

Understanding these pests unlocks the tools we need to avoid and overcome them in our aquariums. Throughout the series, we develop congruent themes that apply to all of the uglies.

"Know thy enemy and know thy self; in a hundred battles, you will never be defeated" - Sun Tzu 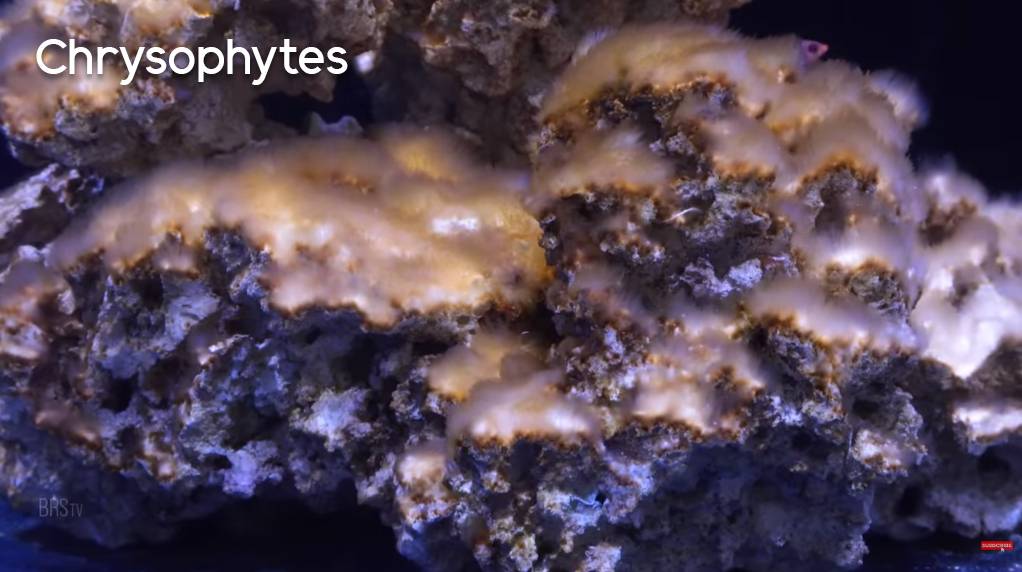 Most often called "gold or golden-brown algae", there are thousands of different types of chrysophytes. They take on a variety of forms in new aquariums and can show up as light-colored fuzz, long filaments, or bulbous colonies of light brown growth.  Their cells have flagella meaning they are motile and will spread throughout your entire tank in a hurry.

Chrysophytes are a kind of algae meaning they are photosynthetic and thrive under light but what makes them especially unique is their ability to turn predatory. They can actually acquire nutrients by preying on microbes when light sources are not sufficient. It is rare for chrysophytes to share the tank with other pests and they tend to show up in only the most sterile approaches to cycling a tank (dry rock and dry sand) and when nitrate and phosphate are not abundant. Presumably, this ability to sequester nutrients via photosynthesis and predation allows for their prevalence in this environment.

Nutrients - Nitrate and phosphate play a major role throughout the Biome Series. Why are nutrients, or the lack thereof, both the cause and solution to many of these pests? 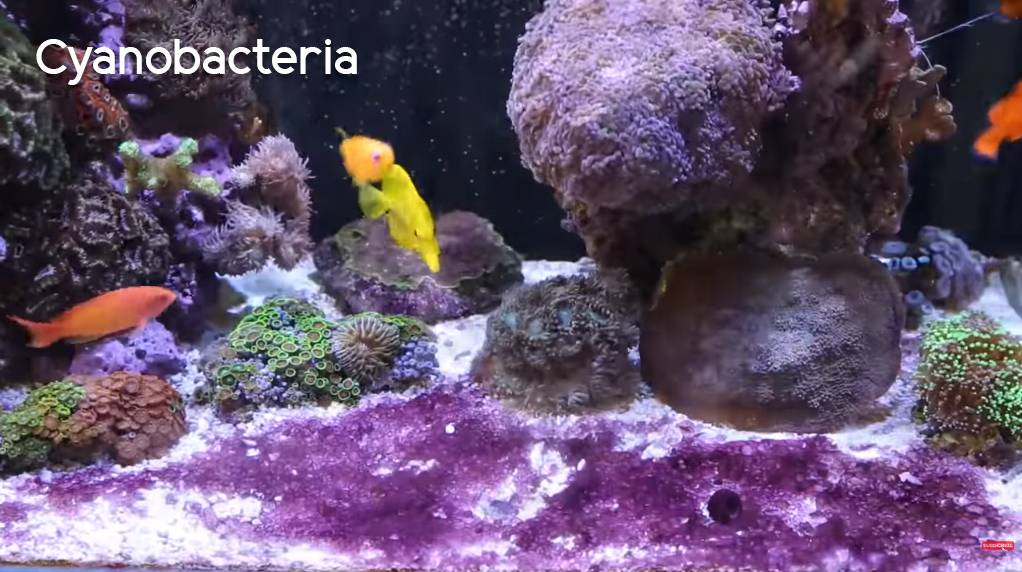 Most hobbyists become familiar with cyano at some point which emerges as purple to deep red slime that coats the sand bed and rock surfaces in a saltwater aquarium. Microscopically, it's a network of tight yet randomly woven filaments that easily crowds out the competition.

It is photosynthetic bacteria meaning it does require light to survive and thrives in areas of lower flow. The low flow not only means the bacterial film cannot be blown away as easily but also happens to be where decaying organic waste settles as well. There is a long-standing belief that the direct cause of cyanobacteria is readily available nutrients from poor tank maintenance but this really only seems to be partially true because hobbyists can rarely get rid of cyanobacteria by simply reducing nutrients alone.

Competition - Can a healthy bacterial biofilm outcompete cyano? Will sufficient flow and an effective method of filtration along with a healthy biome prevent cyanobacteria altogether? 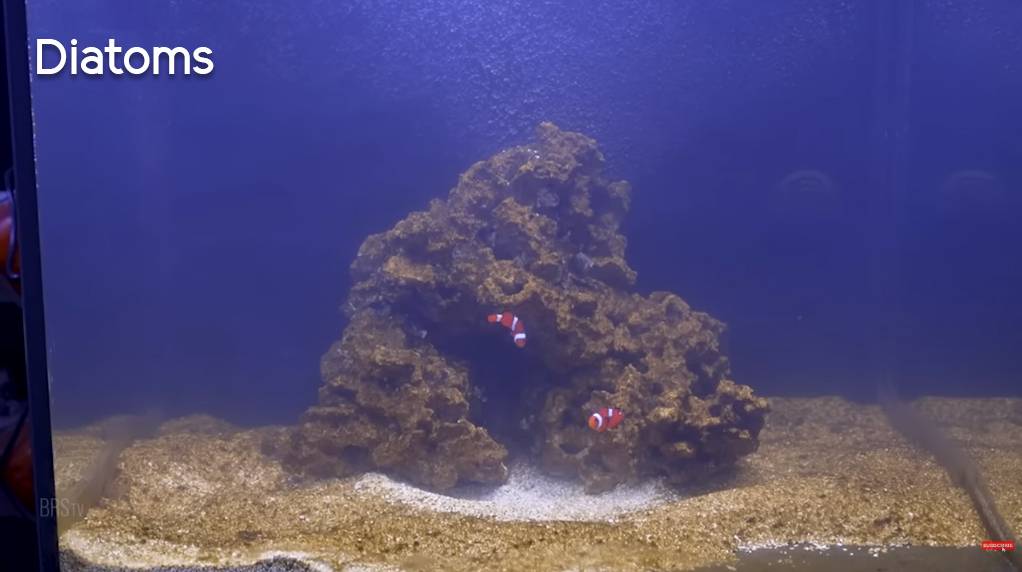 These single-celled algae are highly competitive and show up as a light brown coating or "dust" that coats the surfaces inside your tank. They are often short-lived, coming and going inside of 7 days but can sometimes be much more explosive and stick around for much longer and in higher numbers.

Diatoms reproduce quickly and rely upon nitrogen, phosphorous, and light to survive. They have a unique silica-based cell wall which has led some hobbyists down the road of limiting silica in the aquarium but just like reducing nutrients, this approach is often not 100% effective for eliminating a pesky diatom bloom.

While diatoms can outcompete most anything in your tank if given an opportunity, they are also easy prey for a variety of other microorganisms including copepods!

Redundancy -  Beating diatoms may be less about starving them of nutrients and more about maintaining a redundant biome where competing organisms exist in harmony. 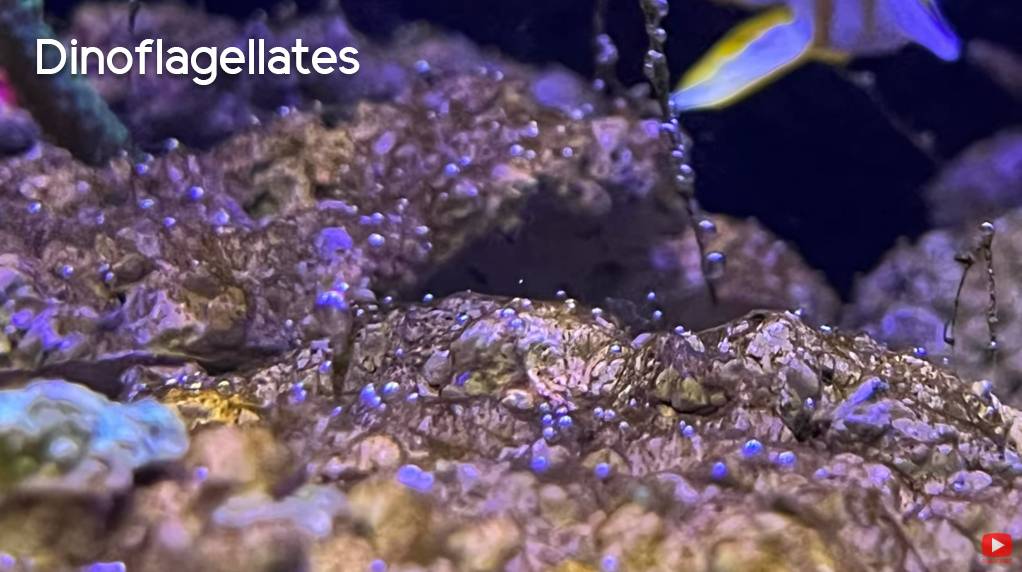 There are thousands of different types of dinoflagellates and the ones that show up in a saltwater aquarium are all quite difficult to overcome. The different types can take on different appearances but for the most part, they will show up as a brown, bubbly, snot-like substance that covers the surfaces inside your tank.

Dinoflagellates are dreaded by hobbyists because the solution that works for one species, may not work for another. Some dinos are photosynthetic, others are not. Some are motile while many others are not. Most hobbyists that overcome dinoflagellates employ a multipronged attack that focuses on the resources rather than eradicating the dinos themselves. Bacteria additives, biome sharing, a blackout period, and UV sterilizers are all effective treatments for dinos and it's a combination of these solutions that most often prevails.

Cyano, diatoms, and dinos are easily confused and commonly misidentified by hobbyists because they do look somewhat similar and show up in seemingly similar situations. With that in mind, the solution to these pests may be more about prevention rather than eradication meaning proper identification will never be required. Maintaining multiple layers of protection via a healthy biome that doesn't allow for any one pest to prevail. 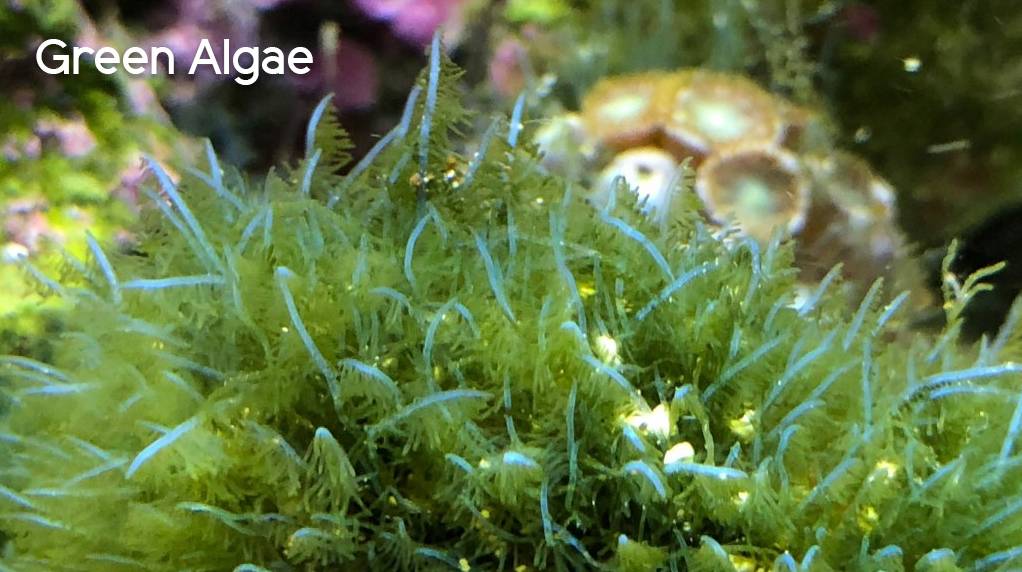 Hair algae, bubble algae, turf algae, bryopsis - all of these fall under the umbrella of green algae and have plagued aquarists for decades. While they are all unique in some ways, they share many of the same traits; green algae are photosynthetic, have very similar cell structures, and have almost identical environmental preferences. Common advice revolves around the physical removal of the growing algae, starving the aquarium of nutrients, and adding clean-up crew animals like herbivorous fish and invertebrates.

While the steps for eradication can be effective, the biggest part of avoiding a serious infestation of green algae is preventing it from dominating your aquarium.

It is important to understand that green algae must be introduced into the aquarium in order to show up. It doesn't just materialize out of thin air which brings us to the conclusion where we discuss prevention and provide you with 5 easy ways to avoid an annoying outbreak of pest algae altogether.

Successful prevention is more than a handful of hermit crabs and a few snails, it requires a network of organisms in addition to a disciplined approach to establishing the aquarium that will produce the desired results.