BRStv Investigates Light Obstruction - Which of These 50 Reef Tank Lights Cut Through the Shadows?

The obstruction of light occurs in your reef tank when light that enters your tank from above is blocked by corals and rocks, consequently creating shadows. The problem with these shadows is that corals need light energy to survive and living in a shadow is no place to thrive for animals that rely on photosynthesis. If neighboring corals and or rock structures constantly obstruct light from a portion of a coral, the coral suffers and will not be living to its full potential in your reef tank. 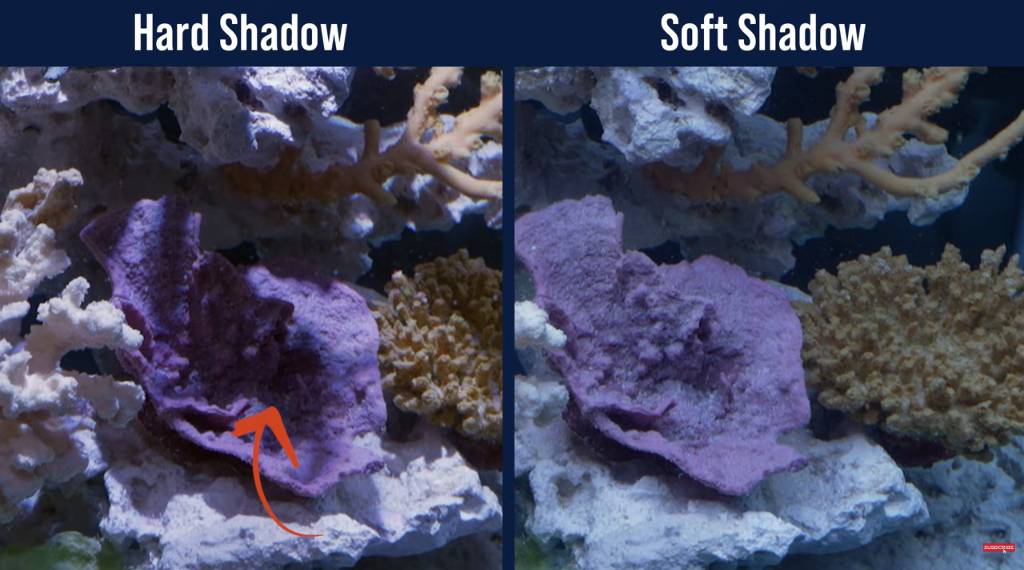 The severity of these shadows can vary and some types of reef tank lighting are better than others when it comes to creating these shadows. For example, a classic T5 fluorescent fixture creates a very widespread blanket of light that wraps objects in light from many different angles which results in minimal soft shadows. An LED pendant that uses a dense cluster of LED diodes casts a cone of light from one angle which results in very harsh shadows.

With the widespread use of LED lighting over our reef tanks, these harsh shadows are more prevalent in our aquariums today than ever before. 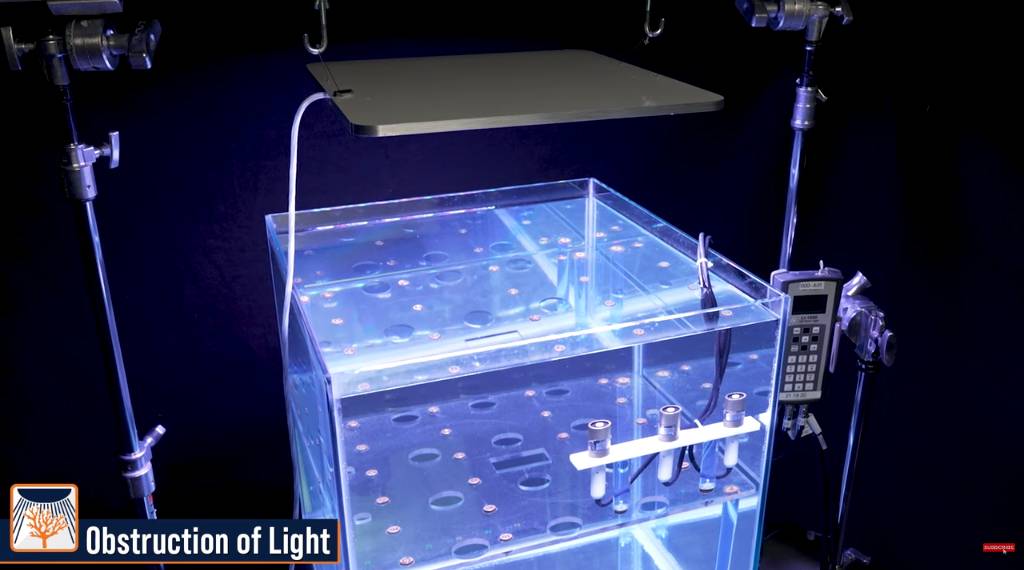 For this BRStv Investigates experiment, we tested over 50 popular lighting solutions and documented them using this special light obstruction test. Each of the lights was mounted optimally above a 24" cube aquarium that contained a unique light obstruction apparatus that was purposefully designed to create multiple types of shadows with varying degrees of light blockage. 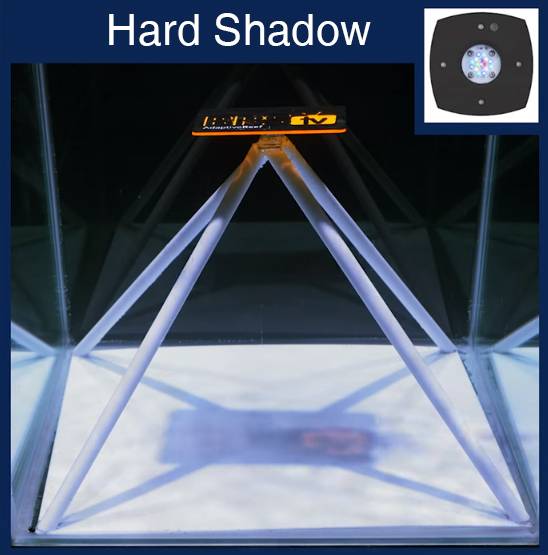 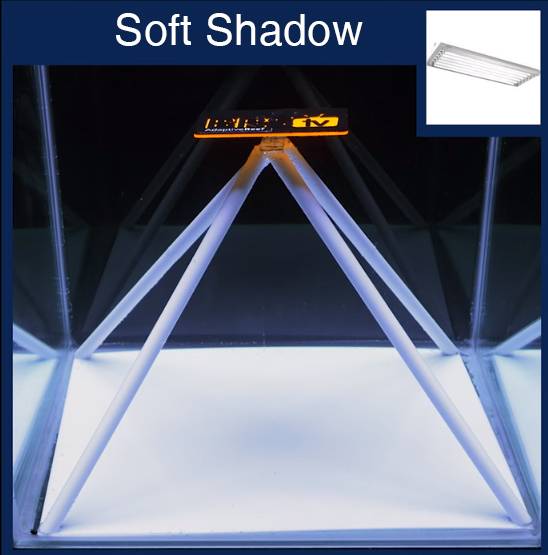 The harsh shadow in the middle is created by the acrylic plate, secondary shadows occur directly under the legs and much softer tertiary shadows are created by light reflecting off of the glass. The idea here is to mimic the variety of organic structures and different angles that would likely occur in your reef tank.  You can see above just how dramatic the difference can be between two different light fixtures. 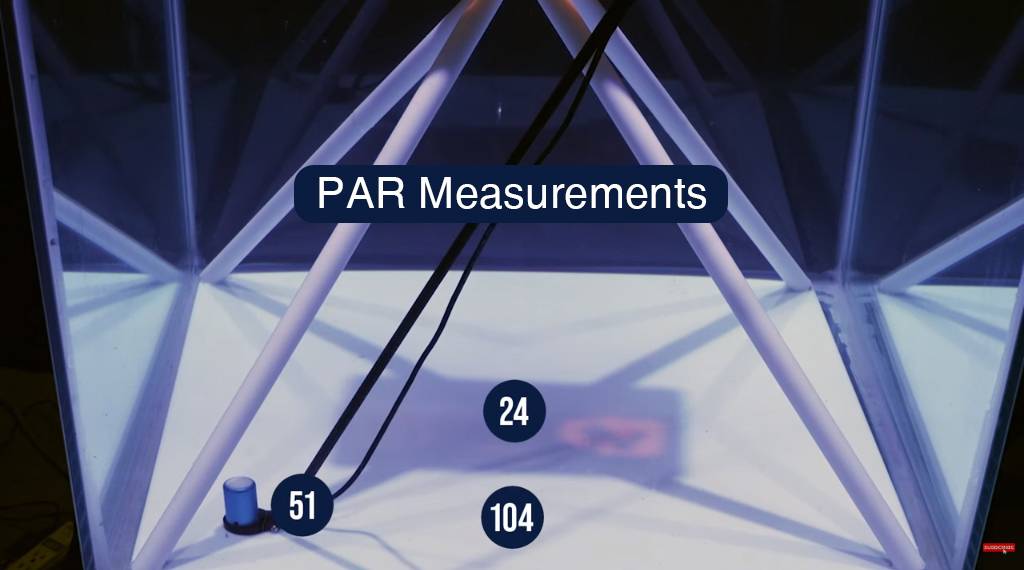 PAR Values in the center harsh shadow can be as much as 70% less than what would otherwise be reaching that depth of the aquarium. Needless to say, this kind of reduction in light can be detrimental to your corals; this is especially severe in the case of medium to larger-sized SPS colonies where they not only shadow neighboring corals but also begin to shadow themselves at the base of their own branches.

What Type Of Lighting Is Best At Reducing Shadows?

We documented a total of 52 unique lighting solutions which included everything from a single AquaIllumination Prime and AquaMixx Prism II to much higher-end Radions and even hybrid-style fixtures. Some of the results were quite predictable while others were somewhat surprising. Ultimately, we came away with four key takeaways that grouped the lights into different categories.  (Click images to enlarge below) 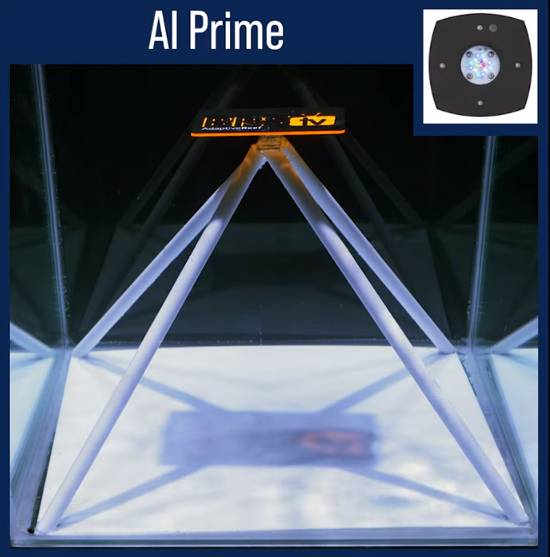 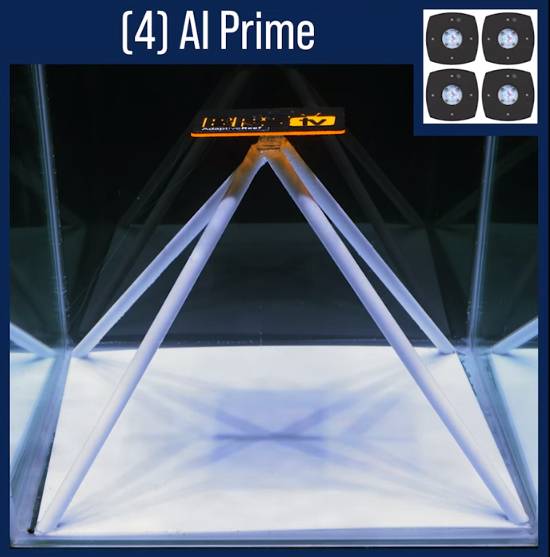 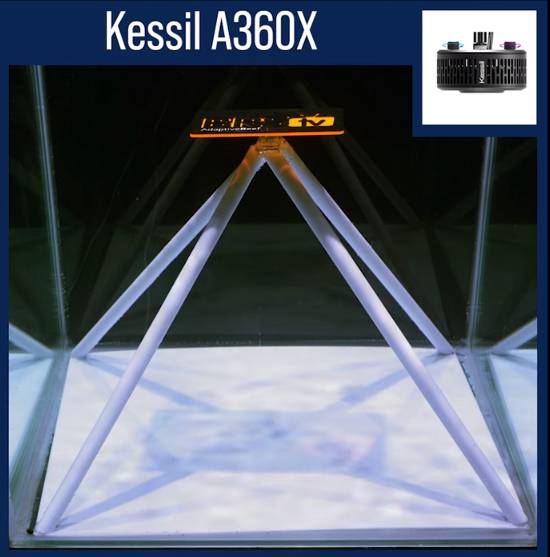 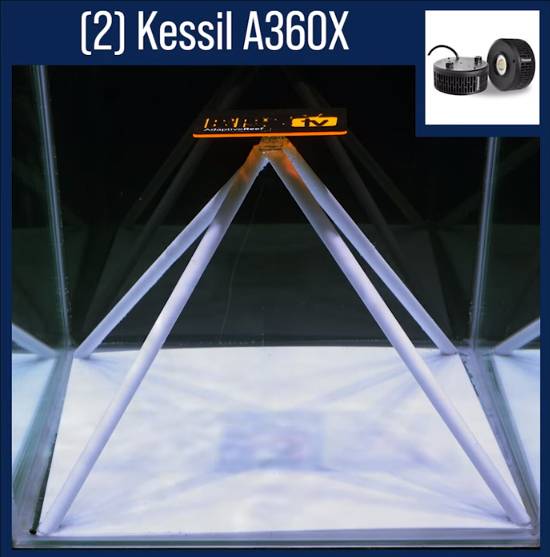 Small Focused Light Sources with densely packed LED diodes produce the harshest shadows. You can improve performance by using multiple overlapping compact light sources and spreading them out, but you typically end up creating even more,  yet less aggressive, shadows. 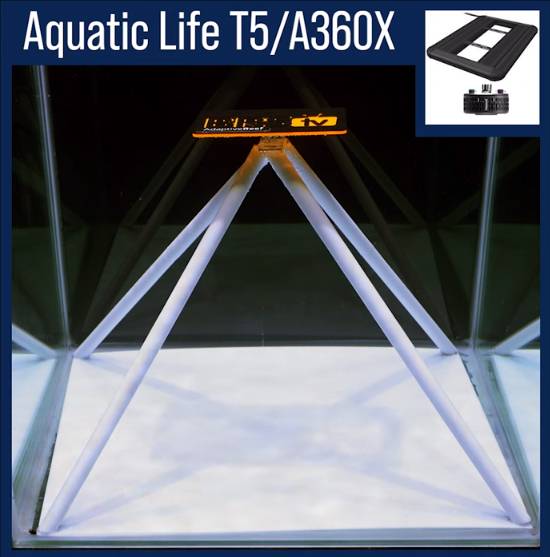 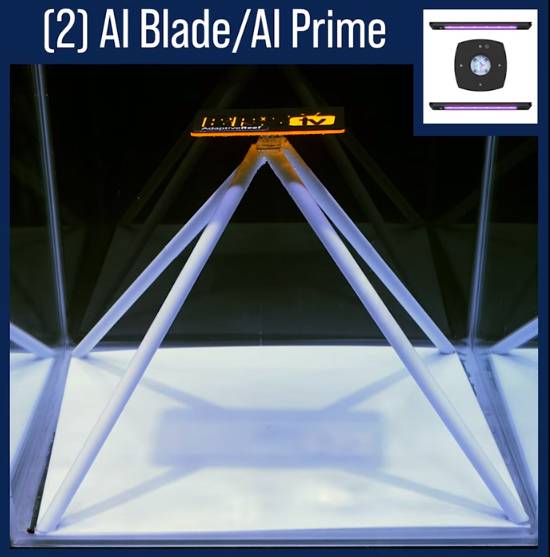 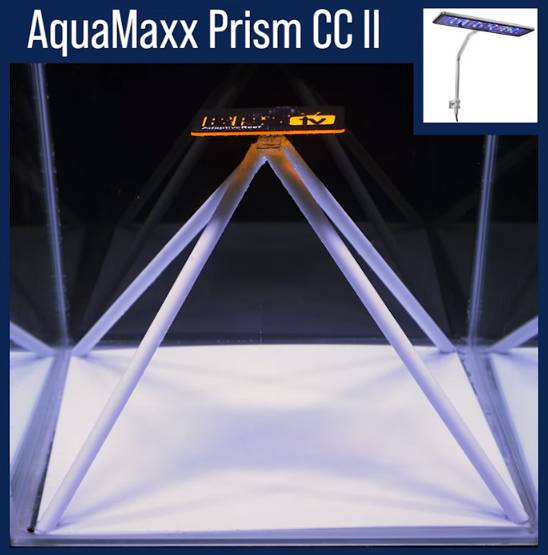 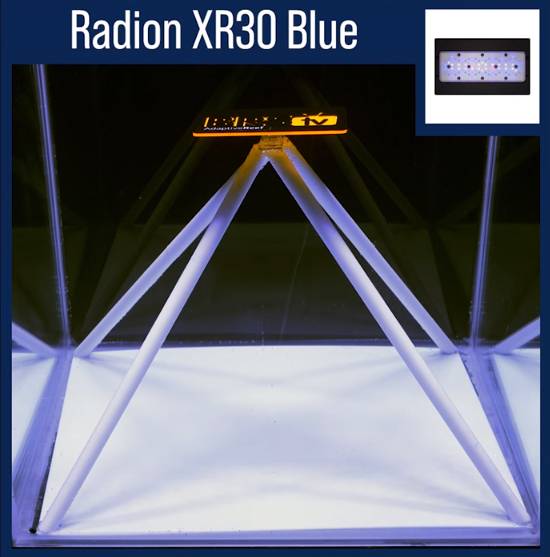 Medium Sized Modules with wide lenses produced decent results, certainly much better than focused/compact light sources. This is the best balance in terms of performance while still being able to take advantage of a single low-profile fixture. 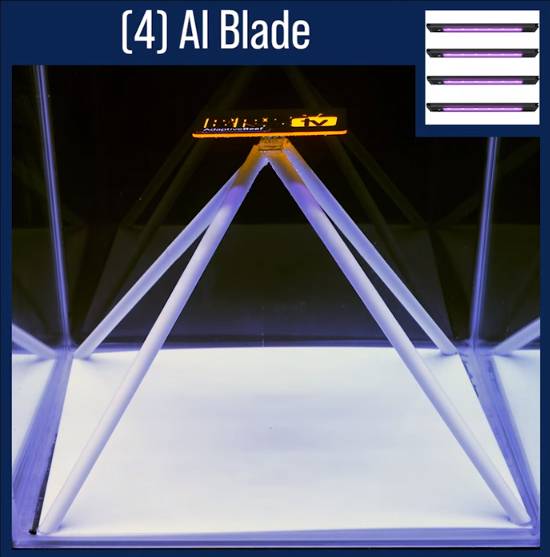 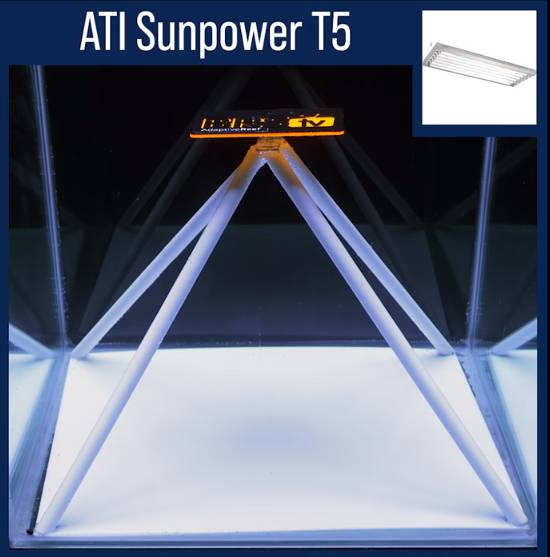 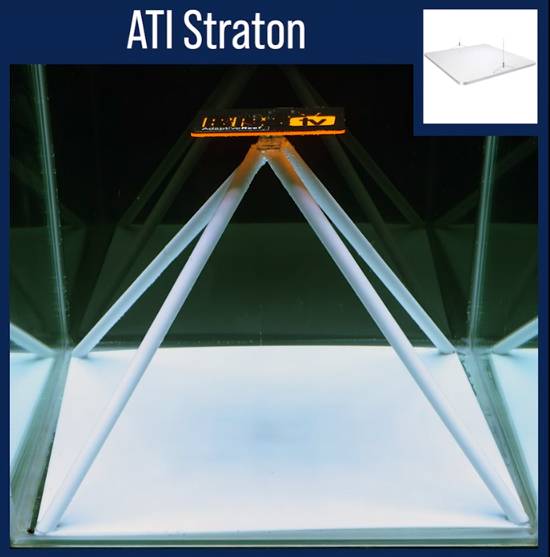 Large Panels or Multiple Strip Lights that are physically larger than the objects they are illuminating produced the best results, hands down. This is because they are able to emit light from many angles, wrapping the corals in light from all directions.