Are you curious about the best approach to cycling and maturing your new reef tank? We are too and have set out to find answers about what good looks like and explore the various things we can do to produce the best possible results in maturing reefs.

This episode marks the end of phase 1 in our microbiome cycle experiments and we will be looking at the Aquabiomics test results from tanks #9 through #12. 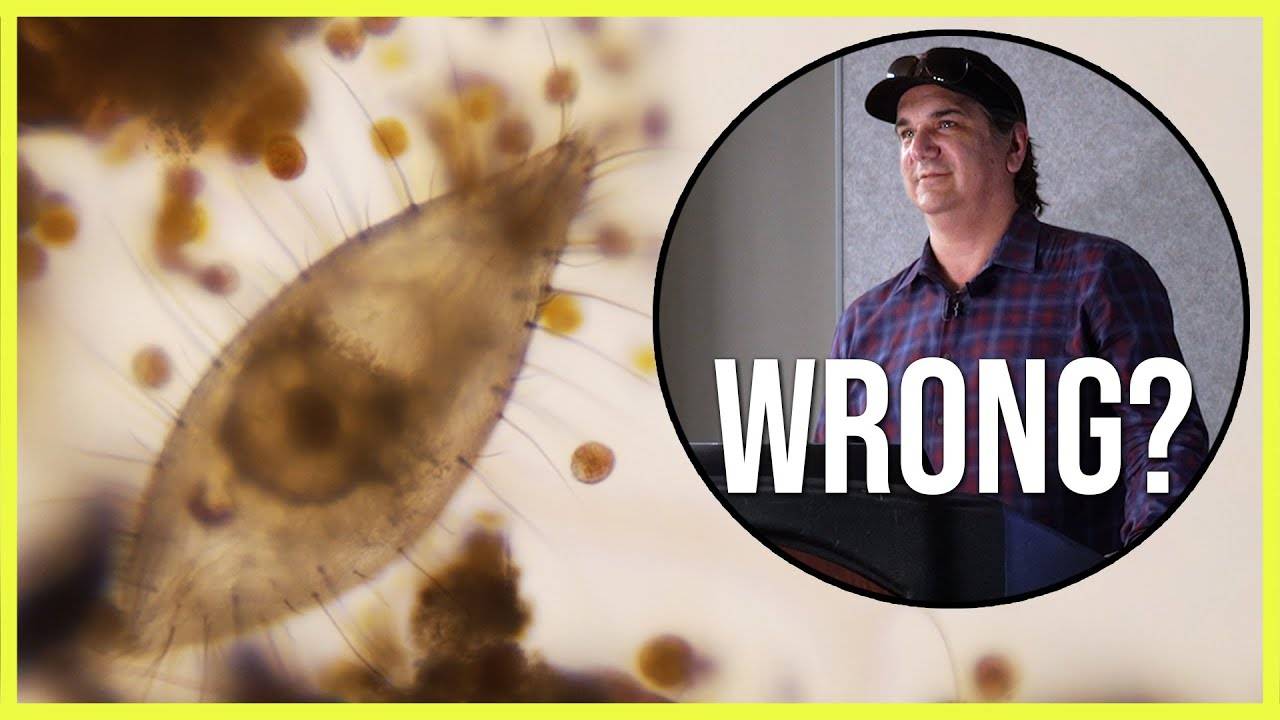 As a quick recap, phase #1 of the experiment lasted a total of 15 weeks. The idea was to examine how the biome develops over the first few months before the introduction of pests that typically come with the addition of corals, fish, and other livestock. Keep in mind that we are not focusing on only the nitrogen cycle rather we are looking at ALL of the various bacteria that develop, nitrifying or otherwise. Each tank was set up using a slightly different approach in terms of substrate and introduction of a biome so we can see exactly how the various approaches affect the development of a diverse and balanced biome.

For congruency's sake, we collected samples for AquaBiomics testing at the same time from every tank throughout the experiment. The results are documented below along with some interesting observations that could only be made using the AquaBiomics DNA testing reports.

Gulf rock is actually mined dry rock pulled from inland quarries that are then dropped out in the ocean and left for multiple years where it becomes teaming with life. The rock is then collected from the ocean and shipped overnight in water, directly to hobbyists as an eco-friendly live rock alternative. The obvious benefit here is bringing living biome from the ocean into your new aquarium but what does that mean in terms of hitchhikers and pests that are often found on wild collected live rock? 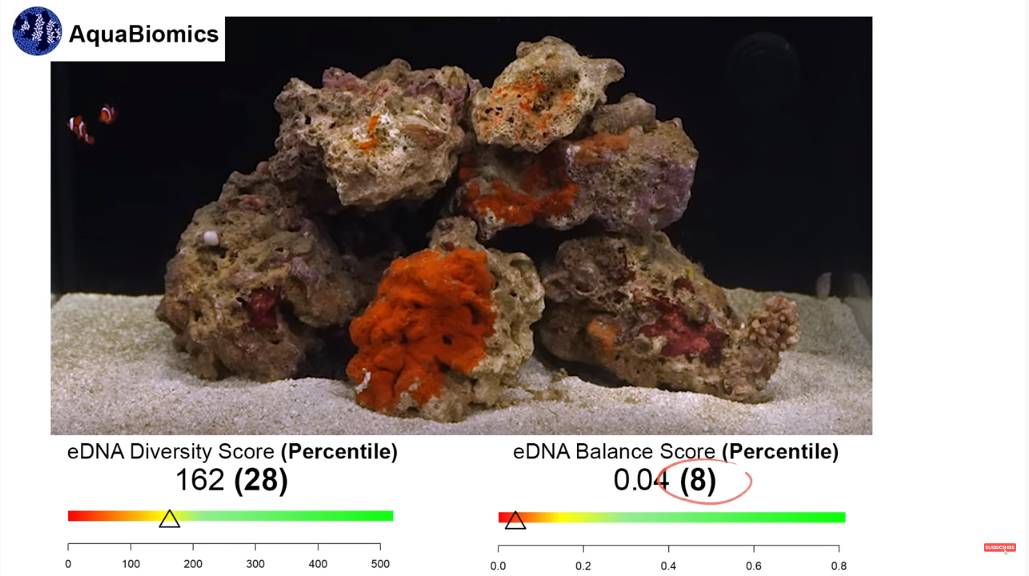 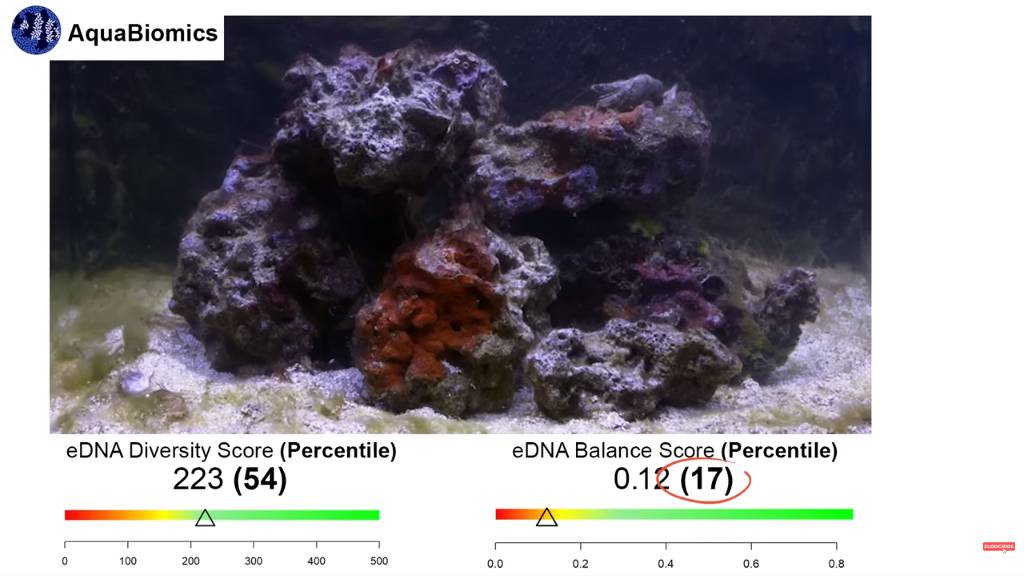 The most notable difference with the Gulf Rock tank is the amount of life on the rocks. Sponges, crabs, and various other organisms survived in the aquarium which does make for a much more appealing visual than stark-white dry rock but with all that life, there is most certainly a pest or two.. or three or more.

Right away, the tank was obviously teaming with life because of everything brought into the tank on the rock itself. By week 4 there were visial signs of microcrustaceans and some of the living sponges started to die off, presumably from lack of food.

By the end of the test, the tank ended up with a cyano bloom that was soon taken over by algae. The diversity score was the highest of all 12 tanks but the balance was among the lowest which really shows in that photosynthetic pests had no problem growing and dominating the tank when we turned on the lights.

Real Reef rock is a man-made purple-colored rock that is curred in saltwater for quite some time. It is shipped using moist newspaper with the idea of retaining at least some of the biome it develops during curing but is completely free of any pests and photosynthetic organisms. It is hands down one of the best-looking options short of using live rock from the ocean. 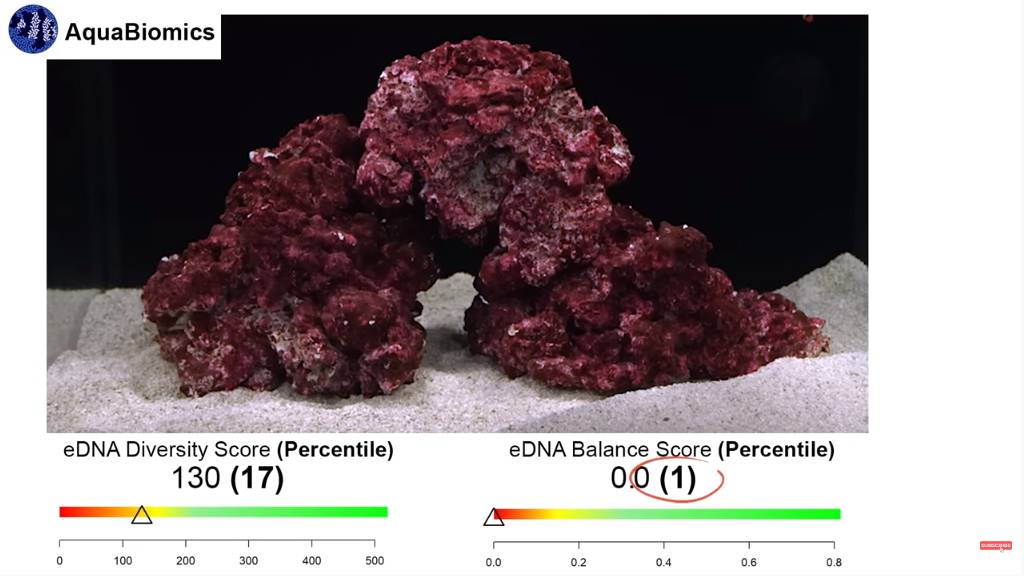 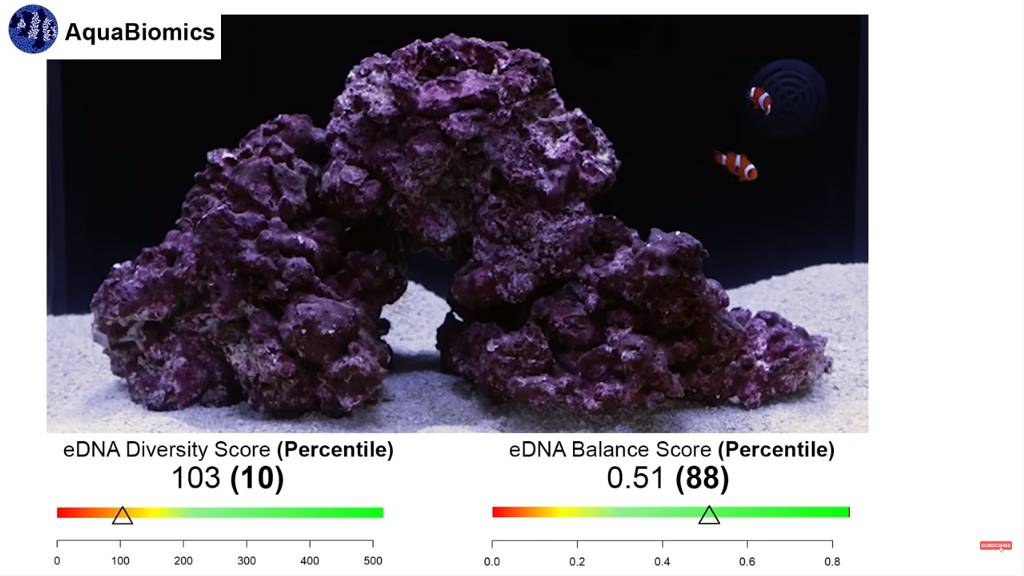 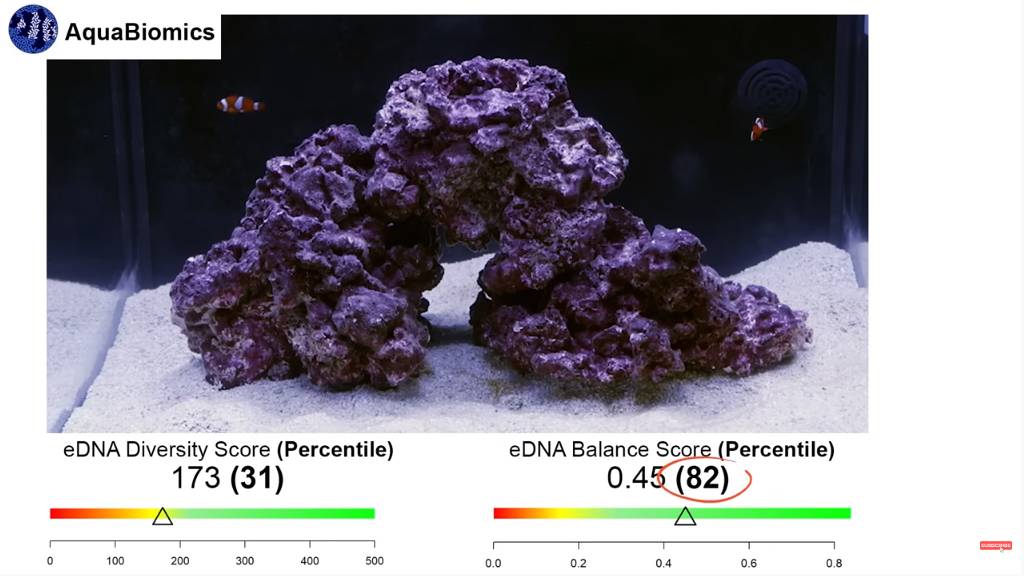 Ultimately, Real Reef Rock produced the 2nd best results during phase 1 of our testing and was only beat by the control tank (dry sand and dry rock) in terms of a high balance score. There was a diatom bloom that occurred after turning on the lights but that cleared up on its own just one week later. From that point forward, there were no signs of pests and the balance score from AquaBiomics sustained above 80%. By Week 15, the tank looked great visually with no serious photosynthetic pests and earned equally impressive scores from AquaBiomics.

This tank was unique in that we used Aquaforest Bio Fil Media in the filtration chambers and dosed the tank with Aquaforest Life Source Mud once per week throughout the experiment. For substrate, we used the Aquaforest fine-grade dry sand and Marco Rocks brand dry rock. Life Source Mud is a naturally collected marine substrate that has some potential considering the positive results we witnessed with Ocean Direct Sand which is also collected directly from the ocean. 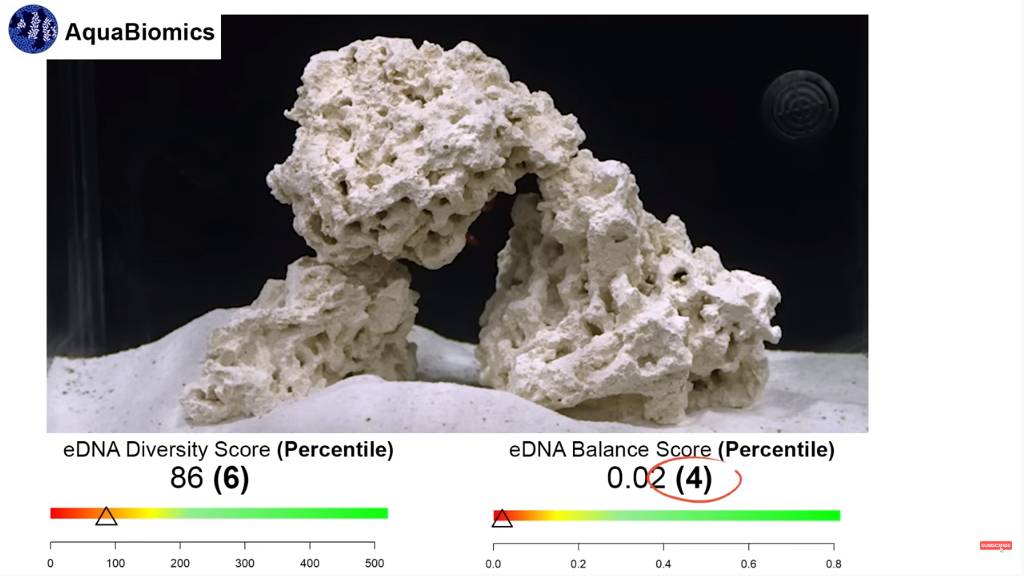 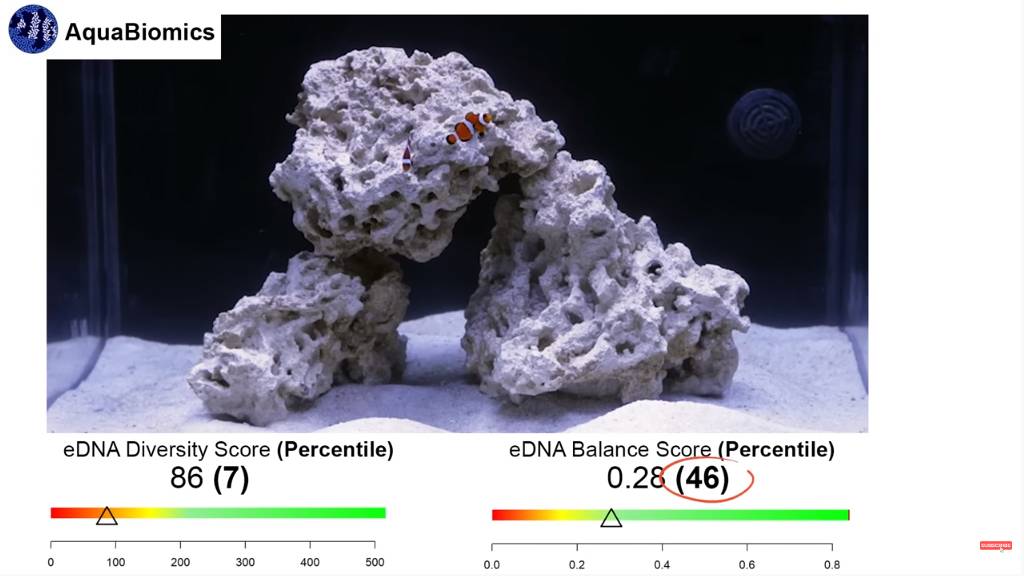 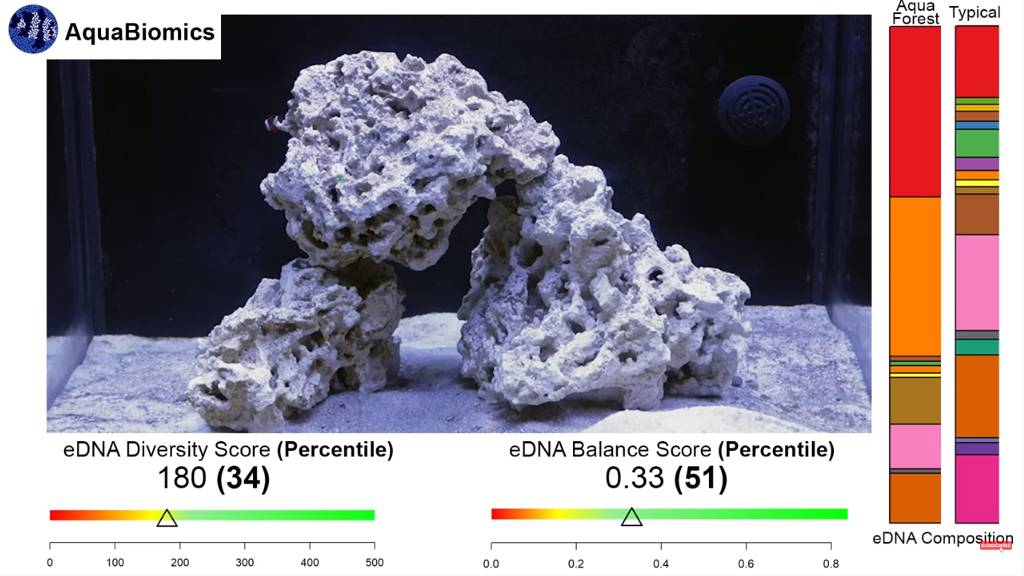 Interestingly enough, AquaBiomics results reported remarkably similar biome diversity and balance scores as the Ocean Direct tank throughout the entire test. By the end of the test, the results were almost identical and the tank ended up more balanced than 51% of the tanks AquaBiomics has sampled which is a decent score.

Visually, the diatom bloom seemed to stick around a little longer but ultimately cleared up before bumping up the lights on week 10. While there were no photosynthetic pests that showed up or stuck around past week 15, the dosing of the mud seemed to stick to the biofilm creating an unsightly great layer on the sand. Nothing a little cleaning could not fix but something to note nonetheless.

In this tank, we used dry Marco Rock, dry Caribsea Sand, and an established brick of MarinePure Bio-Media placed directly in the display. We are curious to see how this pans out with brick being located in the display where it will receive light.  In theory, these large bricks could be very easy to mass produce and sell as established microbiome media for new tank owners. Could the answer for the best path to microbiome success be as simple as selling an established piece of bio-media? 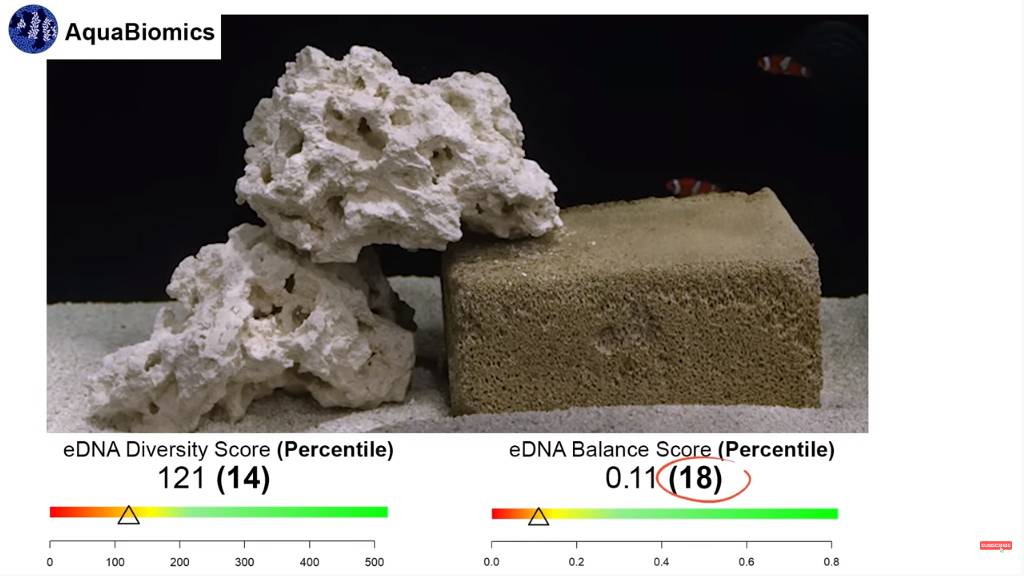 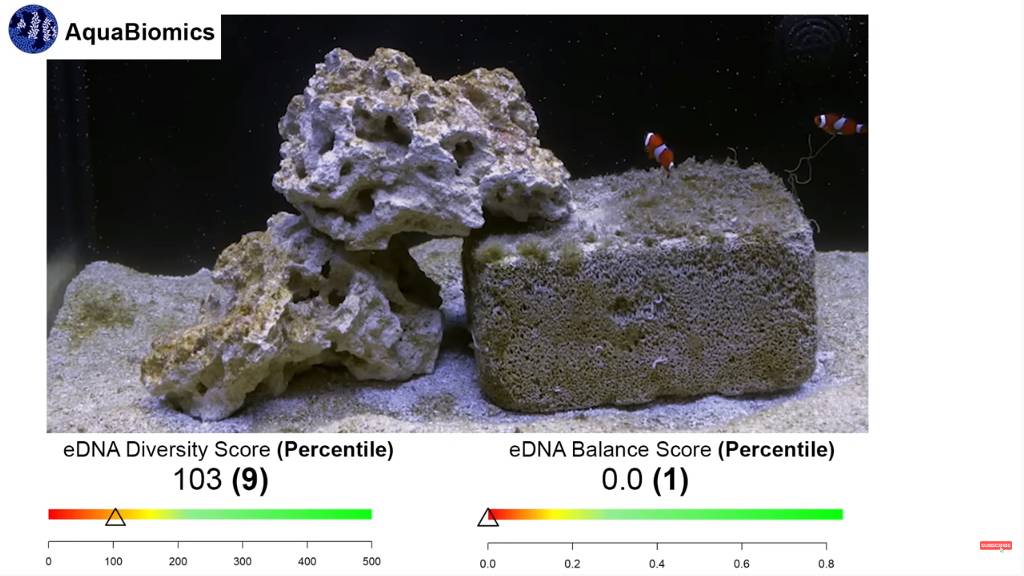 As with most of the tanks, this tank stayed fairly clean before turning on the lights.  The established brick obviously introduced microcrustaceans, worms, snails, and limpets which slowly increase through the entire 15-week period. After turning on the lights, diatoms immediately showed up which were replaced with a layer of green algae immediately after which then turned into hair algae.  Past week 10, the hair algae stayed somewhat isolated to the established brick but eventually spread to the rocks and sand bed before ending week 15.

While this tank was certainly not the best performing tank through phase #1 of the experiment, we probably could have had better results by simply placing the brick in the sump where it would not receive any light. Although we have not yet shared the results from phase #2 of our tests, this tank actually turns around and winds up being one of the best-looking tanks after we purposefully introduce a myriad of pests.

Be sure to stay tuned as we move into phase #2 of our tests where we share the results from all 12 tanks after introducing a slurry of pests and find out which biome cycle approach remains supreme.