We know the biome in our aquariums consists of much more than just the fish, corals, and other organisms we see with our eyes. There is an entire community of tiny microscopic organisms that also makeup the biome and play an incredibly important role in the captive ecosystem. As we strive to cycle an aquarium with a healthy biome, we need to ask ourselves, what does a healthy biome look like?  How can know for sure the microbiome is healthy?

AquaBiomics provides DNA testing services for aquarists that provide us with an accurate snapshot of our aquarium's biome and diversity. They can also help us determine if any disease-causing parasites or pathogens are present in our tanks.

At AquaBiomics, there are two types of DNA testing services. The Microbiome service looks at bacteria and archaea by capturing fully intact cells from your aquarium. The DNA in those cells is analyzed so that we can identify the different types of bacteria and their relative density. What types of bacteria make up your tank's biome and how much?

The second service called TankDNA uses a different approach and measures something called eDNA which stands for environmental DNA. eDNA is simply traces of DNA left behind by all living organisms that inhabit an environment. By analyzing a sample of eDNA from your aquarium, AquaBiomics can identify ALL of the various organisms that inhabit your tank, including fish, corals, parasites, bacteria, crustaceans, worms, snails, etc.

Through our microbiome experiment, we used the Microbiome testing service to analyze our test aquariums. With each DNA sample, AquaBiomics delivers the DNA test results electronically and includes a report that outlines the diversity, balance, and overall composition of your tank's biome.  It's a simplified and organized interpretation of the DNA analysis data. 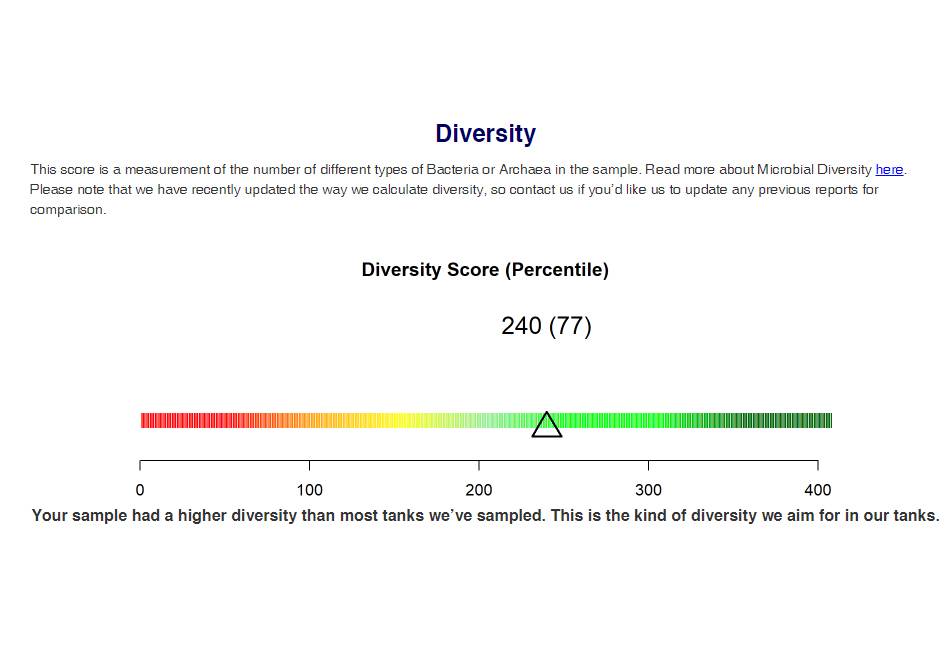 The measurement of the number of different types of microbes in your aquarium. You will get a sheer number of the different types of organisms along with a percentage score that compares your diversity measurement with that of other aquariums. A 12% diversity score means that 88% of healthy aquariums they have tested measured MORE diverse than yours. 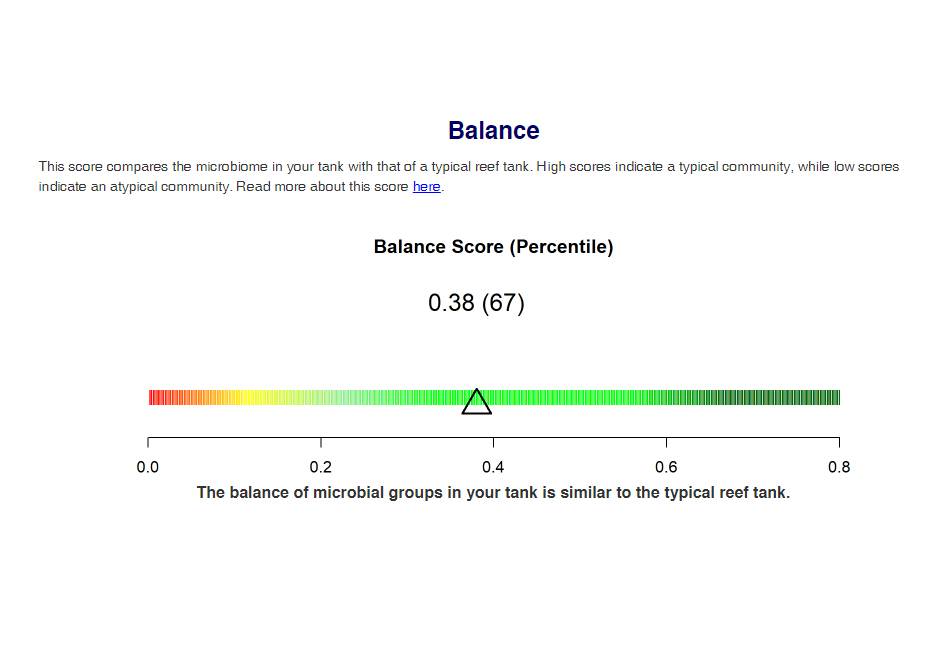 This is a measure of the microbe's abundance ratio to one another.  How much do you have and is it the right kind of microbes?  The balance is measured on a scale from 0.0  - 1.0 with 1.0 being the perfect match to a well-balanced reef biome and 0.0 being imbalanced. You also get a percentage score to see how your tank's balance ranks against others they have tested. 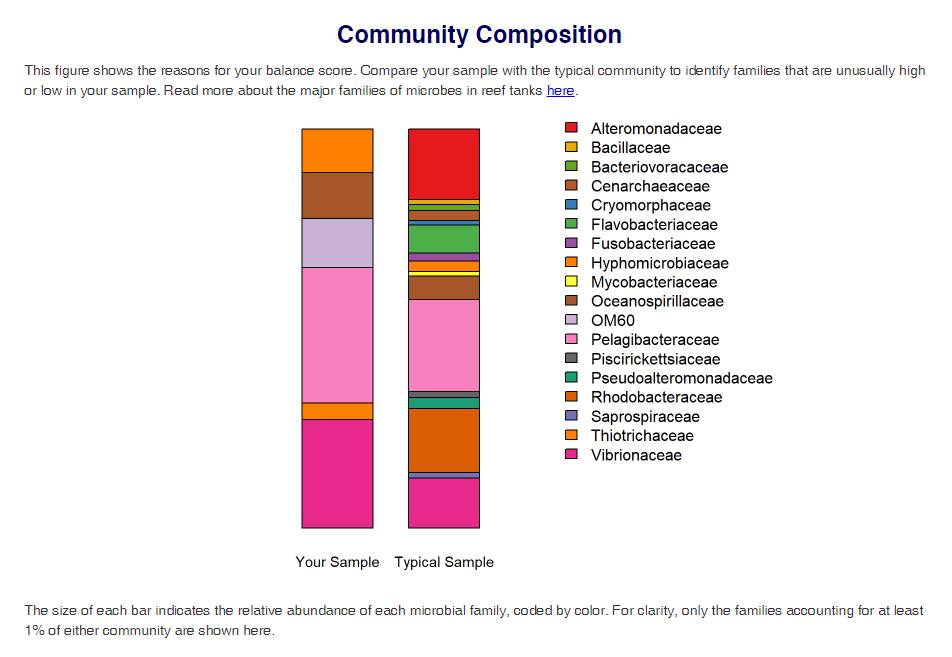 This is the identification, the list of bacteria and archaea families that make up the biome in your aquarium. It gives you a bar graph that is representative of your balance score to help you see the abundance of various organisms in your aquarium and their ratio to one another. You also get a side-by-side comparison with what a typical balance reef biome looks like.

AquaBiomics has gathered enough data from the aquarium community to identify the 5 major families of microbes that exist in aquariums and although the biome is complex with hundreds of different microbes, the bulk of the biome appears to be made up of these 5 different families as represented by the larger blocks of color on the bar chart of a typical reef.

These groups of bacteria naturally relate to different environments and have different preferences. In many ways, we can relate those environmental conditions to our aquariums and the DNA tests often reveal congruences in terms of when and where these bacteria show up.

Found in a majority of established reef aquariums but rarely occurs in new tanks. It feeds upon the mucous found on the skin of fish and corals as well as decaying invertebrates which is why we see it dominate in tanks with a heavy bioload and is almost absent before fish and corals are added.

These are the microbes that make up the biofilm that covers the rocks and other surfaces in the tanks. Naturally, it occurs in higher-nutrient lagoons as opposed to lower nutrient off-shore reefs which is probably why it prefers the conditions in our tanks which more closely resemble those nutrient-rich lagoons.

This is the family that dominants the open ocean and thrives in low-nutrient coral reefs. It stays suspended in the water column as opposed to living on the substrate or surfaces in your tank. Through DNA testing we have found this bacteria rarely shows up in new tanks and slowly starts to populate as a tank matures. Being suspended in the water column means this bacteria is susceptible to UV sterilization; this will be explored during or Biome Cycle test experiments.

This bacteria is present in most established aquariums and is another free-floating bacteria but it prefers high-nutrient environments instead of low-nutrient situations like Pelagibacteraceae. This bacteria prefers organic acids like amino acids or acetate and often blooms in response to carbon dosing or probiotics which often contain vinegar.

This family thrives in higher-nutrient situations but will tolerate a range of nutrient levels.  It most often grows alongside nuisance algae because they prefer the carbohydrates released by photosynthetic algae and will often dominate in tanks with a heavy cover of nuisance algae or a refugium full of macroalgae.

It should be clearly understood that AquaBiomics is a very new company and this kind of exploration into the microbiome of our aquariums is very new.  The definitions and explanations that AquaBiomics shares are not meant to be absolute because we are on an exploratory journey together. That said, there is some incredible insight we can gain and lessons to be learned from the data that has already been collected. As AquaBiomics tests more tanks and collects a broader data set, the answers and explanations will evolve into a more definitive resource.

No aquarium will ever be perfect or exactly match a "typical aquarium" as defined by AquaBiomics and their data set. Every aquarium will be different and it's more about how close you can get. Even the most successful and mature aquariums will not test perfectly because there are just too many variables.

Pictured below are the AquaBiomics DNA test results that were sampled from our test tanks just two weeks after they were set up. While the community was incredibly different between all of the tanks, we see similarities across the diversity and balance scores where none of them scored very well. 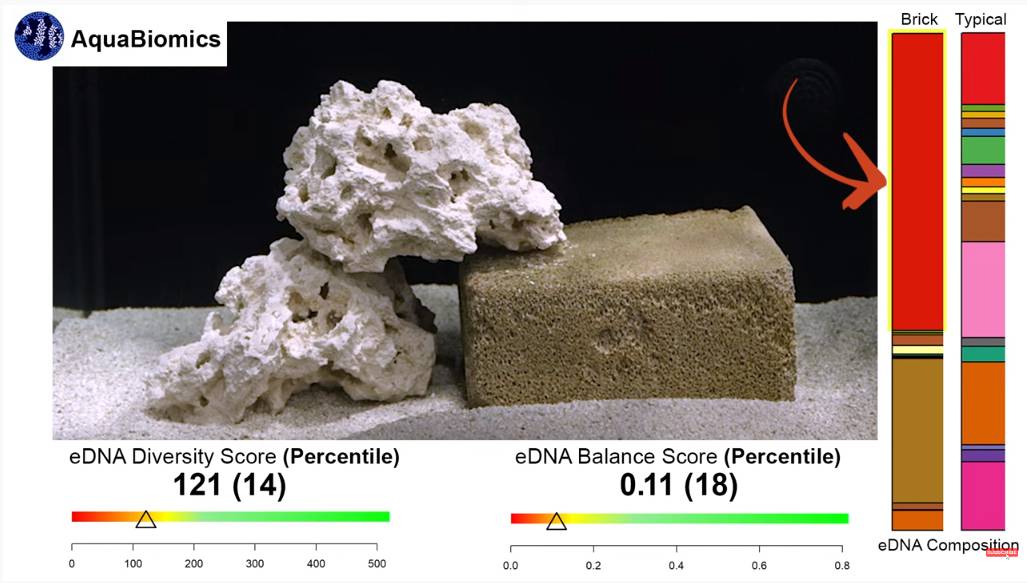 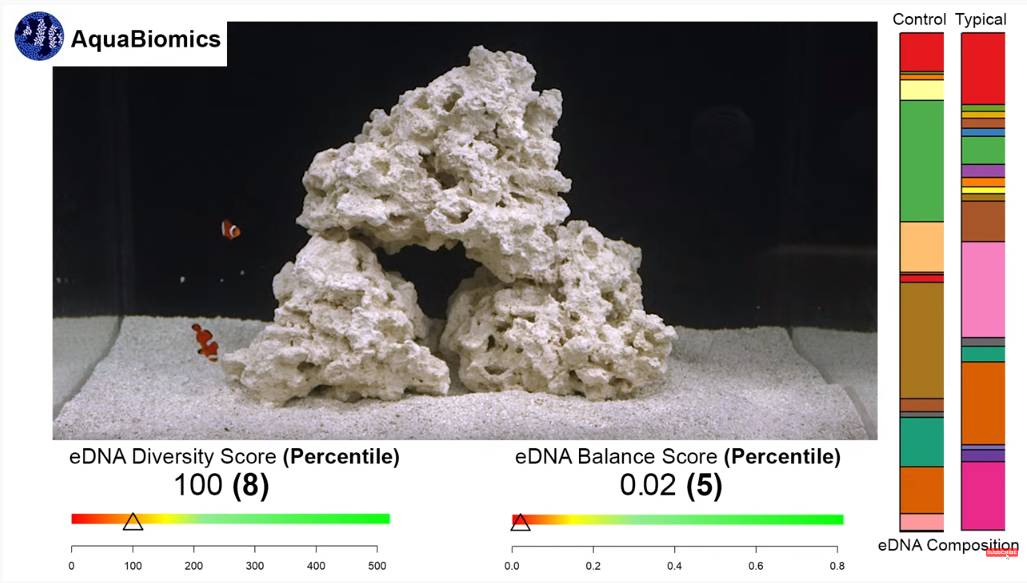 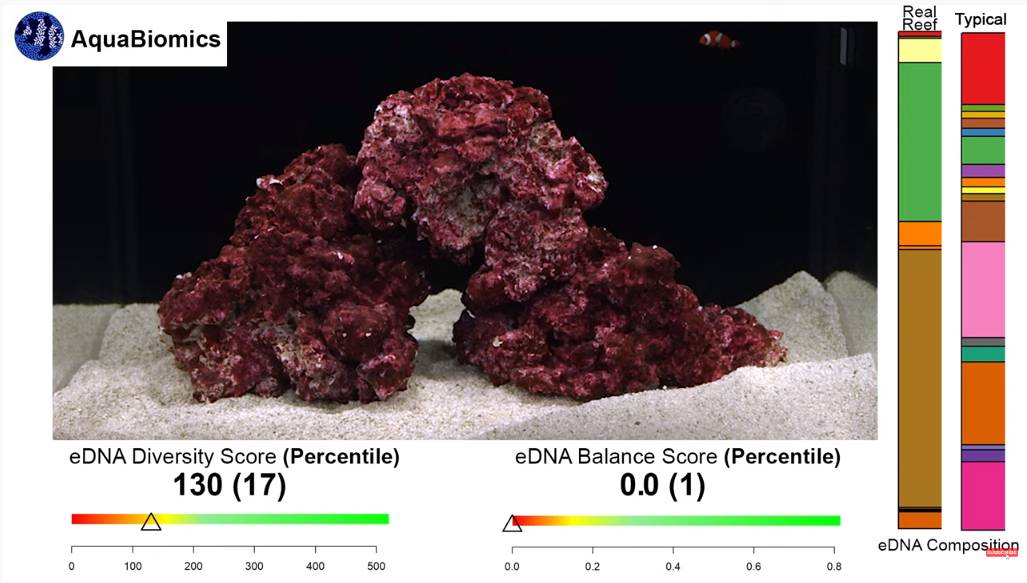 These samples were pulled from the most established and diverse aquariums at the BRS headquarters in Minnesota. Some interesting takeaway considering the variation among the three tank reports yet relatively equal level of success. This goes to show that success can be found without perfect AquaBiomics scores and the answers to a healthy biome are certainly more complex. 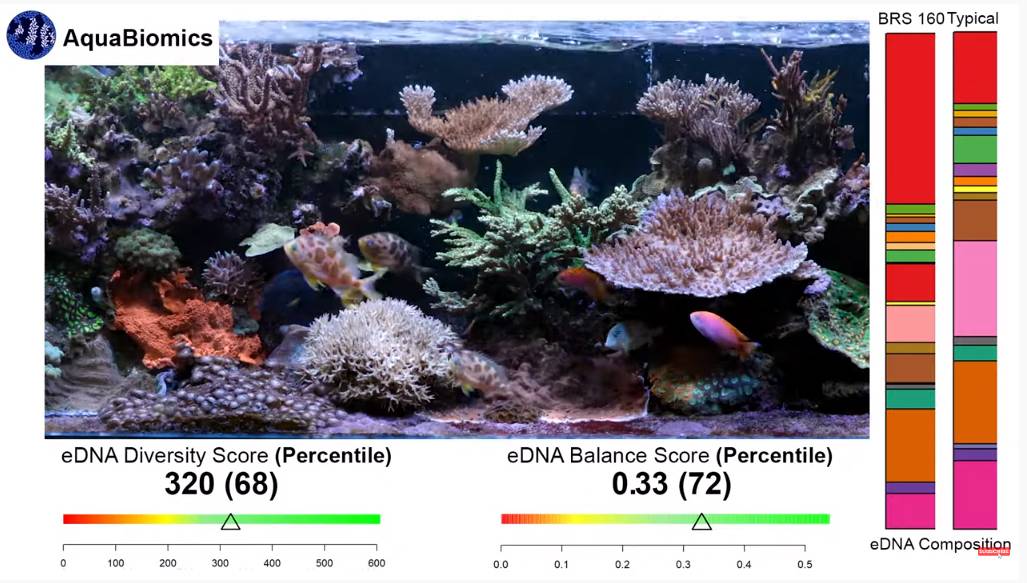 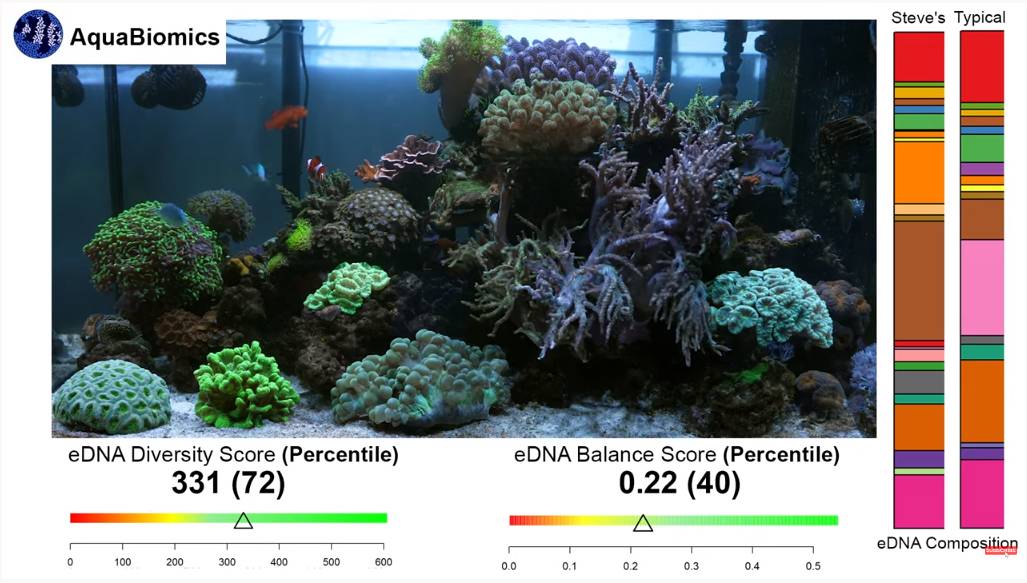 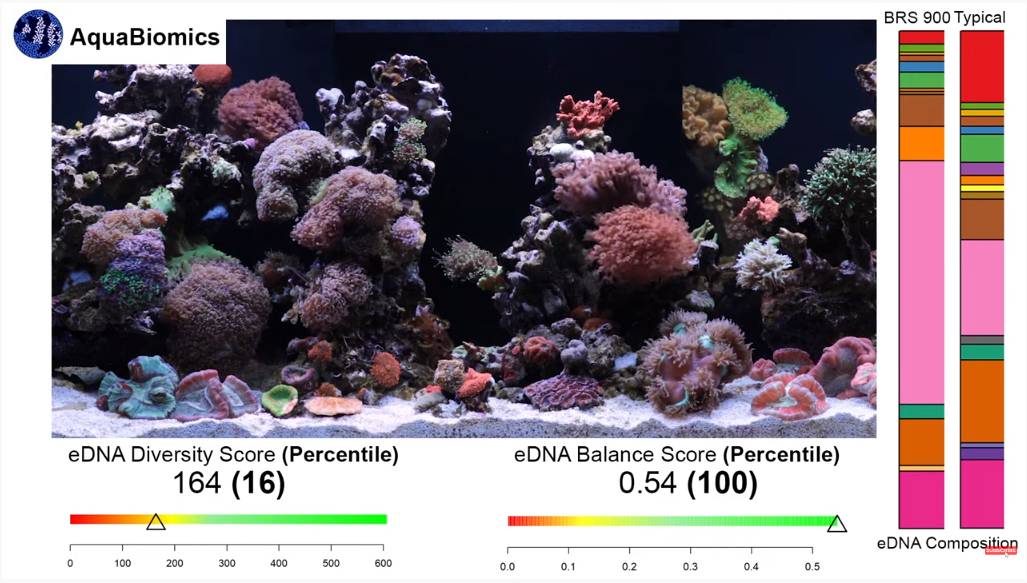