PAR, Spectrum and everything in between, this is the Red Sea ReefLED - BRStv Investigates

The wait is over for Red Sea’s ReefLED aquarium light and of course, we immediately put it through the gauntlet of rigorous PAR and spectrum testing to see if it produces a viable light energy source capable of sustaining corals’ metabolic functions.

We also share our thoughts about the features, specifications, mounting and control options and visual performance to ultimately help you choose the smartest lighting option for your tank. 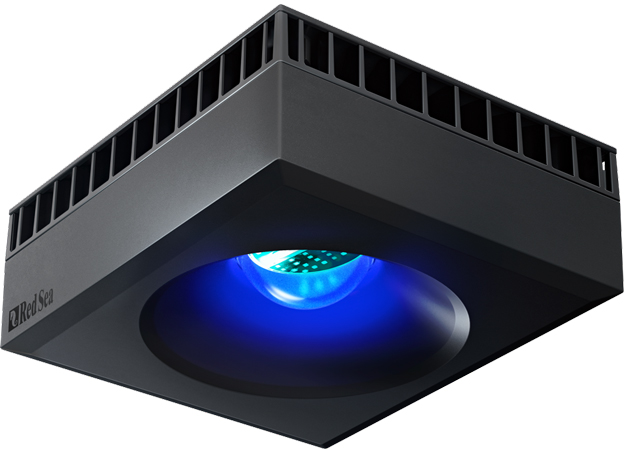 We have tested a few different LEDs in this similar 90 watt range and we will take a similar approach with the Red Sea ReefLED 90 watt fixture by looking at it from three angles: coral health, visual appeal and features. 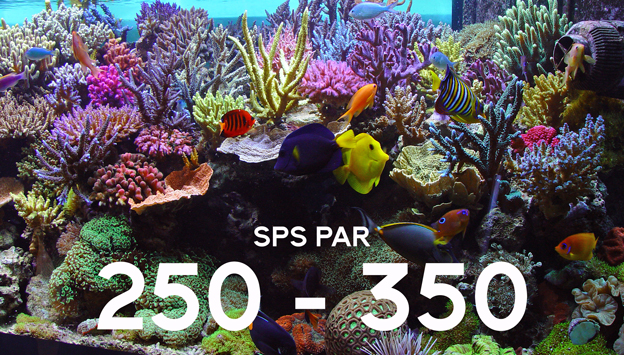 We focus the PAR testing around high demand SPS dominant aquariums with a target of 250-350 PAR because if the light is capable of producing these numbers, it will have no problem supporting photosynthesis within lower light corals such as LPS and softies.

Check out our video What’s the best PAR for SPS corals? in which we go into some pretty serious detail about PAR requirements for corals.

Our first set of data is taken from a single Red Sea ReefLED 90 mounted at the recommended 8.5 inches from the water’s surface over a 24 inch 60 gallon cube aquarium. Measurements are taken across a 36 point grid at depths of 6, 12 and 18 inches with the fixture set to Red Sea’s recommended 15,000 Kelvin color preset. 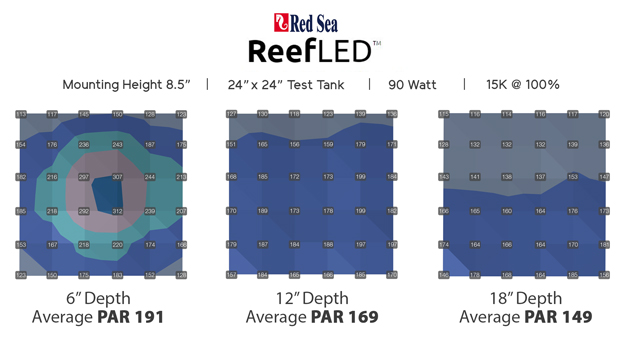 Compared to LED lights we have tested in the past, the ReefLED has performed really well. Considering only intensity, these are among the highest average PAR numbers we have seen to date proving that a tight cluster of LEDs under a single lens can effectively light the entire aquarium.

In a real world scenario a single ReefLED 90 over a 24 inch cube falls just short of the target 250-350 PAR range for SPS but for slightly smaller or shallower tanks, a single ReefLED would be perfect for any type of corals. Red Sea echoes this in their light recommendations chart with a single ReefLED 90 being suitable for the Reefer 170 aquarium which measures 24.5 x 20 x 20 inches. 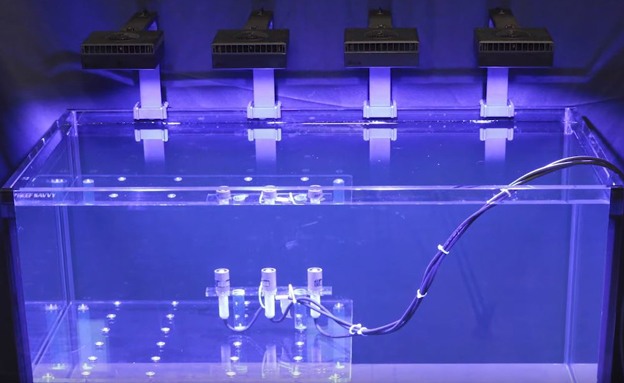 To get a more clear picture of distribution, we moved over to a 2ft x 4ft 120 gallon aquarium and took PAR measurements using 2, 3 and 4 fixture configurations at the same mounting height of 8.5 inches.

With two fixtures at a depth of 12”, we are getting an average par value of 185 with a peak of 235 in the center and low of 155 on the outer ring. As we move down to a 18” depth the light is just about perfectly spread with an average PAR of 168 and minimal changes between the inner and outer rings.

With 3 ReefLEDs over the 4ft long tank we are getting into that SPS target PAR of 250-350 throughout the entire tank all the way down through a depth of 18”. It is producing higher PAR and more even distribution than any of the comparable lights we have tested in the past and would be a perfectly suitable configuration for a heavily SPS dominant reef tank.

These high PAR numbers are to be expected considering we are running four 90 watt fixtures over a 4ft long aquarium. Even when maintaining a high light demanding aquarium, you would likely want to dial down the intensity by 20% to hit the target PAR range throughout the entire tank.

The benefit of using x4 lights would be far less risk of shadowing and a more evenly dispersed spread of light, much like what you would expect from T5 fluorescent light fixtures. You can achieve a more natural growth pattern from your SPS and less internal mortality from shadowing.

Red Sea does an excellent job at simplifying otherwise complicated reefing subjects. They have come up with something called REEF-SPEC which is their approach to identifying specific parameters that are necessary for coral life support in reef aquariums. In the case of LED lighting, the REEF-SPEC refers to spectrum and intensity. 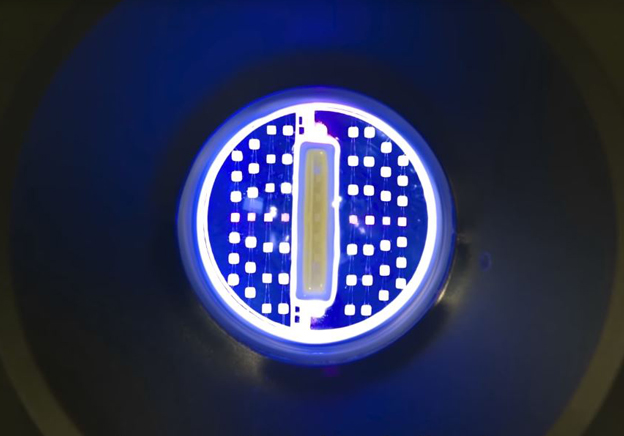 Within the REEF-SPEC guidelines they use the word Reef-Safe to describe the ability to make changes to both color and intensity by using only a few options (2 color channels) to prevent users from making wildly unnatural changes in lighting that are not optimal for coral health. ReefLED users are given three Reef Safe spectrums that are achieved with the settings below.

The white channel consists of 8,000K white LEDs and the blue channel is a proprietary mix of blue, violet and UV LEDs which they have dubbed REEF-SPEC Blue.

With all three settings utilizing 100% of the blue LEDs we see nearly identical spectrums from the UV 380nm range to about 480nm. From 480nm on, the spectrum is similar between the 15K and 20K settings, however, almost no green, yellow and red when using the 23K setting. 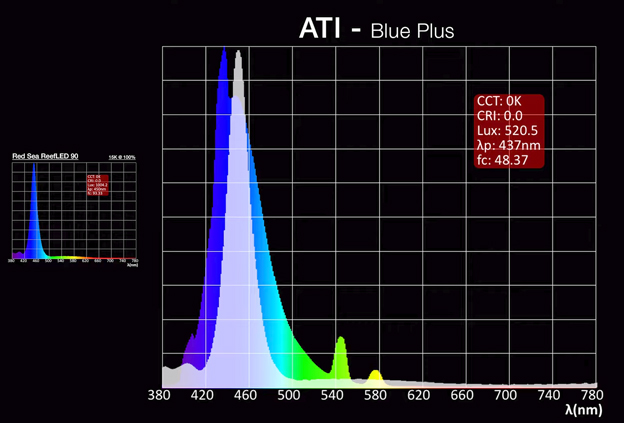 To give you some frame of reference for how this spectrum offering compares to one of the historical gold standards of reef tank lighting, we placed the 15,000K ReefLED spectrum over the ATI Blue Plus T5 bulb spectrum. The ReefLED does have more representation in that 380 to 400 range, yet doesn’t seem to provide as wide of a spectrum band in the 400 to 490 range.

To look at spectrum blending we mounted a single ReefLED 90 at 19 inches above a 9 point grid in air. 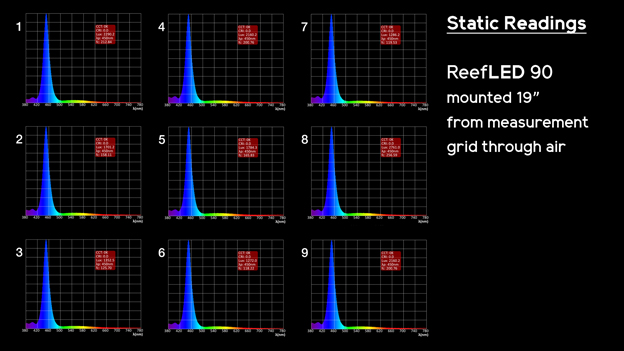 As we move around the different test points we see almost no change in color spectrum which is because the single lens effectively blends the comparably minimal range of LED diode colors. 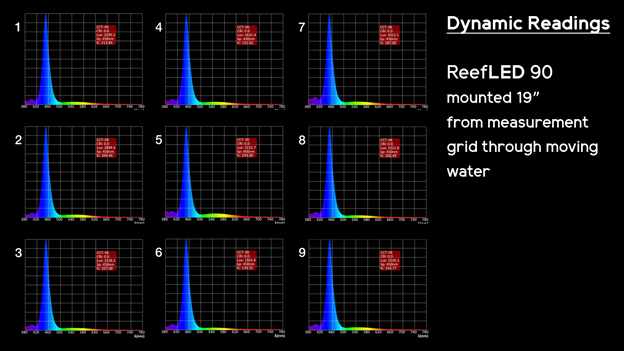 We performed the same test with water added to get a better idea of what it would look like in an actual reef tank.

With surface agitation we do see a bit more subtle changes in the lower and higher color spectrums but the peak around 450 and band between 430 and 480 remain unchanged. This just so happens to be the optimal spectrum for zooxanthellae growth and exactly what Red Sea sought to achieve when developing the light.

Next to an LED fixture’s ability to serve its purpose of providing energy for corals, it simply has to make the tank and corals look awesome.

Red Sea stayed true to their goal of providing what they feel is ultimately the best spectrums for coral health and function so with the ReefLED 90 there’s less of a range for color adjustments that reefer’s can use to make the coral look more appealing to the eye and more focus on color choices that grow corals. 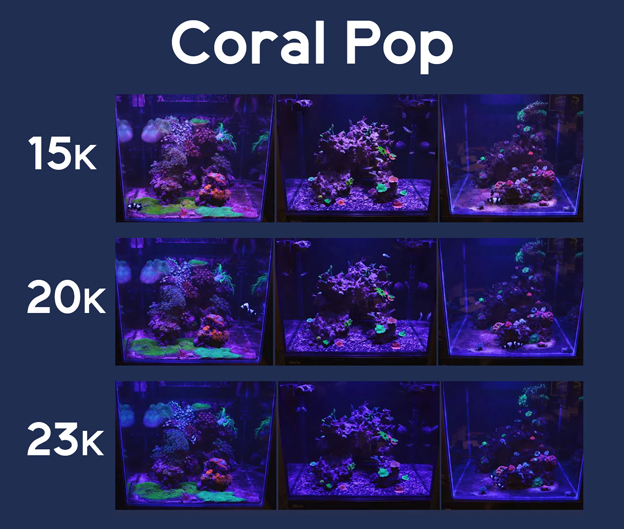 We placed a single ReefLED 90 over Ryan’s softie, LPS and SPS tanks. We compared the performance of each of the preset colors temperatures of 15K, 20K and 23K to see how each color setting makes the corals pop. 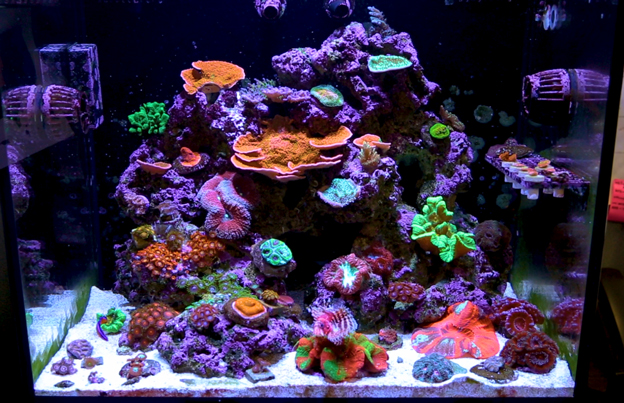 A balance between light and dark areas without looking overly flat will create dramatic contrast in an aquarium and is a critical element to an overall impressive display. 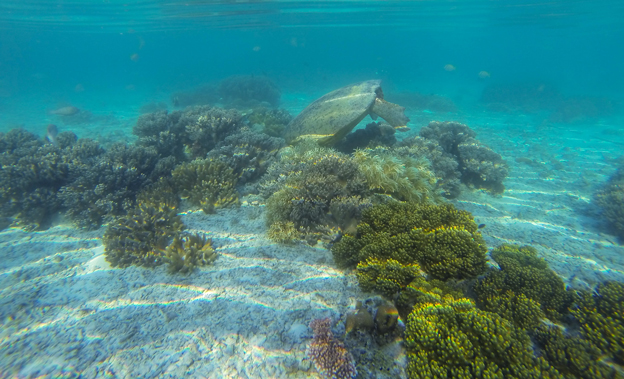 Red Sea has effectively blended the light with the recessed single lens in such a way that eliminates abrasive color spots, doing away with what we commonly call the “disco ball effect”. You can expect white shimmer lines and wide bans of evenly blended colors much like what you would see naturally in the ocean.

As part of the Reef Safe approach, you are only given two color channels to dim down to as little as 1% to create a sunrise and sunset effect; the preset effect can be toggled on/off during setup and customized to your preference.

The lunar cycle effect simply toggles on or off via the ReefBeat app. The ReefLED will automatically start a waxing and waning moon cycle based on 28 days with varying degrees of intensity using the dedicated 3 watt moonlight color channel. 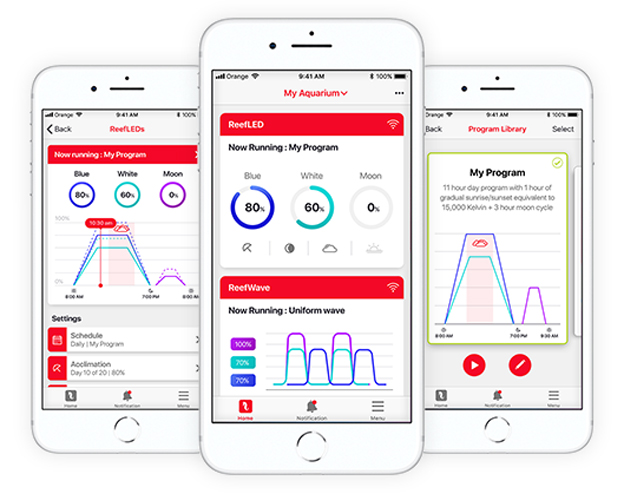 A reefer’s tank is an extension of their overall home or office décor and really can be a piece of art in living spaces where we spend most of our time, so aesthetics is important to keep in mind.

When looking at the light with the ReefLED mounts they fit right in line with other Red Sea products. The technology that creates this powerful light is encased in a roughly 5 inch square housing that is only 2 inches tall which is a relatively small footprint when compared to other 90 watt range LEDs.

At first, the recessed lens was a bit of a concern in terms of affecting how the light looks but after going through the tests, the lens design and positioning works really well to reduce light spillage and any glare directly into your eyes while viewing the tank without any negative effect on performance. 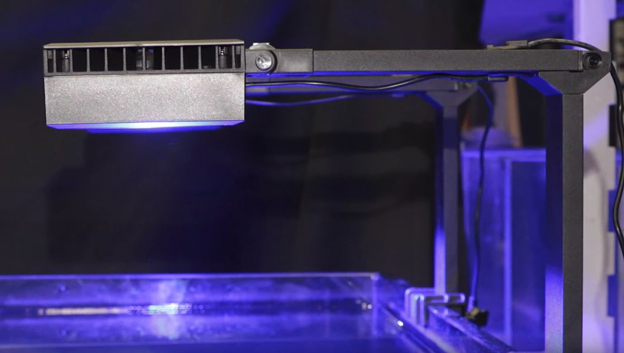 In the name of making the best buying decision while shopping for a new reef tank LED light, the not so flashy details can really make or break your experience. We performed our in-house tests using the ReefLED 90 watt fixture and Red Sea has advertised to also be producing a slightly smaller 50 watt version for nano aquariums up to 20” wide.

Red Sea launched the ReefBeat app alongside the ReefLED which connect via the internal wiFi and ties the light to your home/office router and internet. Setup is super simple and they included some best practice guidelines to further simplify the process.

With easy presets, the app offers a set it and forget it type programming but it also gives you the ability to manipulate photoperiod and intensity, turn on a lunar cycle, acclimation mode and cloud cover if you wish to do so. In-app alerts are a nice feature if any of these custom settings are set to be outside what Red Sea considers Reef Safe.

Grouping multiple lights is easy and automatic as well as setting up and controlling multiple tanks. If you look closely at the Red Sea website they are hinting at this single app controlling future smart devices as well, specifically something called ReefWave which we can only assume will be a powerhead. 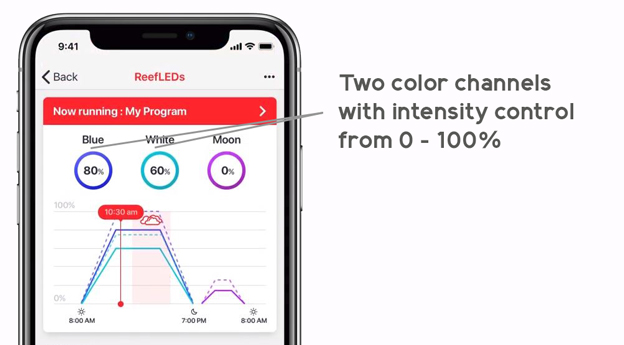 Using the controllability, the ReefBeat app presets are designed to be completely intuitive. They take this a step further by limiting the amount of manipulation you can do so as to avoid any harmful or unnatural spectrum changes.

Email alerts can also be set up to notify you if ReefBeat senses power failure, internet outage or overheating.

The larger area under the LED heatsink allows the single lens to be recessed as far as possible while maintaining a slim 2”inch thick profile and shows careful attention to detail. This large heatsink design also means less fan operation which leads us to the next aspect of quiet operation.

Although it may not be the quietest piece of equipment on your tank, the larger heatsink and ventilation system on all four sides of the light definitely help make the ReefLED a super quiet fixture. 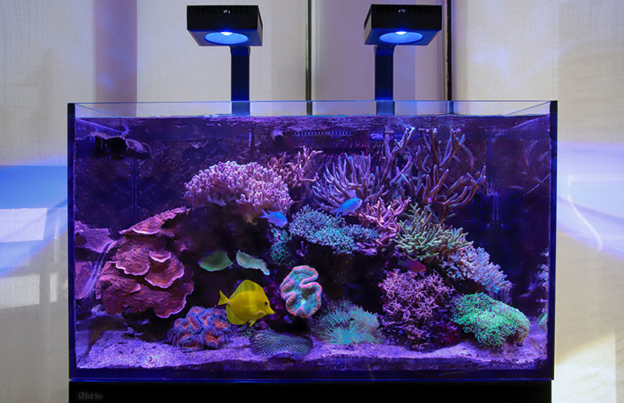 Red Sea has created a light that is absolutely comparable to competing fixtures in the same size and output range. Particularly as it relates to overall PAR and the intelligent use of color spectrum that gives the user some flexibility without allowing for risky manipulation of the light’s output.

You could say that a bit more options for color spectrum would be nice for users to really tune the look they prefer but it is certainly not a deal-breaker. Red Sea focused on providing only the spectrums that are optimal for coral growth which should be our priority with reef tank lighting.

Priced at $350 and using 90 watts of power, our tests today proved the new ReefLED from Red Sea is the most economical option in its class and does not disappoint in terms of aesthetics and modern features.