Will salt mix stratify or separate before we get the chance to use it for our saltwater tanks? | BRStv Investigates

A majority of saltwater used in home aquariums is made by mixing a dry salt mix with RO/DI water. Some folks have access to sterilized natural seawater, but this is very limited for the most part. Whether you are mixing it yourself or buying from a local fish store, it is very likely being made using a manufactured salt mix specifically for aquariums. 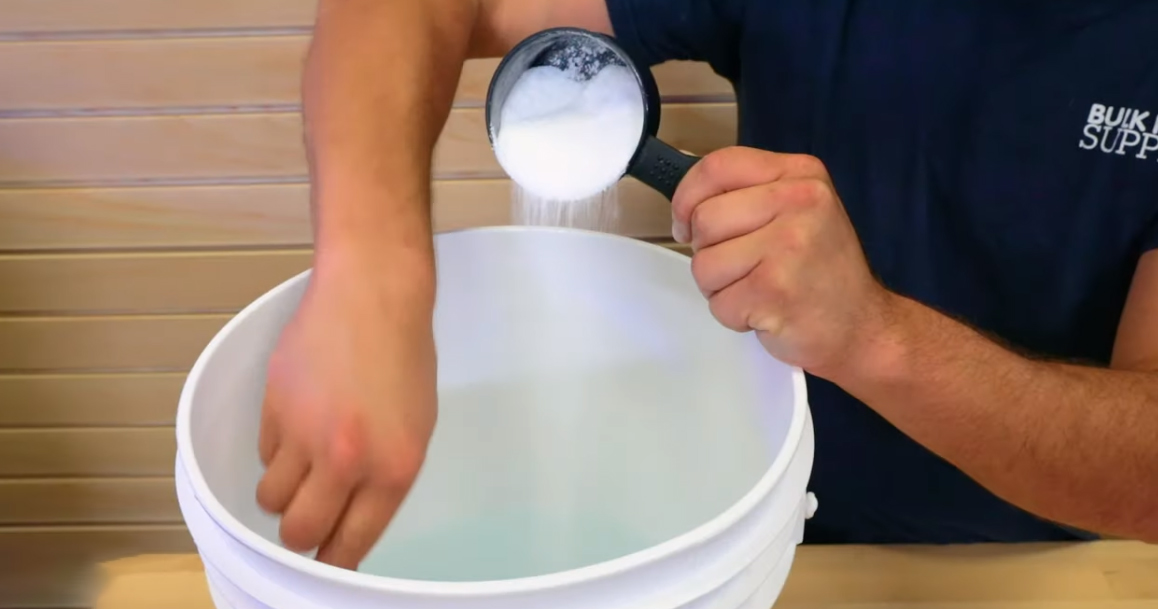 Salt mix is made up of a variety of different minerals and compounds mixed together to ultimately constitute everything found in natural seawater. It is often packaged in 5 gallon buckets or large bags that you would then only pull the amount of dry salt mix you need to mix a batch of saltwater for a water change.


Within the mix, the individual compounds will vary in particle size, shape and density. This means that as the salt mix is shipped, stored and then ultimately delivered to you, it only makes sense to think these various components will separate and create a dry mix that is not homogenous from top to bottom. 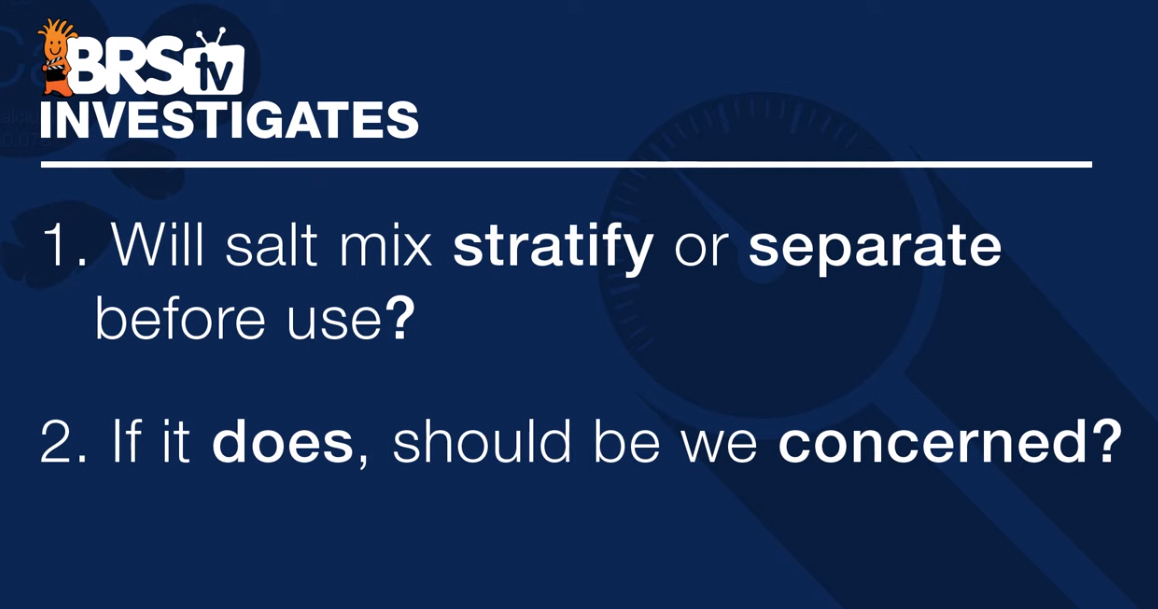 We plan to find out if salt mix will stratify or separate before being used and if it does, should we be concerned about it. 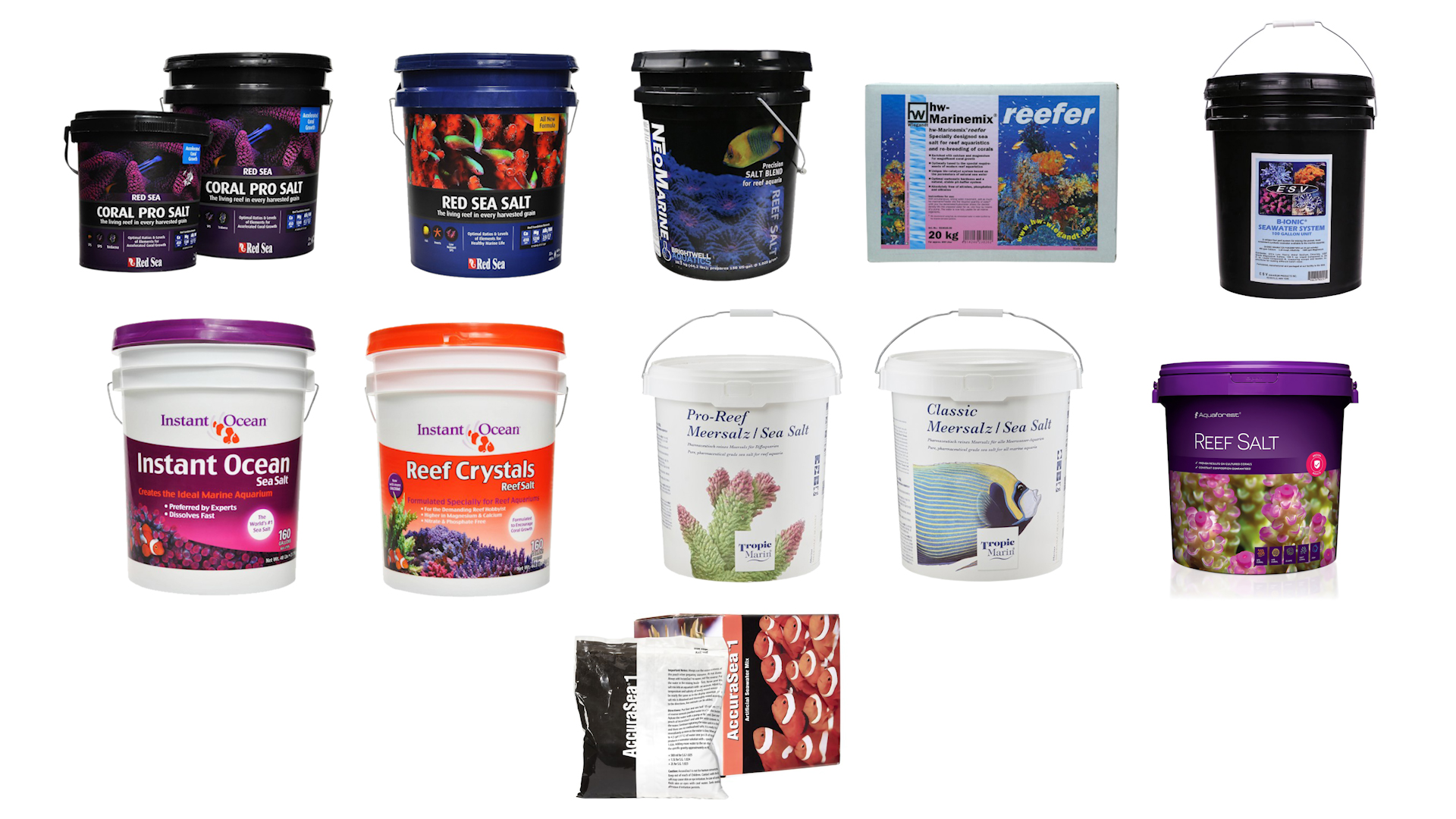 Using a digital scale set to measure in grams, we weighed out the precise amount of dry salt mix needed to mix up 4 gallons of saltwater at a salinity level of 1.026 specific gravity or 35 ppt. We did this for all eleven salt mix brands and mixed up two samples of saltwater from each brand using salt collected from the top of the bucket for sample #1 and salt from the bottom of the bucket for sample #2.


All 22 samples were then sent off to Triton for an ICP-OES evaluation to include all 37 available elements. Since there is no direct test for Alkalinity included in Triton’s services, we tested Alkalinity using the Hanna Instruments dKH Checker manually before mailing the samples.


By comparing the test results from the “top of bucket” sample to the “bottom of bucket” sample, we were able to identify those parameters that shifted and then calculated a change percentage based on the difference between the top and bottom sample. 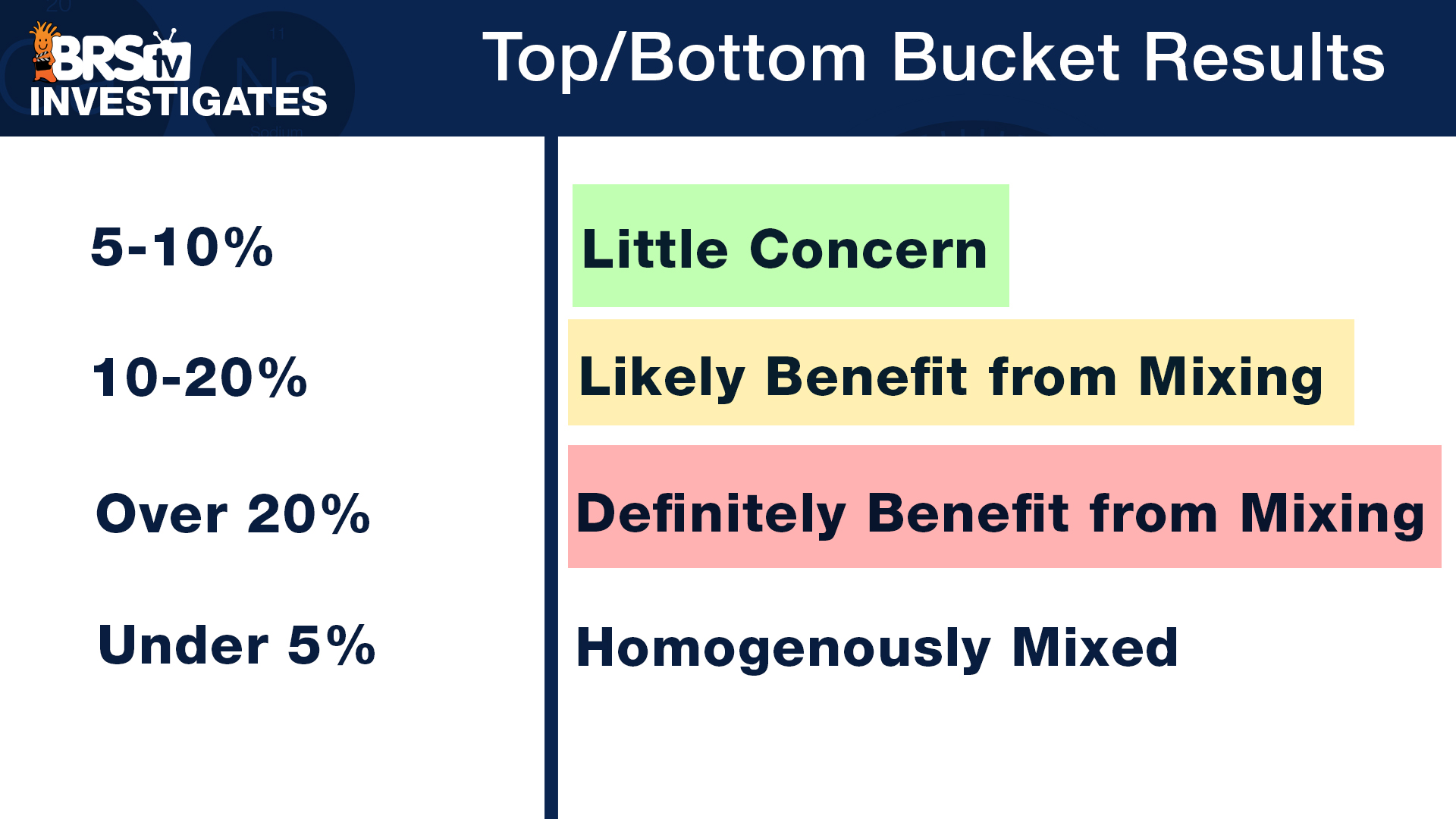 Because each of the 22 samples were tested for a total of 38 parameters, we are only going to focus on those which showed a drastic change. Any brand that displayed a change of 5% or less, we considered it to be a homogenous mix and of no concern. The brands showing a 5% - 10% change are of little concern and any parameter with a change greater than 10% should be mixed before use.


Remember, we are not trying to prove that any one salt brand is better than another. The results from a test like this will likely vary from bucket to bucket, even within the same brand. We chose 11 different salt mixes for the sole purpose of making a fair and accurate judgement about salt mix stratification, no matter which brand you choose to use.


We divided it up alphabetically by brand name and you will find links to the full ICP results from both the top and bottom of the buckets.

AquaForest Reef Salt - From the major element standpoint and alkalinity being right on the cusp of what we considered homogeneously mixed, there doesn’t seem to be much difference from top to bottom in this specific bucket of AquaForest salt mix.


Same case when we look at the Triton ICP results in which only 4 of the 37 elements showed a variance greater than 5% with manganese being the largest variance at 18.8%. Combined with the major elements, AquaForest does not raise any major concerns regarding significant stratification going on inside the bucket and is nearly fully homogeneous.

Brightwell Aquatics Neomarine - For major elements, we do see a difference in alkalinity and magnesium levels around 9% from top to bottom which is not terrible, but certainly enough to alter parameters. The Triton tests revealed a total of 10 out of 37 elements with a variance greater than 5%. Together, these results certainly indicate the mix is not completely homogenous and could benefit from a little bit more mixing of the dry material either at home or in the warehouse.

ESV B-Ionic Seawater System - ESV is unique in that instead of being a single dry mix like all the others, they include 4 different components. Two are dry powders and then two liquids which are intended to be mixed together in a specific order to eliminate precipitation and provide precise parameters when making your own saltwater.


The single component powder ingredients defend against the risk of stratification because only one compound means nothing can separate. The liquid components then contain the remaining necessary elements. When performing our tests, we simply scooped the appropriate amount of powder from the top and bottom of the containers and then added the liquids.


As expected, ESV is one of the most homogeneous mixes we tested with less than a 1% difference for all three major elements and a total of only 3 of the 37 elements from Triton showing greater than a 5% difference from the top and bottom of the bucket.

HW Reefer - For major elements, calcium and magnesium showed very little difference but alkalinity came in with a 9.8% difference. When we combined with the results from Triton we saw a total of 9 elements score over the 5% change which bumps HW Reefer just over the threshold and therefore it will be smart to mix the dry material thoroughly before use.

Instant Ocean Standard - For major elements, calcium and alkalinity both show minimal change around 1% but magnesium was a big outlier with a total change of 10% between the top and bottom water samples. With 8 elements from the Triton results showing a change greater than 5% and 5 of those being above 10%, we do think Instant Ocean could be mixed a bit more before use.

Instant Ocean Reef Crystals - The major element results in our Reef Crystals samples are the worst yet with all three coming in with a greater than 10% change, calcium being the greatest with an 18% change. This was also reflected in the Triton results with a total of 16 elements showing a 5% or more change.


This is the first bucket of salt we see today where we’d likely expect to see a significant benefit of mixing the dry salt at home before use or possibly more mixing at the factory to more evenly blend the components. It’s difficult to know for sure if the stratification happened during transport or from the manufacturer directly but either way, it is showing a drastic difference from salt on top vs the salt on the bottom.

Red Sea Blue Bucket - The blue bucket results again show very consistent parameters from top to bottom for both the major elements and the Triton results. This time there were 6 elements that showed a greater than 5% change but 3 of those came in at a greater than 20% change. This puts the bucket right on the edge meaning it could probably use a bit more mixing at home but not so terrible that it would cause significant changes in your tank.

Two Little Fishies Accurasea 1 - This salt mix is unique in that they separate the box into four 50 gallon mix bags making it easier to mix smaller batches of salt while preserving the remaining salt mix. Even with the individual bags, we did show some variances in major elements as follows: 5.5% change in calcium, 2.25% change in alkalinity and almost a 7% change in magnesium.


The Triton results further separated the TLF Accurasea 1 from our less than 5% threshold with 12 of the 37 elements testing above a 5% change. All in all this is a unique situation because the bags of salt mix are individual and most reefers will make the entire 5-gallon batch like we did, there’s really not an opportunity for us to blend the box of salt better at home without defeating the purpose of single use packaging. Further mixing would need to be done prior to packaging in smaller bags.


When looking at the Triton test results we are showing 18 of the 37 elements with a greater than 5% change from top to bottom. 16 of those are above 10% and 4 elements rose above a 30% change. In this case, it was surprising to see a quality brand like Tropic Marin essentially be the worst performer but, regardless, we definitely think further mixing would be a good idea.

Tropic Marin Pro Reef Salt - Tropic Marin redeemed themselves with the Pro mix which showed some of the best numbers so far for all three major elements. Virtually no change in calcium and alkalinity and less than 1% change in magnesium.


The Triton results showed only 5 elements testing above 5% and based on these numbers it really is not worth the extra effort of mixing further because the bucket appears to be very homogeneous. 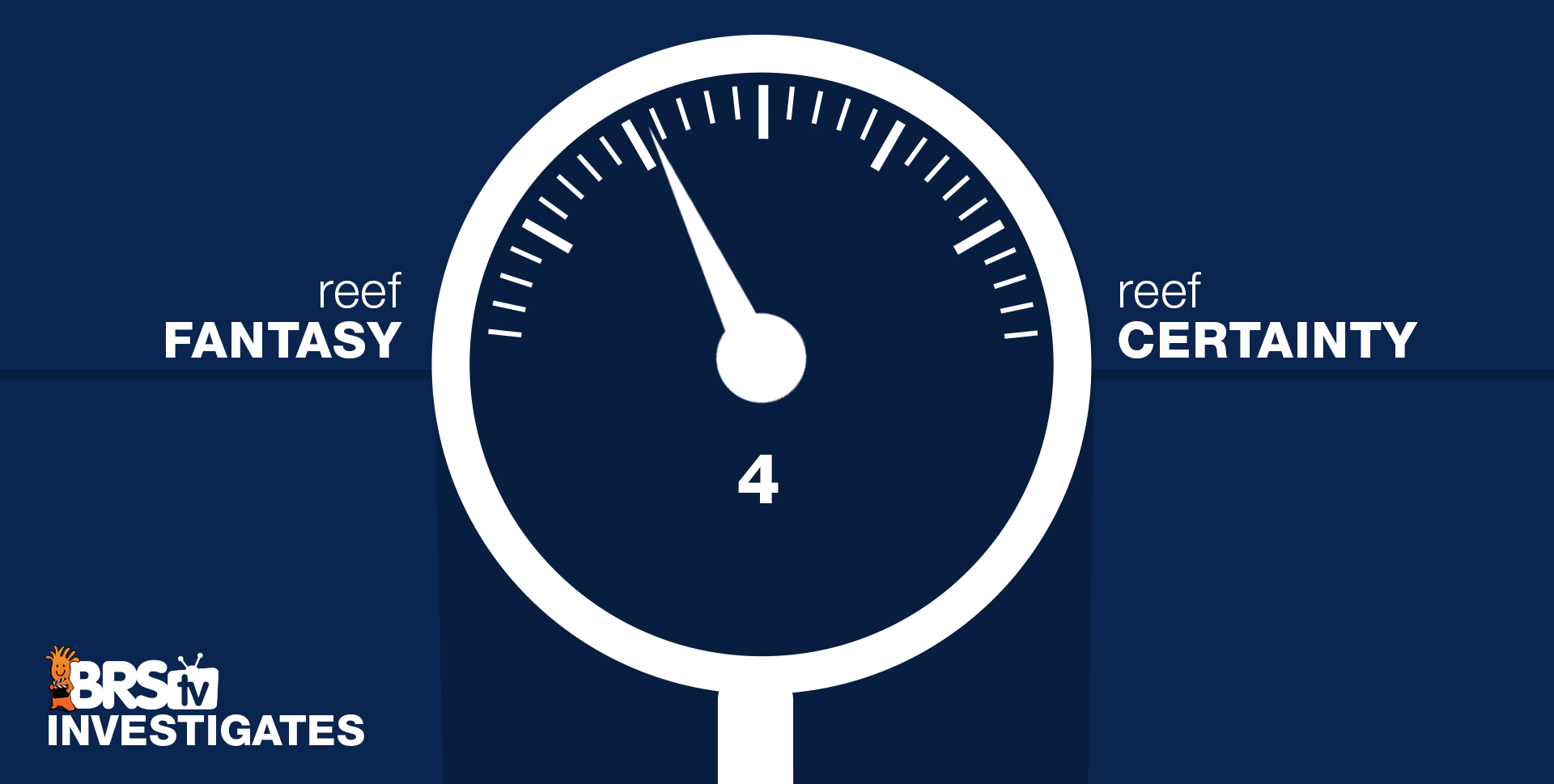 Will salt mix stratify or separate before we get the chance to use it for our saltwater tanks?

Out of the 11 salts we tested, based on the major three elements that most reefers are concerned about we said that 2 of them could benefit from further mixing and 3 of them were riding the fence.


From the full 37 element Triton ICP tests we determined that 3 salts could be mixed a bit more while 4 were somewhat of a wobbler, so with that in mind we give this a 4 out of 10 on the Reef Fantasy scale.


A majority of the salts represented meet reasonable standards for a homogenous salt mix but a few seem that they could benefit from additional mixing at the factory or before use in our home. It is tough to really assign these results to a specific brand because the results will likely vary from bucket to bucket and it is best to think of it as a test for stratification in general which appears to be less of a concern than what we originally predicated.


Is stratification a major concern for reefers?

In almost every case hobbyists will eventually use the entire bucket from top to bottom and over time these differences would simply balance themselves out. Even if one of the elements was 30% different from top to bottom, when calculated using a 10% water change schedule, that only results in a marginal 3% change in the tank which is both meaningless and nearly impossible to test for accurately.


In situations were water changes are in the 25% - 50% of the total tank volume, you could start to see some effect. Small tanks could also be affected with frequent inconsistencies in salt mix parameters causing a spike or drop in the tank. It would really be only these instances that taking the time to do a bit of extra mixing of the dry material before use would be worth the effort. You could also consider using a salt mix brand that offers smaller packages like Tropic Marin, Red Sea and AquaForest or consider using ESC B-Ionic where the components are separated and protecting the salt from separating or stratification.


These are direct links for those of you interested in the data presented via the Triton test results, just keep in mind the target parameters are those set forth by Triton for the Triton Method and do not reflect perfect parameters. Large variances between the top and bottom of the buckets would likely be balanced out if the entire bag or bucket was used as a whole, so just be mindful of how you review and utilize the data.