How To Measure Salinity In A Saltwater Aquarium

Measuring salinity correctly is an important skill for maintaining a saltwater aquarium because the fish and other animals inside the tank depend upon you as an aquarist to maintain the proper salinity levels without fluctuations.

While it is one of the fundamental parameters in a saltwater aquarium, it is extremely important to the health of your tank inhabitants. Hobbyists have a habit of neglecting to monitor salinity closely because it is such a fundamental parameter that is fairly easy to understand and control. The constant or simple nature of salinity can easily be overshadowed by the seemingly more complex chemistry in your aquarium.

The truth is, salinity should be monitored closely in your aquarium and is one of the first things to look at when diagnosing a problem with your tank. So let's jump right into it starting with a scientific overview of salinity and its role in your aquarium followed by detailed instructions for proper measurements.

Salinity is the measure of dissolved salts in water. Salinity is typically measured in parts per thousand (ppt) or specific gravity (sg) but can also be measured using conductivity. The more salt in the water, the higher the salinity readings will be. In an aquarium, we typically are using artificial seawater that resembles natural seawater in terms of chemical composition.

Seawater is a complex chemical solution that contains almost every known element at varying concentrations. Seawater contains organic and inorganic chemicals and a wide range of trace elements. Some elements exist in more abundance making them more predominant over their influence on salinity.

Changes in concentrations of ions outside of sodium and chloride generally do not affect the salinity measurement as these two elements make up such a large portion of saltwater. Seawater tends to have a natural salinity of 35ppt (parts per thousand), meaning that every kilogram of water has 35 grams of dissolved salts. This corresponds to a specific gravity of 1.0264 and a conductivity of 53 mS/cm.

Salinity should be checked very regularly. Oceans are very stable environments, where there is not a lot of day-to-day change in the water parameters. Fish can respond negatively to even small changes in salinity. So, if you have let your salinity get out of whack in your aquarium, make gradual changes to correct it and double your efforts to maintain that stability moving forward. 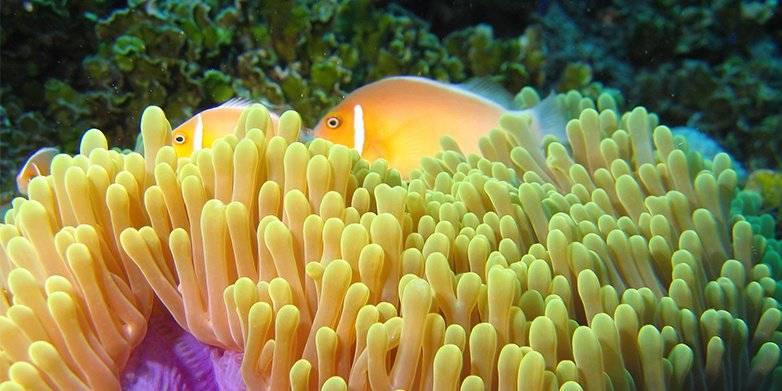 The Importance Of Salinity

Salinity measurements are used when making or mixing your own artificial seawater and to monitor your tank directly.

When mixing saltwater, artificial seawater salt mix is dissolved into purified RO/DI water. The amount of salt required will be adjusted using a salinity measurement, adding enough salt to reach your target salinity level without overshooting it is the idea.

In an aquarium, freshwater evaporates on a daily basis and the salt ions stay behind. This means as H2O leaves the aquarium with evaporation, the salinity level will slowly rise. Aquarists will combat this evaporation by replenishing the tank with purified RO/DI water.

This replenishment often called "topping off" can be done manually by simply pouring fresh water into the aquarium to maintain a constant water level but that manual top-off becomes quite tedious. Instead, most hobbyists employ anATO - Automatic Top Off System instead which not only automates the addition of freshwater but also helps keep a more stable salinity level.

It is best to check your salinity level in an aquarium at least 1-3 times per week and also before/after your water changes. When using an ATO, things can happen that cause the salinity to drift. Water gets spilled, the pump fails or stays on too long, and even water movement can cause the ATO to fail and result in a salinity fluctuation. Point is, even though you have a reliable ATO on your tank, DON'T NEGLECT SALINITY MEASUREMENTS.

Salinity Level In An Aquarium

As a general guideline for saltwater reef tanks, it is best to maintain a salinity of 1.026 (or 35ppt or 53 mS/cm conductivity) to most accurately match the ocean. Outside of a reef tank, there are other situations or different tank types that require different salinity levels.

How to Measure Salinity

There are a few different devices hobbyists are using to measure salinity. Hydrometers are classically the most economical options but leave some room for error. Analog Refractometers are, by far, the most popular because they are affordable, easy to use, and fairly reliable. Digital meters are also available and will either use light refraction or conductivity to measure salinity and have gained popularity in recent years for their ease of use and reliability.

A box hydrometer is a plastic box with a salinity scale printed onto it and a swing arm inside of it. When the box is filled with salt water, the swing arm rises to a certain point, based on the salinity. Box hydrometers are inexpensive and easy to use, but often inaccurate. If the swing arm is corroded or has dried salt on it, the measurement may be off. Swing-arm hydrometers cannot be calibrated and must measure saltwater at a predetermined temperature to maintain accuracy. 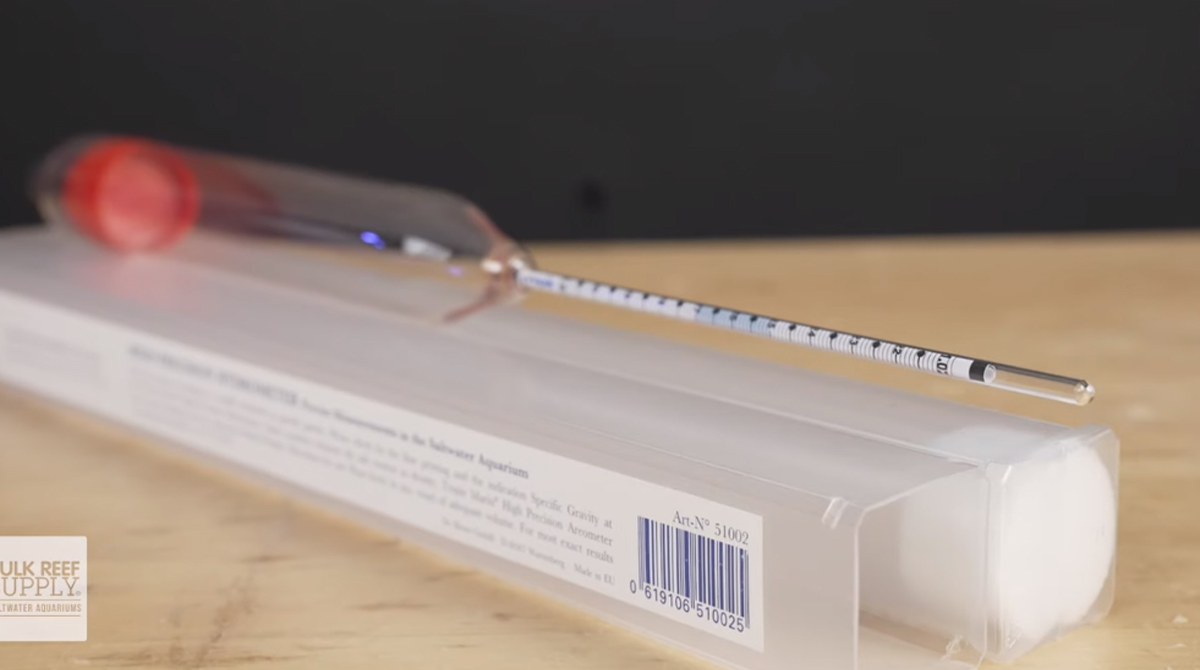 Better than a swing arm, a glass hydrometer is a special glass tube with a salinity scale inside, much like a thermometer.  The glass tube floats at a certain depth based on the salinity of the water.  Water density increases with salinity causing the glass hydrometer to float higher in the water. You then read the salinity using Specific Gravity (SG) at the waterline where it lines up on the scale. Seawater at 1.026 equates to 35 PPT.

These are great to have on hand for mixing saltwater and can maintain accuracy so long as you care for them. Being glass, fragility is an issue but they also must be used in a separate container. Water movement makes it impossible to use a floating glass hydrometer correctly so a separate beaker, graduated cylinder or tall container must be used to sample your water and take the measurement.

Without getting technical, a refractometer works by measuring how much light “bends” as it passes through the water. As the salinity in the water changes, so does the angle of the refraction, or “bend.” Refractometers are classically the most popular choice for saltwater aquarists, they are reliable and can be calibrated while also being affordable and easy to use.  They will provide readings using the Specific Gravity and/or Parts Per Thousand scale; most seawater refractometers will have a scale for both.

When using a refractometer, a drop of saltwater is placed onto the lens. Close the cover and point the refractometer towards a light source, like your tank or an outside window. Inside the viewfinder, a salinity scale is present and there will be a line of color change that aligns with your water's salinity level. Accuracy is only as good as your ability to read that scale and color change and you can focus the view by twisting the eyepiece.

When using a refractometer, checking calibration before each use is necessary because they can fall out of calibration quite easily.  A salinity reference solution should be used before every single use and if you find the readings are incorrect, calibration should be performed which is really simple. Using the same 35 ppt reference solution, turn the calibration adjustment screw until the refractometer reads correctly at 35 ppt. Rinse the lens and then proceed to measure your tank water.  By going through this two-step verification and calibration, you can be confident your measurements are accurate.

Also, be sure you are buying a refractometer made for measuring the salinity of seawater; refractometers can be used to measure any number of things, and are calibrated depending on what they were manufactured for.

Digital salinity meters are rising in popularity because the technology is becoming more affordable and are probably the easiest solution for a modern aquarist.  They work using conductivity (reliable) and can provide readings in Specific Gravity, Parts Per Thousand, and even Conductivity mS/cm in some cases. The readings are almost instant and you can quickly and easily check calibration before each use using 35 ppt calibration solution.

The salinity probe on your aquarium controller like the Neptune Systems Apex works using conductivity too. There are also specific conductivity meters that will provide the results using mS/cm conductivity which can then be converted to Specific Gravity or PPT with a formula, but who likes math these days?  The Hanna Instruments Salinity Tester is one of the better options that uses a conductivity-based measurement and is displayed as PPT or Specific Gravity.