Activated carbon is used in a reef tank for a variety of reasons and in many cases is one of the only ways to remove really difficult contaminants that would otherwise need to be removed via a water change.

In the minds of most reef hobbyists, carbon is employed for removing the tannins which results in clearer water, better light penetration, and overall improved appearance of fish and corals. 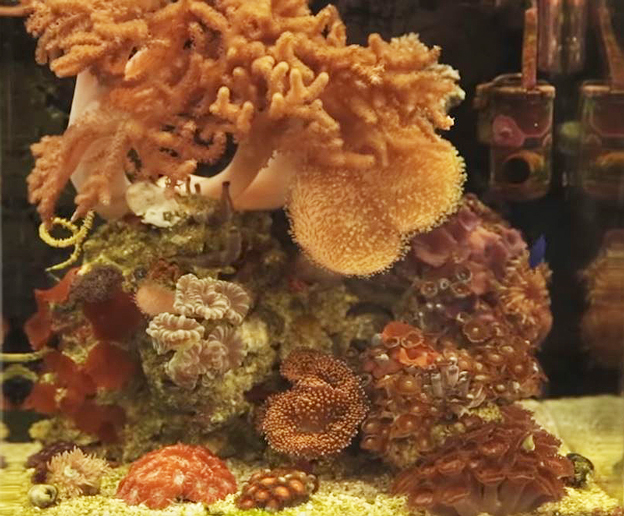 Surprisingly enough, pigments in the water column can block out as much as 30% of your light penetration to the bottom of the tank and it can actually be very difficult to gauge the severity. The yellowing is also an indication of pollutants building up in the water and take away from the general brilliant appearance of your reef.

Take a look at your tank when the lights are out because this is the best time to see just how yellow your water is. 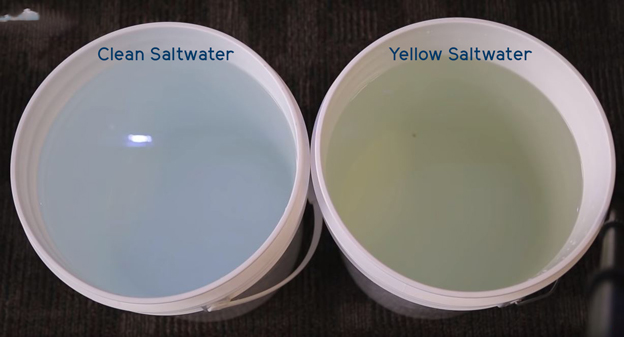 Better yet, next time you do a water change use a white bucket when pulling the old tank water out and you will see exactly how yellow the water is. Clean saltwater will be a crystal clear blue color and carbon can return even the dirtiest water back to this clear ocean blue color.

For many experienced reefers, carbon filter media is used as the first line of defense when something is not right in the tank and corals look irritated with retracted polyps or receding tissue. This is because carbon will remove many of the possible contaminants that irritate coral. 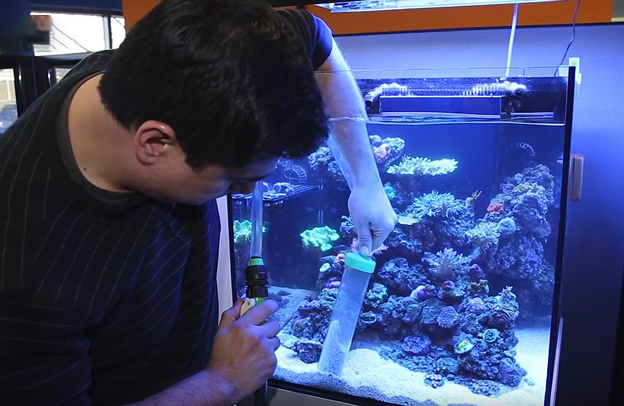 Regular use of activated carbon also provides a nice safety net against accidental introduction of undesirables via your hands or failed equipment.

At BRS, we sell three different types of carbon; Bituminous, Lignite and ROX0.8. Understanding the differences will help you to determine which carbon choice is best for your particular needs. 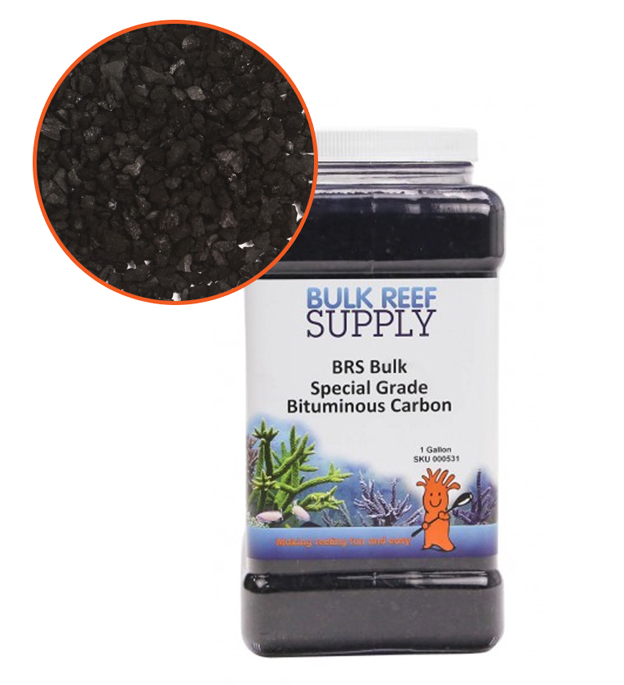 Bituminous carbon - economical and easy to use

Bituminous carbon is a coal based carbon with small pores making it harder which results in less dust compared to Lignite and ROX 0.8. Bituminous carbon is classically the most widely used type of carbon for aquarium applications and if you have used carbon in the past, this is likely what you were using.

The smaller pore structure makes bituminous carbon less efficient so you probably have to use +/- 50% more carbon to get the same results as higher quality carbons. It is, however, the most economical option and many reefers still prefer bituminous carbon because the minimal dust means it quickly rinses clean using a reactor or media bag. 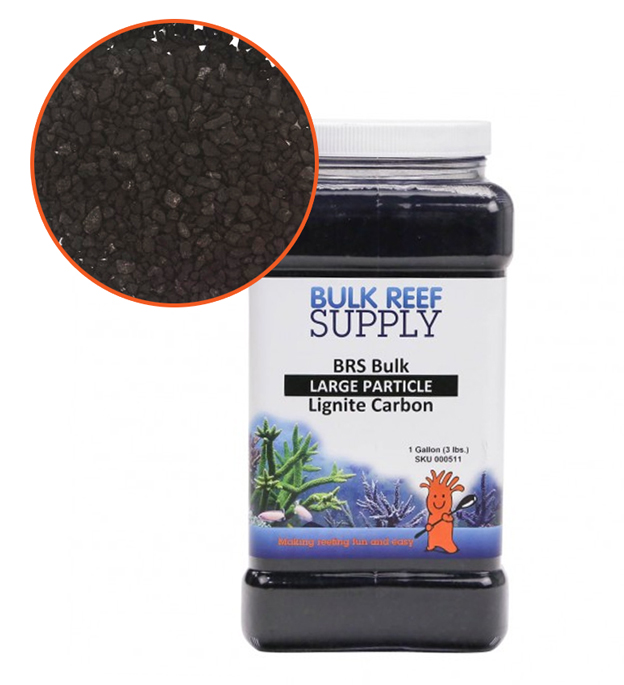 Lignite carbon is also a coal based carbon but has larger pores compared to bituminous carbon which is ideal for reef tanks because most of the contaminants are fairly large organic compounds. It will last longer, perform better and dollar for dollar is a better option that bituminous carbon.

The large pore structure holds more contaminants but also means lignite carbon is much softer which results in much more fine dust particles to rinse clean before use. To flush this carbon properly it will take considerably more effort, using a reactor is best to quickly force water through the carbon. Using a media bag under a faucet will be daunting, so much so that we recommend choosing some other type of carbon if you plan on using media bags. 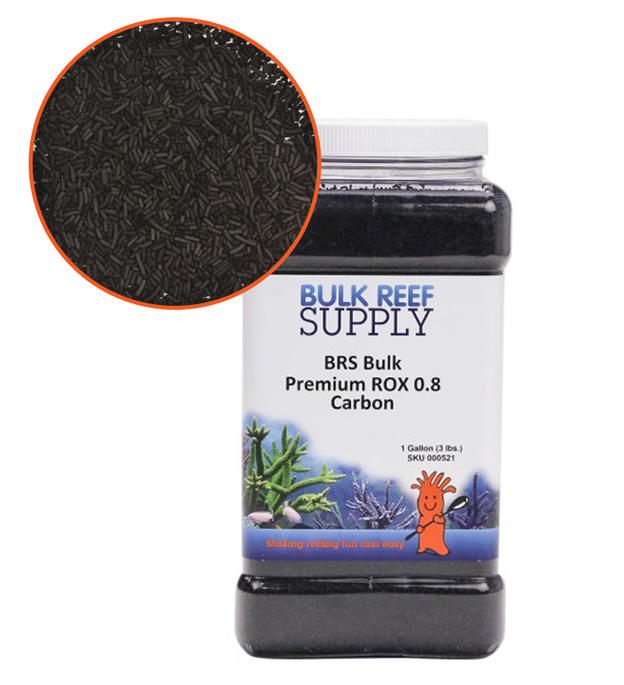 The ROX 0.8 combines the benefits of both coal based carbon options and then builds upon that to be the best carbon we offer. It is made from a proprietary blend of different raw carbon materials to create a wide range of pore sizes for optimal performance. Even though it does come at a higher price point, the capacity to hold more and a wider variety of contaminants means you can use much less to achieve the same results.

Rox 0.8 is unique in that it was specifically designed for water purification. It comes in the form of tiny little pellets which maximize surface area and reduce channeling of water through the media. 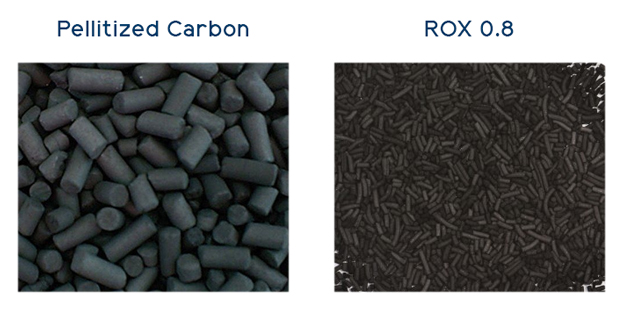 This is NOT the larger jumbo size pellets you might have seen from other companies which are actually intended for use in filtering air and are far less efficient at filtering water primarily because they cause channeling of water through the media and provide minimal available surface area. You would have to use 5-10 times more of the large jumbo pellets to achieve the same results as the smaller ROX 0.8 pellets.

Rox was originally designed for use in pharmaceutical applications. It is very effective and will not add anything into the water because it has been rinsed free of any manufacturing contaminants, such as phosphates, to meet the strict guidelines of the pharmaceutical field.

Rox 0.8 is also the hardest carbon we sell which means it rinses clean using a reactor or fine mesh filter media bag within a few seconds. 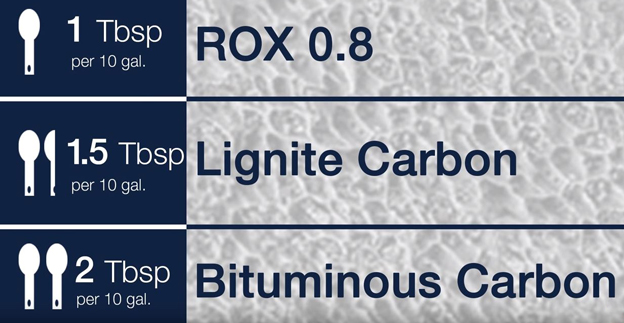 How much carbon should I use?

Most likely less than you think and we suggest starting small for general use with the guidelines above. If you need to target something like medication or are recovering from a failure you can change it out more frequently or using just a little bit more will not hurt 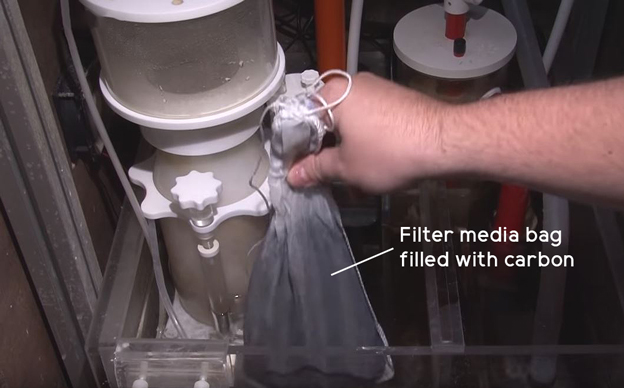 How to use a filter media bag with carbon

The two most common methods of using carbon is inside a filter media bag or using a fluidized media reactor.

When using a media bag, first ensure the bag pore size is small enough to hold the carbon securely inside. Rinse it using freshwater until all of the fine dust particles are gone and the rinse water runs clear. Don’t grind it together during rinsing because this creates more dust particles, just gently turn it over to rinse all sides.

Place the rinsed carbon bag in your tank or sump in an area of high flow. In between baffles, inside your filter sock, or hanging next to your skimmer outlet are all good choices.

Although a media bag is the cheapest and easiest way to use carbon, it is not the most effective. Using a media reactor instead is far more efficient because it will cycle every single drop of water in your tank multiple times per day and force water through the entire body of media for maximum exposure. 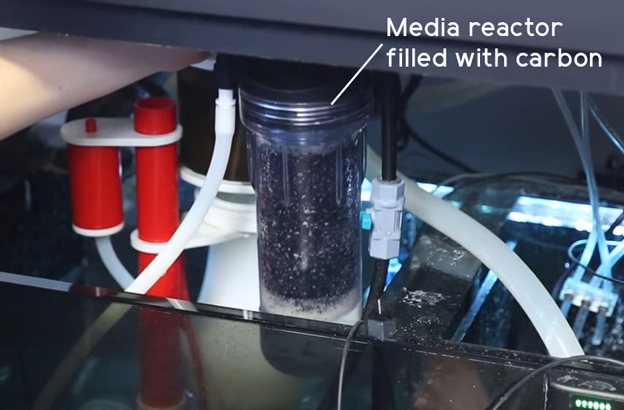 When selecting a reactor for carbon it is important to select one that has a method for securing the carbon in place so it doesn't tumble around. Tumbling may look cool, but even with the hardest of carbons it is just grinding against itself and creating more fine carbon particles which will be released into the tank. 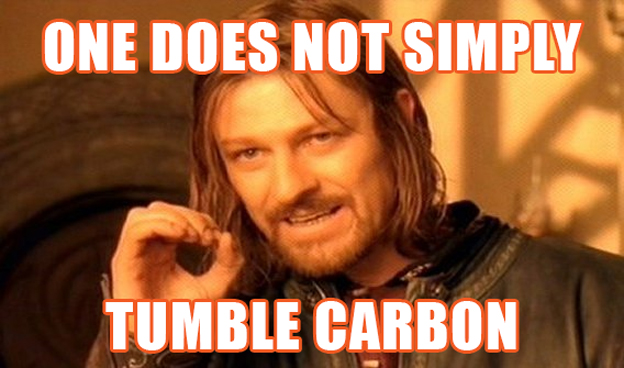 Never ever tumble carbon, there is zero benefit.

Our BRS reactor is really great because the design allows for easy cleaning and media changes. Just unscrew the canister from the metal wall mount and remove it for cleaning along with the internal cartridge. All of the pumps and cords can stay put so you don’t have to fuss with the plumbing every single time. 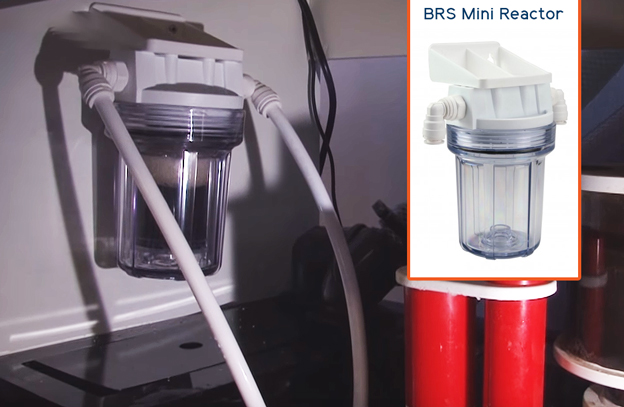 The Mini BRS Carbon and GFO Reactor is probably large enough and the smaller cartridge holds the carbon tightly in place. 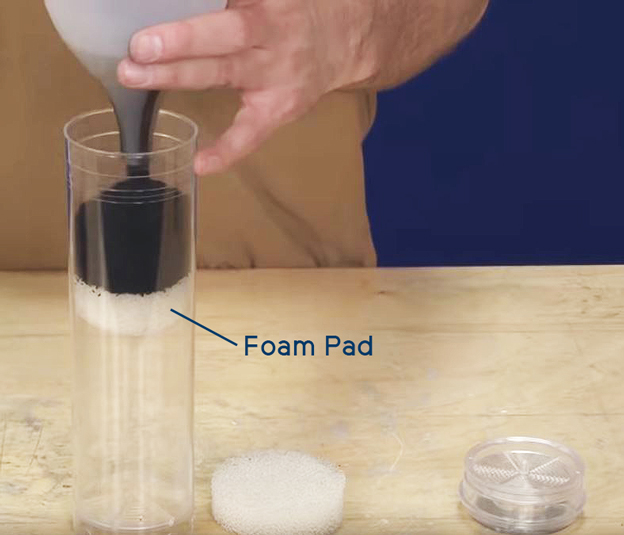 If using the larger 10” BRS Reactor, be sure to slide the foam pad into position so it secures the carbon without tumbling.

If you need something larger or prefer the classic acrylic design, you want to find something that can hold the carbon in place. Vertex has an excellent design with an adjustable plate that can slide up or down inside the reactor and accommodate the amount of media you need. 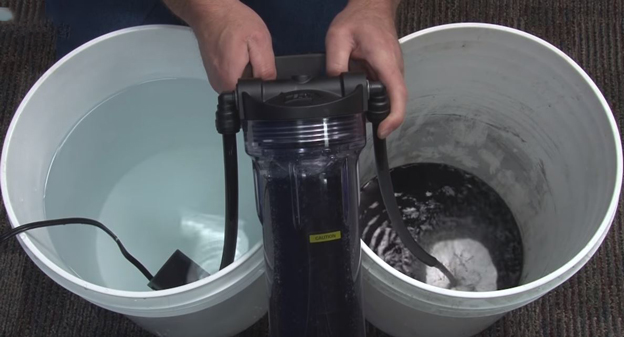 How to use a media reactor with carbon

Rinsing the carbon with any reactor is super easy, measure your carbon and place it inside the reactor being sure it is secure and will not tumble. Then just take the return line from the reactor and place it in a bucket. Turn the pump on to rinse the carbon until the water runs clear which normally takes less than 30 seconds with almost any type of carbon. If you are using soft lignite carbon, you might run it a bit longer just to make sure it is clean.

After rinsing, adjust your flow rate down to be fairly slow, just enough to create a constant stream and not tumble the media. This is not an exact science and because it is in a closed system which is going to get many pass throughs per day, it just isn't that critical that you get the flow rate perfect. Just understand that slower flow means more contact time, better performance and less detritus in the reactor. 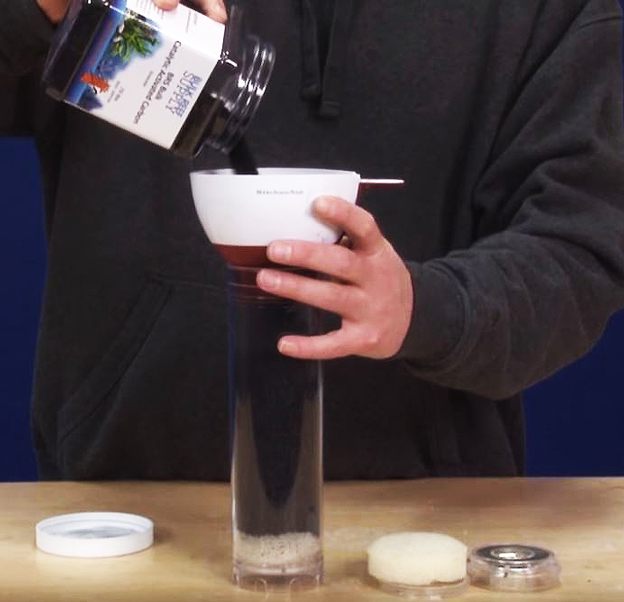 How long does carbon last?

Carbon maintenance is pretty simple, you just need to change it out periodically. Regardless of what any manufacture says, activated carbon in a reef tank actually doesn't last all that long.

The outer pore structure gets rapidly clogged with detritus and a bacterial biofilm which makes the inner pore structure unavailable fairly quickly. Another reason why the smaller pellets of ROX 0.8 carbon are a better option for a reef tank.

Carbon will become exhausted, for the most part, within the first week of use inside a reef tank.

For this reason, we suggest replacing carbon every 1-2 weeks alongside your regular scheduled maintenance (water changes). You can let it go as long as a month between changes but it probably is not doing a whole lot towards the end and there will likely be some organic build up. Using a little more than recommended will be perfectly fine to give yourself a bit more time in between maintenance.

Watch Video: How to get pristine blue water in your aquarium with carbon

View Playlist: All BRStv videos about skimmers, reactors and filtration