How important is the RIGHT flow rate for a UV Sterilizer in reef tanks? | BRStv Investigates

If you have built a reef tank, you probably experienced the ugly brown phase in which diatoms, cyanobacteria, algae and maybe even dinoflagellates grow on the surfaces inside the tank.


For the most part, we just deal with it and wait it out. These nuisances tend to clear up over time as the tank becomes biologically balanced and a maintenance rhythm is employed for nutrient export.


Beneficial bacteria takes time to grow and become stable enough to out compete these ugly nuisance organisms inside your tank. Unfortunately, this can be anywhere from 3, 6 or even 12 months into the process depending on the conditions inside your tank and exactly how effective your filtration and maintenance routine are.

Some reefers recommend being able to effectively reduce or avoid this “brown town” altogether by using clean live rock with a healthy living population of established bacteria already growing as opposed to sterile dry rock. In this case, the living rock could potentially infect your new tank with hitchhikers and nuisance algae that is alive and growing on the rock.

We asked ourselves, can a UV Sterilizer be the right tool to avoid the inevitable ugly brown phase of setting up a new tank? Within that, does the type of rock used (Live vs Dry) and the particular flow rate through the UV play an important role in eliminating the brown growth during new tank start up?

In order to do this right, we have to test tanks with dry rock and tanks with live rock both with and without a UV sterilizer in order to make the comparison. We also need to consider that you have two options for flow through rate based on the recommendations from Pentair for targeting either algae and bacteria or protozoa.

We set up 2 experiments using a total of six individual Red Sea Max E170 aquariums with an Aqua Illumination Hydra TwentySix HD over each tank. Because many of these organisms involved are photosynthetic, it is important to note the lighting is set at a spectrum many reefers use successfully and 100% output in terms of intensity. The lights all operate on a 10 hour photoperiod with one hour ramp up and one hour ramp down. 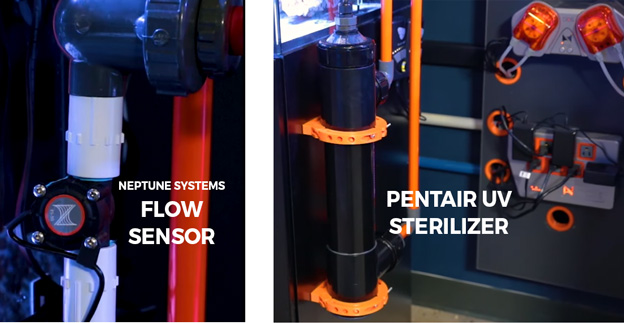 Pentair 18 watt UV sterilizers were used with flow rates monitored using the Neptune Systems Flow Sensor. Keep in mind that all six tanks are brand new, uncycled bare bottom setups which is probably the most difficult path possible for setting up a new tank, so the results today are based on this extreme environment. 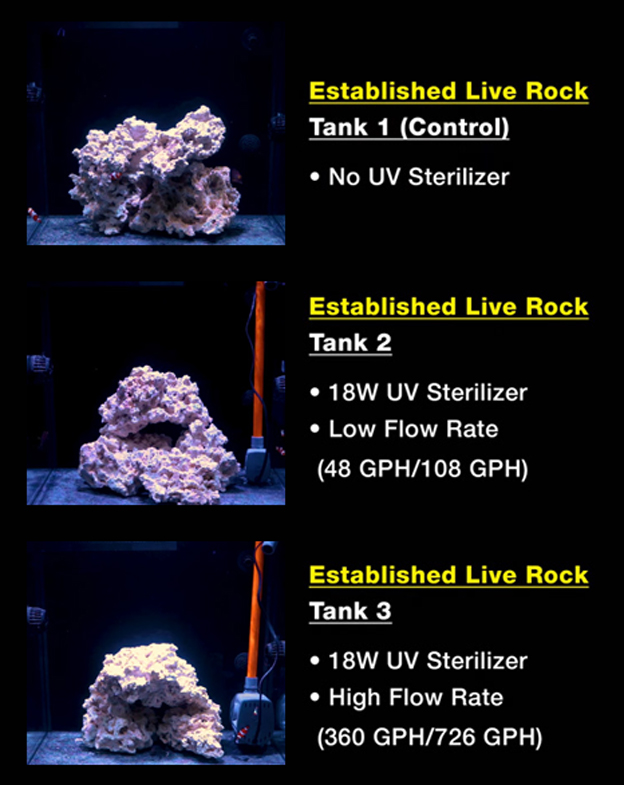 Experiment #1 LIVE ROCK - The first three tanks were aquascaped using equal amounts of seasoned or cycled live rock that we pulled from our large testing/storage sump here in the BRS lab. All of this rock has potentially been exposed to a variety of different algae, bacteria and various possible hitchhikers. 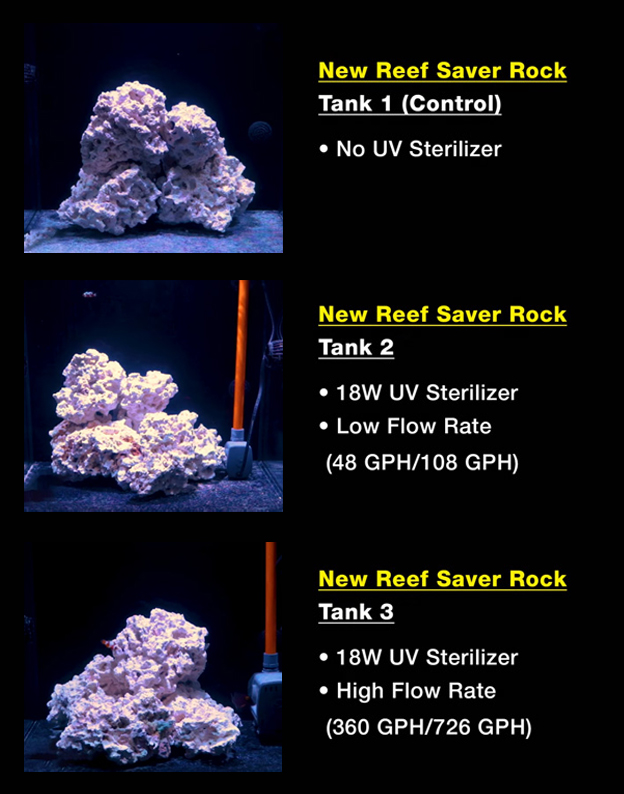 
All six tanks were monitored visually over the course of 8 weeks and we documented the changes on a weekly basis. Needless to say, we are excited to share the results and really think we are on the verge of changing the way UV sterilizers are used on aquariums.

During the first two weeks, we really observed no change whatsoever in all 3 of these tanks. The rock remained the same with hardly a spec of brown. Maybe one or two small spots less than a dime in diameter could be found upon a detailed inspection.

In week three, tank #1 and #2 start to show signs of brown growth and in tank #3 the rock surfaces remain clean.

During week 4 four, the real fun begins and we start to form a conclusion. We see what was later identified as Green Ulva or Sea Lettuce begin to cover all surfaces of the rock exposed to light but only in tank #1 and tank #2. In tank #3, the algae starts to appear but nowhere near the extent as what is observed in the other two tanks.


This leads us to believe that the UV sterilizer set to kill algae and bacteria is working to slow down the spread of algae but will not stop it from growing if it is already on the rocks.

This trend continues throughout the remainder of the experiment with algae continuing to grow on the surfaces exposed to light and eventually spreading onto the bottom of the tanks. By the end of week eight, all three tanks were covered in identical and similar amounts of algae growth.

Tank #3 using a UV sterilizer set to kill bacteria and algae certainly appeared to have slowed the spread of algae. With that in mind, the UV will not be a complete solution for any algae that is rooted or already growing on the live rock and that algae will still eventually spread if left unchecked. It works as a supportive measure to slow it down, but won’t stop it or kill it altogether.


Interestingly enough, we did not notice any bacterial blooms or associated problems presumably because of the established bacteria on the rock.

Much like the first experiment, in the first two weeks of dry rock testing we see all three tanks remain essentially unchanged.

After three weeks the control tank#1 with no UV sterilizer began showing signs of a potential bacteria bloom with a slight cloud or haze throughout the entire water column while tank #2 and #3 with the UV remained crystal clear. The first signs of brown algae or diatoms also start to show up but check out tank #3, the rocks are still completely void of any growth.

Week four really shows a visual difference between all three tanks. The haziness in the control tank #1 became thicker and Tank #2 actually looks the worst with brown diatoms or algae growth on a majority of the surfaces. The real kicker here is tank #3 which still looks unchanged with clear water and white rocks.


At face value through the first month, the UV sterilizer set to the proper flow rate for algae and bacteria sterilization seems to prevent or slow down not just the same bacterial issues we saw in the control tank but also the spread of algae or bacteria throughout the tank.

This trend continues through week five and six and appears to be worsening. Tank #3 with the UV set to kill algae maintains the crystal clear water and and just some minor green algae on the rocks. Tank #2 gets worse in terms of brown diatoms or algae and tank #1 is experiencing a full blown bacterial bloom.

In week seven the cloudy water in tank #1 seems to be dissipating but is being replaced by more green on the rock and glass. Tank #2 is gaining in brown looking matted algae growth and the dusting of green in tank #3 continues to spread onto lighted surfaces of the rock.

Surprisingly after eight weeks or two months of testing, the control tank #1 without UV has mostly cleared up and in its place the rock is showing the beginnings of some brown bacterial or algae growth. Tank #2 with its very slow turnover rate through the UV sterilizer has evened out to growing a light brown fuzz on nearly all surfaces of the rock and some on the bottom of the tank and tank #3 which was showing promise over the previous 7 weeks, has now developed similar fuzzy brown algae growth on the rock surfaces and very prominently on the bottom of the tank. 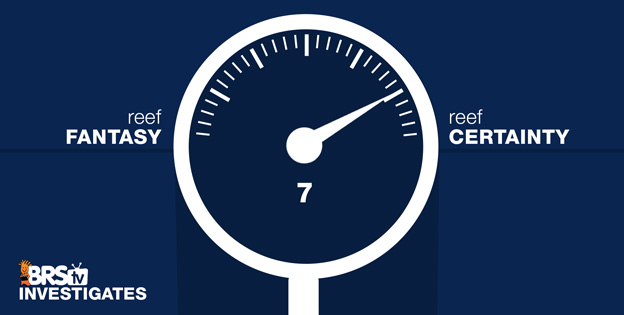 This one gets a 7 out of 10 on the Reef Certainty scale since in both cases of using established live rock and new dry rock, we did see differences in the growth rates of algae among the different flow rates but it was not a complete homerun in terms of keeping algae out of the tanks.


We also see that a UV sterilizer optimized for sterilization of algae and bacteria (higher flow rate) kept the tanks free of a severe bacterial cloud. 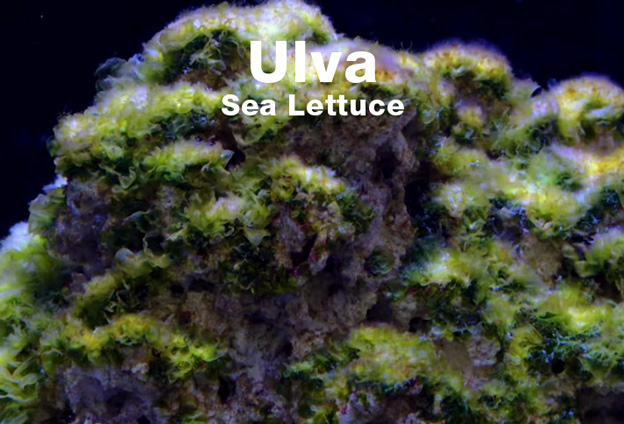 We can take away a few things from this experiment for certain. Coralline algae was spreading in all three tanks with seasoned live rock regardless of the UV being on the tank. The problem was nuisance algae was already unmanageable by the time the coralline showed up.


This confirms the challenges of using old live rock, you can never really be too sure what is living or going to grow on that rock. It was obvious the rock was clean when we first introduced it into the tank and we had no idea that Sea Lettuce was going to show up until one month into it. Exactly why dry live rock is becoming preferred over the cycled or even wild collected live rock of days past. 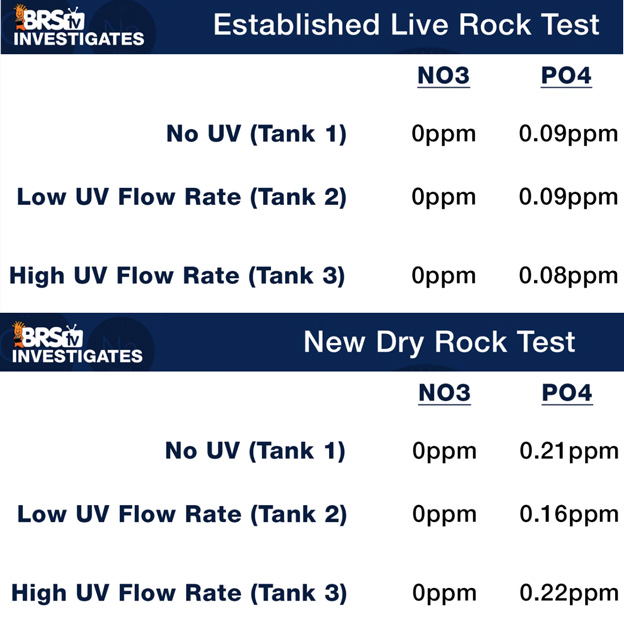 Just for reference we took measurements of Nitrate and Phosphate in all six tanks. As you can see all of the tanks were severely limited by nitrogen and all of them had very similar phosphate levels, so the lack of nitrogen could have absolutely played some sort of role in all of this.


In terms of a UV sterilizer helping to avoid pesky algae growth during start up with dry live rock, our experiment is inconclusive. It did work to keep the tanks free of a nasty bacterial cloud but all three tanks experienced algae growth that most any reefer would deem problematic. 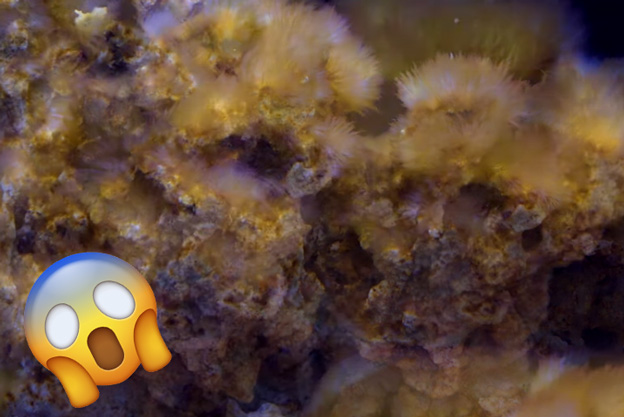 Why would the tanks with a UV sterilizer grow something completely different than a non-UV tank?


Certainly more questions to answer which only means more exciting experiments are coming your way. We’re going to tear down all six of these tanks, clean and sterilize them then start over and make some changes to our approach.


The first change will be to remove the algae grazing Kole Tang and Lawnmower Blennies as their natural diet of algae could certainly skew our results. Secondly, we will toss out the idea of using old live rock altogether and use only dry live rock in all of the tanks. The extra tanks will be used to double up our test tanks because redundant results is going to help make the most compelling case.

We also have bounced the idea of following trends in phosphate and nitrate levels to try and see how they may be tied into all of this and maybe even take a closer look at the rock and water using a USB microscope.


Curious to learn more about nitrate, phosphates and how a refugium can help you control these waste parameters? Check out our 4-part video series all about refugiums a chaetomorpha macroalgae which has grown to be our most popular BRStv Investigates series of experiments because of the valuable lessons we learned through our tests and experiments.