There is no shortage of research articles about the effects of ocean acidification on coral reefs. Many of them stating that a drop in pH as little as 8.2 to 8.1 are having major impacts on coral growth, larval survivability and the overall health of a wild reef. It only makes sense to assume similar effects would happen in our captive reef tanks.

For what it is worth, there is clear science as to why we should see better growth rates among corals when raising pH in a reef tank to 8.3. 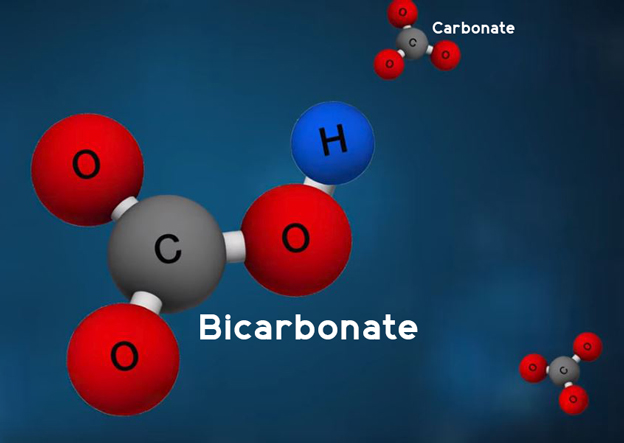 Within the coral tissue, it is predominantly combining bicarbonate alkalinity and calcium ions to create its calcium carbonate skeleton. The coral has to maintain a fairly high Ph within its tissue in order for this process to occur.

The byproduct of that calcium carbonate creation is the release of hydrogen ions, that hydrogen now contributes to acidification inside the coral’s tissue. In order to get rid of this hydrogen and maintain the higher pH it needs to grow, the coral more or less just pumps the excess hydrogen through the tissue back into the surrounding tank water.

So this is where this comes together in terms of coral growth and metabolic health. At a pH of 8.3 there are relatively few free hydrogens in the water which means it is easy for the coral to free itself of the excess hydrogen and therefore maintain that optimal internal pH.

Since pH is a measure of the free hydrogen and each pH point represents a change in hydrogen by 10, if we drop the pH around the coral from 8.3 to 7.8, there will now be 5 times as many hydrogen ions in the surrounding tank water. This makes it much more difficult for the coral to free itself of hydrogen that is locked up in it’s tissue.

Exactly how much more growth can happen in our reef tanks by maintaining higher pH levels; 10% more, 20% more, is it even measurable? 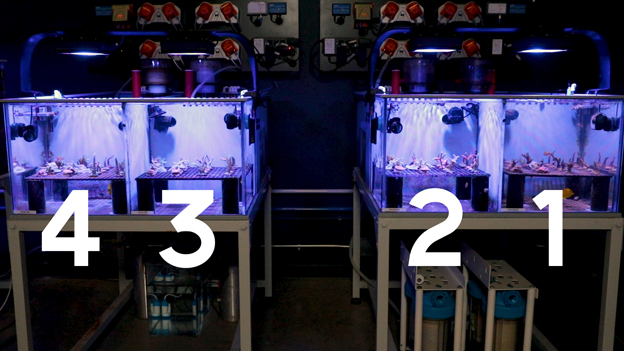 We used our side by side A/B test tanks to create both a high and low pH scenario.

The first two Vertex A/B test tanks are running a pH of 8.3 by using a CO2 scrubber attached to the protein skimmer to remove excess CO2. This simulates a well ventilated room with limited CO2 accumulation.

Tank #3 and Tank #4 are running a stable 7.8 pH, 24 hours a day. This is accomplished by injecting small amounts of CO2 into the protein skimmer with an electric solenoid and Neptune Systems Apex Controller that is set to maintain the pH at 7.8. The added CO2 simulates the same effect of people and pets breathing in a closed room which is the direct cause of lower pH levels in most reef tanks. 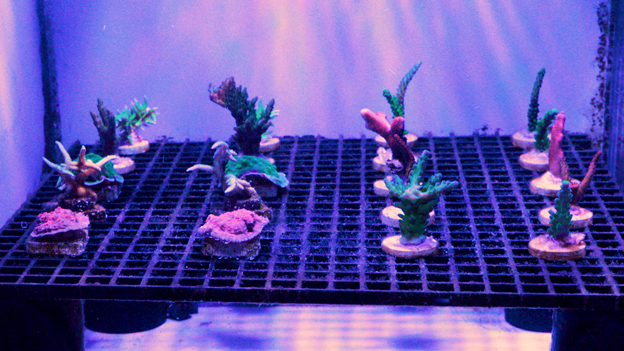 We added 2 examples each of 10 different coral species into all four tanks and will be measuring the growth via weight.

The reason we have redundant test tanks is because the results are much more compelling if they are repeated. There are just too many variables in a reef tank to look at just one set of test tanks. So in that spirit, we are treating each set as a separate experiment just so we can be certain it is not some other variable affecting the growth. What actually happened in our experiment proved this to be a smart approach.

Before even looking at the measured weights of these corals we can see a difference based on alkalinity consumption. It took almost double the dose of alkalinity to maintain 9 dKH in the tanks with a pH of 8.3 compared to the tanks with a pH of 7.8. This increased consumption indicates a higher rate of calcium carbonate creation (growth) in the higher pH environment. 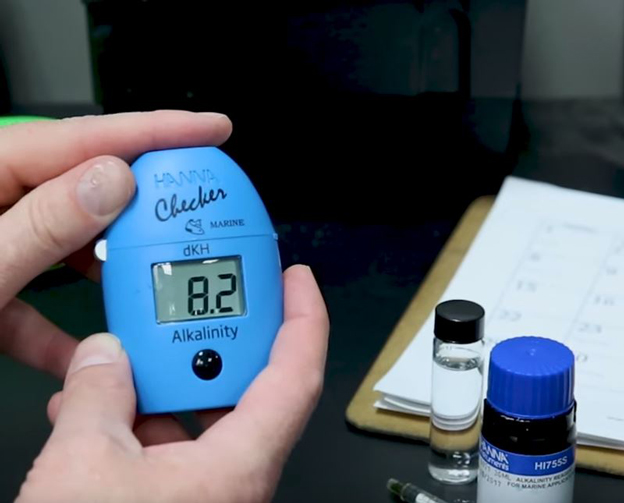 Alkalinity consumption is one of the best tools reefers have to measure success. It can often give immediate feedback if the changes you are making are producing desirable results. More alkalinity demand means more growth and vise versa.

Related to that, we ran into an algae issue in one of these tanks in which undesirable algae irritated the corals and slowed growth. As soon as the algae took hold, you could see the alkalinity consumption drop indicating halted growth. The fact that we set up two identical experiments means our test was not a complete failure and the result was two different data sets that help paint a very clear picture of both the effects of pH and algae growth on a corals ability to grow. 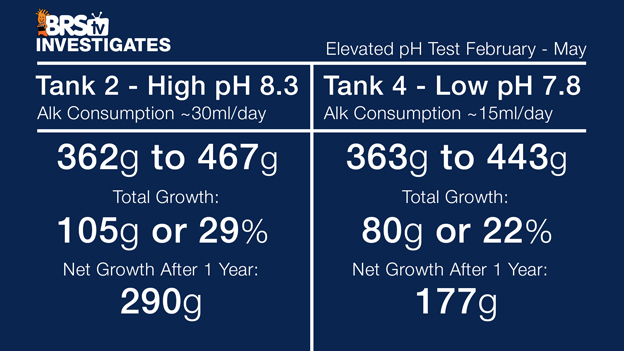 We let the corals grow for a total of 3 months and this is the results from the pair of test tanks that DID NOT experience an algae bloom.

That net result is the high pH tank grew 32% faster than the low pH tank by weight. This was further confirmed visually because it was quite obvious the corals in the higher pH environment grew faster. 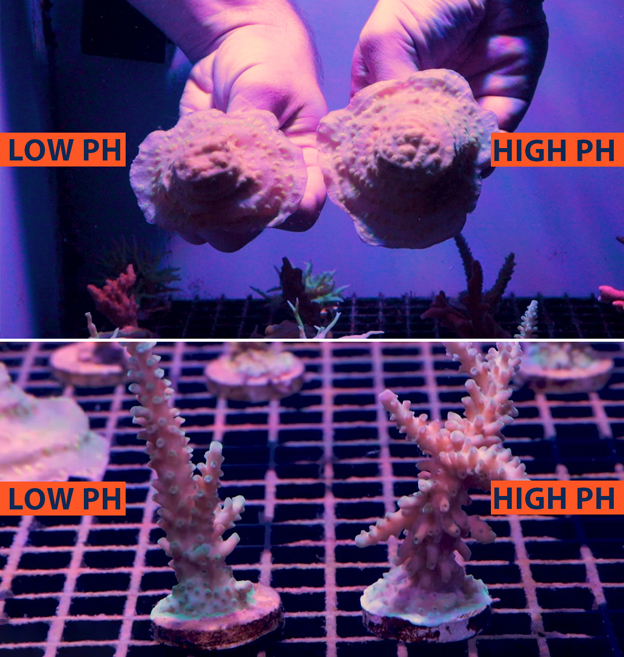 Many of the corals in the high pH tank also encrusted the plug much faster. Just obvious visual cues the corals are growing faster in a more optimal higher pH environment. This isn't surprising because it matches what basically every marine biologist would expect, but it does assign some actual expectations in terms of the amount of increased growth we can expect to see.

It is important to note that not every coral grew faster, 8 of the 10 high pH corals showed positive growth over the low pH corals. Indicating that maybe sensitivity to this change in pH is somewhat species specific.

As for the second set of test tanks in which algae started to grow, we essentially deem this set a failed experiment because the external factor of algae significantly affected the results. Just like any newly set up reef tank, managing pest algae can be difficult. This was particularly severe in our case because common clean up crew options of snails and crabs are not very effective on egg crate.

For the first 30 days in test tank #1, the alkalinity consumption was consistent with our first set of test tanks. The higher pH tank needed about double the amount of daily supplementation to maintain a dKH of 9. Once the algae started to grow in the higher pH tank, we noticed the alkalinity consumption drop and eventually leveled out with the lower pH tank. 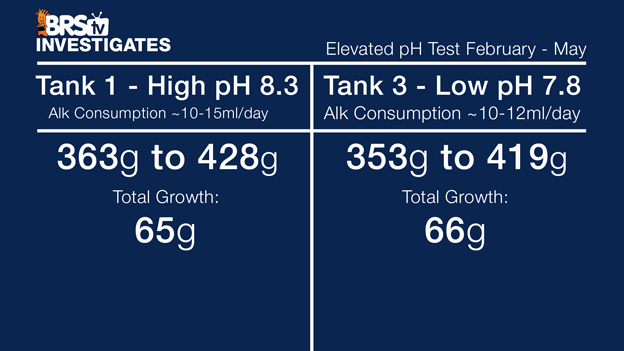 Test Tank #1 with a high pH of 8.3:The combined total weight grew from 363 grams to 428 grams for a total growth of 65 grams after experiencing an algae bloom 30 days into our experiment.

Watching the alkalinity consumption differences prior to the algae issue, I think there is a strong indication that this experiment set would have replicated the other if we had not ran into the issue of algae growth irritating the corals. 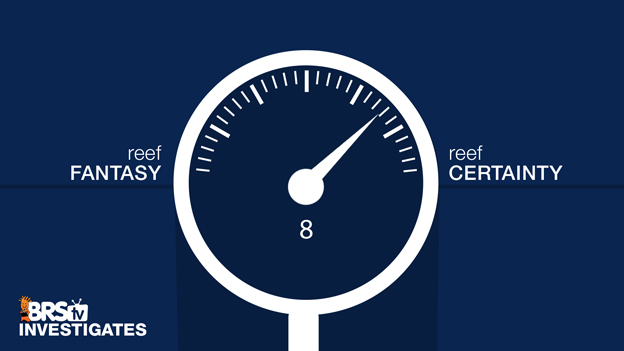 We gave this an 8 on the scale leaning close to a definitive reef certainty. The experiment proved what the science suggests but also gave us a better idea of exactly what to expect in a reef tank environment.

For reefers with pH issues, this turned out to be a very valuable data set as they attempt to understand whether it is worth the effort of elevating pH levels, even in small increments. The proposed benefit of refugiums, CO2 scrubbers, kalkwasser, proper ventilation and two part solutions made with soda ash are essentially confirmed.

Maintaining higher pH levels closer to 8.3 can result in more rapid coral growth when unaffected by other variables. 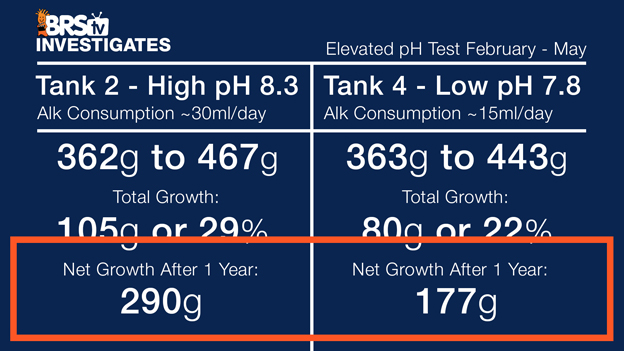 To further substantiate our findings and see what happens over a longer period of time, we let the two test tanks unaffected by algae continue to grow. The net growth after 12 months was almost double in the higher pH environment. This suggests that there is potential to grow a tank out in nearly half the time when maintained with a pH of 8.3 which is valuable to reefers everywhere.