At Marine Depot, we are privileged to share with you a new and exciting announcement from Neptune Systems. All of the controllability and wireless functionality that you have come to love from Neptune over the years will now be on full display within their brand new SKY Reef Aquarium LED Light Fixture.

Neptune has been one of the industry leaders in producing high-quality, controllable, and detail-oriented products that can operate within their own ecosystem. Most of their products are enhanced by the use of either a Neptune Apex or ApexEL controller which have become one of the most desirable products on the aquarium keeping market. With the introduction of the SKY LED, Neptune has added yet another tool to the arsenal of their Apex Fusion Ecosystem.

Rest assured that this isn’t just a quick venture into the lighting world for Neptune. The details of this light that will be further discussed below show just how much research, development, and perfecting went into the creation of this fixture. It is with true excitement that we get to say that the future of reef aquarium lighting is upon us.

“The SKY is a 200w, LED aquarium light, with patented diffuser technology, that smoothly blends all of its 104 LEDs to create a homogeneous field of coral-health-optimized light — no hotspots, no disco-ball effect, no need to augment it with other lights or add-on diffusers — but best of all, none of the harsh shadowing and fractured spectrum found in most other popular lights.”

Each LED fixture will allow for coverage of up to 24” X 30” for SPS centric systems and up to 30” X 36” for less light demanding corals. These measurements should be used as a guide when deciding how many fixtures will be needed for your aquarium. Regardless of the number of fixtures you need, rest assured that they can be easily programmed together.

“The SKY has 104 carefully curated LEDs, split into four controllable channels, spread across a large surface to maximize the area of light origination and minimize shadowing. Then the SKY uses patented light engine technology that mixes some of the light from all the LEDs right inside the light panel. Then that light, along with some of the direct light from the LED, all pass through a carefully selected diffuser panel that evens out all the light while minimally reducing the light output. The result is a well-blended light output, that has the same spectrum, nearly everywhere in the aquarium, with minimal shadowing and no disco-ball-effect.”

Neptune sought to create an LED unit capable of replicating the stunning shimmer on full display in many of the world's natural reefs. Neptune quickly realized that using a typical diffuser needed for the LED’s spread was going to remove any semblance of the shimmer they desired. They eventually developed a diffuser with four clear sections that allow white LEDs to shine through and give off plenty of shimmer. Additionally, when it comes time for your moonlights to come on, four fully dedicated LEDs in two unique colors will come on and simulate the moon’s current light cycle. The moonlights will also give off some great nighttime shimmer. A "Shimz" LED Diffuser will also be offered for those who prefer to have less shimmer coming from their system. 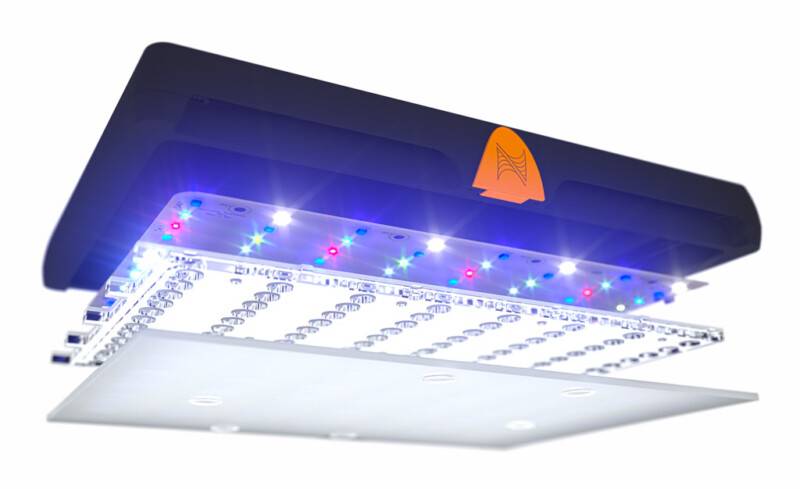 This fixture is feature-packed and none of them are more unique than the fact that this LED system can operate as a standalone unit. This is due in part to its wireless controllability through a mobile smart device. That being said, for those hobbyists who prefer to control their LED’s through their Apex Fusion interface then, you can connect the SKY to your controller through the included AquaBus Y-Cable.

Neptune sought to simplify the initial setup and programming of the SKY LED while still providing advanced controllability options for hobbyists who know exactly what they are looking for. Once the light is powered on and either connected to your smart device or your Apex Controller, Apex Fusion will ask you a couple of questions about your system while showing you some display spectrums. They will ask for your preferences and work with you to create the perfect schedule. All of the spectrum options will already be pre-set to maximize coral color, health, and growth. Rest assured, however, that there are plenty more advanced controls for those who really like to explore the full capabilities of their equipment. 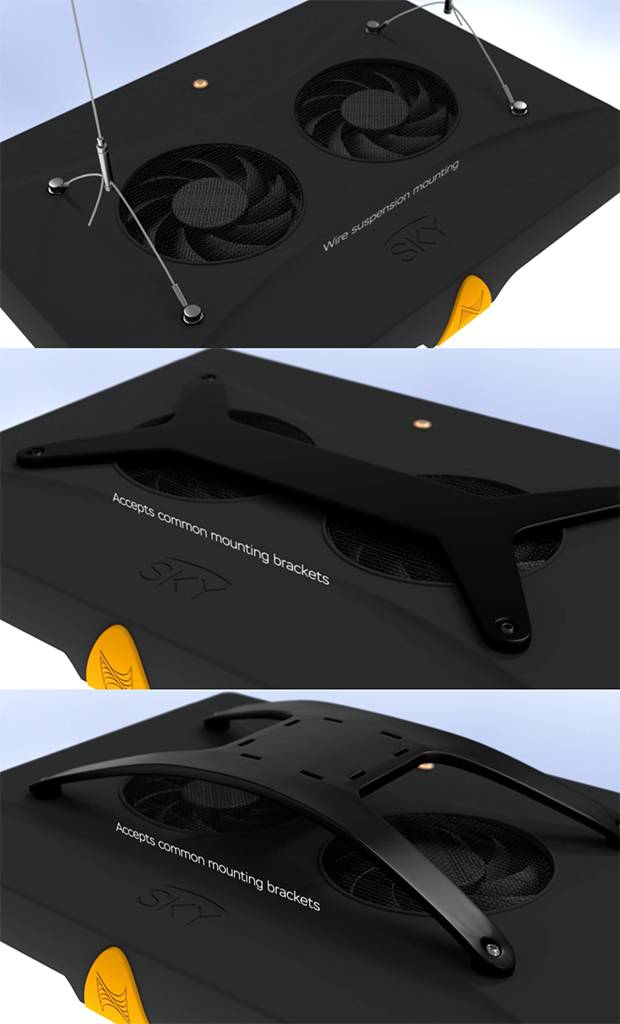 The SKY is near silent in operation due to its advanced thermal management system with both a large heatsink and two cooling fans. Having multiple fans on the fixture allows them to operate at lower speeds thus, not creating a lot of sounds. Despite the large heat sink, this fixture still has a very low profile. At just 1.75” thick and weighing less than four pounds, this system will look great mounted above your aquarium. Speaking of mounting, this fixture is fully compatible with Ecotech Marine’s RMS Mounting Arms for their G5 Radion LED Fixtures and more compatible mounting options are on the way. Additionally, a hanging kit can be purchased to have your light hung at a desired height.

It's safe to say that we are more than excited to see the Neptune SKY LED in action. For more details regarding this exciting new fixture and its features, you can head to Neptune’s Page discussing its release. Stay tuned for more new content regarding this release and, be one of the first reefers to get your hands on the new Neptune SKY LED!