Aquascape Examples for Inspiration In A Reef Tank 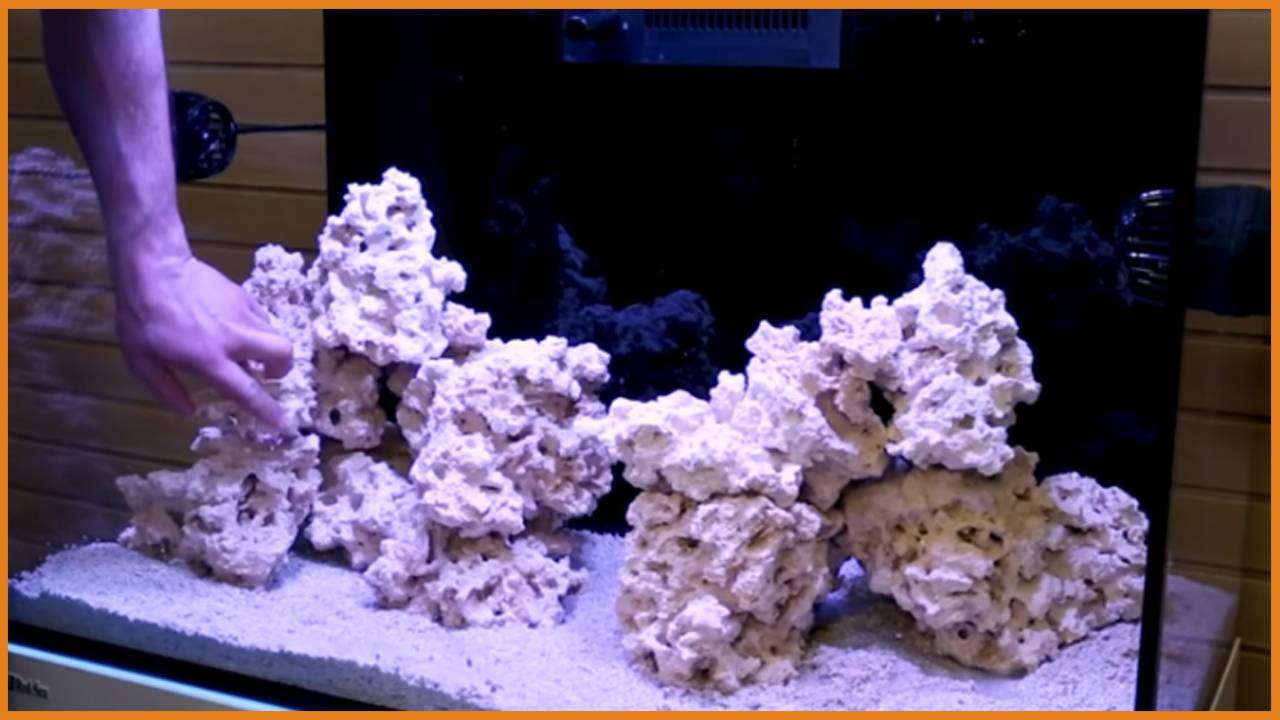 An aquascape is what aquarists call a structure of rocks inside an aquarium used to provide habitat for the tank inhabitants but also act as the foundation for biological filtration. Like a landscape in your tank.  In recent years, hobbyists have run with the idea of creating visually appealing "aquascapes" to help compliment the overall aesthetic in the aquarium.  Here are a handful of common approaches to aquascaping a saltwater aquarium or reef tank that will hopefully inspire you when it comes time to build your next aquascape.

Two Islands and a Trench 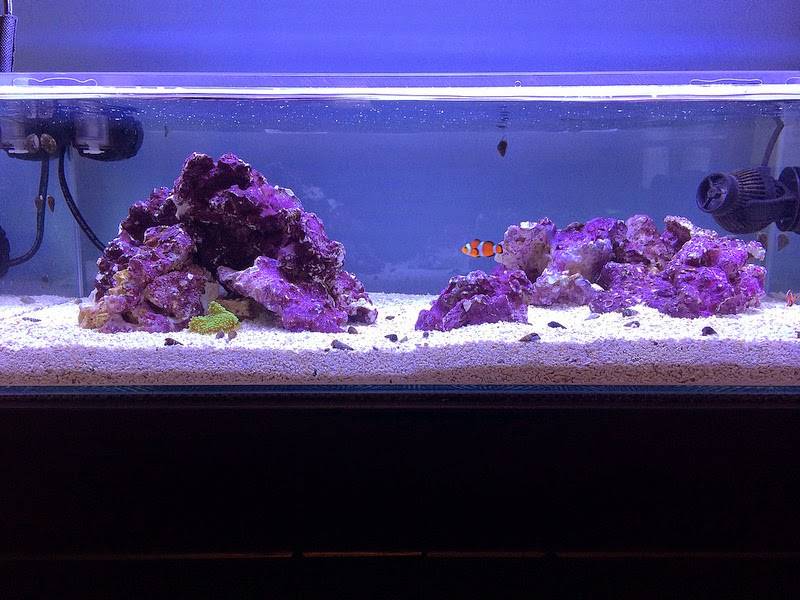 Two rock islands, of varying heights, that allow for open sand on all four sides between the rocks and tank walls. This allows room for easy cleaning of the glass but also gives the structure some "breathing room" in terms of the way it looks in the aquarium. The varying heights will allow for plenty of space for corals and create a sense of depth in the tank.

Great approach for long or rectangular-shaped aquariums and looks great in a shallow tank.

Waters surrounding the island of Tonga are known for both shelf rock and branch rock, both of which can create a visually stunning and unique aquascape. While we can no longer collect and acquire naturally collected Tonga live rock, there are some synthetic or man-made branch and shelf style rocks that work just the same.

Shelf and branch rock can be extremely difficult to work with. Shelf rock lays and stacks nicely but doesn't look natural while the branch rock is almost impossible to stack in a manner that doesn't just look like a pile of branches or sticks.  That being said, if you take the time to mix some natural base rock and epoxy/glue the branch in the right configuration you can create some extraordinarily unique. We cannot say there is one right way to aquascape but when it's done well, you just know it.

The tank pictured owner above capitalized by creating a weighted aquascape with a majority of the rock stacked on the left side while still following the "rule of thirds" which results in a visually appealing layout. There is plenty of places for coral and once this scape is covered in coral, you just know it's going to look awesome, not to mention all of the crevices and overhangs for fish to inhabit. 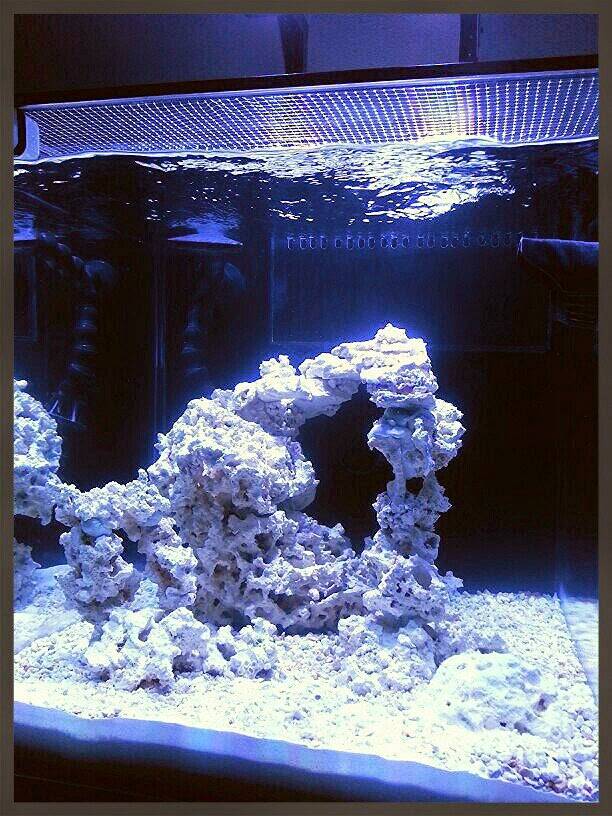 Just a unique and interesting design that looks great in small tanks or taller aquariums. You have to be clever when constructing large arches like this with strong adhesives and plenty of curing time before placing the scape in your aquarium and adding water. 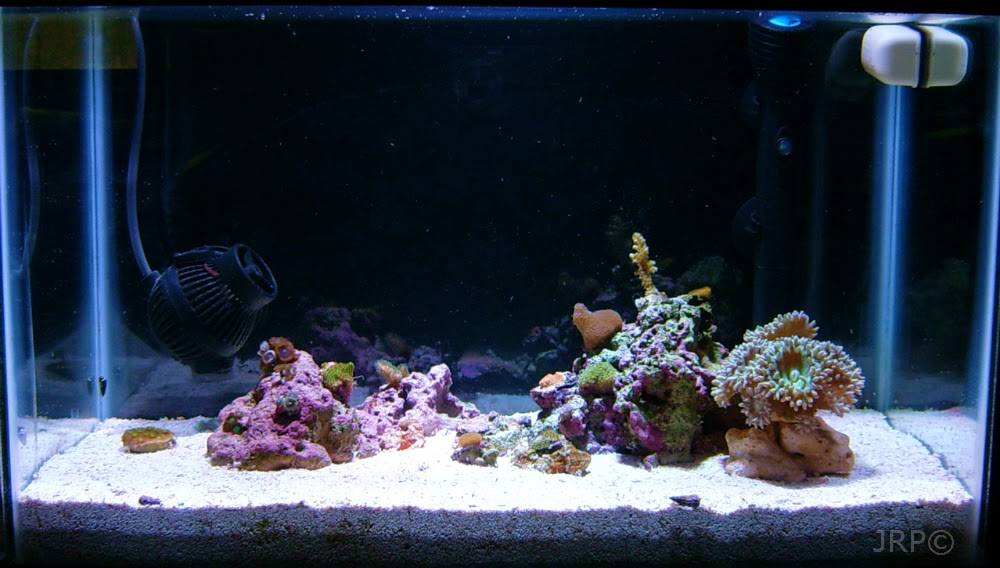 Bombora, or bommies, is an Australian term for waves that break over a shallow area of a reef. This minimalist scape does an incredible job of showing off just how beautiful those bommies can be. Creating open space like this compliments the coral themselves and once those corals grow large, the tank looks far more impressive. The hard part with this approach is you can only choose a handful of corals so it is not for the frag collector.

Using large and fast-growing corals plays well with small islands like this. You can quickly fill in the space and it creates a very natural-looking scene inside the tank.  Base Rock that is cut flat on one side works awesome for this build and really looks great in shallow or lagoon aquariums. 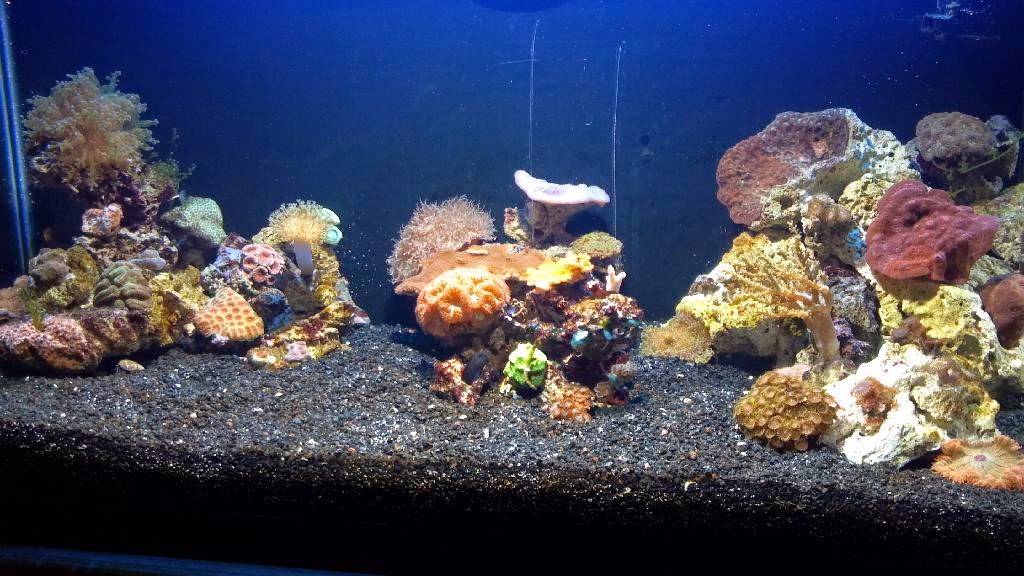 Trenches create a sense of depth in the aquascape and if you can manage to build two of them while still leaving plenty of open sand bed, it makes the tank seem larger than it really is. This approach also opens up some great real estate for planting coral. Rather than a vertical wall, you have a whole "hillside" of suitable places to glue corals. 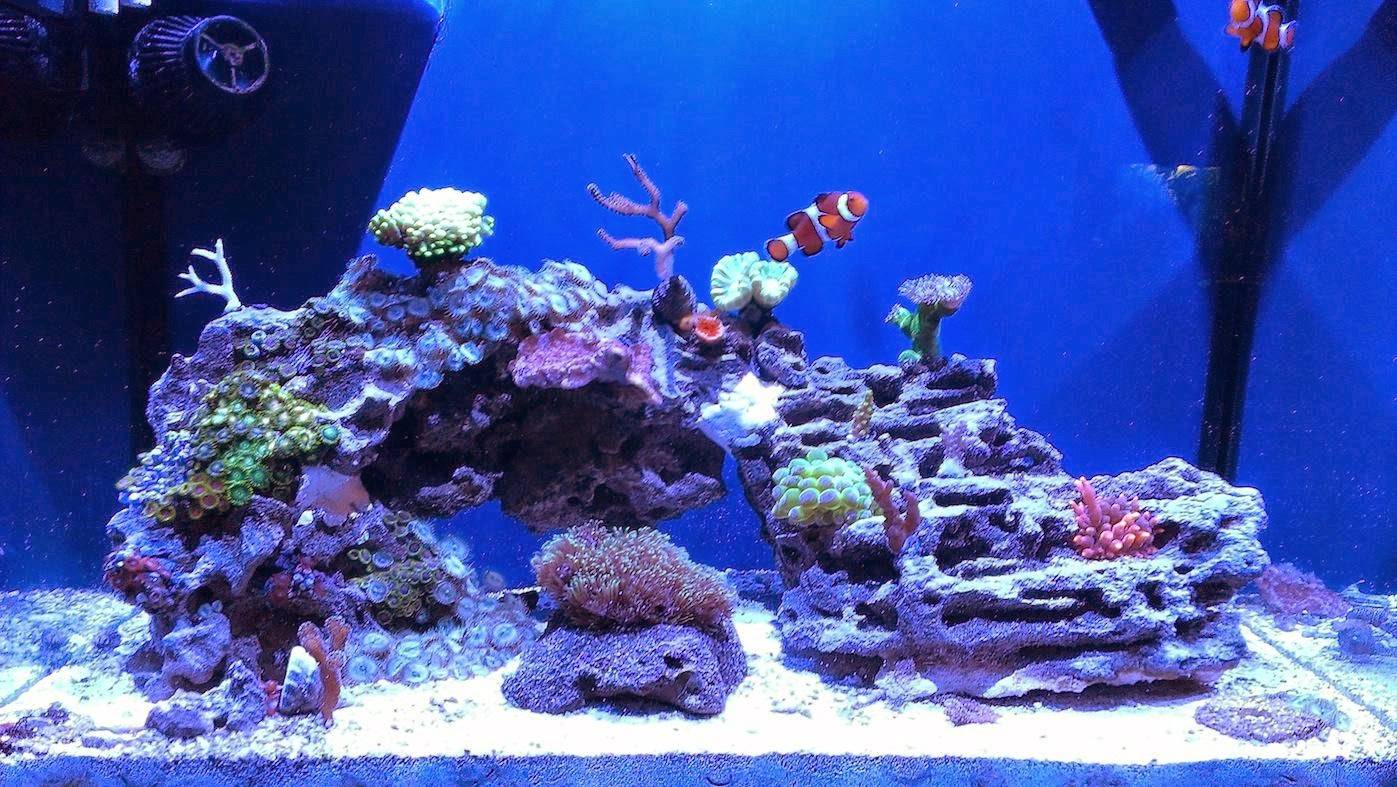 This single, massive arch plays in contrast to the trench and island aquascapes that we've seen. The rock arch itself looks cool and once you have a full head of coral, it really starts to evolve creating a sort of floating island of coral. 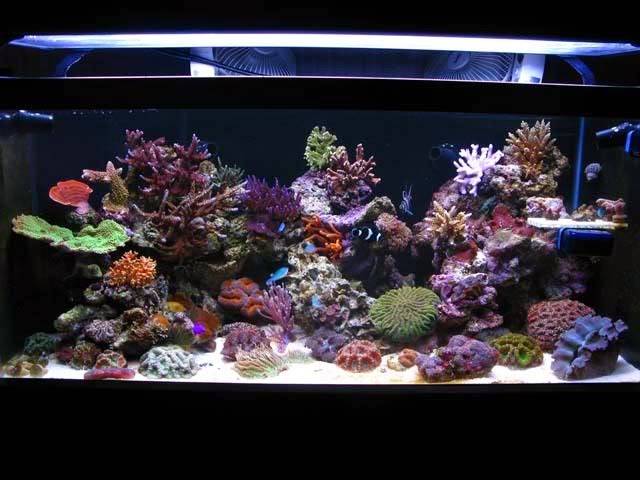 This is a great way to gain height in the tank without having one massive pile of rocks. You get the benefits of the deep trenches while also filling the entire water column, top to bottom, with something to look at.

Three Islands (and a Bonsai!) 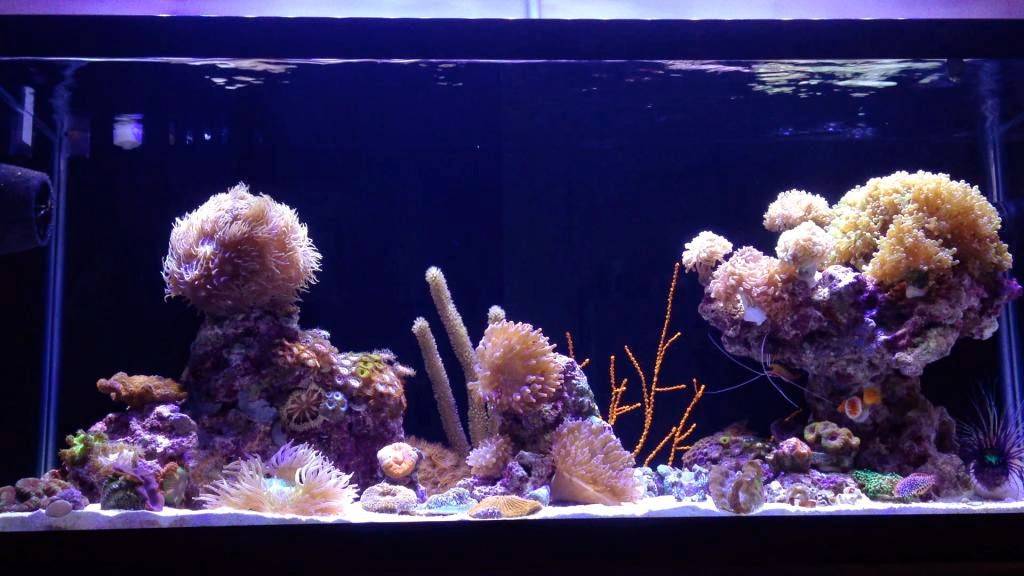 This unique take on the island idea uses hammer corals and some frogspawn to create the coral version of a bonsai tree. Lovely! 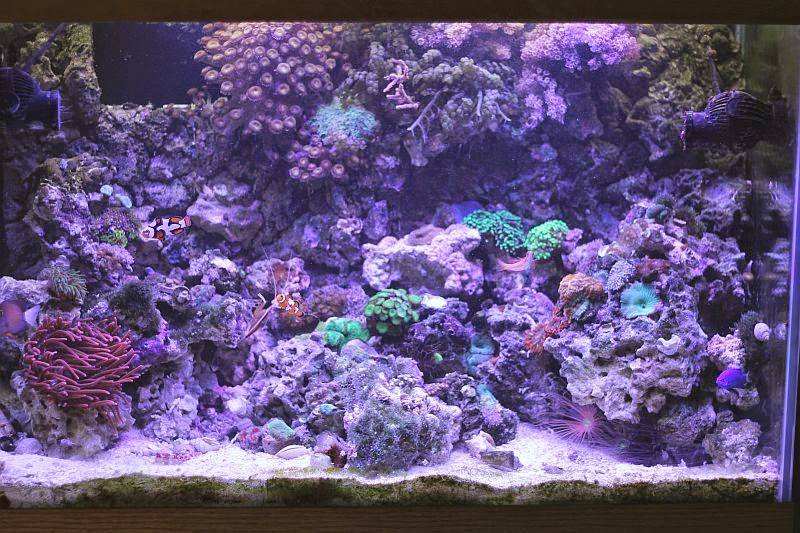 If you've ever had the pleasure of diving around a reef shelf, this will look very familiar to you. Although we don't normally see corals on the walls in the ocean, this scape gives lots of room to grow corals that need different levels of light. It also covers up the back wall of the tank if you prefer that look. While rock walls can be cool and very natural-looking, they are tough to keep clean and really make the tank look small.

This is sort of the extreme version of the low islands and shallow lagoon tanks we have seen above.  With the right coral placement in this tank, you can achieve something truly unique. It doesn't look like much now but when a few high-contrast fish are swimming above that stark white sand, it sure looks great. Add a single soft coral or waving LPS to the mix and it creates something with a very terrestrial vibe. Almost like a mountain range protruding up from a vast expanse of desert.

Recent Posts
What Causes Cloudy Aquarium Water and How to Fix It
Ep: 5 Best Biome Cycle? Ocean Direct Live Sand vs. Indo Live Rock vs. Marco Rock vs. Aquarium Sand
Ep 3: Meet the 12 Tanks - Each a Totally Different Approach to Beating the Uglies and Cycling a Tank
Tips & Tricks for Saltwater Aquarium Aquascaping!
Reef Tank Filtration and Habitat With Aquaforest AF Rock!
Live Sand & Your Reef Tank - What You NEED to Know!