10X Points will be for a limited time only.

Mystery Reward Promo will automatically be added to Preferred Reefer Carts upon addition of any item. Some brands are excluded from 10x points.

If you are not a preferred reefer sign up below.

Preferred Reefer Mystery Reward Promo will automatically be added to Preferred Reefer's Carts upon addition of any item. Some brands are excluded from 10x points.

Will Vibrant solve your algae problems? Does it really work? | BRStv Investigates


Vibrant Aquarium Cleaner is not a new product per say but it is new to Bulk Reef Supply and the availability to the hobby at large is a fairly recent occurence. The exact formula of Vibrant remains proprietary to Underwater Creations who originally developed the product to help keep their customers’ aquariums clean in between visits. 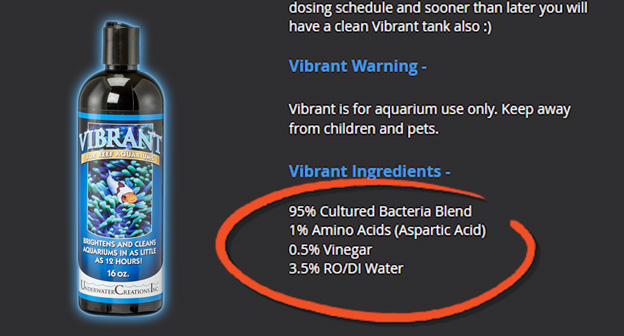 We do know it harnesses the power of various very concentrated heterotrophic bacteria. When dosed into your tank as described, Vibrant can be really effective at both reducing organic waste and virtually killing off a variety of different algae species.


Much like naturally occuring Marine Snow, the bacteria creates small biomass particles as it consumes waste and algae inside your tank. These carbon rich bio-particles are then available as food for corals and filter feeding invertebrates. They can also easily be removed with fine mechanical filtration and protein skimmers as a means of nutrient export.

Vibrant really caught our attention after seeing it annihilate a stubborn Bubble Algae problem in one of our office tanks. You might also remember we invited Jeff Jacobson, founder of Vibrant, to join us for a BRS360 live discussion which really stirred our curiosity and created some buzz amongst hobbyists.


Could it be true, does an effective additive that naturally and safely eradicates a variety of different algae species in a reef aquarium really exists? We decided to put it to the test here on BRStv Investigates to find out and the results speak for themselves. 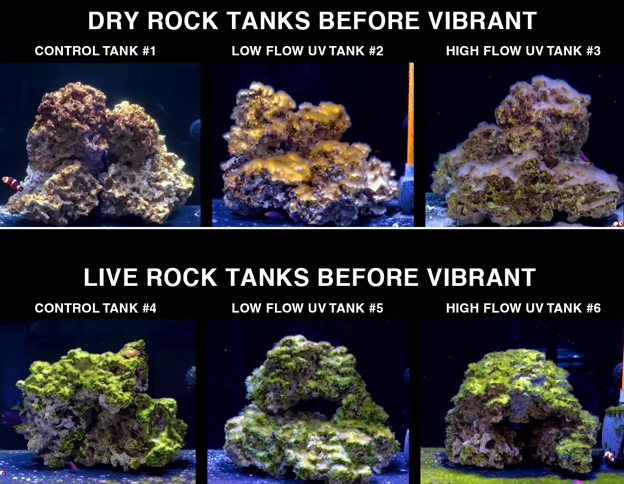 In order to test out Vibrant and understand just how effective it can be, we first needed some tanks filled with algae of different species. Luckily, we just go through farming some algae in our BRS lab.


We last saw these six test tanks at the end of our 8-week UV sterilizer test and all of them developed algae growth with varying degrees of severity during those trials.


During that experiment with UV sterilizers, three of the tanks we cycled using well established live rock which ended up with a serious case of Ulva or Sea Lettuce. The other 3 tanks were cycled using brand new dry rock and also resulted in algae problems. Two of these dry rock tanks were overgrown with Chrysophytes or “Golden Algae” and in the third dry rock tank we witnessed an unidentified dark brown algae species cover the rocks and exposed bottom panel. 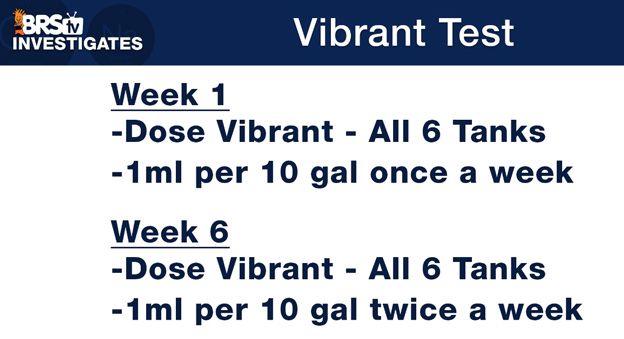 With six controlled test tanks filled with different algae species we started dosing Vibrant based on the recommended dose for dirtier tanks; 1mL per 10 gallons weekly. After six weeks, we increased the frequency of the dosage to twice weekly to more aggressively attack the stubborn algae.


We added another dimension to our experiment by keeping the UV sterilizers operating on two of the six tanks in order to find out if UV sterilization reduced the effectiveness of Vibrant. 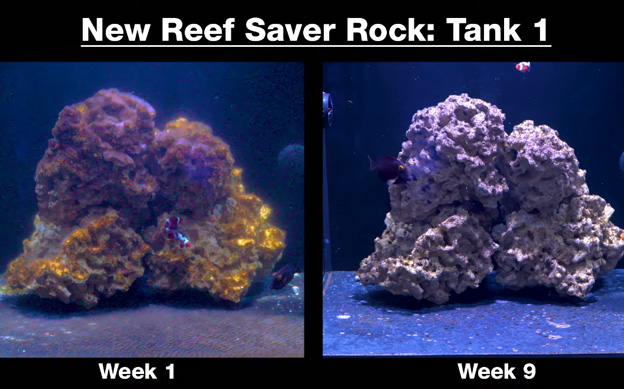 By the fourth week, Vibrant solved a majority of the algae on the rock surfaces which continued to improve through week 5, 6 and 7 and by week 8, the bottom of the tank and nearly all surfaces of the rock were completely clean and the water itself was considerably more clear without any noticeable cloudiness. 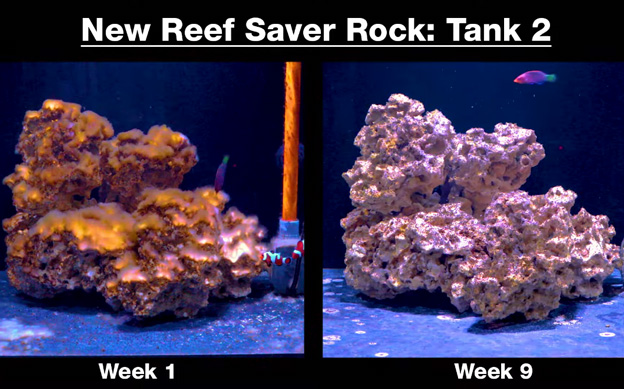 The UV sterilizer was set to operate with a flow rate intended to kill off protozoa and we kept it running 24/7 through the entire 9 week test.


After the first and second week of dosing Vibrant, the golden algae began losing its color and turning white. After week 4 it had died back to just a short fuzzy layer and continued to improve through the end of the test. By week 9 the algae was completely gone from all of the surfaces in the tank.


Note that running a UV sterilizer at a flow rate suitable to kill off free floating Protozoa did not affect the ability of Vibrant to eliminate algae. 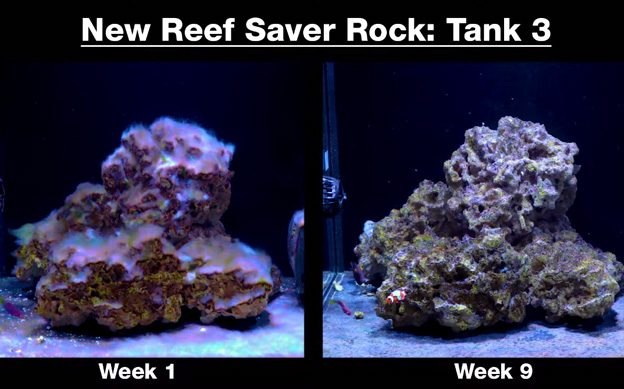 This one also had a UV sterilizer we ran a faster flow rate intended to stop the spread of algae and kill of free floating bacteria.


During weeks 1 - 4 we see the hair algae become more prominent and actually take over as the dominant algae after the Chrysophytes seemed to just disappear. Through weeks 5, 6 and 7 the hair algae finally started to thin out and show signs of dying and by week 9 it was all gone.


At this point, there really is no denying that the Vibrant worked in all three tanks, although potentially less aggressively in the tank running a UV sterilizer. 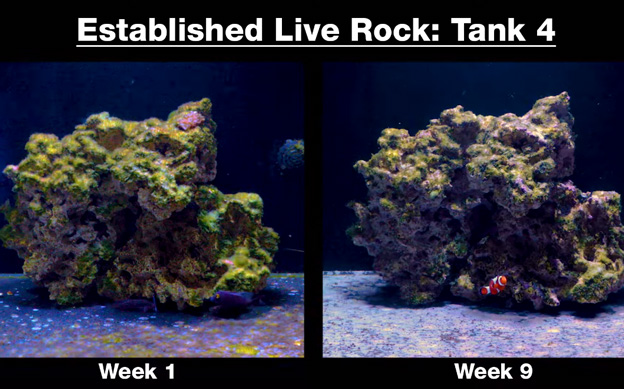 Within that first week, we immediately saw discoloration and die off of the Ulva or Sea Lettuce algae. Die off continued through week 2 - 3 and by week 4 most of the tank bottom was clear but the rock was still partially covered.


Coralline algae started growing notably in the new real estate on the rock and tank bottom that was previously covered in Ulva. After 9 weeks, there was a significant reduction overall, but the Vibrant didn’t solve the Ulva issue entirely. 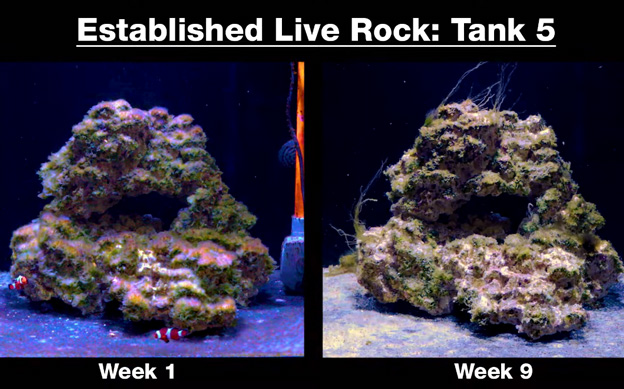 This tank had a UV sterilizer running with a slower flow rate intended to kill off protozoa and prevent the spread of fish disease.


It wasn’t until week 6 of our dosing of Vibrant that we noticed the Ulva start to change color. Some patches of Ulva on the rock actually turned darker in color and we also noticed new species of algae start to grow. In week 8 some of the new algae died back and by week 9 there was a +/- 50% total reduction in algae coverage compared to Week 1. 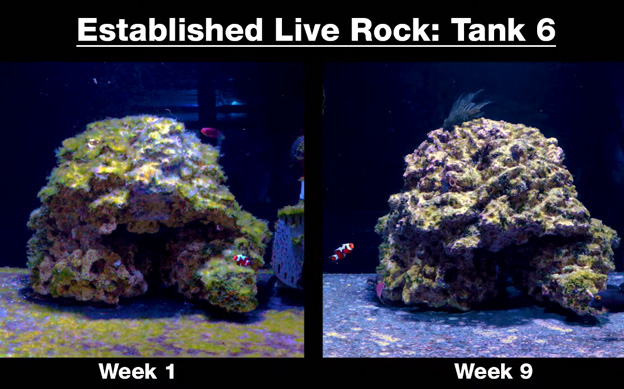 Tank #6 was probably the most afflicted with Ulva algae from the beginning and similar to tank #3, this tank had a UV sterilizer running with a flow through rate set to prevent the spread of algae and bacteria.


Like a majority of the other tanks, the existing algae started to lose color and turn translucent or white within the first two weeks. By week 7, the entire bottom of the tank was free of algae growth and the rockwork was covered in dead or dying Ulva. At the end of week 9 we achieved a +/- 80% overall reduction in algae. 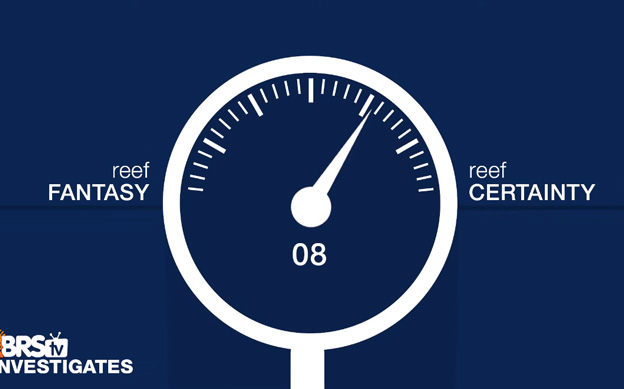 Will the bacteria in Vibrant Aquarium Cleaner really clear up algae?

This one gets an 8/10 on the Reef Certainty scale because there seems to be a clear path to beating an algae outbreak by following the recommended Vibrant dosage amounts.


The results could have likely been more effective if we put in the effort to help the process along just like you would treat your display tank at home. Manually removing the dead algae, removing detritus with heavy mechanical filtration and employ clean up crew animals such as snails and hermit crabs. 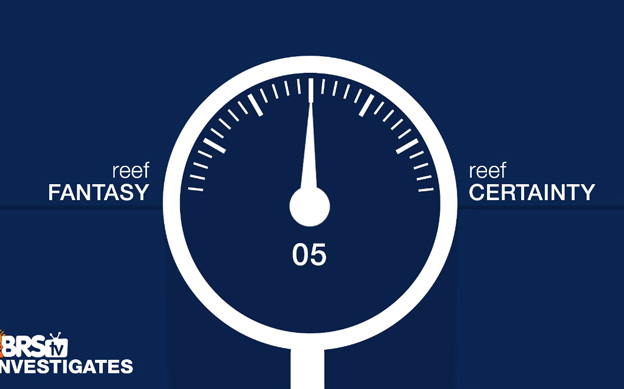 Will UV sterilization have a negative effect while dosing Vibrant?

This one gets a 5/10 on the Reef Certainty scale because on the dry rock tanks it did take a little longer to achieve similar results. Conversely, on the live rock tanks infested with Ulva algae, the tank running UV set at the high end of the flow range actually performed the best. In either case UV didn’t seem to prevent results.

It is obvious that Vibrant is having a substantial impact on the algae growing in our test tanks. It is also clear that some algae species are more difficult to clear up than others which is substantiated with the advice given by the manufacturer. More stubborn algae may require that you increase the frequency of dosing from one to two times per week. They also state that time before you see results will vary per tank and some tanks just tank longer than others.


In our case, we did not increase the dosage until later in the test and we did not make any effort to help the process along with manual removal or clean up crew animals. We suspect that if we started out with a more frequent dose and maintained the tanks weekly the results would have likely been 100% eradication or close to it.

Nothing good in a reef tank happens fast.

These words of wisdom should guide reefers of any skill level. It is silly to expect algae problems to be solved overnight, especially considering it took months for the tanks to get to the condition they were in. Attempting to do it faster may kill algae faster but also have some unintended consequences.


Curious about taking care of cyanobacteria or even the dreaded dinoflagellates? Check out Ryan’s 5 Minute Saltwater Aquarium Guide Episodes #25, #26 and #27 to learn about the clear and direct path to overcoming these common obstacles in your tank. 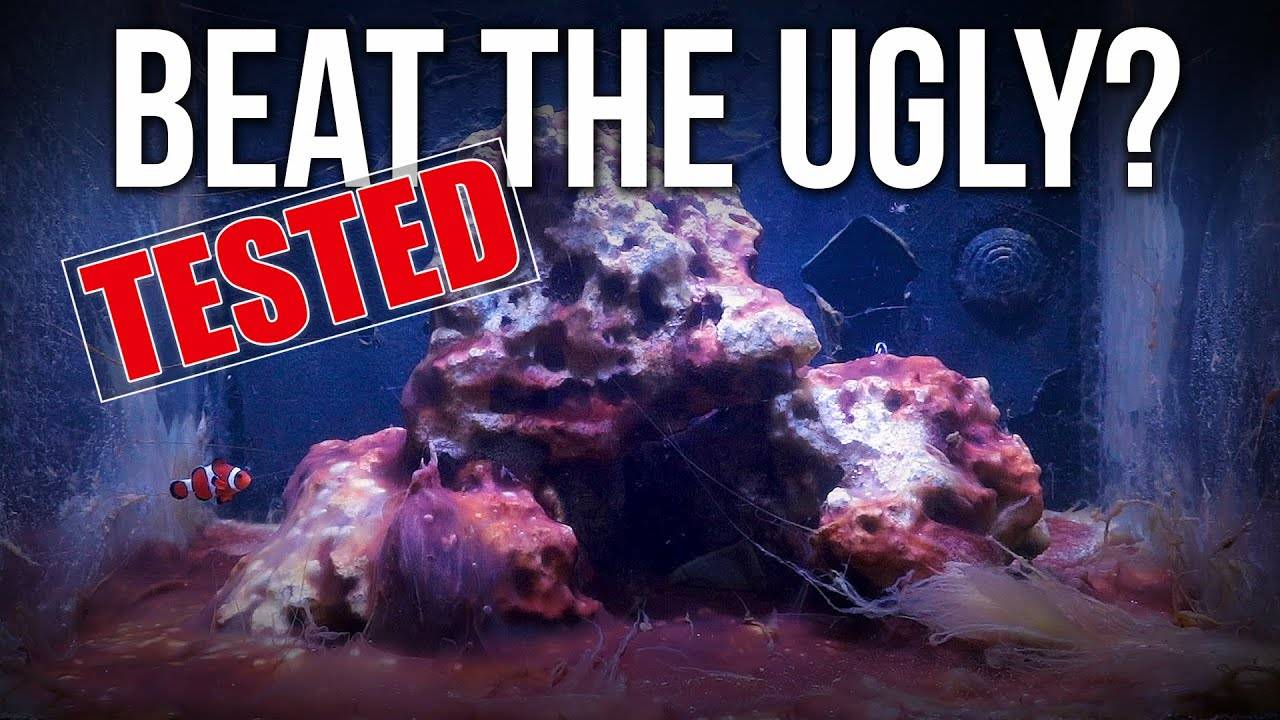 Can You Beat Algae or Skip the Ugly Brown Phase Using a UV Sterilizer in a New Saltwater Tank? 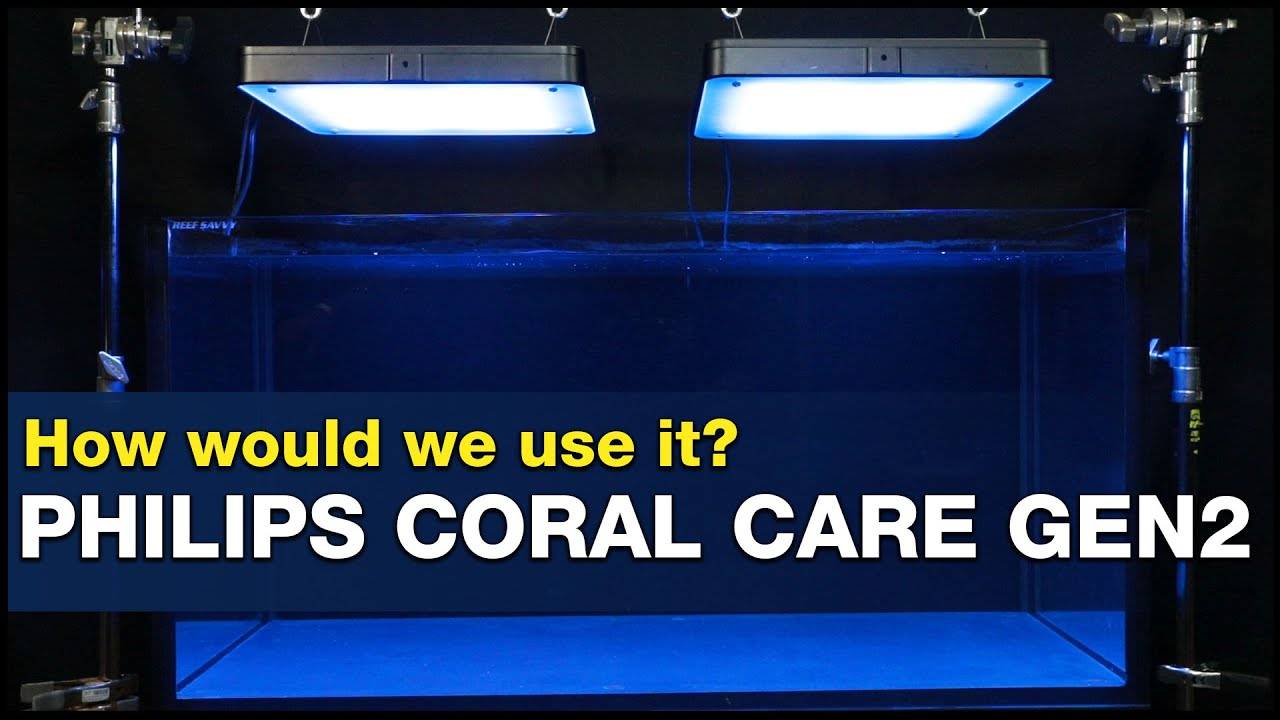 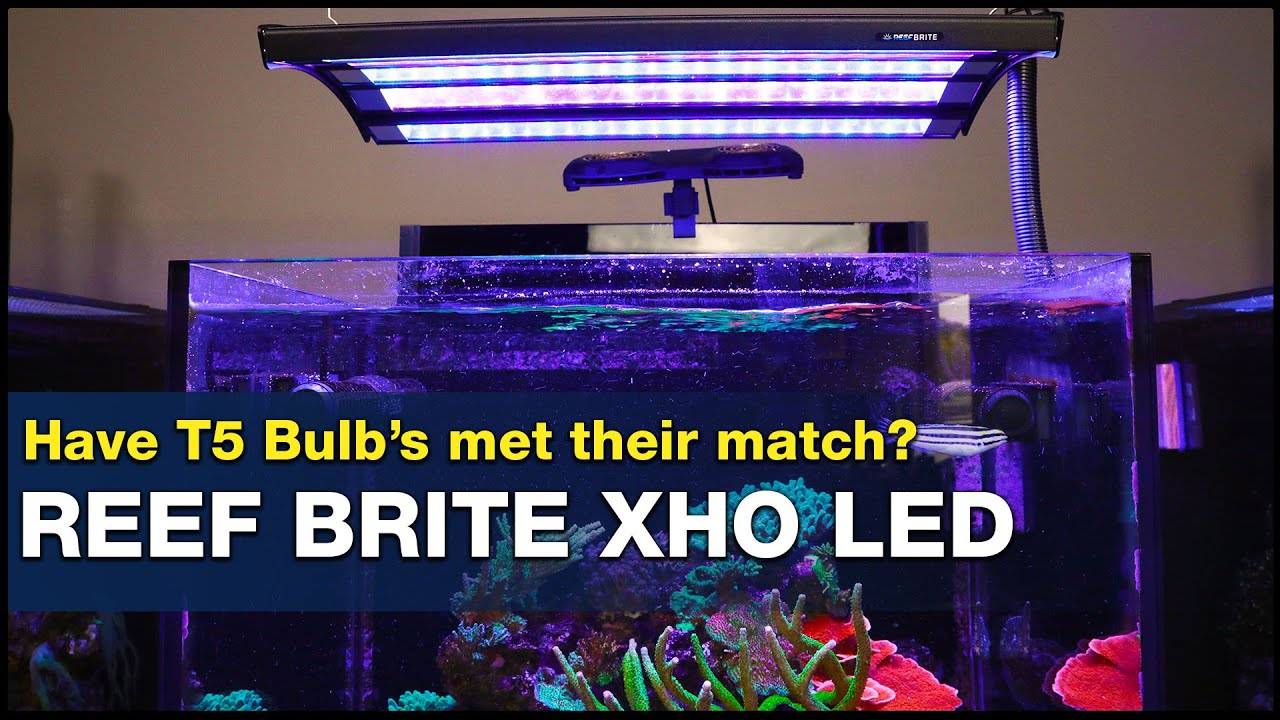 Would You Consider Reef Brite XHO LEDs over T5 bulbs? 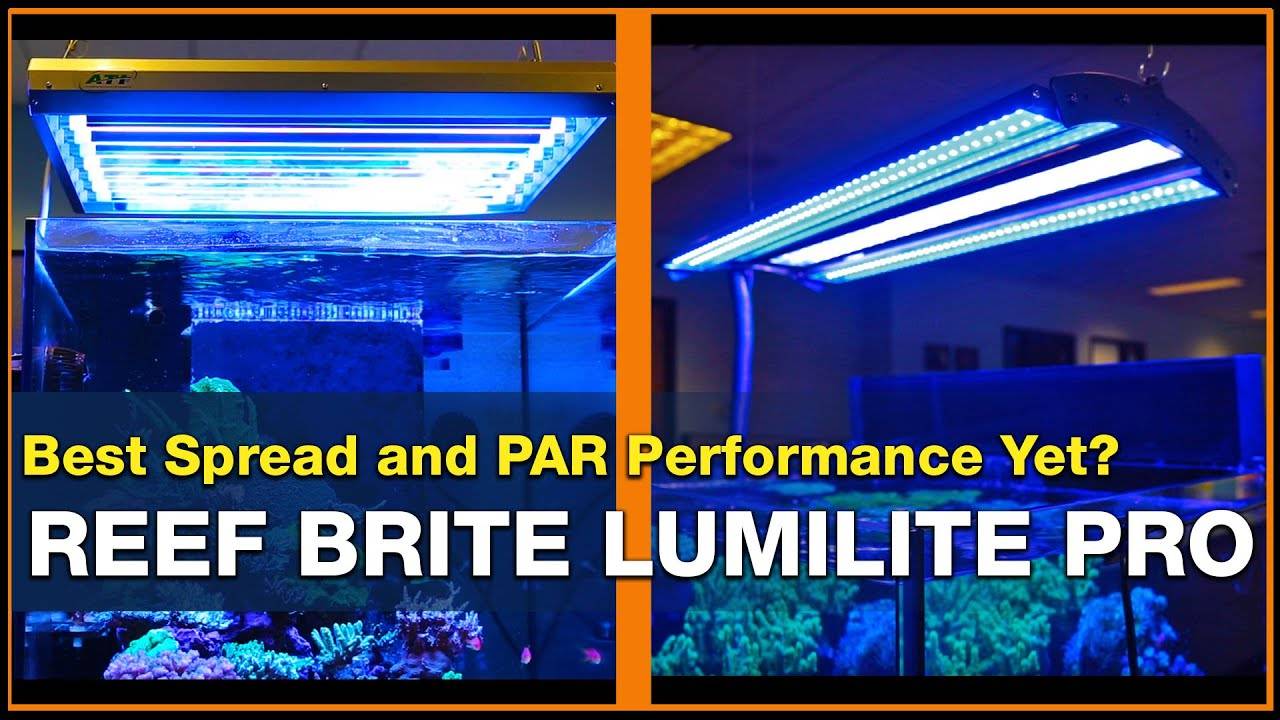 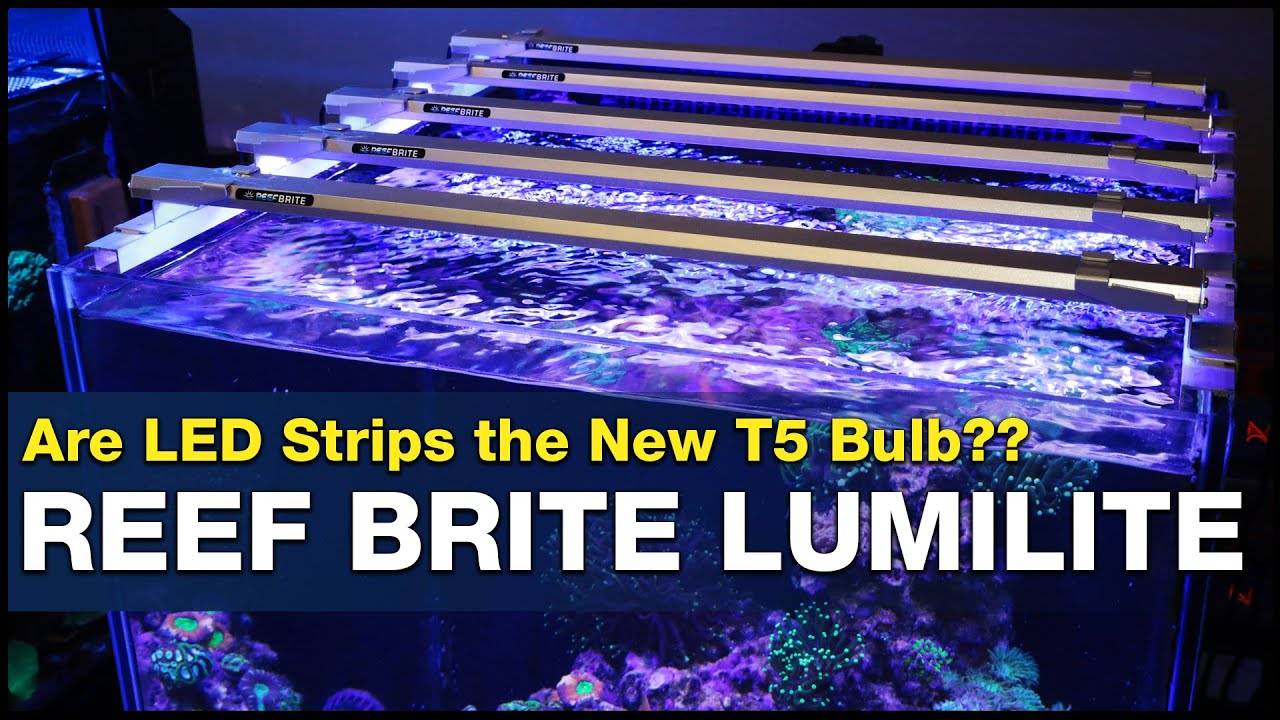 Will a handful of Reef Brite LED strips outperform T5 bulbs? Wait until you see what we found! 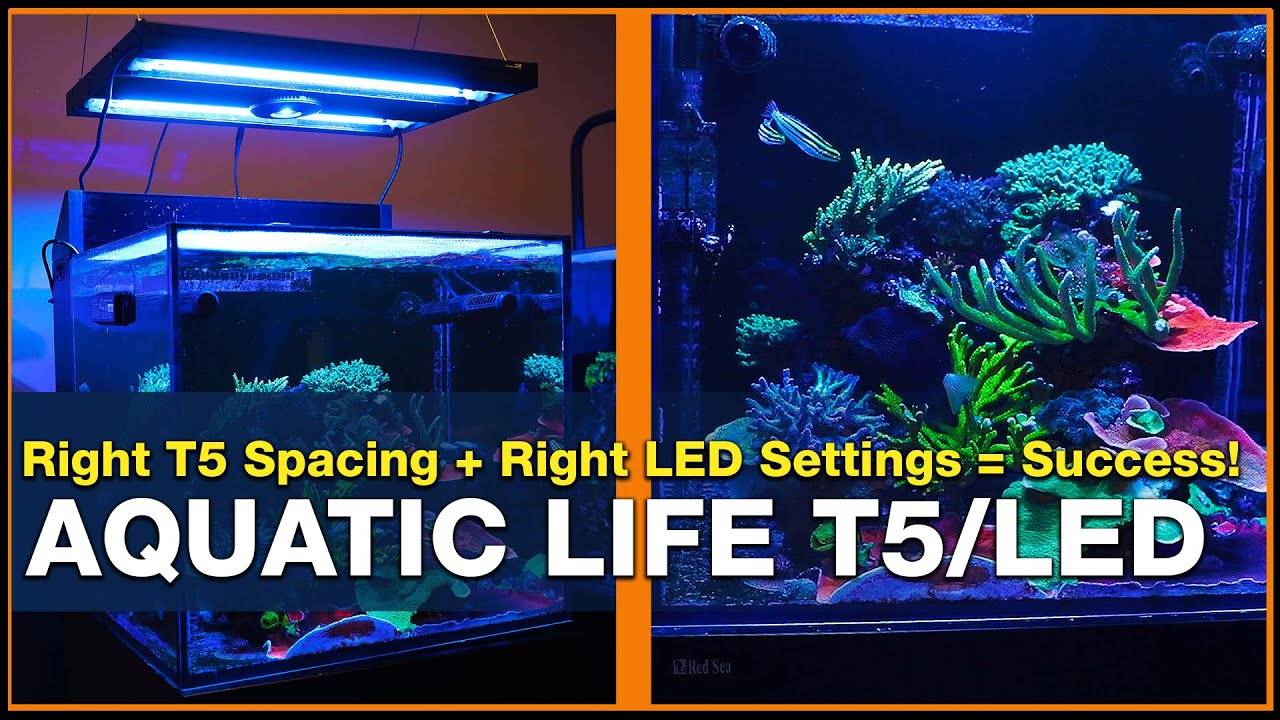