BRStv Investigates - Does the water level in my sump really affect my protein skimmer?

We suspect many of you, like many of us here at Bulk Reef Supply, have experienced some frustration with tuning an internal protein skimmer. Skimmers are very effective tools for removal of organic waste from your saltwater tank but only if they are tuned and operating properly. The reason internal protein skimmers get this reputation of being finicky is because finding that perfect balance between the submersion water depth and outlet tuning is not always straightforward.


This is the first episode of our new BRStv Investigates focus in which we want to explain protein skimmer operation in a way that is usable for hobbyists like you. We do know a variety of factors come into play that will affect a skimmers performance and it only makes sense to start by drawing some conclusions about what happens inside a protein skimmer body, specifically the things that affect the air and water mixture and foam level.

We took 6 popular protein skimmers of similar size and monitored the amount of air draw when placed in varying water depths. Manufacturers provide a specific range for water depth with 99% of the internal skimmers on the market and it certainly has some effect on performance but exactly how much and why does it matter?


This won’t be the final experiment either, the conclusions we draw today will certainly raise more questions and you can bet your bottom dollar BRStv Investigates will keep at it to get answers to some of those looming skimmer questions nobody wants to answer. 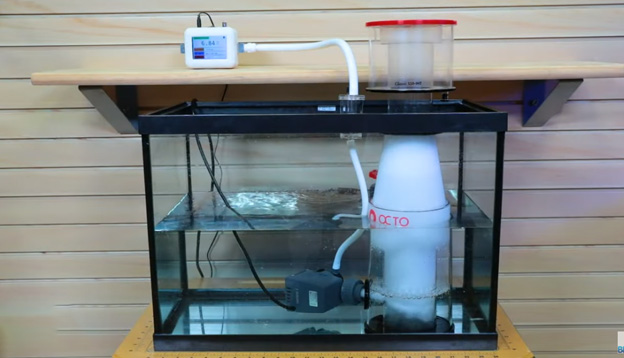 We chose the TOP 6 internal protein skimmers priced at $150 - $250 to be apart of this test. The exact tank size each one can handle varies but for the most part, they will all realistically handle a 75 gallon tank with typical stocking levels.


We used a Kelly Pneumatics Digital Air Flow Meter to measure how much air (measured in liters per hour - LPH) the skimmer pump is pulling at the manufacturer's recommended sweet spot which is right in the middle of the operating range. This will give us a baseline for each of the different skimmers so we can gauge exactly how much air that skimmer should be pulling under typical circumstances.


We then dropped the water to be 1” below the operating range and took more air measurements and measured again at 1” above the recommended water depth.


We compared our baseline measurements with the numbers we gathered at the varying water depths to see exactly how much a skimmer air draw is affected by water depth changes and then find out if the manufacturer's recommended range is precise, more of a suggestion or just obsolete.

After comparing the air draw measurements the skimmer’s performance really did not change all that much between even the lowest and highest depth we tested. That is likely because of the small operating range of only 1” given by the manufacturer. Based on these numbers you could potentially operate the 150INT with as much as a 3” range without seeing any sort of drop in performance.

Again Reef Octopus only recommends a range of less than 1” for operating the 110INT but in this case we definitely recommend sticking to that. We measured a significant drop in air flow both above and below the recommended minimum and maximum depths.

The Somatic skimmer came with the widest operating range of 6” - 9” and we took our baseline reading at 7.5” of depth. It is no surprise the largest pump gave us the largest air draw numbers and was also one of the most significantly affected by water level changes. Not really a fair comparison to the others considering the recommended operating range is 3” which put our total test range at 5” from highest to lowest tested water depth.

A few things to note on this one, it does have the biggest operating range of the skimmers we tested and is the only skimmer to include an air control valve. Likely these two go hand in hand because that extra tuning with the air valve will give you the ability to accommodate your particular tank conditions much more precisely.

Our only DC powered skimmer that was tested and the pump is located inside the skimmer body. With a 2.5” operating range it was the second largest range we encountered and it is not surprising to see the performance start to drop when you drift outside this operating range.

The eShopps Axium gave us the lowest air draw numbers and gives us a 2” operating range. The air draw did not drop dramatically when we adjusted water level in either direction and we actually saw an increase when it was submerged deep in 10” of water.


This one likely has some wiggle room in terms of operating depth but it is important to note that at that higher operating water level it will be difficult to tune the skimmer down and stop it from overflowing.

This one is using the same pump as the Reef Octopus 110INT Classic but this time the air numbers painted a different picture. It seems as though pump placement inside the skimmer body or a combination of some other design feature resulted in less drastic changes in air draw numbers as we raised and lowered the water level.


Regardless, there was little to no effect in air draw from the lowest and highest depth we tested which means this skimmer could safely be used in anywhere from 6” - 9” of water without negative effect, simply tune the outlet to accommodate the water level. 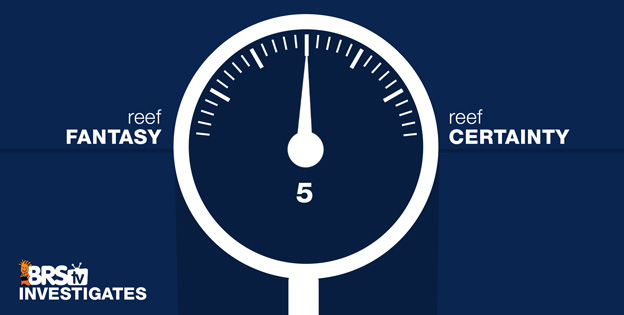 Does the water level in my sump really affect my protein skimmer?

This one gets a 5 out of 10 on our Reef Fantasy scale because during our tests we found that some skimmers were dramatically affected by water level changes while others were not.

There are more questions yet to be answered here and the take away today is that without testing your particular skimmer, it is best to not stray from the manufacturer recommended operating depth to ensure you are getting optimal performance. 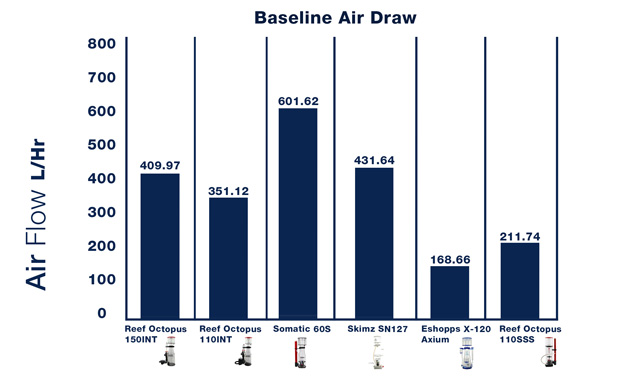 Looking at the baseline numbers there is definitely a difference across the various skimmer pumps where some had more than 2-1/2 to 3 times the air draw than others, possibly hinting to those particular pumps being optimized or chosen specifically based on the skimmer body size.


Something else that sticks out is we saw a pretty significant difference in air draw from two different skimmers using the exact same pump. This raises even more questions and likely has to do with the differences in design. The pump placement, venturi/volute fitting and skimmer body size were different between the two, most notable the pump was outside of the body on the Reef Octopus 150 INT Classic and placed inside the body on the Reef Octopus 150SSS. All we can say for sure is one or all of these design elements plays a role in the amount of air those skimmers are pulling. 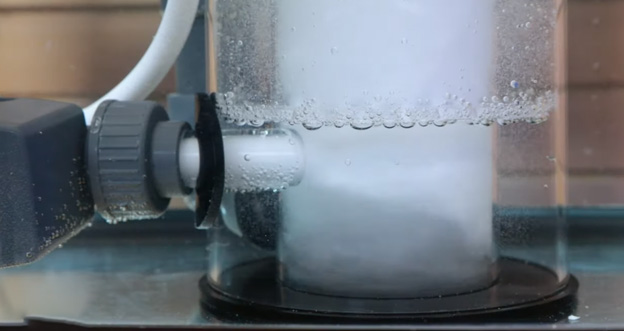 Pump wattage is also rising to the surface as a defining factor in performance. With the Reef Octopus 150INT using an 18 watt Aquatrance 2000 pump, we saw little to no impact on air draw when placed at different water depths within a 3” range. The Reef Octopus 110INT with an Aquatrance 1000 pump at only 9 watts, however, was one of the most significantly affected by operating depth. Adding to that, in both cases the recommended water depth range was quite small, less than 1” from the lowest to highest recommended depth.


In that same thought process about wattage, the Somatic 60 pump was the largest we tested at 23 watts but was also the most affected by changing water depth. The major difference being that Somatic allows for a 3” variance in operating range right out of the box.


All of this simply raises more questions which has us amped to continue our experiments and ideally pull some valuable advice for installing and operating internal protein skimmers. 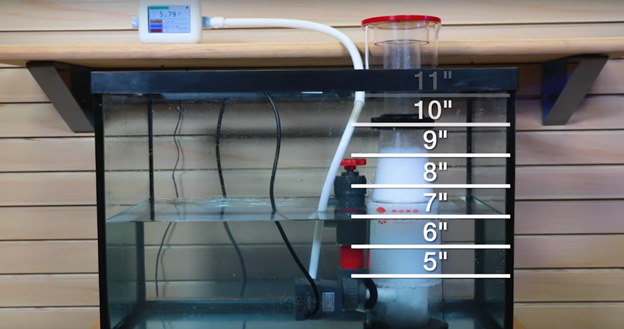 For the next round of testing we are going to scale up and choose the 6 most popular protein skimmers from the next price bracket of $250 to $400. On that note, we’re going to switch up the experiment next time and rather than rely on the manufacturer’s recommended operating depth, we will simply take measurements at 1” intervals from 5 - 11 inches of water depth so you can make a more informed decision of where to install those particular skimmers in your sump based on the air draw numbers, regardless of the manufacturer recommendations. Stay tuned!