In our last episode, we discussed establishing a nitrogen cycle in your new tank and if you missed Episode #15 - Cycling Part 1, we highly recommend you check it out before continuing with this second part of the process.


During phase two of the cycle, sometimes referred to as a “4 month cycle” we go way beyond the ammonia and nitrogen cycle and really get to the heart of setting yourself up for success. 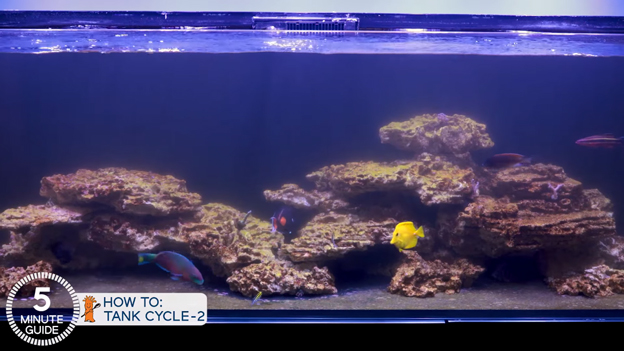 You will often hear hobbyists refer to something called the “ugly brown phase”. This is a phase in which the rock turns brown and various algae take hold. You can also experience bacterial type infestations in the way of red or brown slime that covers the surfaces inside your tank. This is a very common occurrence for new aquariums so don’t worry if it happens to you, we can help you get through it.


Inside of a new aquarium, there is a ton of brand new real estate that microscopic organisms are fighting tooth and nail to dominate. When something gets out of hand, it is only then visible to the human eye. Phase 2 of the cycle process is all about supporting the good organisms and their efforts to fight the bad ones.


Important Note: This is one of the many aspects of your tank in which an ounce of prevention is worth a pound of cure. Listen to this advice and listen closely, taking the time to avoid these pests now is far easier than dealing with them later after they have grown out of hand. 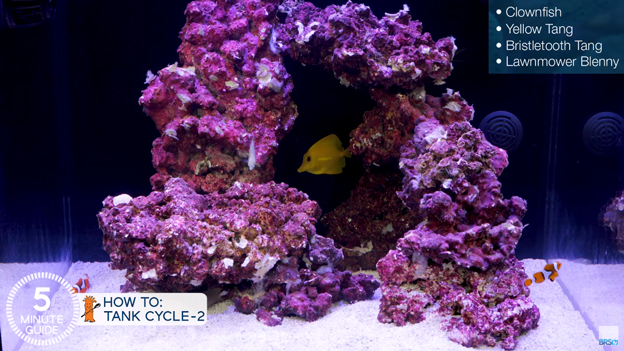 We talked about utilitarian fish in a previous episode and now is the time to make use of them. In each of our tanks here we are adding a Yellow Tang, small Bristletooth Tang such as a Kole or Tomini Tang and a Lawn Mower Blenny.


Important Note: Tangs grow large and you need to get small tangs. These Tangs will eventually outgrow your 40 gallon tank so be prepared. In 18 months time you either need to trade them in for another batch of small tangs or upgrade your tank to something bigger! Of course, we prefer the latter. 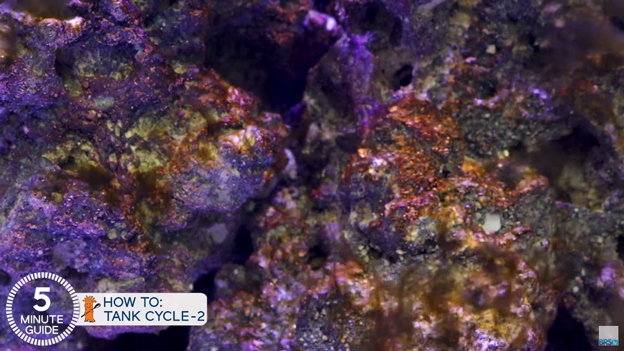 These fish eat algae for a living and you need to establish them for 1- 2 months BEFORE turning on your tank’s lights. This will cut your chances of running into an algae problem by up to 80% through the first year of your tank. The fish will eat the young algae before it can ever become a problem.


In addition to algae, parasites and various other pests can make their way into your tank via coral frags. This is a good time to also consider adding something that eats those pests like a Six Line or Coris Wrasse. These are the protectors of your coral and will consume many of the most common pests. 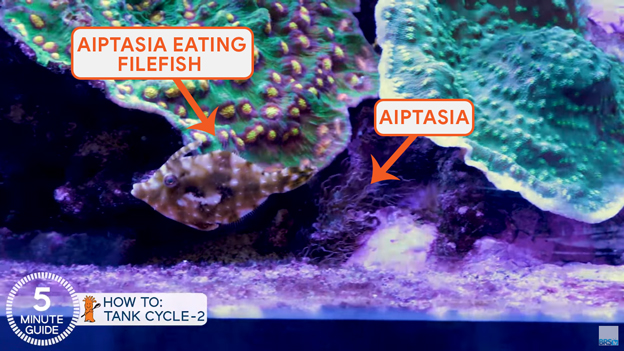 Another preventative utilitarian fish you might consider is an Aiptasia Eating Filefish which goes after another common pest in the tank, Aiptasia Anemones. We didn’t add them to our tanks here because they can develop a taste for coral polyps but if you want an almost foolproof army of fish working for you, these are a smart addition.

Before turning on your lights, consider adding something like Vibrant or Brightwell Aquatics Microbacter Clean which contain highly valuable heterotrophic bacteria. These bacteria rely on food sources to survive such as organic sludge and detritus, new algae growth and even other harmful bacterias. 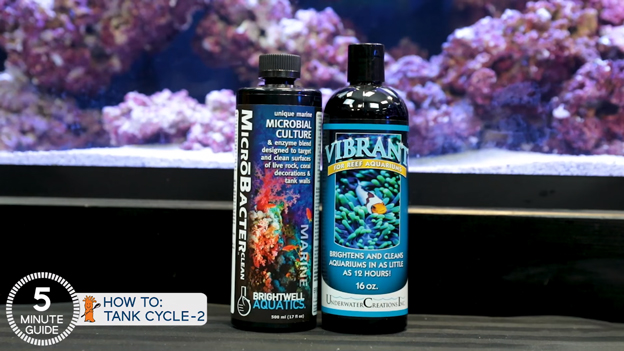 Both Vibrant and Microbacter Clean are products used by reefers to clean up the tank after they run into issues but they can also be effectively used as a preventative measure up front.


Dosing bacteria like this is far from required, but is highly recommended if you want multiple levels of protection against algae and pests. Many reefers report back such high levels of success that it almost feels like cheating! 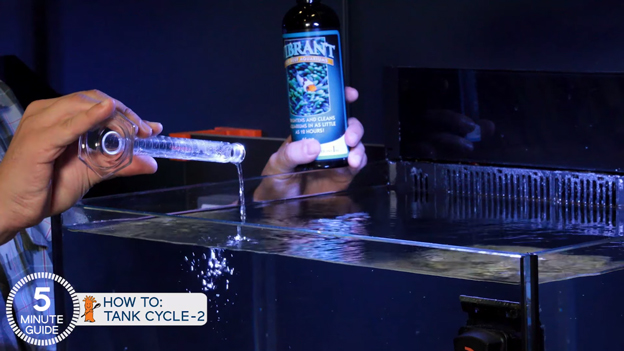 In our 40 gallons tanks, we are going to use Vibrant and will start adding it sometime after the initial cycle and at least 2-3 weeks before turning on the lights. These bacteria will not replicate in seawater so it is important to repeat the dosage every two weeks until you are confidently passed that ugly brown phase.

There is a theme here, an aggressive approach to avoiding algae and pests all together. That’s because algae and pest outbreaks in the first year are one of the biggest challenges reefers run into. It’s kind of tragic that the hardest part of owning a reef tank is the first year because it gets exponentially easier past that point. 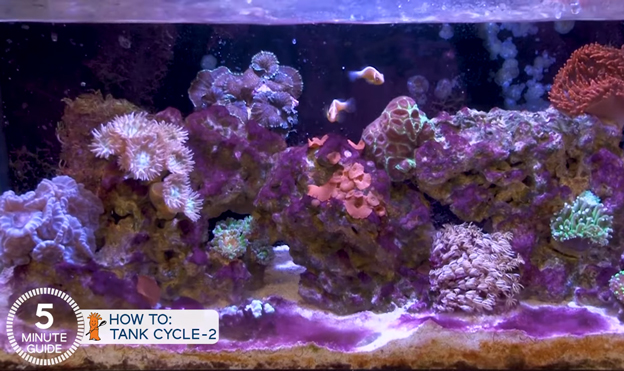 This is something we already mentioned, twice in fact, because it should be done in unison with the other two steps. Keep your lights OFF. Sit back and enjoy your new fish and let the microscopic warfare happen for the first four months without light.


That seems like a long time but it is well worth it, high output reef tank lighting is not required until you add corals and will only perpetuate algae or cyanobacteria growth during this time. Patience is going to be a virtue while building and maintaining your reef tank, embrace it now or forever be in regret.

At the end of four months, flip the switch and turn the lights on. If you do run into an algae bloom or pest outbreak of any kind, simply let it run its course before adding corals.


Is best to think of the ugly phase as just part of the journey, you can often cause more issues trying to solve it rather than just waiting it out. Employ these preventive measures we talked about and you are putting yourself ahead of the curve.


Past this point, it is a good time to add a clean up crew which are small animals that help clean up the tank. This will be a handful of Hermit Crabs, Trochus and Nassarius Snails and maybe even an Emerald Crab, Sand Sifting Starfish or Sea Urchin for larger tanks. 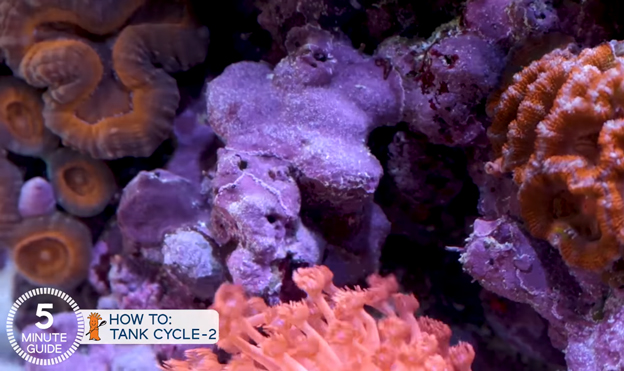 This is also a great time to introduce Coralline Algae by scraping off some Coralline from a friends tank or a small rubble rock purchased from your local fish store. Simple scrape off some living Coralline anywhere into your tank water.

So now that you have all of this life inside your tank, it is time to learn how to feed them. There is definitely a right way and a wrong way to go about feeding your tank. One path leads to an awesome tank with healthy fish while the other is certain doom.