LED manufacturers do not make clear recommendations for how many LED fixtures you need and how to space them over your tank. The reason is because when it comes to reef tank lighting, every tank is different and the recommendations they make are based on one very specific generic type of tank.

We are going to split this up into two tank types that will cover 90% of reefers to help all of you understand exactly what you need to provide the best LED light coverage over your reef. We are also not going to specifically cover every single LED light available but that is ok because most all popular LED lights can be grouped in categories by wattage.

This is the majority and also includes a true mixed reef tank that really only contains a few SPS corals. These types of tanks are just a lot easier to light and really what most of the general recommendations manufactures give are based on. 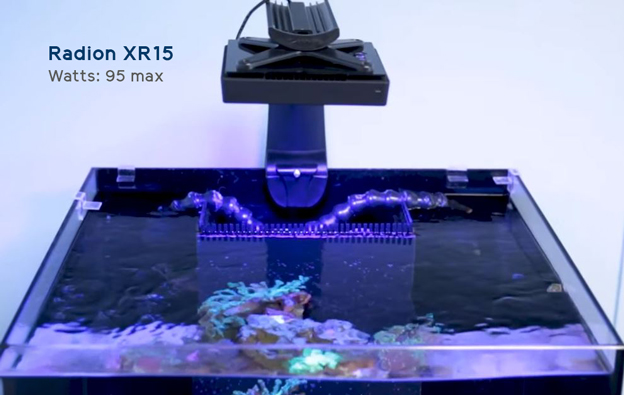 Most of the popular LED modules can actually just be broken up into wattage groupings. For your average 2 foot tall tanks, the 90 watt models seem to be the sweet spot where coverage, intensity, reasonable mounting heights and cost seem to intersect.

For these LPS, Soft coral and mixed reef tanks there really is no need to go any higher than a 90 watt range LED light. These make up a majority of the LED lights reefers are purchasing from us: Kessil A360X, EcoTech Marine Radion XR15 with Diffuser and Aqua Illumination Hydra TwentySix.

All of these lights utilize a maximum of around 90 watts of electricity and over this tank type a single fixture is sufficient for a 2 foot by 2 foot area. That means you want a single module on a 60 gallon cube, two modules on a 4 foot 120 gallon tank and three of them on a 6 foot 180 gallon tank.

If you have a tank that is less deep front to back like a typical 90 gallon tank which only measures 18 inches deep, we still recommend the use of one fixture for every 24” of length, left to right, to achieve the coverage you need.

None of this information is groundbreaking for LPS dominant and mixed reef tanks because they are simply not that susceptible to shadowing issues or hot-spots. In fact, over powering these medium to low light demanding tanks with LED light is the most common problem.

SPS dominant reef tanks, specifically Acropora species, are significantly different and present their own set of issues to overcome with lighting.

Shadowing becomes a major issue with branching acropora. As the coral grows, it casts a shadow over its neighbors, then starts to shadow its own base and internal branches. The shadowing causes undesirable growth patterns, brown out of internal tissue, clearly dead bases and all kinds of things you don’t want to see in a SPS dominant tank.

PAR hot spots become more prevalent in Acro or SPS tanks just because they require more intense light. The reliable goal for average PAR value is 250 throughout as much of the tank as possible when keeping SPS corals. We saw excellent results in the iconic WWC 900 gallon display tank which measured PAR values from 200-300 throughout a majority of the tank.

If PAR distribution averaging 250 can be achieved, lighting intensity will never be your problem when keeping SPS dominant reef tanks.

The challenge here is if we approach this the same way with one light for every 24 inches of tank length except using higher wattage fixtures, hot spots become an issue. Directly under the light you will be getting PAR values in the 500-600 range in order to achieve the 250 PAR values you need throughout the remainder of the aquarium.

The shadows are also an issue because at this kind of light spacing, you are not able to achieve that blanket of light, coming in from all angles that will overcome the shadowing effect.

The third challenge for SPS gurus is spectrum hotspots or insufficient color blending. This is when corals get hit with peaks and valleys of various color spectrums and the effects are really unknown. Commonly referred to as the “Disco ball effect”.

We do know that SPS corals seem to be very sensitive to different light spectrums which is evident by changing colors and health responses which tells us the spectrum is important to coral biology.

The first solution would be to supplement with T5 lights to fill in the gaps. Stick with the one LED light for every 24 inches of tank length and simply add T5 lamps to fill in the gaps and blanket the tank. This is a very proven and reliable approach that delivers results.

We realize many of you are looking to overcome these challenges with LEDs alone which will require a bit different approach. 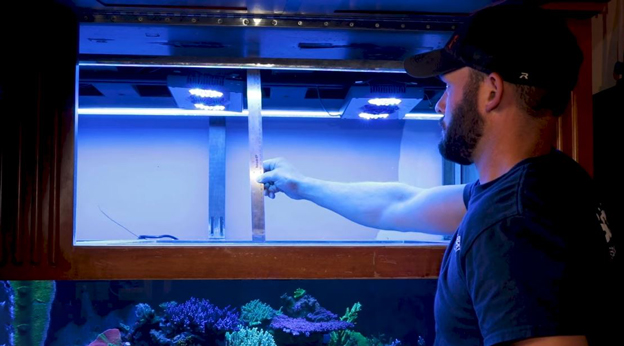 You can consider using the higher power LED options and raising them up to a mounting height of 12-18 inches or more from the water’s surface like what we saw at WWC and what we did over the BRS160 aquarium. The downside to this is that you start to get considerable light spill when you raise the mounting height up this high.

The second option would be go back to the moderately powered 90 watt range LED lights, mount them closer together and closer to the water’s surface. The intersecting sources of light creates the even coverage and sufficient intensity you need to support SPS corals. 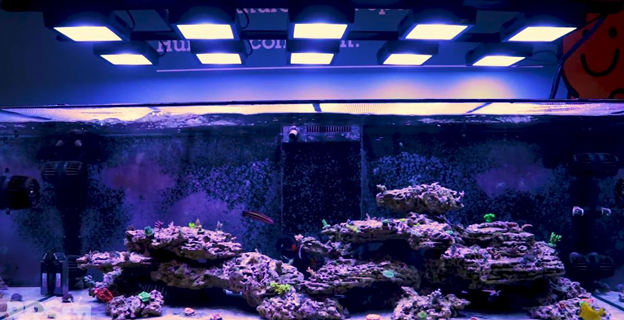 If you have an aquarium that is wider than 24”, you can consider two rows of LED lights with them spaced at one fixture every 14” which is what we did over our Red Sea Reefer XXL located in the BRS office lobby.

Related to that, a grid of 6 or 8 Aqua Illumination Prime LEDs over a standard 48” x 24” x 24” 120 gallon aquarium performed really well compared to four moderate 90 watt fixtures every 12 inches. 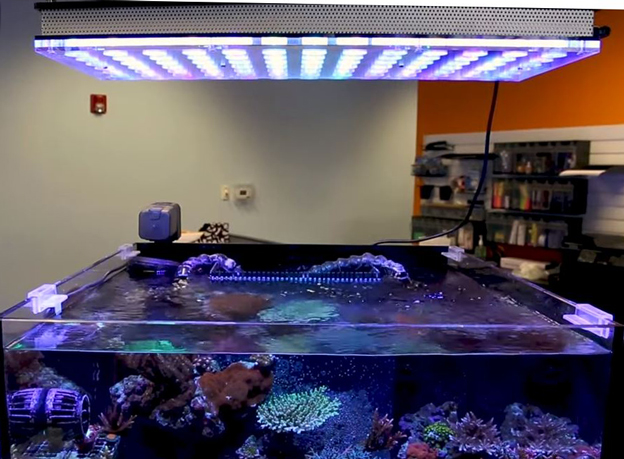 The third option are LED options which come in the grid form factor out of the box. The Orphek Atlantik is certainly the most common which spaces out the diodes over a large grid which eliminates the shadowing and hot spots altogether and is designed to be mounted higher up so spectrum blending is also not a problem.

In this case, on a standard 24 inch front to back tank, a single 210 watt Orphek Atlantik will effectively cover a 48” LPS or mixed reef tank and up to 36” for SPS dominant tanks. That means only two fixtures to cover a 6 foot long 180 gallon SPS tank. The unit itself is more expensive but when you consider the extended coverage, the cost is comparable to other options. 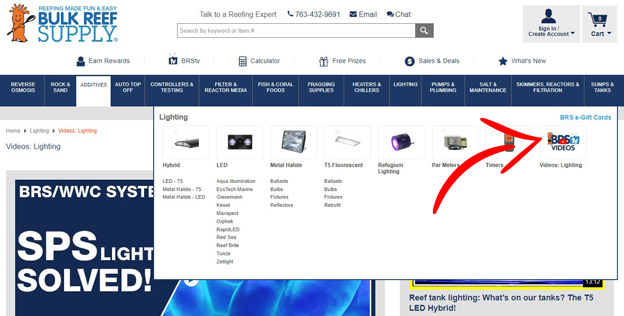 We put together a YouTube Lighting playlist with all of the BRStv Investigates episodes about individual LED lights. The proof is in the data and these are the episodes in which we collected that data that proved these recommendations will perform each and every time.