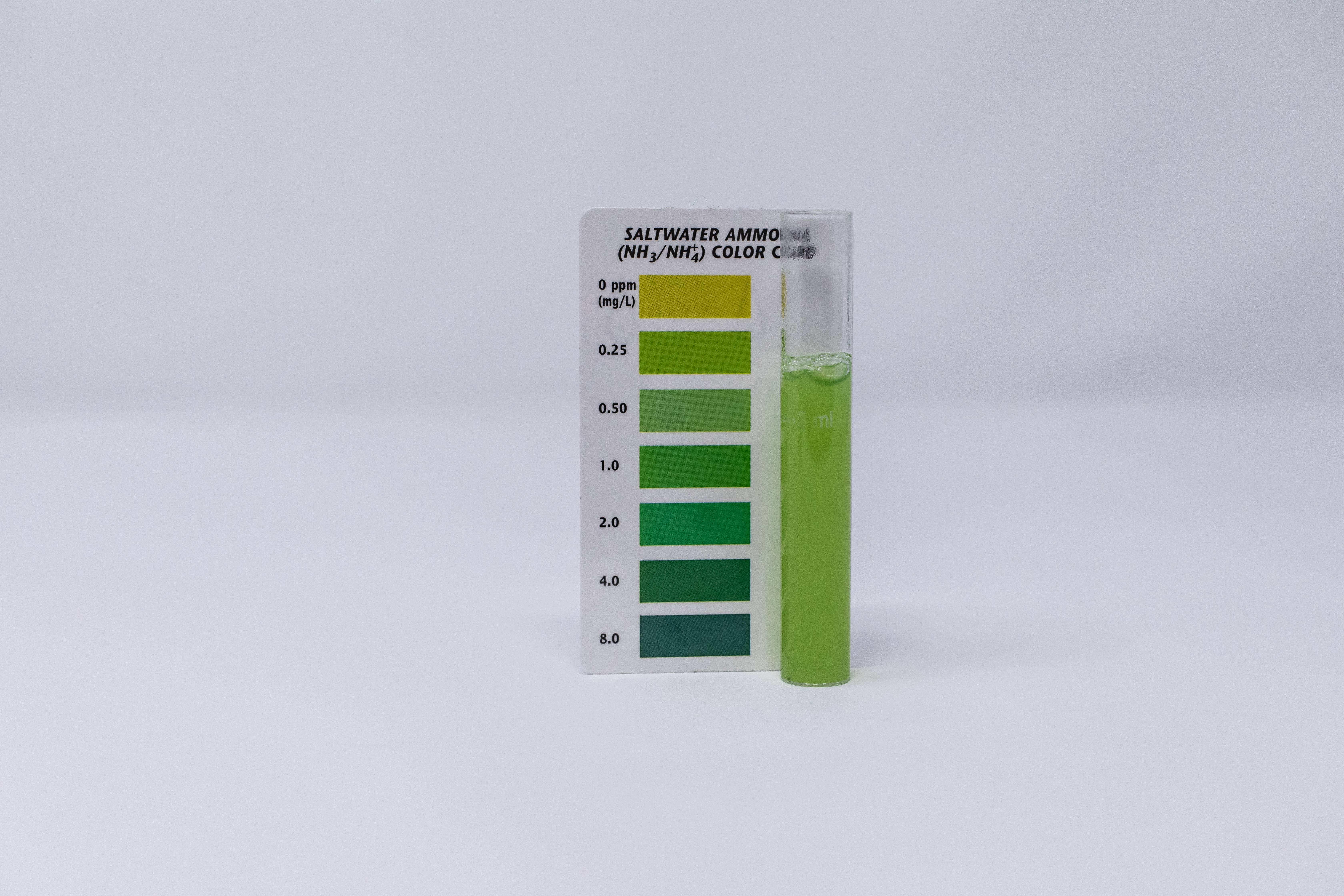 Ammonia testing is something we all do when cycling a new aquarium. It’s also a good idea to monitor the water quality when adding new livestock to an established tank. And of course, when something doesn’t look right in the aquarium, one of the first thing we grab is the ammonia test kit.

It seems everyone has their favorite ammonia kit. Even so, online discussions reveal no one has ever come to a unanimous conclusion as to which ammonia test kit is “the best.” 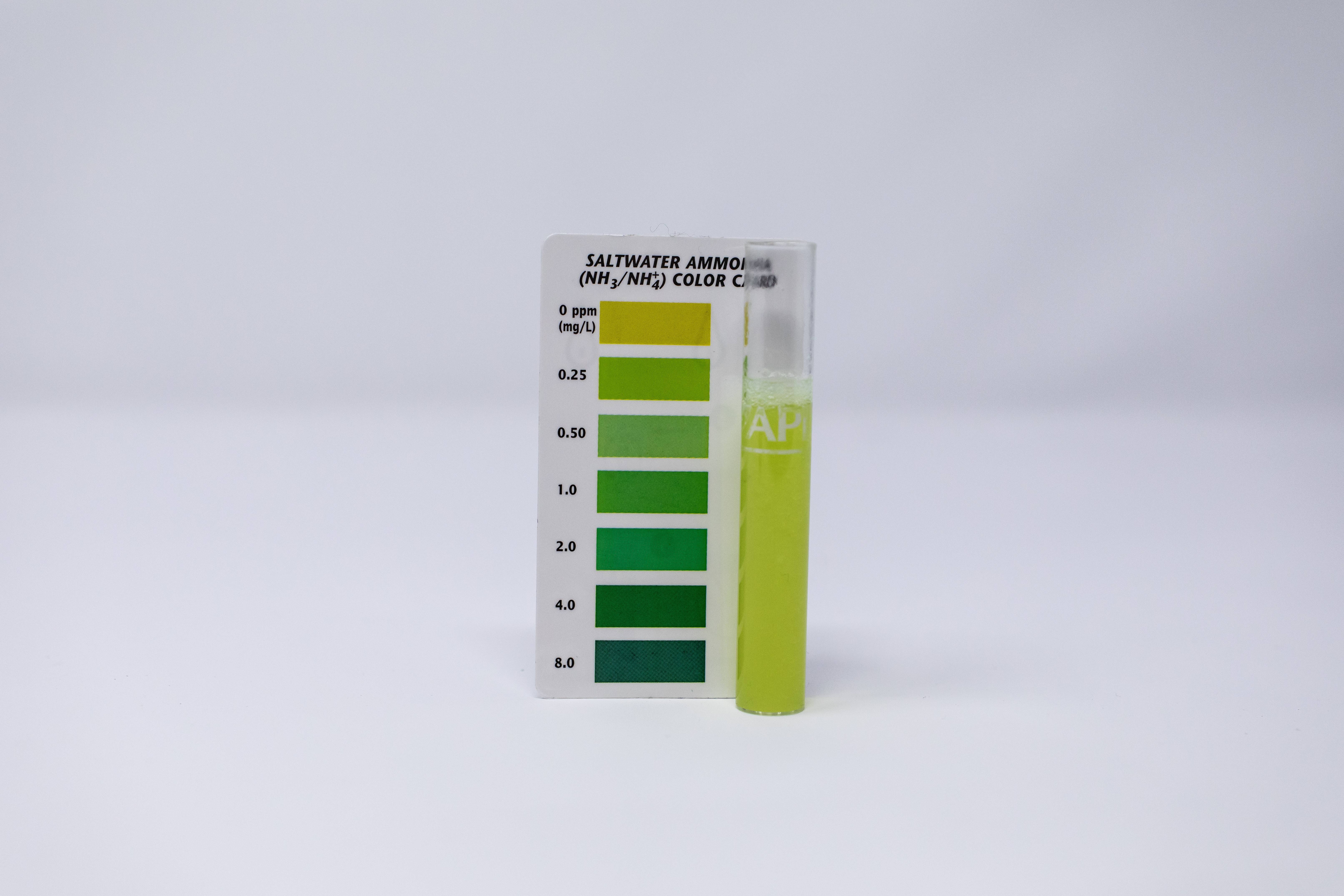 The difficulty with evaluating test kits that rely on matching colors with our eyes is that we all don’t see colors the same way. Then there’s subconscious bias toward one kit over another, especially when it cost more, cost less or looks super technical.

For this ammonia test kit evaluation, we used a “blind” three-person test panel. The water samples contained known lab-prepared ammonia levels. But none of the people using the kits had any idea what the levels were. They simply performed the tests and wrote down the results.

Originally ammonia test kits used the Nessler method. It’s based on a chemical called mercuric iodide, which reacts with ammonia to form a yellowish color. The intensity of the yellow color is proportional to the ammonia level.

To eliminate aquarist exposure to mercury and the environmental impact of pouring the test solution down the drain, most aquarium kit manufacturers switched to the Salicylate method. This test method involves a series of reactions that form a green color in proportion to the ammonia level. The advantage of the Salicylate method is it’s better for detecting low levels of ammonia. Both test methods report ammonia as Total Ammonia, NH3 plus NH4+.

Taking a different approach, Seachem uses a proprietary ammonia-sensing disc that turns blue in proportion to the ammonia level. Once the test kit has formed a color, it is matched to a color chart with corresponding ammonia levels. The color chart must closely match the colors produced by the test kit. Ideally the inks used for the ammonia chart were matched to test result colors under proper lighting. The industry standard for printing, packaging and graphic arts is viewing under 5,000K lighting. This lighting standard provides the “truest” color rendition when comparing subtle color differences. Color charts are printed using inks that closely match what we see with the test kit. Improper lighting at home can make comparing the colors difficult. Aquarium and ambient room lighting can affect how we see colors on paper and through test vials.

For this test, we used a 5,000K light box so everyone on the panel saw the ammonia test results under the same ideal lighting conditions. 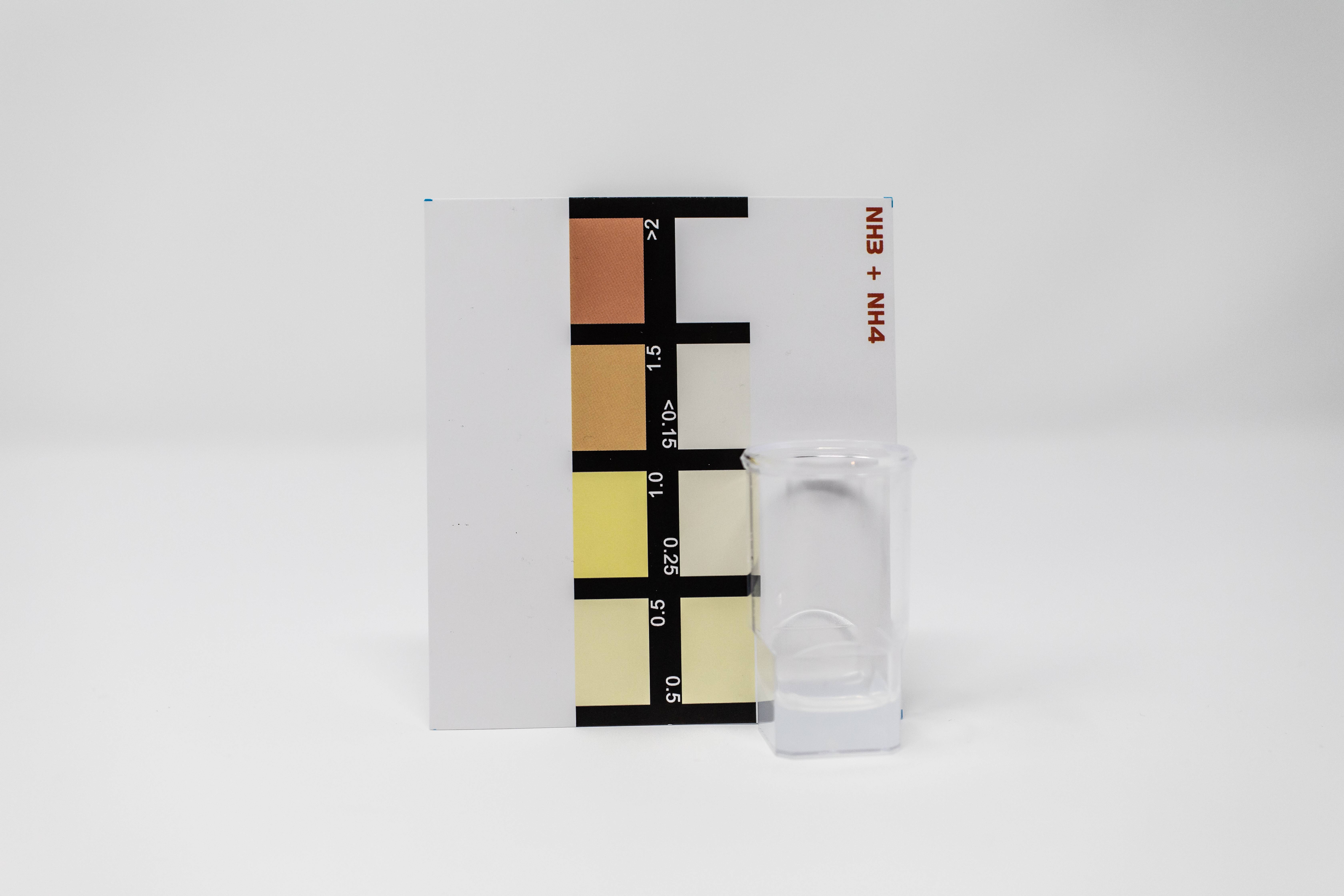 Salifert: This shot shows the kit with 0.25 ppm ammonia.

How the test was performed

For the comparison, we selected ammonia test kits from Elos, Salifert, API and Seachem.

Lab-prepared saltwater solutions containing 0, 0.18 ppm and 0.25 ppm ammonia were made for the tests. Each of the three panelists were given six water samples consisting of two 0 ppm, two 0.15 ppm and two 0.25 ppm ammonia. Each water sample was labeled with a letter but the ammonia level was kept secret. Each panelist performed the tests in private. There was no collaboration to determine the results. The tests were performed using the manufacturer’s instructions. Test kit readings were made inside the light box. 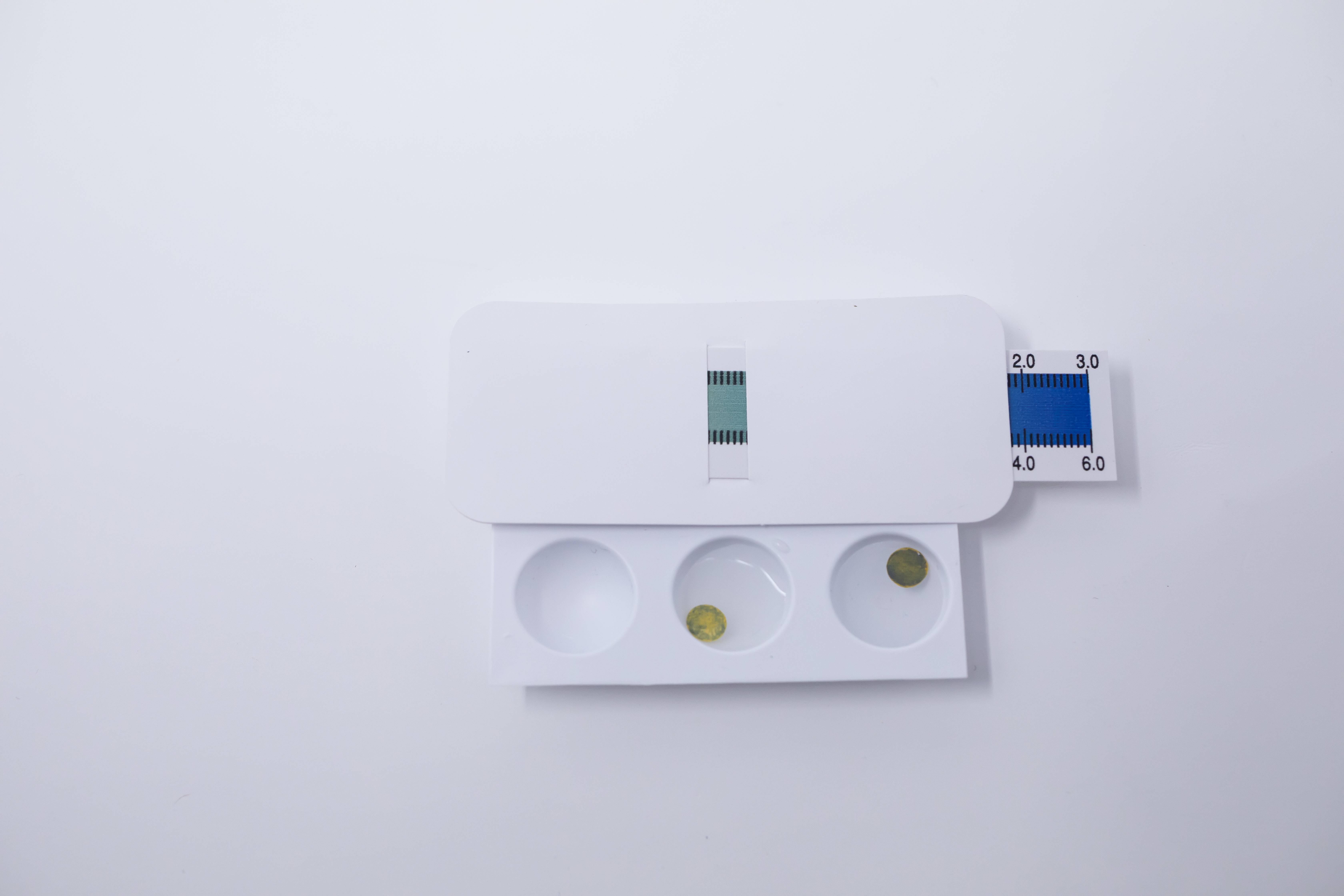 Seachem: This shows the center disc at 0.25 ppm ammonia. The right disc is in the 1.0 ppm checker solution included in the kit.

The first thing we noticed was the Elos test reagents and instructions did not match. Liquid reagent A was labeled properly. The second reagent (B), is a powder but was labeled as “C”. The third reagent (liquid), was labeled as “B.” The pictogram and instructions made it clear that the order of dosing was liquid A, a scoop of powder, then liquid C (mislabeled B), so we were able to perform the test. The other concern was that the second liquid reagent was dark brown in color. Presuming the Elos ammonia test is based on the Salicylate method, the reagent appeared to be expired or contaminated since this method uses clear reagents. The reagents didn’t have expiration dates but the box had a cryptic “SET.2017” ink-stamped on the side. Every test performed with the Elos kit turned a dark brown color and could not be matched to the color chart. We found an online user review with a similar observation.

The Salifert ammonia test kit was difficult to read. No one could tell the difference between 0, 0.18 or 0.25 ppm. Every test result looked like 0 ppm. The expiration date of the kit was “11-2019.” Knowing that the Nessler method has a reputation for being “not so good” for low ammonia levels, a 2.0 ppm ammonia standard was run. The Salifert kit performed flawlessly at this level, indicating the kit was working.

The API ammonia test kit uses the Salicylate method. The test reagents have a high pH which causes some calcium carbonate precipitation in the test tube. That’s why the Salicylate test often looks a little hazy when used in saltwater with a high calcium level. The suspended precipitate makes the colors opaque, making it hard to form a transparent yellow color when the ammonia level is zero. All the panelists thought the 0 ppm ammonia solutions looked like “maybe a trace ammonia.” No one thought the 0 ppm results looked like the zero level on the card. The panel thought the 0.18 ppm solution was less than 0.25. The 0.25 ppm water sample seemed to be in the sweet spot for color matching. Everyone felt the level was a solid match at 0.25 ppm.

The Seachem ammonia test kit stands apart from the traditional test kits. The little wells provide a nice white background to view the disc. We ran the test in Total Ammonia mode, waiting 30 minutes for the disc to develop the color. The ammonia-sensing disc turns from yellow to blue, proportional to the total ammonia level. The discs remained yellow (0 ppm) in the zero-ammonia water samples. In the 0.18 and 0.25 ppm water samples the panel noted the discs were “spotted” and “splotchy.” Part of the discs remained yellow but also had “positive” blue spots. The color chart appears to be made up of tiny color dots, which make it hard to match if you’re too close to the color card. It seems to work best by making the color match at arm’s length, so the dots are less noticeable. Everyone found the disc color hard to match but were able to determine that water samples with 0.18 and 0.25 ppm ammonia were around 0.2 ppm by focusing on the grayish color on the discs. We later checked the kit by running a Total Ammonia test using the 1-ppm ammonia reference supplied with the test kit. The disc turned darker blue, although a bit splotchy with yellow showing through.

This test was designed to eliminate the most common factors that influence how we make determinations with colorimetric test kits. The idea was to remove some bias, so the observations would be easier, giving each test kit a chance to perform at its best.

We can’t weigh-in on the Elos ammonia test kit because it was probably expired. It was hard to detect low levels of ammonia with the Salifert (Nessler) kit, but they could probably be deciphered with a colorimeter. At higher levels the kit worked perfectly. The API ammonia test kit was difficult to read at zero to 0.18 ppm ammonia due to the calcium haze in the test tube. However, 0.25 ppm ammonia was spot on. The API reagents have an expiration date on each bottle, making it easy to know if the kit is still good. Seachem’s ammonia test kit is really interesting but people seem to dislike handling the tiny discs and the sometimes-spotty coloration.

“Eye balling” test results with colorimetric kits has always been a weakness, even with “high end” brands like Hach. That’s why labs, industry and water treatment facilities don't use colorimeters for critical testing.

That’s not to say aquarium test kits are inferior. There are a lot of universities and fish farms that use aquarium test kits because they’re quick, easy and accurate enough to get an idea of water quality. Our advice is to make sure the test kit is not expired. If there’s no expiration date, provide the manufacturer with the lot code and request the use-by date. If there isn’t even a lot code, no one including the manufacturer knows how old the test kit is!

The other important factor is color matching under natural daylight conditions. That’s how the color card was created and it’s the only accurate way to compare the test result to the color card.

We invite you to explore other articles in our Testing Test Kits series!  :-)