We have long thought that yellow water caused by tannins in the aquarium water will reduce the amount of light and, therefore, PAR available in your tank. The dirtier the water, the more yellow it gets and the more PAR it will block.

In 2014 the BRStv team ran a simple test with a Radion LED laying on top of a 5-gallon bucket of water. We tested the PAR inside the bucket using both crystal clear water and dirty yellow water. We recorded an astonishing 28% decrease in PAR caused by the yellow water running the Radion at 100% output.

At the time, this was somewhat "enlightening" information but as you dig a little deeper, there really isn't a ton of other scientific or even anecdotal evidence out there to support this theory.  The theory being yellow water can block up to 28% or more of your available PAR. While it's easy to believe some amount of PAR will be blocked, 28% seems pretty serious and why wouldn't more reef tank owners encounter problems?  Even an industry-leading lighting expert, Dana Riddle, found that yellow water had a negligible effect on PAR measurements in his own experiments.

This time, Randy ran a series of related experiments using the water from three different reef tanks here at the office. We measured PAR directly in the tank at a 12" depth right of the bat. Ran a batch of carbon to clear up the water in each tank, then measured and recorded the PAR again.

In addition to the real tank test, Randy pulled some of that yellow water into a 4 reservoir dosing container to run a side-by-side test against a control containing freshly mixed saltwater. We recorded the PAR before and after carbon at a depth of 24" from the water's surface. 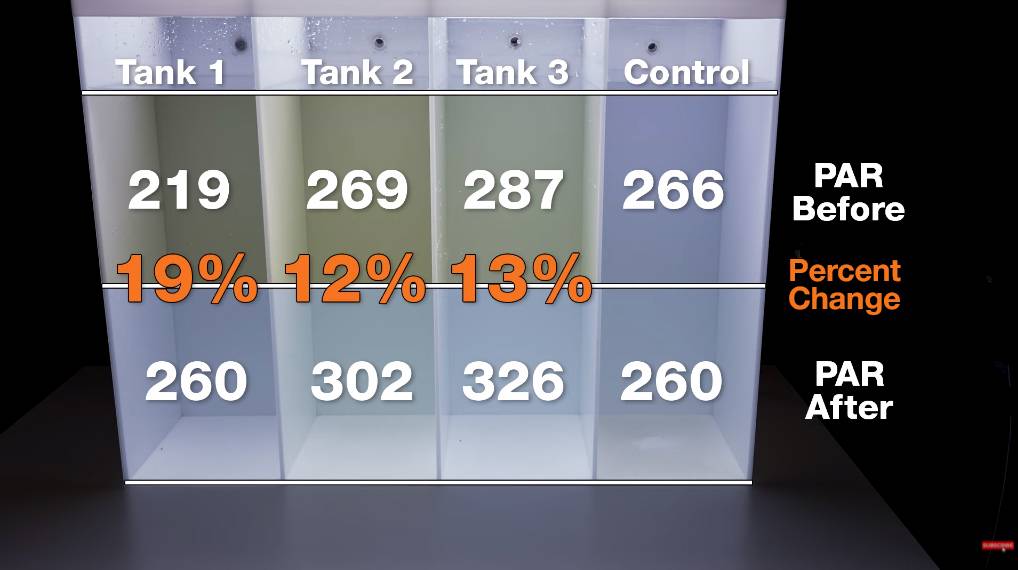 We measured PAR at the bottom of each dosing reservoir, roughly 24" from the water's surface.  In all cases, we experienced an average PAR change of about 15% across the board. Relative to the 28% drop we measured in 2014, we start to really question just how much PAR the yellow water really blocks. Is it enough to stress the corals and tank inhabitants?

When we tested the PAR inside each of the three different reef tanks, the PAR sensor was just 12" from the water's surface which we feel would provide a more accurate representation of the average PAR throughout the entire tank. The change in PAR recorded here was even less substantial which really suggests this Yellow Water theory was bunk, at least not as bad as we originally thought.

Yes, in both tests we measured PAR changes between our variable and control light penetration tests. That said, it's probably not going to make a huge difference in your reef tank, here is why.

In a real-world reef tank, we generally are keeping anywhere from 100-300 average PAR throughout the tank.  That would result in a maximum drop of 15-30 PAR using or average change of 15% we measured in the dosing reservoirs. Not exactly something to cause too much concern.

Looking at our second test, we only saw a maximum of only a 4% change in the reef tanks themselves which substantiates the claim even more. While yellow water does block PAR, it's most likely not going to be any amount we should be concerned with. Most certainly not enough to cause severe stress in the tank.

Why The Different Results?

Randy made some good points in evaluating why we recorded different results this time and why we saw such a drastic difference between the dosing reservoir test and the real reef tank test. Our initial test in 2014 was done using a Radion at 100% output which gave us over 1600 PAR in the yellow water which is not a realistic amount of PAR we would use in a reef tank.  It's just not scalable when you consider we are using only 100-300 PAR in our tanks.