Is two better than one? Is a recirculating protein skimmer extra cost worth it? | BRStv Investigates


We compared performance by measuring the air draw and how this air draw is affected by water depth. We then examined which of the two designs is easier to adjust and better maintains performance. Before getting into the results, lets first discuss the things that separate these two very popular protein skimmer designs and pros and cons of each. 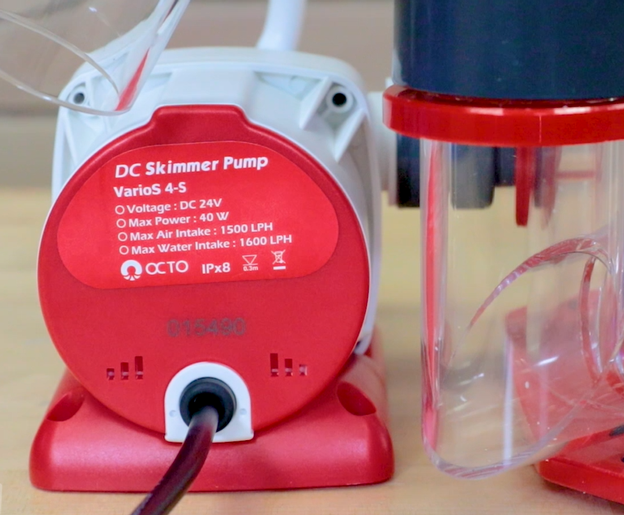 Single pump skimmers, such as the Reef Octopus Regal 200INT, utilize a single pump to do all of the heavy lifting in terms of operation. That single pump, feeds both water and air simultaneously into the skimmer body, meaning that it’s in charge of producing the bubble reaction (air draw) as well as the contact time (how much water flows through that skimmer per hour). By design, these skimmers require submersion into the sump and cannot be used externally.


This single pump design is beneficial in that these skimmers usually will have a smaller form factor which saves precious space inside your sump. It is becoming more and more common for manufacturers to place the skimmer pump inside the skimmer body itself further reducing that demand for space. Along with that, the single pump and smaller form factor means less materials and pump costs compared to recirculating skimmers which is ultimately passed onto you, the end user, with a more affordable skimmer. 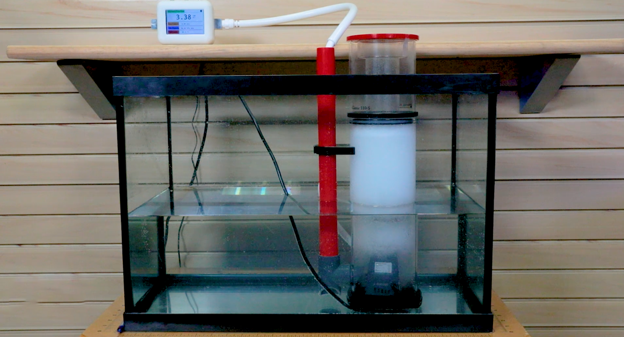 You can be faced with some challenges, however, when relying on a single pump to handle both the foam production and contact time. You have far less control over making individual adjustments to only the air or only the water flow since the two are directly tied together when a single pump is doing both.


Furthermore, the sumps water level will also affect both the air and water flow meaning a change to any one of the three variables ( air, water flow or skimmer depth) will ultimately impact the other elements of performance at the same time. This creates difficulty when attempting to dial in the protein skimmer and often requires constant adjustments because on inconsistent performance.

Recirculating skimmers, such as the Reef Octopus Regal 200EXT, split the workload among two different pumps. The skimmer feed pump sets inside your sump and is solely in charge of contact time and how much tank water is processed per hour because it feeds the skimmer with raw water. The faster this pumps water in and out of the skimmer body the less contact time we get with the bubbles inside but it also means we process more water per hour.


The 2nd pump is the recirculating pump that does just that, it recirculates the water inside the skimmer body via a closed loop while drawing in air and creating the foam. Most of the recirculating skimmer designs on the market can be used either internally or externally giving hobbyists a bit more flexibility for installation.

The challenges these skimmers bring is an added cost because in most cases you need to purchase the feed pump separately, as well as an added cost for the additional manufacturing required to make it recirculating. The extra pump and additional materials also inherently creates a larger footprint taking up more space inside your sump.


Another challenge is the limited options. When shopping for skimmers you will see a far wider selection of internal single-pump skimmers on the market which is likely because of the limited knowledge that currently exists regarding why a hobbyist would want a recirculating skimmer in the first place. Recirculating skimmers are also commonly misunderstood as being only suitable for use outside of the sump when in reality, they can be used both internally or externally with the same effectiveness. 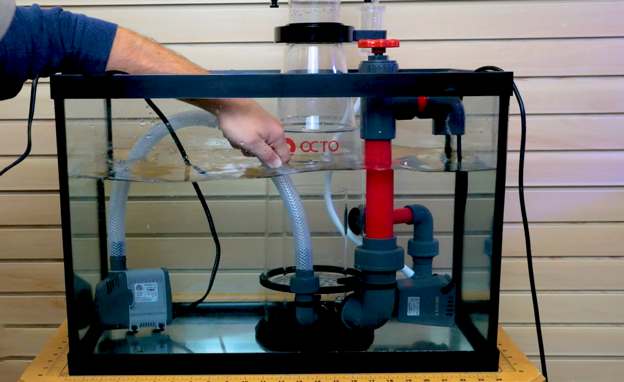 
The recirculating design will also give you the ability to adjust or control the air draw without affecting the flow through rate so a little bit more air or a little less can be adjusted separately. With a DC recirculation pump, air adjustment can be as simple as changing the pump speed and with an AC recirculation pump, you can add a control valve on the end of the venturi airline to control how much air is sucked into the pump. 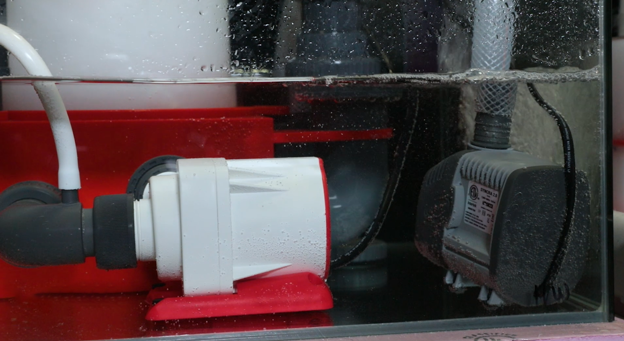 In both cases the pumps recirculate the air and water mixture inside the body which has no effect on contact time or how much tank water the skimmer processes per hour because of the separate feed pump.


Independent pumps mean independent controls and the performance variables are not affected by one another.

In some ways, we can think of a single pump skimmers as being similar to a carbureted internal combustion engine that is simpler in design but easier to flood and less tunable for optimal performance. A recirculating design is similar to a fuel-injected system that can be optimized or tuned to nearly any available amount of fuel…or in our case, fish waste, uneaten food and organics.

To fulfill our desires for finding the best type of protein skimmer for the application, we tested two different protein skimmers manufactured by Reef Octopus that utilize the same pump. 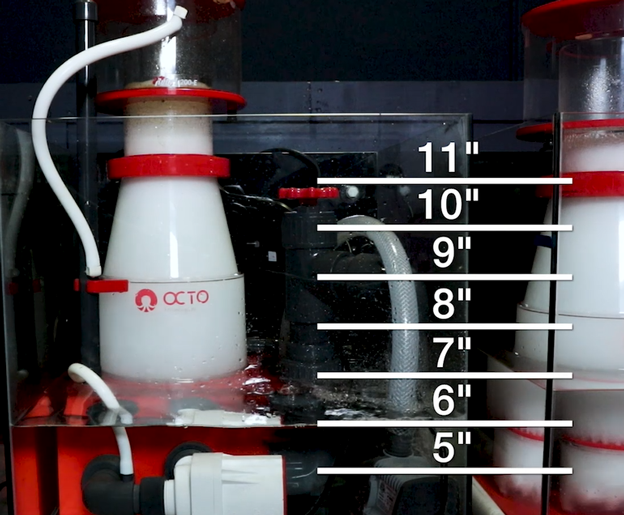 We are approaching the testing in two phases with our first phase focused on measuring air draw. We monitored the air being drawn into each skimmer using the same digital airflow meter used in the previous skimmer tests. Data was collected at varying water depths from 5” - 11” and also at each of the 5 different pump speeds of the VarioS-4 DC pump.


Next week in phase two of this test, we plan to set up three different test tanks with skimmers set to different air draw rates in each. After dosing organics into the test tanks, we can gauge which air draw setting performs best and really get to the heart of this conversation. 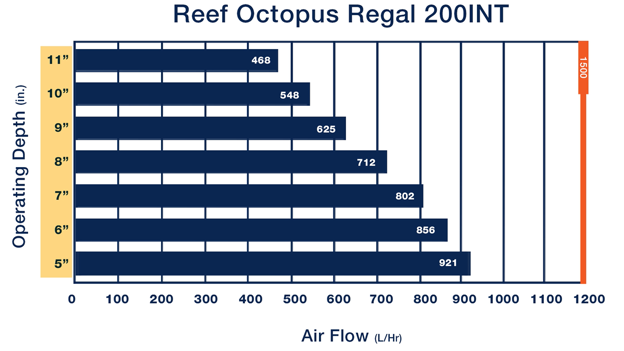 Starting with the 200INT, which is the single pump skimmer design, we see that from 5”inches to 11” the air draw performance is absolutely affected. Overall there was a about a 49% -percent loss in air from the lower operating depth to the higher and it looks as though the sweet spot for this particular skimmer is in those lower sump water levels and probably where I would personally install it on my own system. 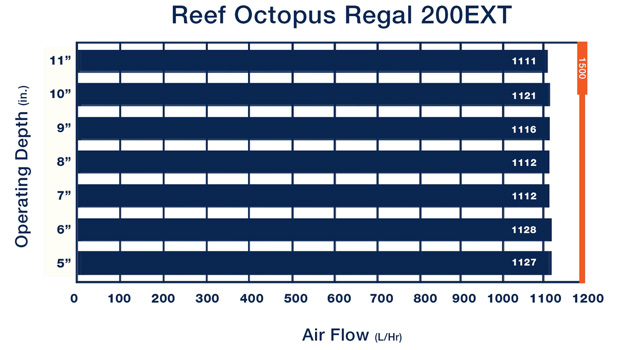 Taking a look at the Regal 200EXT in a similar test, which utilizes the VarioS-4 pump in a recirculating configuration for the sole purpose of drawing air to create foam. Immediately we see hardly any change in air draw. There’s only a difference of 17-liters per hour from the highest measured air draw to the lowest. It is easy to see how splitting the job of air intake and water flow between multiple pumps creates more stability regardless of how it is installed.


Next we are looking at the results from our second test in which we submerged both skimmers into the same water level of 7” and measured the air draw at varying pump speeds. 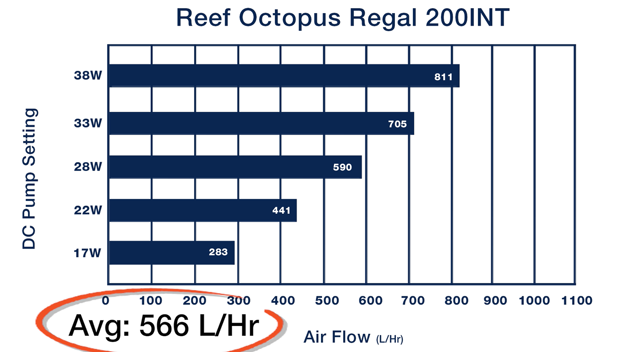 Starting with the Regal 200INT single pump design, across all 5 power settings we measured an average of 566-liters per hour air draw. 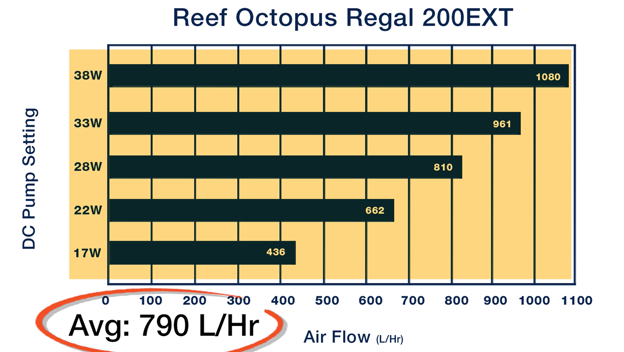 Looking at the Regal 200EXT recirculating skimmer, we measured an average of 790-liters per hour or 40% more air over the single pump design. Just for the sake of consistency note the wattage was measured exactly the same for each power setting between the two skimmers. 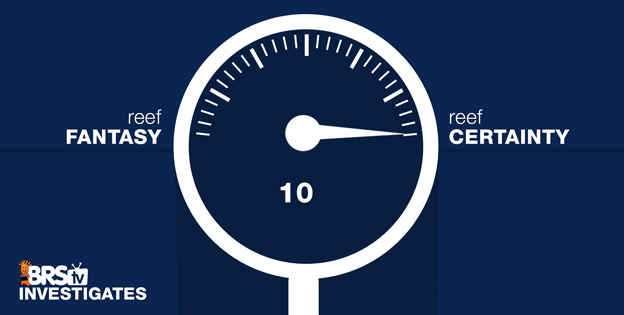 Is a recirculating protein skimmer more stable and easier to tune than a single pump skimmer?

Randy rated this one a rare 10 out of 10 on the reef certainty scale because the data obviously shows you will get more stable performance, regardless of water level, from the recirculating skimmer. The reliable tuning makes recirculating skimmers easier to dial in and meet the needs of your aquarium as well. 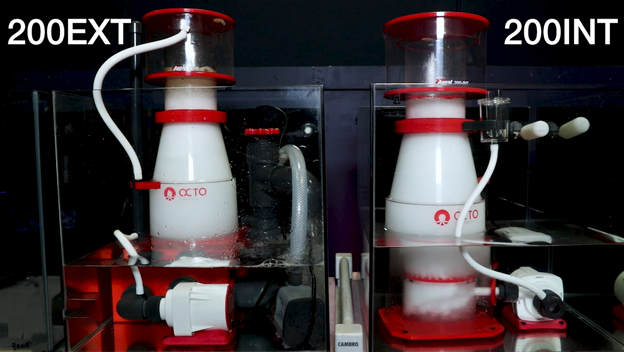 So with adjustable DC pumps like these, we can see that there is an added layer of adjustability for both designs in that you can simply push a button to reduce the amount of air draw. In the case of a single-pump skimmer, however, a reduction in the pump speed not only reduces the air draw but also reduces the amount of water flowing through the skimmer whereas in the recirculating design your flow rate through the skimmer body would remain the same.


For similar designs using AC pumps the same effect is achievable for recirculating skimmers where you can simply install an air valve on the recirculating pump and open/close the valve to let more or less air into the pump without affecting contact time. This is not the case for single-pump skimmers because controlling the air draw with a valve creates a situation where every reduction in air will have a corresponding increase in water flow.


We actually tested this ourselves with three Red Sea RSK 300 skimmer which utilize the Sicce PSK600 AC pump. We tuned each one to a different air draw rate using a valve; 150-liters per hour; 300-liters per hour and 600-liters per hour. At the lower air draw there was definitely less air but way more water flow, which ended up pushing more microbubbles out of the skimmer body and into the tank.


So while you can tune air flow to some degree on a single AC powered pump skimmer, be aware that you might be flushing more bubbles out of the skimmer especially at those extreme ends of tuning.