Tank placement, it matters and certainly something to give more thought than just the obvious. Out of direct sunlight, clear of swinging doors, away from radiant heat sources and of course within close vicinity of an electrical outlet are the factors that most everybody considers. If your building a “forever tank” or something considerably large and difficult to move, there really is more to it than this.


As Ryan puts it, “Every house has a perfect tank match, the trick is finding it.”


The best way to approach this is first where and then what. Meaning rather than start with a desired tank size or shape most people probably are best served finding the perfect place in their home and then thinking tank size and shape.

When tackling the challenge of placing a large aquarium in his home, Ryan realized a few critical factors. We are going to walk through the thought process for each of these requirements and then Ryan takes us on a virtual tour of the BRS360 location inside his home. 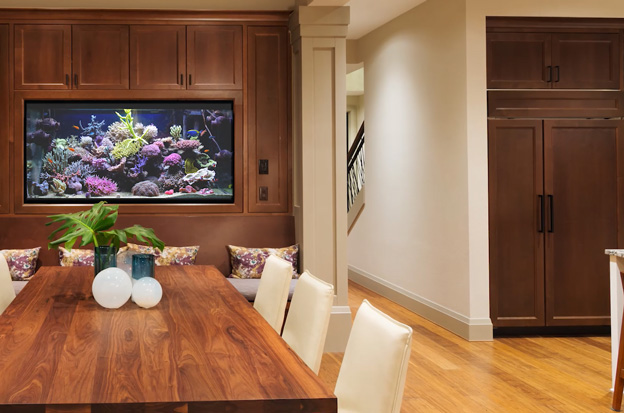 1. The tank needs to be in a living space in which family, friends and guests can enjoy it

Ryan is adamant about placing the tank in a location he can see and enjoy it every day, even if it means choosing a smaller tank than originally thought.


An aquarium you never see is almost synonymous with failure, at least that is the case for Ryan, and failed tanks are a terrible waste of time and money. If this advice can help even just one person avoid a failed tank, this was all worth it, particularly if it is going to be a super huge expensive tank. 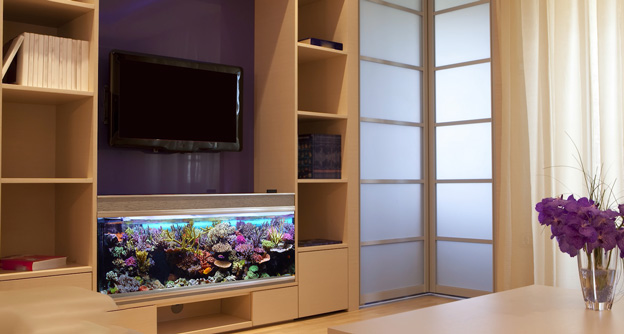 Ryan’s top picks for tank placement are high traffic areas of the house such as a living room, dining room or kitchen which gives you the aquarium encounter multiple times per day for extended periods of time.


At minimum, the room should be used at least once per day for a reasonable amount of time. A home office, well used recreational room, maybe even a bathroom for you adventurous types. Yes, a bathroom and believe it or not it has been done before. 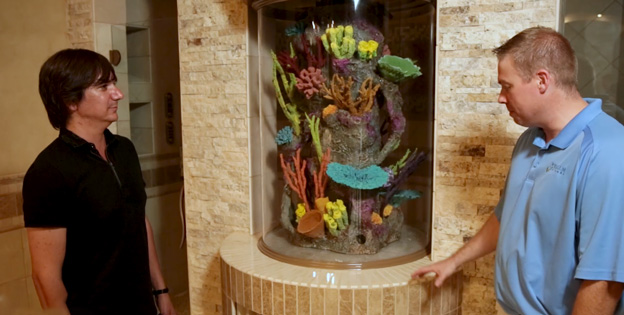 Ryan toured a house with Aquarium Artisans in Cincinnati, Ohio and the tank owner had an aquarium in their shower. Imagine beginning each day with a little tank time, while certainly not the first choice for most, it is unique and cool.


The same house also had a second tank that split up the entryway to the house, living area and kitchen. It’s the first thing experienced as you walk in as well as visible while you cook, eat and relax. Any reputable aquarium professional, like Jennifer at Aquarium Artisans, will take the time to find this perfect place in your home for maximum enjoyment.

Places to avoid are obviously the inverse of what we just said. Don’t put a tank in an area you never use or go into it thinking you will use the space if the tank is there. Habits and behavior are not easy things to change.


That rules out basements that get little to no traffic from the family. There are a lot of attractive things about putting tanks in basements but there are all moot points if treated more like a dungeon than a living space.

Avoid unused home offices, studies, formal dining rooms or any similar low traffic rooms. Bottom line is a large tank is expensive and quite possibly the coolest thing in your entire house so put it somewhere you and the family can enjoy it as part of your natural daily rhythm.

2. The tank is definitely going to be a few hundred gallons so it will be heavy

After over a decade of experience, the BRS360 is definitely not going to be a 29 gallon starter kit, it is going to be big. You should be willing to sacrifice size and shape for ideal placement but only to a certain degree.

With large tank dreams for the BRS360 we need to account for the weight. Saltwater weighs about 8.6 lbs per gallon and some quick math for this 360 gallon tank puts us at 3,096 lbs for the water alone.


With that in mind, pick a place that can already handle the weight or be willing to hire a professional carpenter or contractor to support the floors.


Ryan is willing to do that within reason and the advice here is don’t go blowing a majority of your budget on rebuilding the floors, moving walls and cutting up ceilings unless you have no other choice.

3. A fish room near the tank is mandatory

From the start, Ryan was set on building a fish room where all the equipment and piles of “fish stuff” can easily be managed and organized.


After building the BRS160 and experiencing the convenience of having easy access to all of the life support system and cords for maintenance, it is difficult for Ryan to imagine going back to a situation in which everything is crammed under the tank.


Making the tank easy and accessible is ultimately also what’s going to make the tank successful for a guy like Ryan and likely many of you as well.


The best place is directly behind the tank or below it but a fish room can be anything ranging from a large closet, unused bedroom, or just an area of unfinished basement or garage. As long as you can safely run some plumbing and maybe a few power cords between the tank and fish room, the options for location open up.

4. He is willing to do some work on the house to support the weight and electrical needs but not willing to rebuild from the ground up to accommodate it

Related to #2, Ryan is willing to makes some changes in the home to accommodate this tank but not looking to go through a complete rebuild. Some of the main things to consider are access to power, water and a drain in the fish room. While not mission critical, these things will make system design and ongoing maintenance much easier again contributing to the overall likelihood of successful husbandry.


A large tank will require a considerable amount of power, likely more than a typical 15 amp circuit can handle, so this should be your first priority and critical to your tank’s operation.


Access to cold water in the fish room falls somewhere between mission critical and just nice to have. Nobody likes hauling buckets of water around the house which most always results in damage to the home. So if it takes some investment to run a water line consider this… 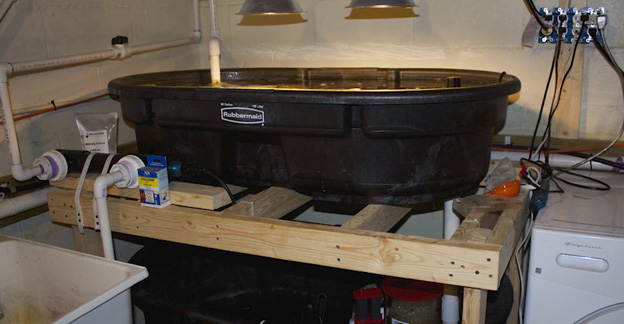 Having access to a sink is the last component to a perfect fish room. The ability to empty and clean equipment right next to the sump is so much more convenient then dripping a dirty skimmer cup across your carpet. Although this is the last of the priorities for a successful fish room, the convenience alone is enough to make it worth the investment.


Same case with a floor drain, spills are inevitable and a floor drain installed through a tile or waterproof floor is uber convenient in a fish room. You can quickly and safely dispose of spills but also easily clean and maintain equipment without the need for piles of towels and annoying clean up. 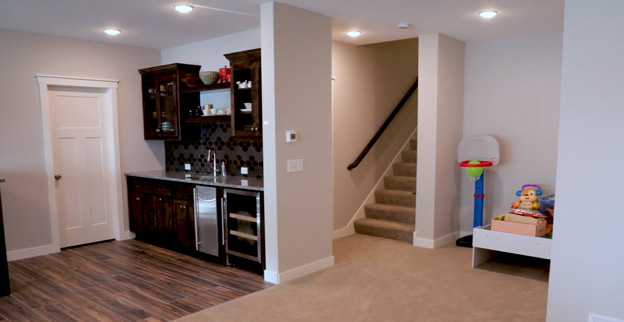 Where is the BRS360 going to be located?

In the video Ryan takes us through a tour of his home. The way his new home is designed sort of ruled out any of the typical living spaces. Being on the second floor of the home means Ryan would need to spend thousands of dollars reinforcing the floor to support a large tank and then also build out a fish room.


That led him to the basement, which as he stated earlier is not the first choice if not heavily used, but in this case the room lends itself to be a pretty awesome bonus room. It is a walkout basement, built into a hill with one large wall of windows that leads outside creating a pleasant, bright space. 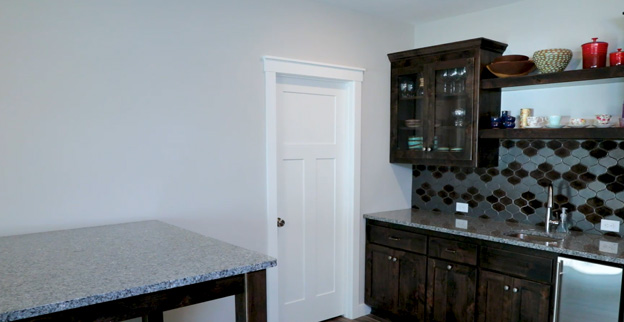 This is where the story takes a twist, the basement naturally gives up two nice locations for a large tank. One area was already tiled and sort of a natural fit for the flow of the room. It also has a closet directly behind the wall that butts up against the utility room so getting water and power into the proposed fish room would not be difficult. Being a closet, the fish room space is small but seemed to be perfect so Ryan ordered a tank for this location.


Then he changed his mind ...an expensive misstep.


Ryan was hung up on the small fish room, he initially thought he could make it work but it kept eating away at him. It became obvious that filming inside the small closet would be next to impossible and aside from being Ryan’s ultimate reef tank, sharing this tank build with all of you is the mission. 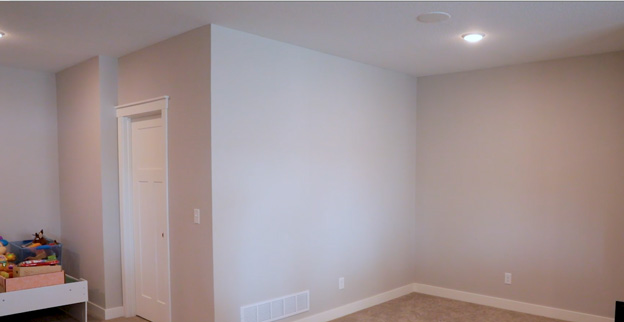 Ultimately the spot the tank will be located across the room on an adjacent wall. The reason this wasn’t his first choice is because it’s not a primary area of the room and remember this is hands down the coolest thing in Ryan’s house. Rather than showing off his custom kitchen, lush garden, fancy art or home theater, Ryan will be most proud of his enormous thriving reef tank. In future episodes, you can expect to see how Ryan designs the room around this tank to live up to those desires.


This particular location does have some benefits with a large unfinished room behind the wall which contains the electrical box and a utility sink already. One of the main drain stacks for the home runs right through the room as well, so putting in the floor drain shouldn’t be difficult.


The tank itself will be going onto a cement slab so weight will not be an issue. Ryan decided to move his home office down into the basement as a means of increasing daily traffic into the space. 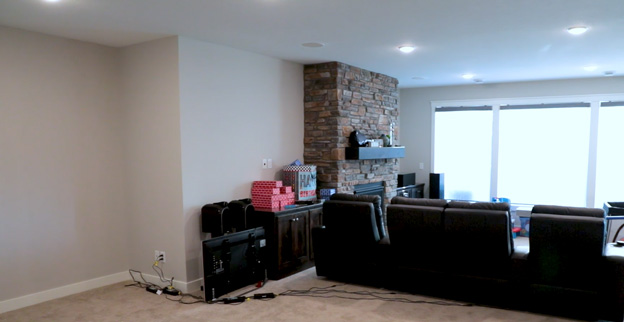 The remainder of the basement will be used as a rec room with fun stuff for the kids to make it enticing for the family to want to spend time next to the tank. Changing the flow of the house and not just assuming a behavior change is the best way to get around a complete rebuild and also ensure optimal exposure to the aquarium display.


Moral of the story, it’s not always easy finding the ideal tank location in your home but with enough forethought, you can almost always find the perfect place.

Join us for BRS360 LIVE Episode 5.1 as we continue the conversation with Terence Fugazzi from Neptune Systems, the leading aquarium controller company in the USA. Terence is the Vice President of Sales and Marketing at Neptune Systems and also the host of #letstalkreef.


Ryan, Randy and Terence will be talking tank placement and Terence shares some of the challenges he faced while installing his dream tank.