Are Your Reef’s LEDs Optimized for Your Corals or Is It All About You?

When using multiple LED lights over a reef aquarium, both the mounting height and spacing in between the LED lights have a big impact on the light spread inside your aquarium. With the ultimate goal of creating the most ideal environment for our corals, BRStv Investigates tackles a BIG question that many of us face when setting up our aquarium lights and the answer just might change the way you have your lights mounted over your tank! 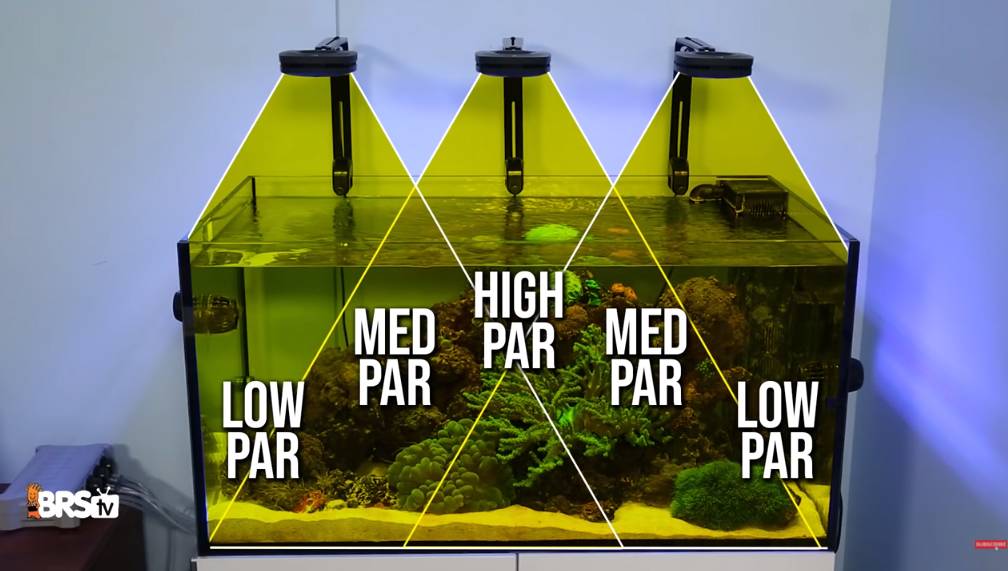 While many of us tend to gravitate toward evenly spacing multiple light fixtures over the top of our reef tanks, this is often not the best way to achieve an even distribution of PAR.  We agree, the uniformity looks nice but this often results in an inconsistent spread of light. The overlapping light spreads and reflection of light off of the tank walls creates areas of varying PAR which can be problematic for supplying an evenly distributed spread of PAR over your reef.

Looking at the results, we made some interesting observations. Both the Orphek and Phillips Coral Care do an incredible job of evenly distributing the light when mounted using a balanced spacing. All of the remaining lights performed best when mounted using the same optimal spacing with LED pendants moved closer to the outside edges, ultimately reducing the center hotspot.

This just goes to show how the different LED lights and their particular spread of light really do affect the way you should mount them. It also suggests that using the optimized spacing is more often a much better choice but is it is ultimately dictated by the particular lights your using.

With three light fixtures placed over the same 48" tank, we sampled five different brands of LED lights. The balanced spacing was set right at 12" even spacing between all three lights. The optimized spacing proved to vary slightly between each brand of light but in every case, one fixture remained dead center and the outside lights were moved closer to the edges.

We are starting to see that evenly spacing your lights across the top of your tank very well may not produce the best distribution of PAR. While the exact optimal spacing may vary slightly from fixture to fixture, there is an obvious benefit to creating a wider gap between the outermost lights and the center light.

When we tested four light fixtures, the optimal spread varied slightly again but certainly suggests the same approach.  You can accomplish a much more evenly distributed spread of light moving the outermost light fixture closer to the edges as opposed to evenly spacing them. This is because you're effectively reducing the center hot spot by eliminating or reducing the overlapping spread of light in the center of your tank that you get when they are evenly spaced.

This particular configuration poses a challenge because there really are thousands of combinations in terms of light spacing. We decided to approach this using zoning where each Prime HD was mounted to cover a 12" x 12" area over the 48" long tank. By reducing the output intensity of the centermost Prime HD fixtures to 40%, we reduced that center hotspot and were able to achieve a relative score of 84%.  The outermost average PAR zones came within 84% of the center average.

As a hobbyist, you don't really need a PAR meter to find the exact optimal spacing. Just follow the guidelines below to optimize the distribution of PAR across your aquarium based on the number of fixtures you are using.