Are some calcium reactor media types more potent than others? - BRStv Investigates

Although there is a relatively small selection of popular calcium reactor media, people still ask which one is the best? Trying to truly define the “BEST” is difficult because it can be subjective based on an individual’s needs and preferences.

So when it comes to choosing calcium reactor media, the decision could be made on lowest cost, size options, highest purity or where the media was sourced, dissolvability, amount of major/minor/trace elements they provide, or even just by popularity and longest history of users overall.

Either way, there is definitely more information to be learned about the various reactor medias. At the very minimum, we attempt to answer the following question.

This data will determine if one media will provide a higher concentration of calcium carbonate over another at a given pH point and when combined with the various other aspects of the media will help you choose the right tool for the job in YOUR tank. 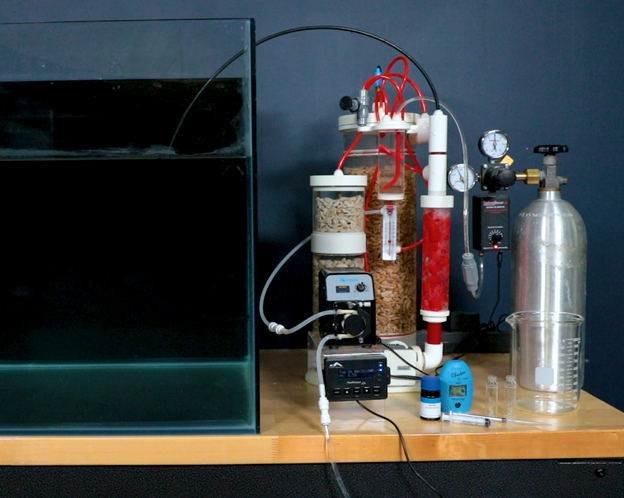 We have already collected some data in a previous BRStv Investigates experiment for Two Little Fishies Reborn inside a Vertex RX-C 6D Calcium Reactor. We tested the maximum saturation of the reactor effluent (outlet) solution by measuring the alkalinity concentration coming out of the reactor at the common pH set points of 6.4 and 6.8 with a very slow flow rate of 5mL/minute.

So we applied this same experiment model to the two other leading calcium reactor media choices with similar size granules; the Caribsea ARM Coarse and Brightwell Aquatics CoraLazarus.

The results of our experiment also give us some insight into how the different granule size and shapes affect the effluent concentration. When comparing all three, you can see some obvious differences. The Two Little Fishies Reborn is without a doubt small bits of very porous coral skeleton in a variety of shapes. CaribSea and Brightwell are both more evenly shaped and less porous aragonite media with the CoraLazarus being slightly smaller in granule size on average. 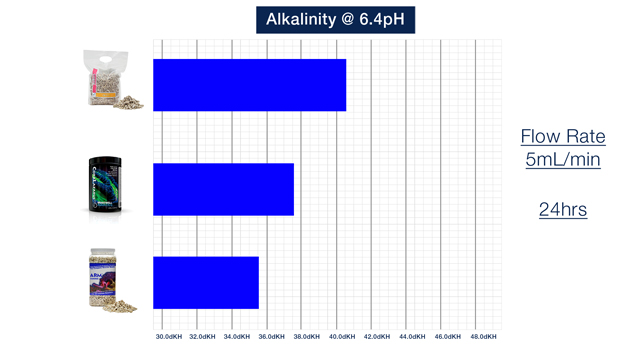 After a full 24hrs of each media running at this low range pH setpoint of 6.4, the graph above shows the results from our alkalinity tests.

Although the Brightwell and CaribSea seem to be very similar media types, it looks like the slightly smaller granule of Brightwell’s CoraLazarus creates more surface area making it easier for the CO2 to dissolve the media resulting in an average 5% higher concentration.

We can also see the very porous coral skeletons and therefore high surface area of Two Little Fishies Reborn resulted in much higher average concentrations all around; 7% higher than CoraLazarus and 12% more than CaribSea ARM. 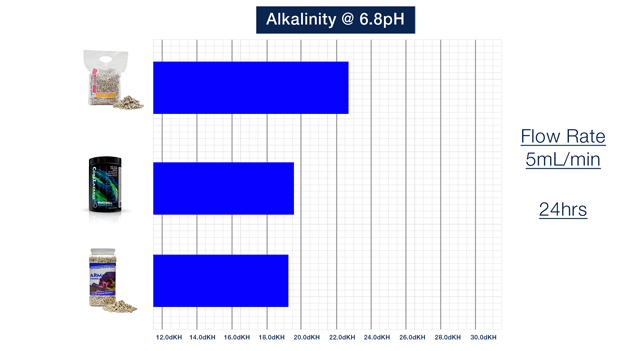 Again, we recorded a difference between the three media types at this higher setpoint of 6.8. Surprisingly, the increase in concentration from the Two Little Fishies media over the other two was even more pronounced at this higher setpoint. Reborn produced a solution that was 15% more concentrated compared to CaribSea ARM Coarse and 16% more than Brightwell Aquatics CoraLazarus.

We also noticed a less pronounced difference in the similar aragonite type medias (Brightwell and CaribSea) which was only a difference of 1% between the two. 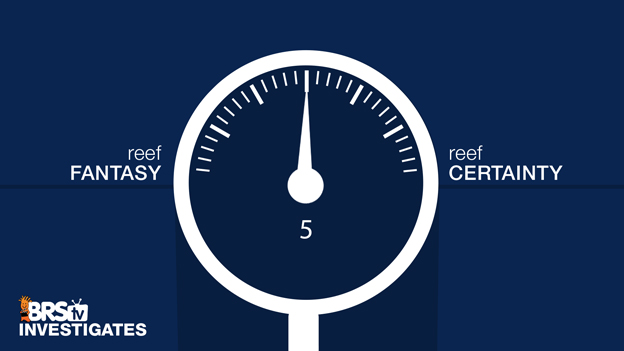 Based on the data collected, we gave this a 5 on the scale since there is clearly a difference between the Two Little Fishies Reborn calcium carbonate skeletal media type compared to the other two aragonite based medias.

The subtle differences, however, between Coralazarus and ARM indicates it is not likely the media material itself but rather the size and surface area differences between the media contributing to a majority of the changes in concentration.

The more surface area the media provides, the quicker it will dissolve at the given pH setpoint resulting in a higher concentration of alkalinity in the effluent solution. 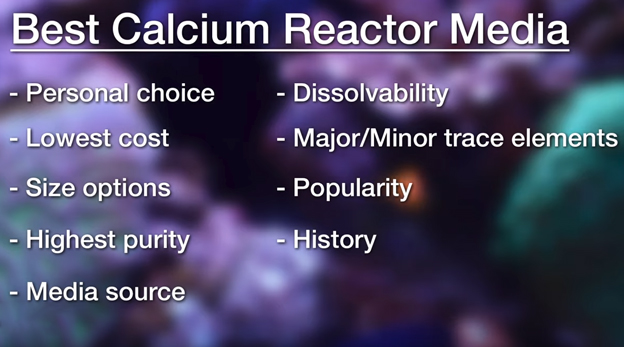 The right media selection has the potential to provide more calcium and alkalinity to your tank at lower dosage amounts when compared to others and that means less impact on your tank’s pH. This also means less CO2 consumption will be required to meet your tank’s demand.

Just for fun, we calculated the costs per pound of each media based on the current retail price. If cost is your highest priority, than the most economical option, CaribSea ARM, will be your best choice.

As mentioned early on and consistent with many of our BRS Investigates experiments, trying to define the absolute best is not black and white and in most cases really depends on the particular reef tank and desires of the individual.

Watch Video: How to change from 2 part dosing to a Calcium Reactor? - BRStv ReefFAQs

View Playlist: All BRStv Videos about Skimmers, Reactors and Filtration