This Ask BRStv question, “How does the Aqua Illumination Prime Fuge HD LED stack up?”, came to us from our sponsor forum Reef2Reef.com. We tested the PAR and Spectrum to see how this new LED light from Aqua Illumination stacks up against the competition. 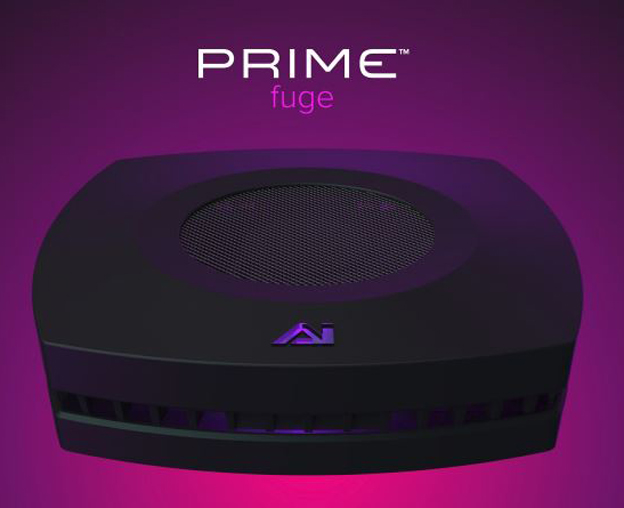 Aqua Illumination included the same convenient and smart control options on the Prime Fuge that is included with their entire HD lineup of aquarium LED lights.

You first have the option for manual control which is essentially plugging the light into a classic wall timer or aquarium controller and use one of the six available preset intensities.

You can also connect directly to the AI Prime Fuge with it’s internal wiFi signal using the myAI app from your mobile device. Here you can gain complete control over the intensity and color spectrum as well as create custom lighting schedules. 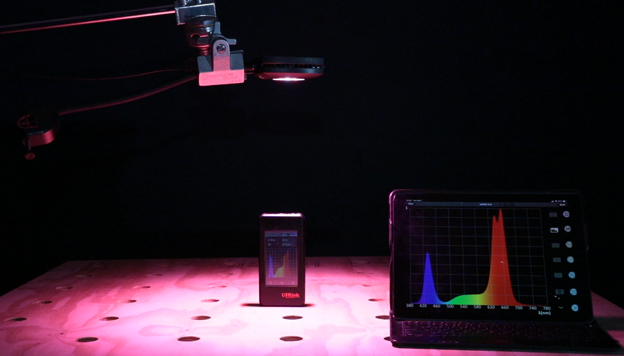 It is commonly understood and agreed that Chlorophyll A’s energy production for metabolic function peaks around the 662 and 429 nanometer range and for chlorophyll B production it’s slightly different with a bit less red at 642 nanometers as well as a somewhat lighter blue color at 445 nanometers.

First, we set the entire 13 LED diode cluster to 100% output and we saw significant spectrum peaks right at the red 660 and 640 nanometer range as well as a decent spike in the 440 nanometer range. Looking at the spectral plots for optimal chlorophyll production it is quite obvious the light was optimized for this range because of the very similar spikes in color spectrum.

Therefore, our best advice based on these spectrum tests is to run all color channels at equal percentages across the board for optimal photosynthesis in your refugium. 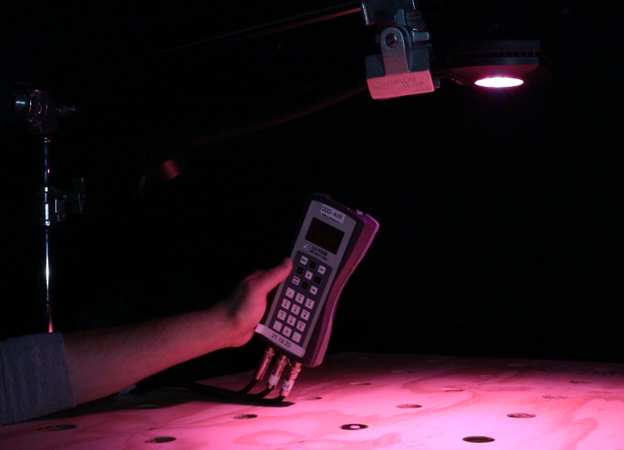 We took PAR samples at 12” inches and 24” inches above the PAR meter and tested the light in the air rather than underwater because Chaetomorpha has a tendency to float up near the surface of the water which means this would be a more accurate representation of the actual PAR values the chaeto will encounter. 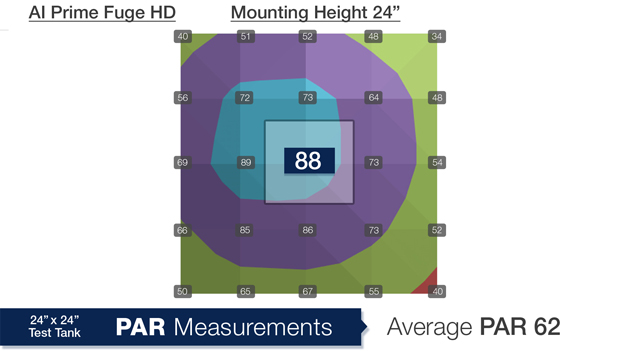 Starting at the highest mounting height of 24” inches, we see an overall average of 62 PAR on a 24” by 24” square. The light is fairly evenly distributed by the 80° optic lenses with 88 PAR in the center, 77 PAR in the inner ring, and 52 PAR in the outer ring. 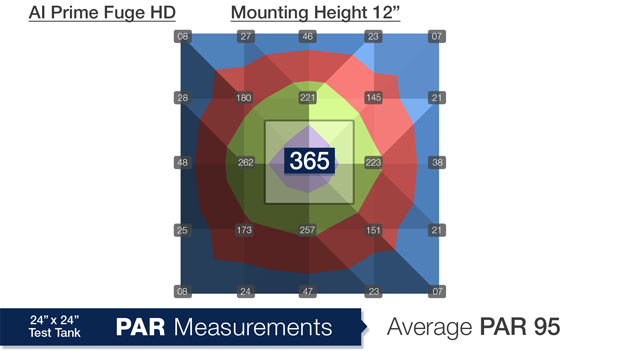 Moving the light down to a 12” inch mounting height, the average PAR increased to 95, however, the spread is less evenly distributed across the 24” by 24” area. Our tests reveal a big hot spot in the middle at 365 PAR followed by an inner ring average of 201 and an outer ring average that falls off to 25 PAR.

This drastic change in PAR distribution was not surprising because it is tough to expect a tight cluster of LEDs to have an evenly dispersed lighting area that close to the surface. 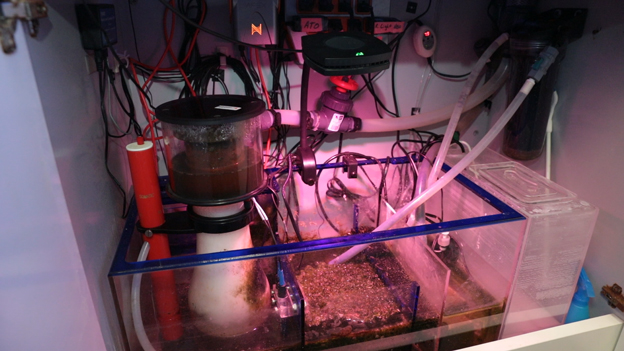 It is perfectly capable of lighting a refugium space of 18” x 18” or less which will accommodate a majority of refugiums on tanks under 200 gallons.

Although there is fairly even light distribution when mounted at 24”, the low par values and limited space under your tank would not be ideal for your refugium. You will likely get better results when mounted somewhere in the 14” to 18” range for more optimal PAR values without sacrificing too much light distribution. This is easily accomplished using the 18” AI Prime Flex Arm Mounting option that conveniently clips onto the side of your sump or refugium and should fit nicely inside most tank stands. Larger refugium spaces (greater than 18" square) would simply require a second fixture to accomplish a suitable spread at this mounting height. 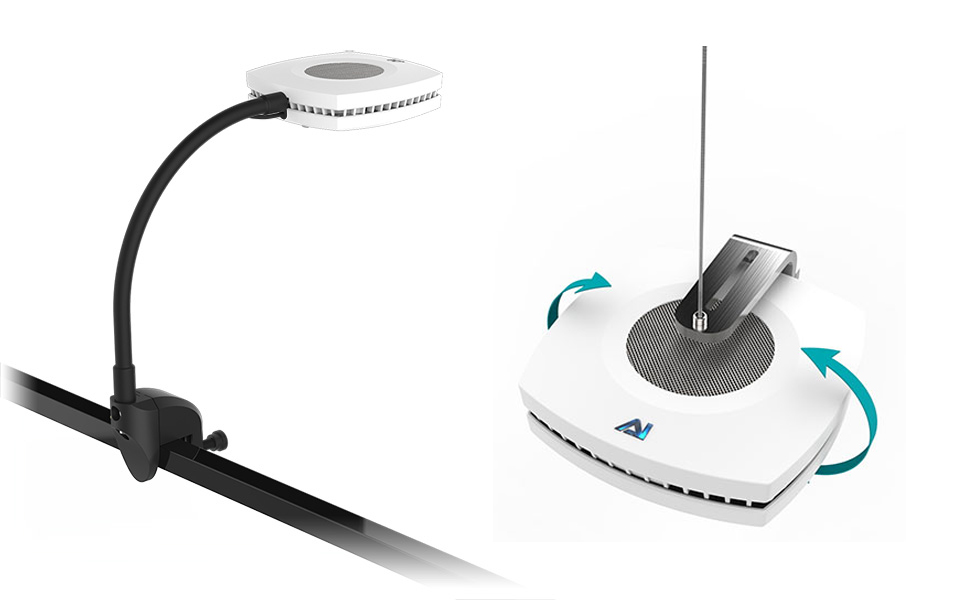 If you are using this over a refugium area smaller than 18” x 18”, you can mount it as low as 12” from the surface of the refugium, just be sure to simply tune each LED intensity slider down in equal proportions to reduce the PAR hotspots directly under the light. Over time, as your Chaetomorpha acclimates to the light levels, it may be possible to increase the PAR values to encourage faster growth.

Refugiums as a primary filtration method has really taken off in recent history. The conversation about differences in spectrum and intensity among the most common refugium lighting options and how that can affect your refugium is a hot topic and be sure to check out our BRStv Investigates episode in which we dive deep into this subject to understand how it all works.