The Flashiest of Wrasses: The McCosker's Wrasse! 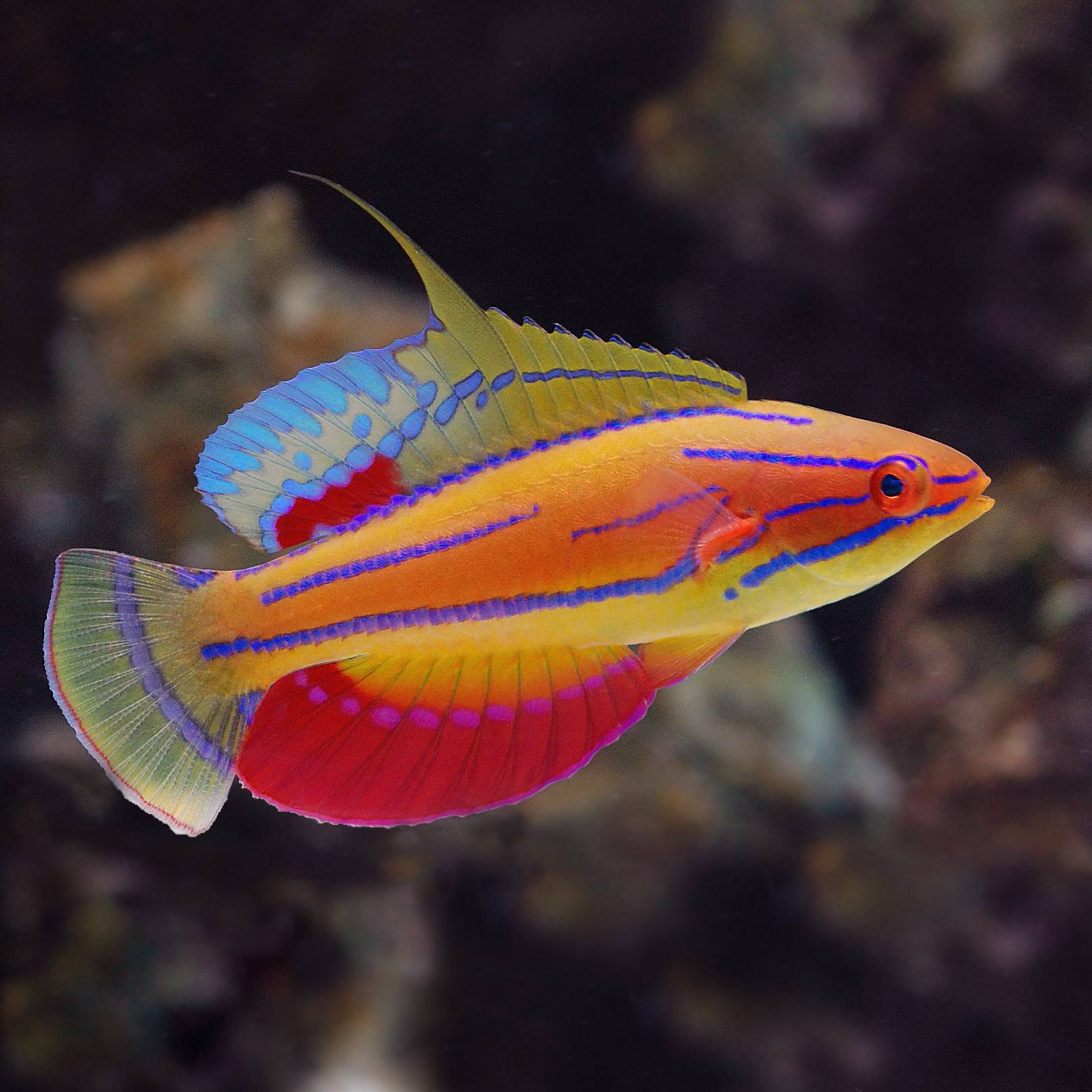 My parents set up a 30 gallon reef tank about 6 months ago, and they were looking for one perfect fish for their tank. I suggested clownfish, but they think those are are boring. I showed them dozens of easy, peaceful, small reef-safe fish, and they fell in love with the McCosker’s wrasse.

Paracheilinus Wrasse or McCosker's Flasher Wrasse do best in 55 gallon or larger aquariums, but we planned on them being the only fish in the 30 gallon tank. My parents bought a male/female pair at our local fish store on an impulse, worried someone else would buy them.

I stopped by their house to help acclimate the fish, and realized they had not yet installed the net around the aquarium’s canopy to prevent the fish from jumping. I knew from previous experiences with this fish, it is imperative to have a fully enclosed top. These fish can jump high, and they can jump accurately. If you have even a tiny, unnoticeable gap between your net and a U-tube or heater’s wire, they’ll find a way to get through it.

Luckily, they had some fine mesh netting in the basement, so we were able to cut it and staple it to the canopy temporarily while the fish drip acclimated. 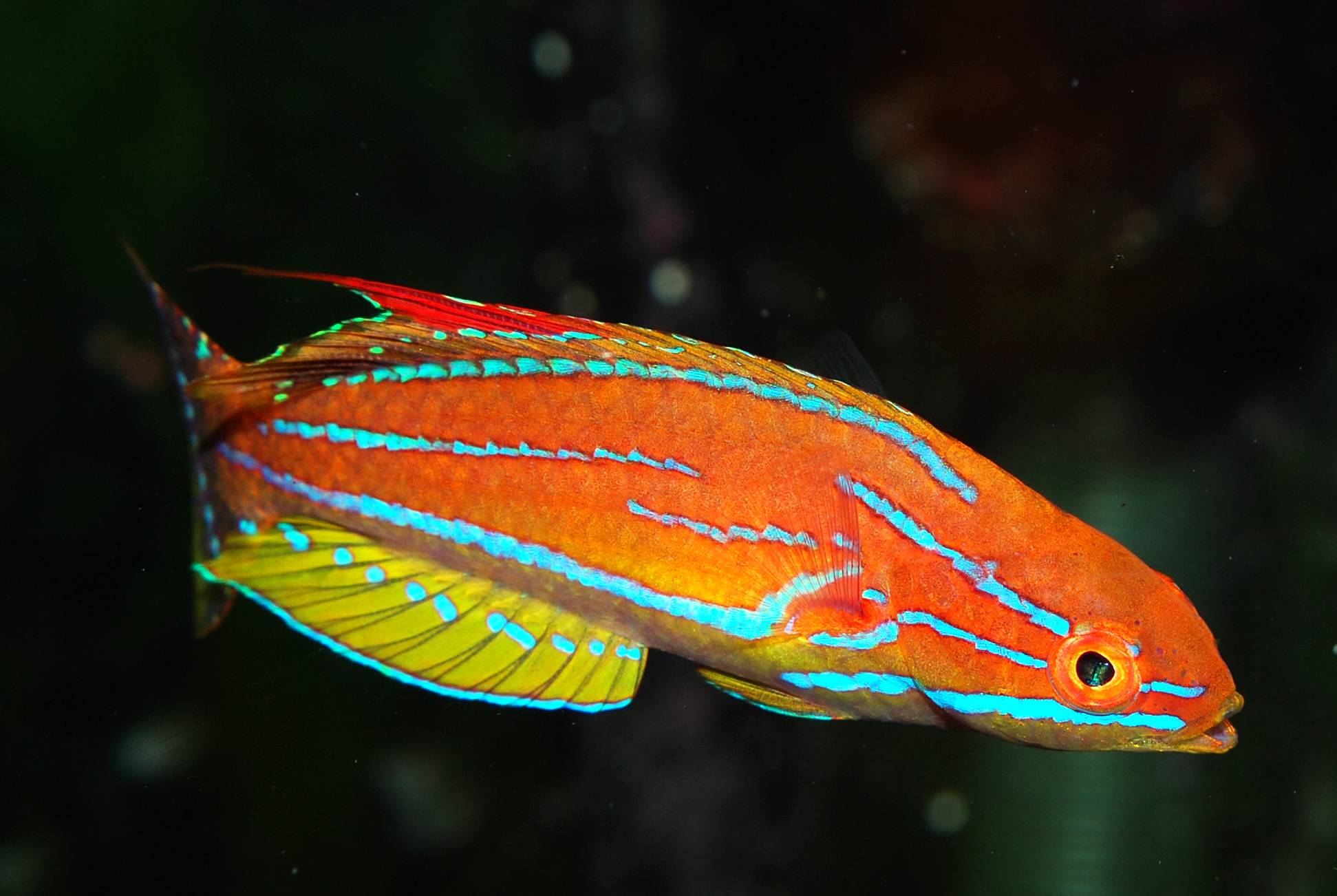 They were worried that the fish looked dead in the acclimation bucket, but I reassured them that it is normal for this type of wrasse to lie down and appear mottled for camouflage. It’s also common for them to do this in small containers, but they recover quickly when given room to swim. Don’t be alarmed if you see your fish lying on the bottom of the tank at night covered in slime, since these fish form mucous cocoons at night to sleep in.

I warned them that the fish might hide for a while, but our LFS did a great job of conditioning them. They were out the next morning, eating frozen mysis shrimp and brine shrimp. We plan to also add some tasty, nutritious oyster eggs and copepods to their diet to help provide a more complete nutrition, besides who wants to eat the same thing everyday?

I recommend quarantining all new fish. This species tends to suffer from Monogenean Flukes, which are microscopic or tiny clear flat worms that crawl on the skin and eyes of the fish, eating the mucous and causing damage. A short freshwater dip (make sure to match the pH to your tank) can remove most of the flukes, and treatment with Praziquantel in the quarantine tank can remove any leftover flukes.

It’s also a great idea to treat these fish for Cryptocaryon, aka ICH, before they are added to your display tank with other fish. They don’t tolerate Copper or Chloroquine Diphosphate well, so use the tank transfer method instead. If you notice your fish losing weight despite eating well, treat for internal parasites by soaking their food in Metronidazole and Prazi-Pro. 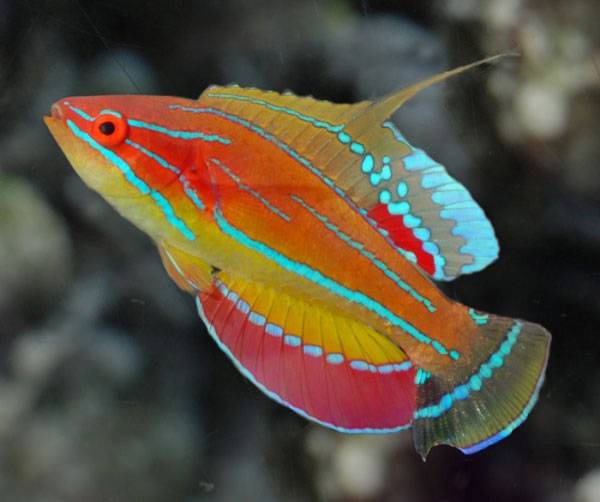 These fish are always beautiful, but when they display their “nuptial colors,” they are downright electric. The Males will display for females, other males, or mirrors. The male will flare all of his fins as large as possible while doing an erratic back and forth dance. The blue lines on his body appear to glow from the inside. The more females you have per one male, the more he will flash and display. It’s best to have just one male per tank, but some experienced keepers have multiple males in large aquariums.