Is this wet or dry? A better way to tune your skimmer…Could the answer be air? | BRStv Investigates

The quest for more valuable protein skimmer knowledge continues and this week on BRStv Investigates Randy is testing the effect of airflow adjustment, instead of foam level, to manipulate wet versus dry skimmer collection which might turn out to be one of the best benefits of using a DC powered skimmer. 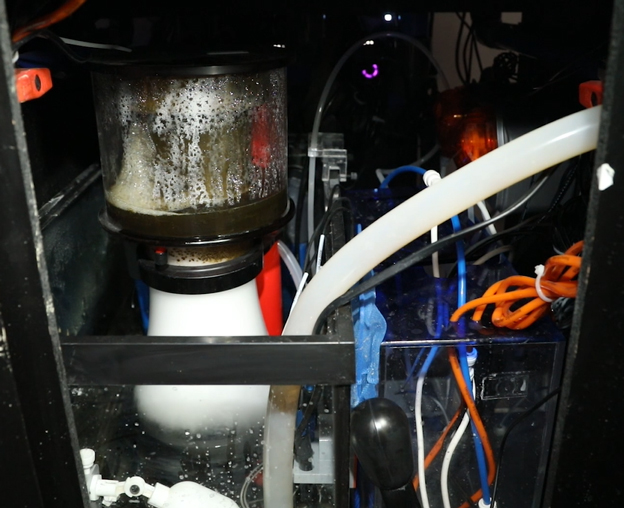 The challenge that we are trying to overcome with our protein skimmer testing is to gain more usable knowledge around skimmer tuning. Historically, the only guidance we get is from the manufacturer who tells us the optimal sump water depth and to adjust the gate, ball or riser tube (outlet) valve until you achieve the skimmate production you’re looking for.


People say that adjusting the valve produces a wetter or drier skimmate, but does it? Without changing the dynamics of airflow all you’re really doing is pushing whatever foam your skimmer is capable of producing higher up in the body, closer to the collection cup and then calling the rate that it collects into the cup either wet or dry. In most cases, the foam does not change to be wetter or drier.

It is safe to say, all of us want the best performance from our skimmers and many of us have had our fair share of frustrations when tuning a skimmer with either little to no waste removal or constantly overflowing the skimmer cup. At the same time, other hobbyists using the same exact skimmer are getting excellent results.


We aim to get closer to the bottom of that notoriously finicky skimmer performance by testing whether or not adjusting the amount of air going into the skimmer is a better way of achieving wetter or drier foam. Within that, can we then adjust the foam level to change the rate at which the foam is collected?

We approached this from a few different perspectives wherein two tests we used three of the Reef Octopus Regal 200EXT DC recirculating skimmers and adjusted the pump speed to change the air draw.


We learned from the last experiment that the recirculating design not only gave us full control over air draw, but compared to a single pump skimmer using the exact same pump, we were able to achieve up to 40% more air.

In test #1 we set each of the Regal 200EXT DC skimmers to different air draw rates using the push-button speed adjustments on the DC VarioS pump. We then set each skimmer’s water level inside the body to the same height and began dosing 5ml of organics every 10 minutes. No further adjustments were made.


In test #2 we used the same 3 different pump speeds in the same order as the first test, however, this time we actively tuned or adjusted the water height using the gate valve as we dosed the same 5ml of organics every 10 minutes.


For test #3 we used three of the Red Sea RSK 300 AC pump driven skimmers and we manually set each skimmer’s air draw using a ball valve attached to the venturi or airline tubing. We then monitored the performance as we added the same 5ml of organics every 10 minutes. 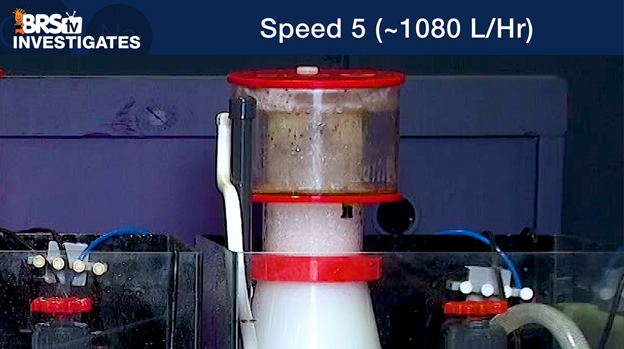 In tank 3 with the max airflow, we see wetter, bigger bubbles that rise and pop rapidly. It is obvious that there is a ton of turbulence inside the skimmer body which actually forces the wet foam up and into the collection cup quickly. The minimal dwell time does not allow for a highly concentrated foam head to develop. The rapid rising and popping of bubbles creates a less concentrated, more fluid collection or “wet” skim. 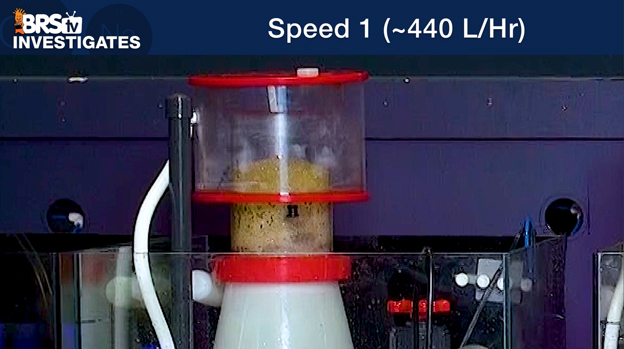 In tank 1 with the lower air draw and pump speed the foam is stable and slower moving. This longer dwell time allows for a thicker and darker colored foam head with a higher concentration of organics. There is less fluid in the cup which is the definition of a dry skim but ultimately higher concentrations of waste in the fluid that is collected.


It is obvious that the amount of air directly affects the wet or dry skim. Less air results in slower rising bubbles and thicker more concentrated skimmate and vice versa, more air almost always results in wetter skimmate because of the faster more turbulent rising foam. 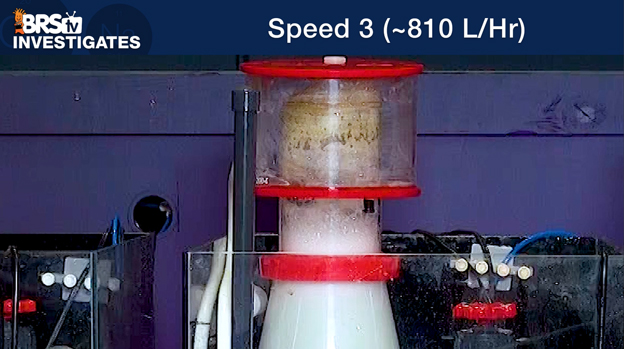 In tank 2, with the pump speed and air draw right in the middle of the road, the results are exactly what you would expect with a foam head color and viscosity somewhere between the other two. The point being, it is very obvious the change in air draw directly affects the skim to be wetter or drier. 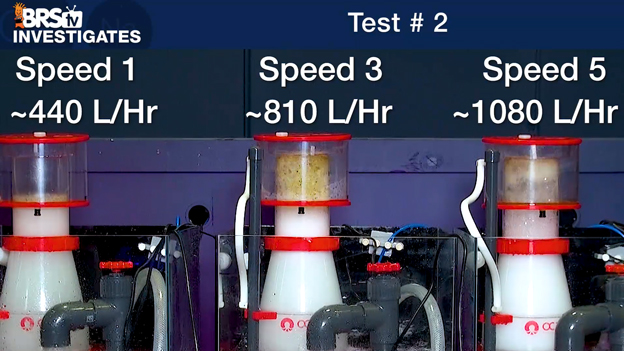 Looking at the time-lapse of all three tanks, we’re basically seeing similar results across the board. Tank 1 still creating a very thick dry foam, tank 3 producing a substantial amount of bubbles and wet foam and tank 2 splitting the difference. It’s just obvious that controlling the amount of air has a great impact on the type of foam skimmers are producing.


The largest takeaway from this second test is we now know how to control the skimmate collection. Increasing the water height inside the skimmer will push more of the dry skim foam into the cup rather than allowing it to collect on the sides of the neck. Lowering the wet skim foam will collect less water, yet still produce a less organically concentrated watery skimmate. 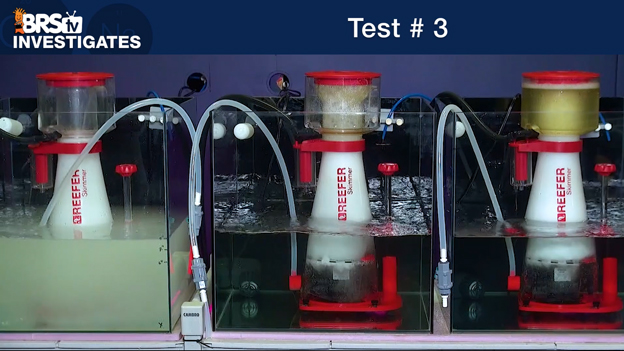 For test three we tried similar air adjustments using Red Sea RSK300’s which are single pump AC skimmers. A 3/8” Mur-lok ball valve with 3/8” stem by barb adapters attached to the airline was used to control the amount of air entering the pump in the same lower to higher airflow order.


We can see that restricting the airflow on these single pumps still worked well on the middle skimmer, however, with skimmer 1 on the left the water flow through the skimmer has increased so much that it is forcing microbubbles out of the skimmer body and into the water.


When you restrict the airflow on a single speed AC pump like this, the pump will replace the decrease of air with an increase of water which will dramatically increase the flow-through rate of the water. This forces the microbubbles out of the skimmer and it fails to collect waste.

The takeaway here is that you can restrict airflow using single pump AC skimmers but only down to a particular point and the lowest levels of air draw will not work. 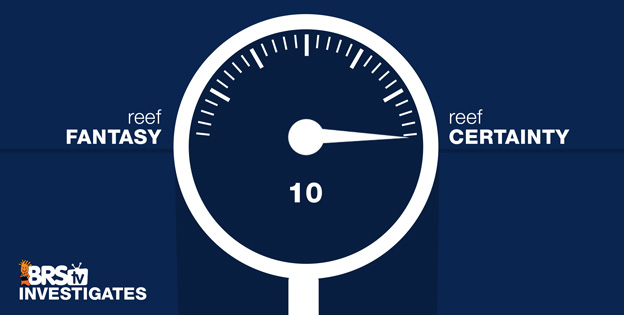 This gets a 10 out of 10 Reef Certainty for airflow restriction being the most effective method of tuning your skimmer or changing the type of foam to be wetter or drier.

Relying on the airflow adjustment gives the water height adjustment a fundamentally different purpose altogether where rather than use it to tune the skimmer on its own, we now can use it primarily as the skimmate collection rate adjustment while leaving the actual “tuning” to the air draw adjustment.


We also showed a distinct advantage to using a dual pump DC recirculating skimmer versus a single AC pump because the airflow can be adjusted without affecting anything else and gives the user a wider range of acceptable airflow levels. 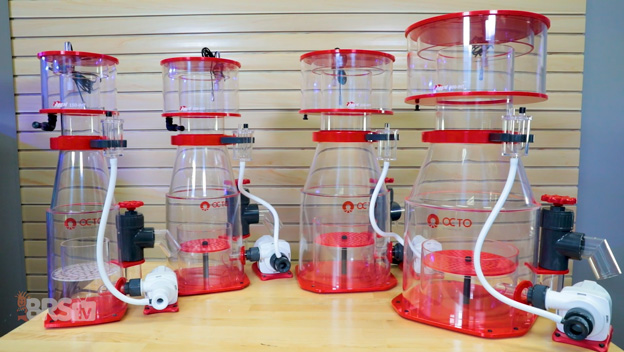 What about the best of both worlds meaning a non-recirculating single DC pump skimmer like the Reef Octopus Regal 200 INT? In this case, you would be able to adjust the air draw and pump speed in unison but in doing so will we see the similar stability and performance as we did with the recirculating skimmer?


Tune in next week to find out as we continue our mission to nail down protein skimmer operation and provide all of you with straightforward advice that you can rely on to get the best performance out of your protein skimmer.