This list includes Matthew's top ten coral recommendations for new reef tank owners. The corals highlighted have been selected based on ease of care, availability, and affordability meaning all of them should be reasonably tolerant, easy to find, and affordable.

Matthew split the list up into three different videos, just scroll down to watch the additional videos. Clicking on the coral listed below will take you to the appropriate section to learn more. 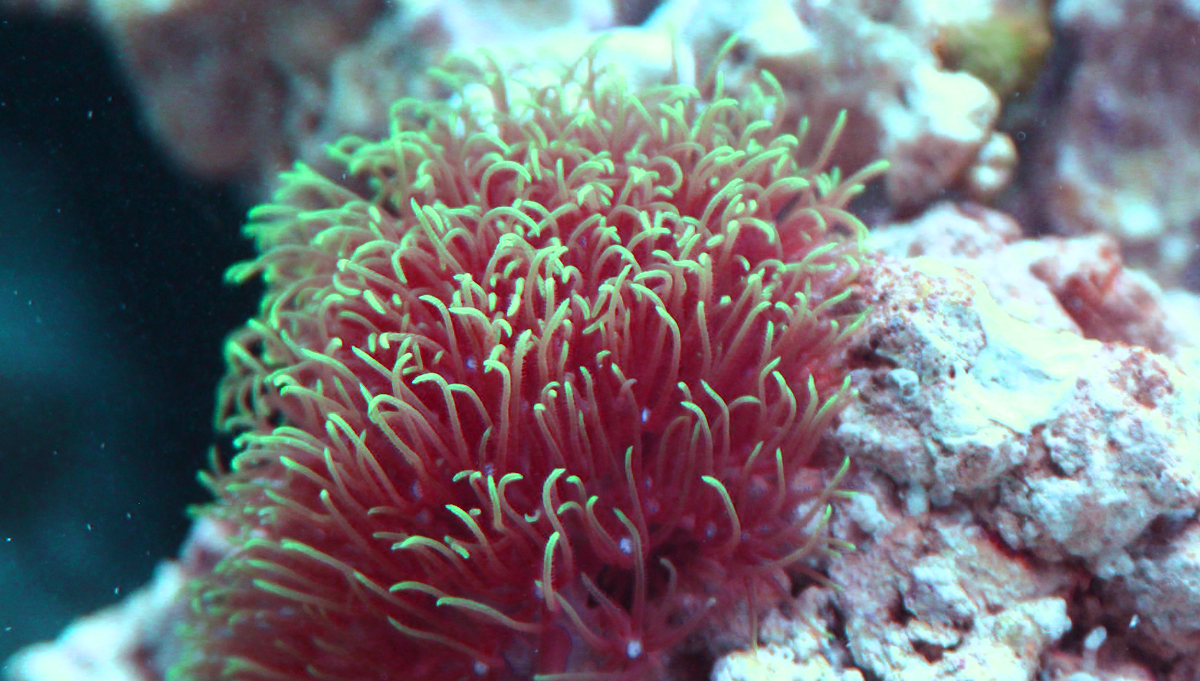 A classic soft coral that encrusts the rocks with a bright green mat of small waving polyps. The mat is a brilliant purple which contrasts nicely with the neon green polyps creating beautiful vibrant colors in your tank. Pachychlavularia Violacea is a scientific species name under a variety of common names used in the hobby including Green Star Polyps, GSP, Star Polyps, Starburst Polyps, and Daisy Polyps - all of which refer to the same coral species.

GSP is very hardy and tolerant of chemistry swings, it grows really fast, and doesn't require too much flow or light.  It can be placed anywhere in the tank where it has a surface to encrust but can outcompete other corals for real estate, quickly covering rocks and other surfaces in any direction. Often used to fill in empty space in the aquascape because it can quickly fill in a large area of the tank. For this very reason, it's not a bad idea to trim and control the growth or even isolate the coral where it cannot grow over tankmates. 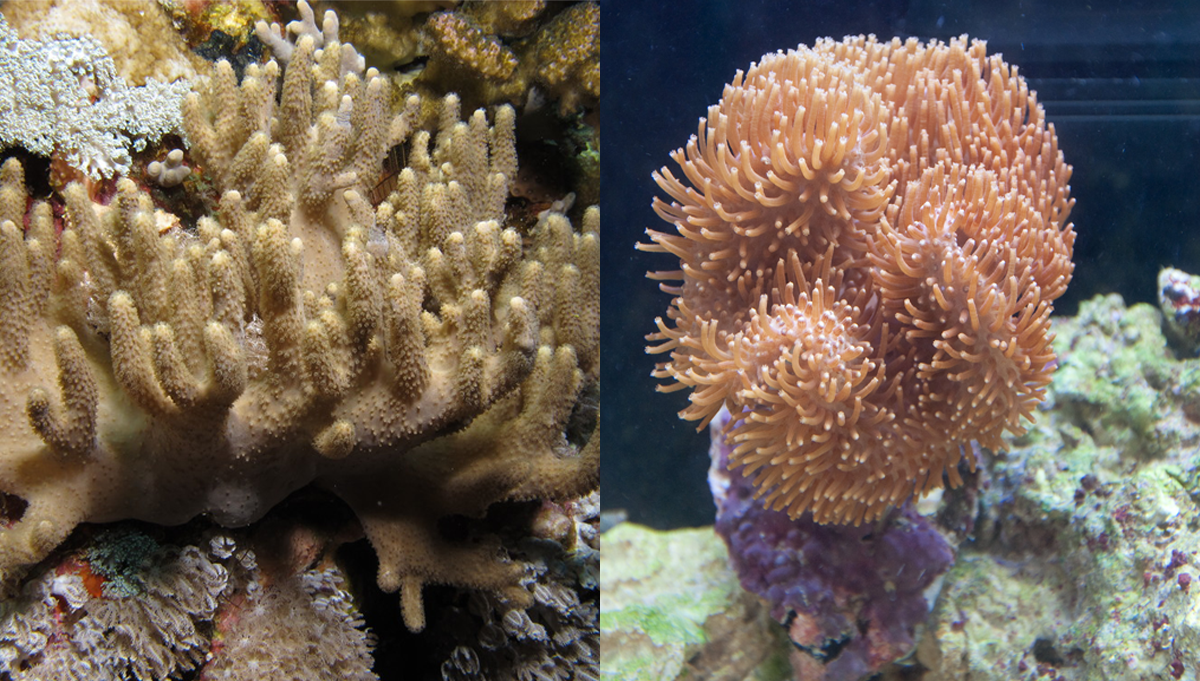 This is a broad genus of corals with a number of unique species to choose from. They are all soft corals with very minor morphological differences and, generally speaking, share the same care requirements in your tank. Common names include Leather Corals, Finger Leather, Toadstool, Lobo Leathers, Sinularia, and Neon Green Nepthea.  Color can vary from brown to green and they can grow quite large in your tank if given the space to thrive.

Leathers are known to be very hardy and will accommodate a variety of water conditions. They are often placed in the lower part of the water column because they typically grow upwards. Many species can grow quite large making them a great centerpiece type of coral. Growth rates will vary from species to species with some growing very fast and others much slower. They also go through cycles where they shed an outer layer of skin/flesh every few months. During these cycles, the coral shrinks up and doesn't appear to be growing but once they shed the skin they will open back up, start growing and expand to full size again. 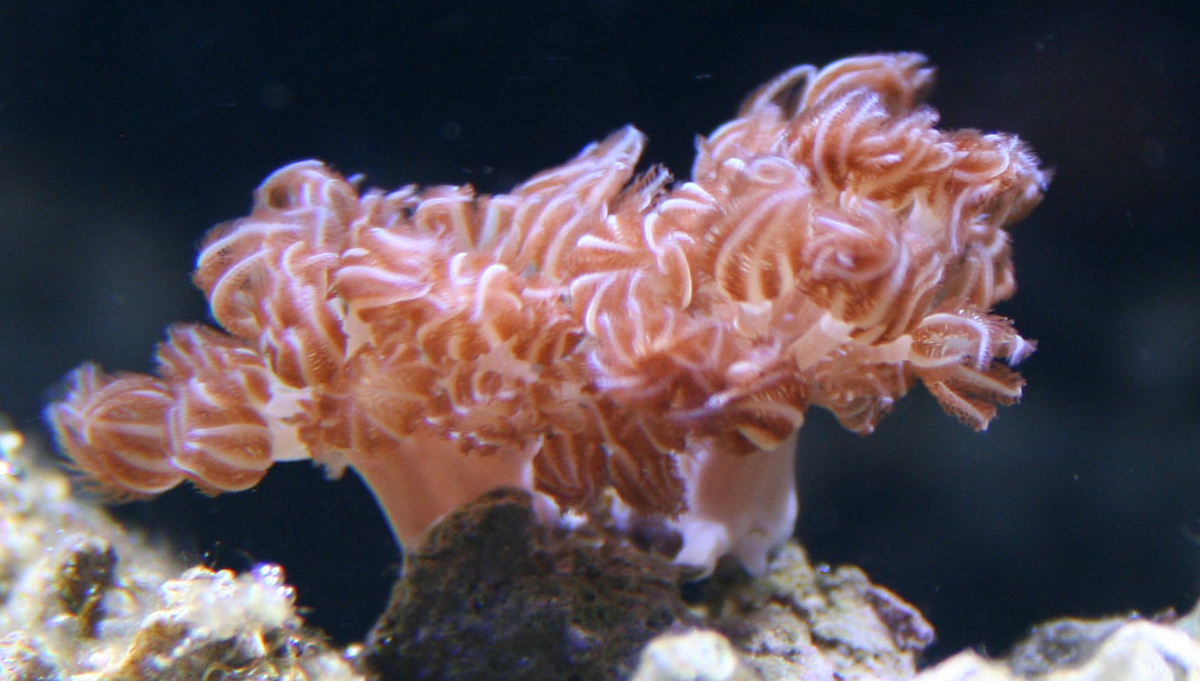 Xenia is technically a genus of soft corals with a handful of species that are popularly found in reef aquariums. Common names include Pom Pom Xenia, Pulsing Xenia, Blue Xenia, and Red Sea Xenia. They are usually light pink/purple, white, grey, or tan in color and grow extremely fast. They have star-shaped polyps on the end of a skinny stalk that sometimes pulse depending on the species which adds unique movement to the tank.

Xenia is somewhat of a polarizing coral because you either love it or hate it. This is because it grows so fast, it will quickly fill your entire aquascape if left to grow. Hobbyists most often isolate Xenia to an island or single rock where it can be easily trimmed and kept separate from the rest of the aquascape. They are very tolerant corals and thrive under a variety of conditions. Most often found in low-medium light aquariums with medium to low water flow. 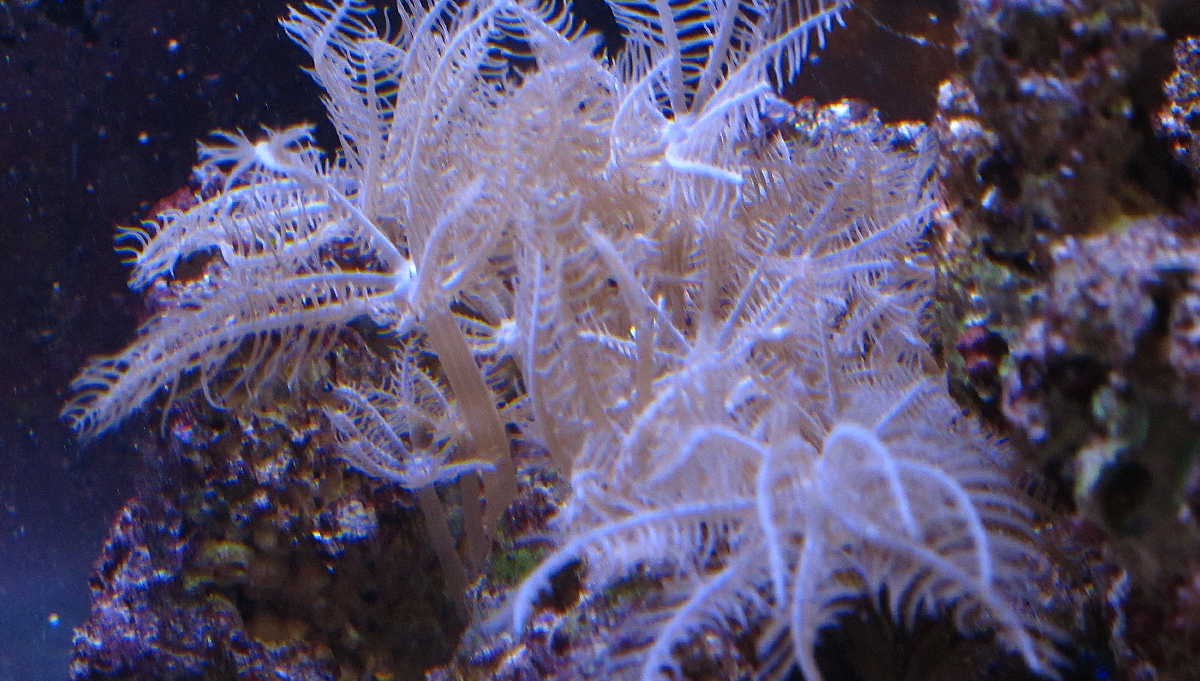 Anthelia is also a genus of soft coral, related to Xenia, that also produces star-shaped polyps on top of a skinny stalk. Waving Hand and Purple or Pink Anthelia are the two common names we see used in the aquarium hobby. They are very fast-growing and look very similar to Xenia but Anthelia can be distinguished by the longer fingers or "petals" of the starflower-shaped polyps.

Anthelia is very popular with new reef tank owners because it is extremely hardy and the stalks of soft tissue gently wave about in the currents creating a very natural "reef" aesthetic. Being a soft coral, low to medium levels of both light and flow will keep this coral happy. 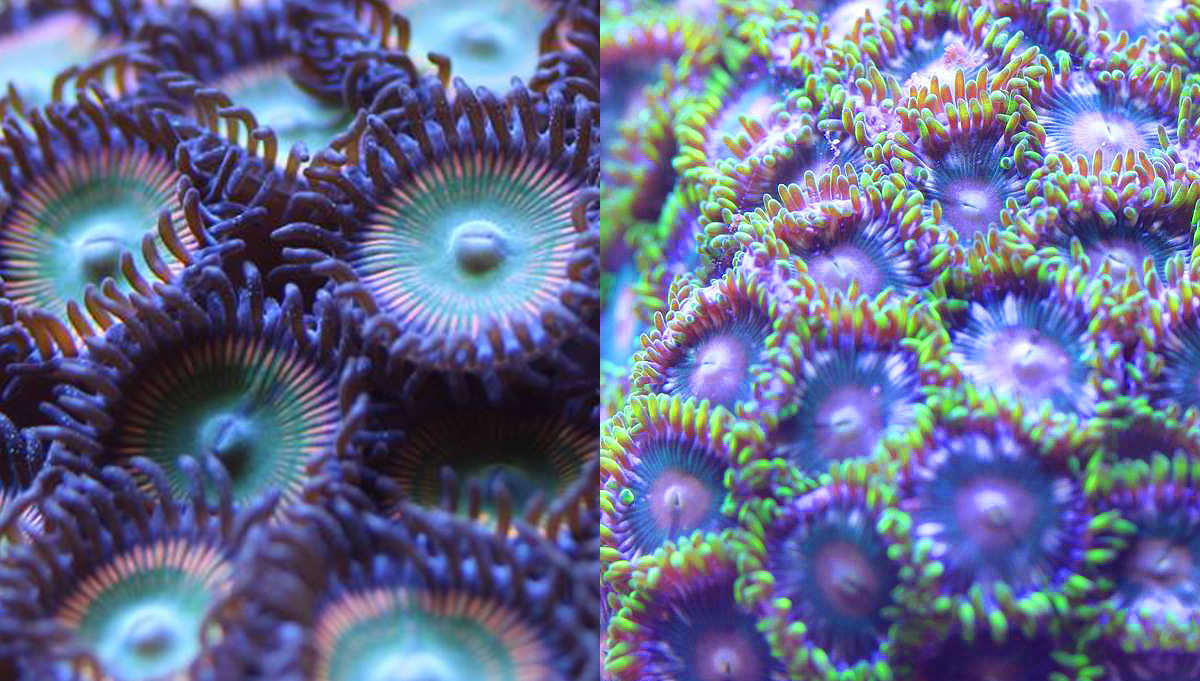 These are two very similar genera of soft coral that offer an incredible variety of colors. The small, multi-colored flower-like polyps grow close together and really add a splash of color to your reef. While there is often confusion between the two, Zoanthids are generally smaller with shorter "skirts" while your Palythoa are often larger with longer "skirts". Taxonomically, they are two different genera within the order of Zoantharia. Hobbyists like to collect different types and plant them close together in a dedicated "zoa garden" which creates an impressive array of colors.

The multitude of color variants also come with some ridiculous common names, too many to list here. If it sounds a little silly or pretentious, it's probably a type of zoa or paly. Prices vary wildly too based on the particular colors and rarity.

Zoas and Palys will survive a wide variety of water and light conditions. Some types tend to grow much faster than others which is dependent both upon the species and environmental conditions. Being an encrusting type of coral, they grow outwards covering the rocks where ample space and light exposure are allowed. 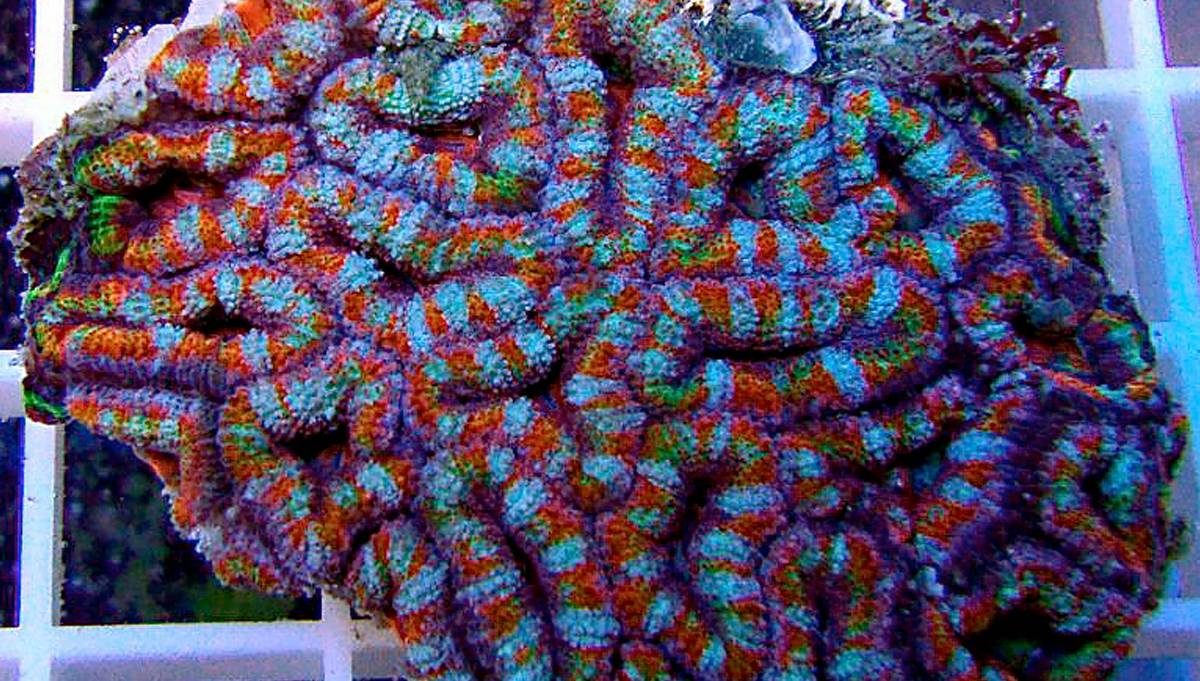 This coral has an interesting story and comes under a few different names including Acan, Acan Lord, Lords, or Micromussa Lords. Back in 2016, scientists reclassified this coral into a new genus, the original classification of acanthastrea lordhowensis is now classified as micromussa lordhowensis. This is why the coral is often labeled as an "Acan" which was the most widely used common name back before the reclassification.

Micromussa Lords are a pretty impressive LPS coral because they come in a striking rainbow of colors, at least 2-3 different colors on a single coral if not more. The colors do vary wildly from mint green and red to vibrant purple, blue, orange, and neon green with the brighter colored frags usually being sold at higher prices.

They are medium to slow-growing corals that extend a fleshy brilliant polyp over the rigid calcareous skeleton they deposit on top of the rocks as they grow.  Medium-light with medium to low flow is the ideal environment and they are quite hardy so long as stable temperature, salinity, pH, alkalinity, and calcium levels are maintained. Like most corals, they do benefit from regular feedings and have small feeder tentacles that protrude out at night or when a feeding response is triggered. 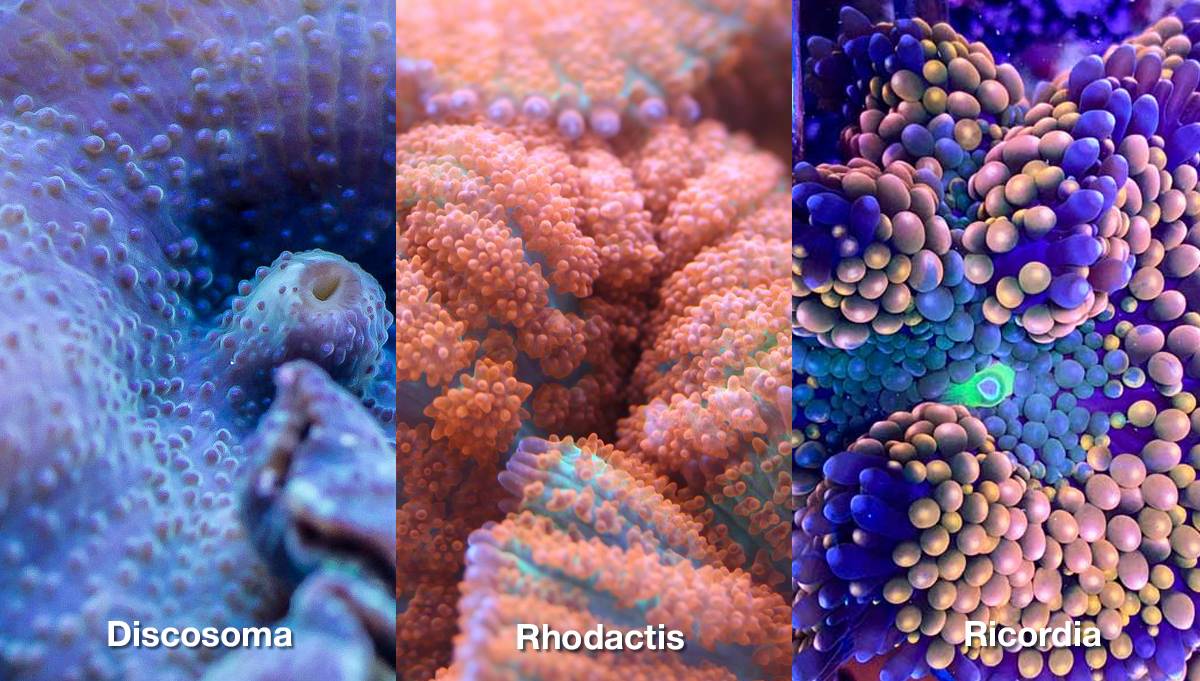 Mushroom corals are a very common beginner coral and there are technically three different types of "shrooms" commonly found in reef tanks. Genus name discosoma, rhodactis, and ricordia. In the hobby, we lump these into the soft coral category because they lack a stony skeleton but are scientifically classified as corallimorphs.

Each of the three different genera presents a variety of unique species, all of which come in some pretty incredible colors. There is a wide range of prices based on the particular rarity and color of the mushroom with the more rare and brighter colored shrooms being more expensive. That said, you can almost always find an affordable mushroom coral of some kind at your local reef shop. Like Zoanthids, the incredible variety of mushrooms means your going to encounter some pretty wild common names which are often chosen based on the rarity and particular color morph.

The Rhodactis and Ricordia species are the most impressive with their bulbous vesicles creating a unique texture but often carry a higher price tag. The discosoma is typically the most affordable genus with the exception of the ever-popular "Jawbreaker" which is one of those holy-grail types of corals reserved for the most serious collector.

Mushrooms are very hardy and prefer lower flow and light conditions in most cases. The growth rate varies among the different species but could be labeled as a medium to slow-growing coral. Some stay small, just 1-2" in diameter, while other species are known to get quite large 6-8+ inches in diameter. They are not incredibly aggressive but can cause harm to other peaceful corals allowed to touch them so it is best to give them some space to grow on their own.

Blastomussa or "Blastos" are LPS corals with two unique species found in the hobby, the blastomussa merletti and blastomussa wellsi. They are most often red, orange, or green in color but there is a range of color morphs on the market that carry different common names such as the "Death Ray" and "Boogie Nights Blasto".

Being an LPS, they do contain a rigid skeleton that they deposit as they grow across the aquascape with a large fleshy polyp extending on top. They look a lot like micromussa corals and carry very similar care requirements with medium to low light and flow conditions. If given the right care and a regular feeding schedule, they can grow impressively fast and create large colonies. They are generally peaceful corals and will be placed in the lower part of the water column away from any aggressive corals or anemones. 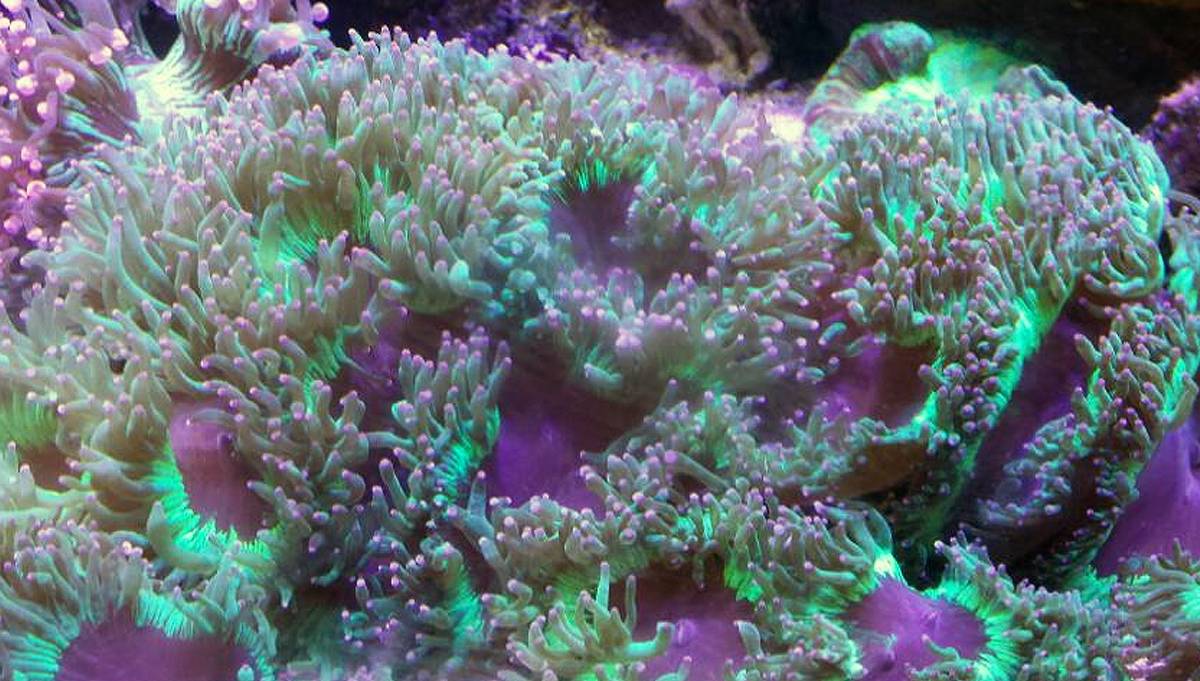 Catalphyllia Jardenei or "Elegance Corals" are large LPS corals that have beautiful long polyps that rim the impressive fleshy polyps. The Elegance coral is pink and green with either white or pink-tipped tentacles.

They are very peaceful corals and are most often placed on the bottom of the tank. They are very slow-growing corals and contain rigid skeleton that sort of fold together as it grows and creates polyps.  Under the right conditions, the polyps will get impressively large and expand out. Low flow is ideal and they will appreciate medium-low lighting conditions as well.

Elegance corals can be a little sensitive and tend to prefer very clean water with low nitrates and phosphates along with stable temperature, pH, salinity, calcium, and alkalinity levels. Among all of the corals on this list, these are probably the most finicky depending on the exact specimen so be sure you are confident in providing stable conditions before trying and Elegance. 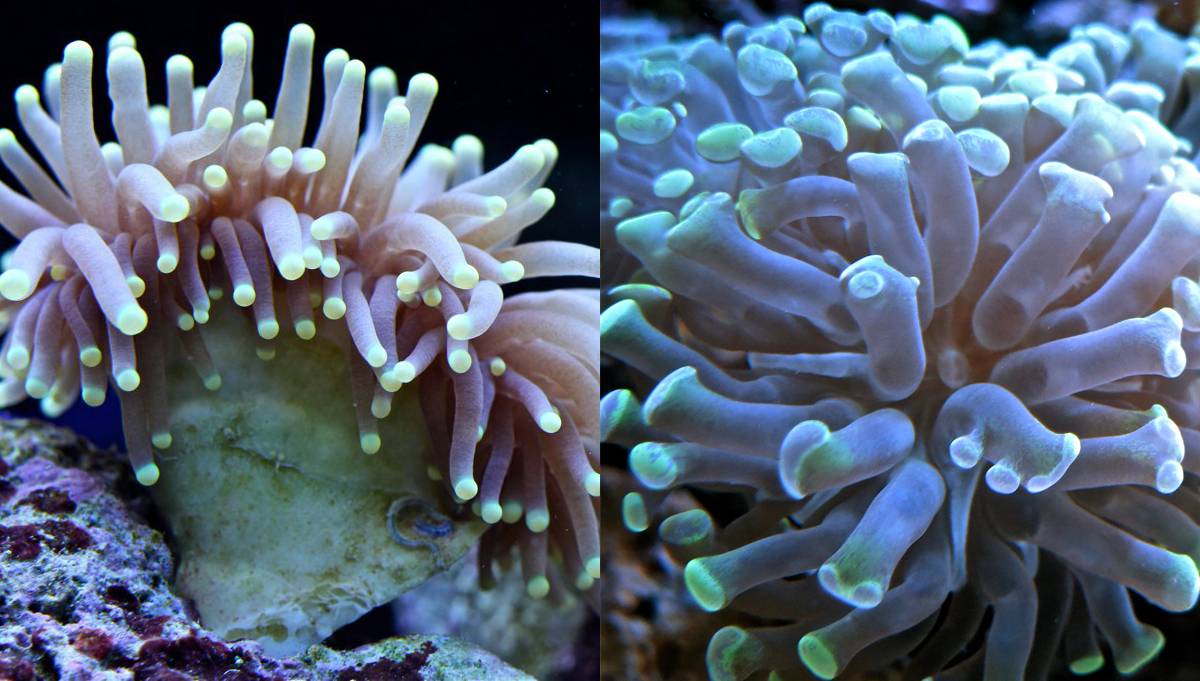 Originally classified under the genus euphyllia, this group includes the popular branching Frogspawn, Torch, and Hammer Corals. With a recent reclassification in 2017, the Hammer and Frogspawn now belong to the Fimbriaphyllia genus while the torch remains the only true Euphyllia. These changes to their scientific taxonomy are still very new and the word "Euphyllia" coral is still used interchangeably to describe all three.

These are some of the coolest looking LPS corals because they have a branching rigid skeleton that sprouts a polyp full of long tentacles. Appearing like something out of a Dr. Seuss book, the long tentacles wave about like an anemone.  Euphyllia corals create that natural motion in your tank that is so iconic for coral reefs as their tentacles move with the current.

Most "euphyllia" corals are pink and green but there is also some brown/orange/gold coloration to be found. There isn't a ton of variety when it comes to color but they sure make up for it with the way they look.  They are pretty slow-growing corals but with that said, they can get large if given the time and space. Medium to low flow and light conditions are preferred with plenty of space to extend the polyps and tentacles. They are sensitive to rapid shifts in water chemistry so be sure you maintain stable parameters.

One thing to note with euphyllia corals is that while you can place euphyllia corals next to each other, they can sometimes be aggressive towards other species of corals. They have long sweeper tentacles that will shoot out and sting competing corals within reach.