Do you really need heat and flow in your saltwater mixing station? - BRStv Investigates 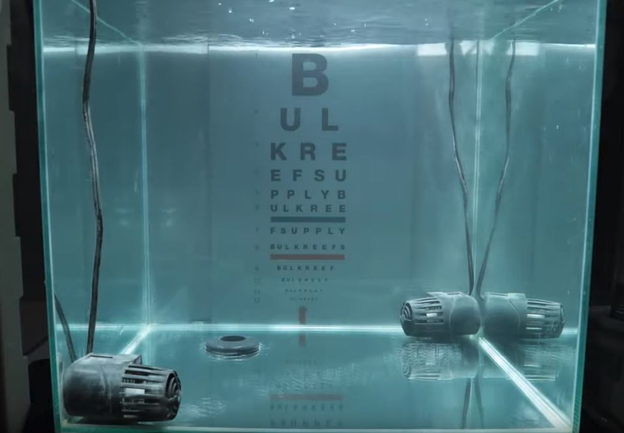 We are still left with some questions about the need to heat and circulate the water during storage so we set out to answer two more questions during our latest experiment.

Much of the anecdotal advice about mixing saltwater is quite confusing when you step back and look at it as a whole. The recommended methods, the amount of time it needs before use and suitable storage practices really don’t paint a clear picture and vary from reefer to reefer.

Since mixing and using synthetic seawater affects 99% of home saltwater aquariums and reef tanks, we set out with hopes of being able to give all of you a concise method for doing this at home. Our research so far leads us to believe that there is certainly a best practice approach. 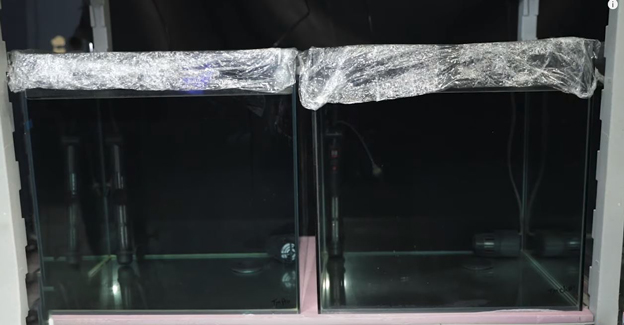 Test #1 - To test whether continuous heat and circulation is required to maintain stable parameters and keep precipitate at bay, we pulled the plug on the heated and circulated storage test which has been mixing at 78 degrees for over 2 weeks. We let that saltwater sit for a couple of weeks with no flow and heat and continued to monitor the calcium and alkalinity levels as well as look for any signs of precipitate or residue forming on the containers.

Test #2 - In order to test the need for heat during initial mixing, we mixed up a brand new batch of salt, one for each of the 8 most popular salt mix brands here at BRS. The batches will be mixed for 48 hours with adequate water circulation but no heater. We can then compare the parameters, clarity and signs of precipitate with our previous findings.

If you have not been following along through our BRS Investigates salt mixing experiments, here are all the video links you need to get caught up! 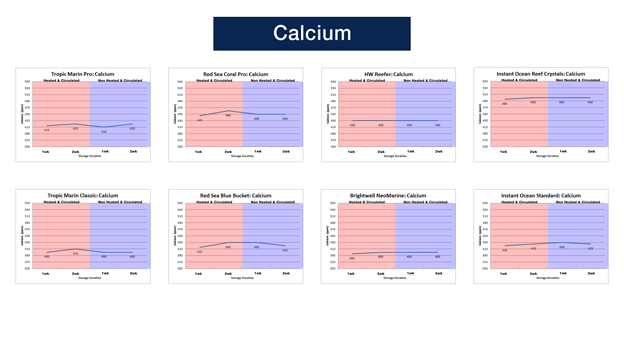 Looking at the Calcium data across the board, we really don’t see much of change in calcium levels compared to storing the saltwater WITH heat and water circulation. Even in the salt mixes with purposefully elevated levels like Red Sea Coral Pro. 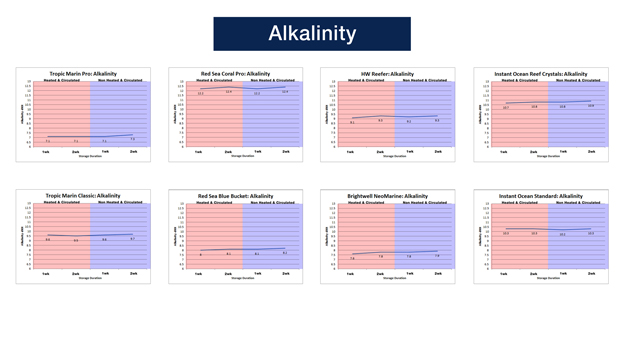 For changes to Alkalinity across all 8 salts, we see a very similar story. All of the salt mixes maintained a fairly stable dKH level after pulling the plug and removing heat and water circulation for an additional two weeks of storage.

Looking at this data overall, we can be fairly confident that after the salt water is fully mixed or homogenized using heat and water circulation, you can then store unheated and uncirculated for at least 4 weeks without causing any major shifts in parameters.

What about precipitate during storage?

To show a visual representation of what these tanks look like after multiple weeks of storage with heat and circulation and then with both of those variables removed, we added a couple of black and white poker chips to the bottom of each tank to help us determine how much (if any) precipitate resulted.

There really is almost no measurable precipitate in any of the test bins and for the couple of mixes that do show a very slight haze, we suspect that to be some sort of insoluble or organic material leftover from the mining or evaporation process as opposed to precipitate.

Moving on to our experiment of mixing the salts for a full 48hrs without heat before turning the pumps off and taking measurements during storage, we did notice considerably more precipitate after the pumps were turned off when compared to mixing with heat and circulation. 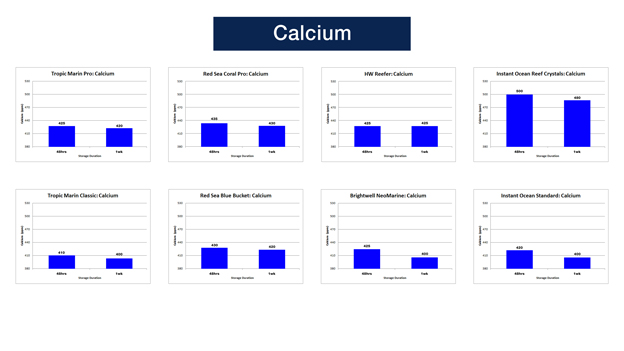 Starting with the calcium levels for the unheated and uncirculated storage test, we don’t see much of a drastic change in parameters from the 48hr point to the 1 week mark; as a majority of the salt mixes remain within our given +/- 10 - 15 parts per million margin of error.

The only noticeable changes worth mentioning are with the precipitate. The HW Reefer brand salt showed a noticeable haze of precipitate or insoluble material on the bottom, much like it performed during our very first test.

Red Sea not only recognizes how elevated levels of Alkalinity and Calcium should behave in a salt mix, but they also provide reefers who use the salts with clearer guidance on how to properly mix the salt. 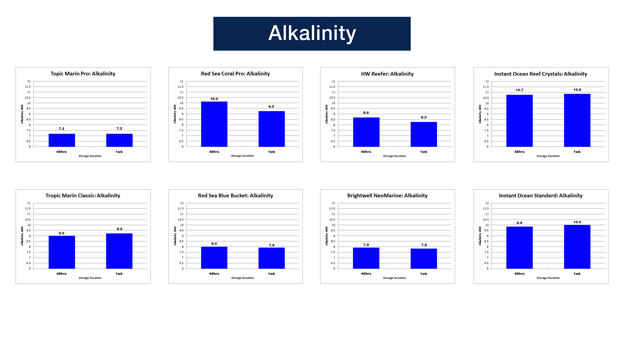 Looking at alkalinity levels our results remained consistent with very minimal changes to alkalinity levels in all of the salt mixes after turning off the heater. The most noticeable change, again, was with Red Sea Coral Pro which dropped almost a full dKH during storage. 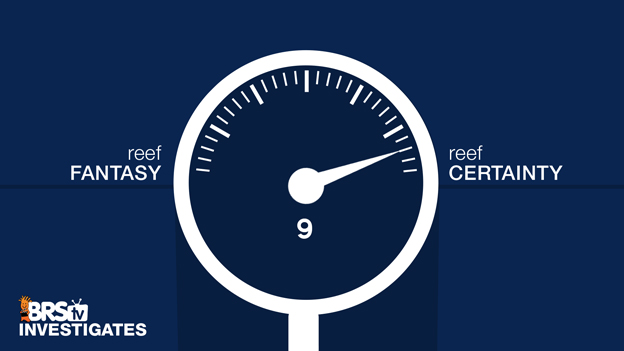 After the saltwater is fully mixed, can you turn off flow and heat then store the water without causing precipitation or major changes to parameters?

We rated this a 9 on the Reef Certainty scale because after comparing results from all of our testing, it seems that after fully dissolving the salt mix, you don’t need heaters and water circulation during storage. 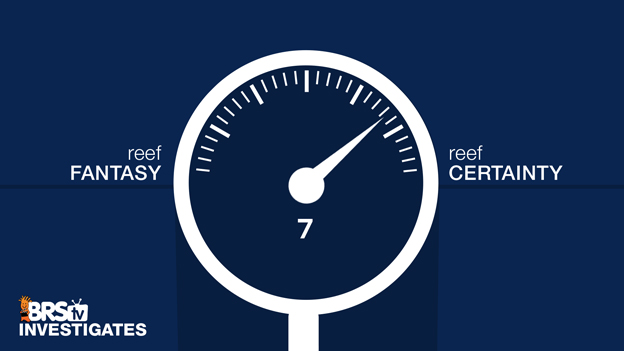 We gave this a 7, leaning towards a Reef Certainty that using a heater during mixing is a good idea for most salt mixes. There are absolutely some salts that showed NO signs of precipitate and NO major changes in parameters when heated and circulated, however, with the heat removed from the equation we saw that familiar white crust on the bottom of the container.

An interesting fact to note is throughout these tests we learned that salt mixes showing little to no signs of precipitation were also some of the same salts that were able to mix fully clear and homogenized within our 24 hour time lapse experiment.

There’s a lot to be said about properly following the manufacturer’s instructions for mixing, specifically in the case of elevated salt mixes.

There are salt choices that mix fully clear in less time than others, some in as little as one hour. So there is an option for those looking to have a fully homogeneous salt mix ready to go in shorter amounts of time.

For the majority of salt mix options, however, letting the water mix for a full 24 - 48 hours using heat and circulation is the best practice.

Storing that fully mixed saltwater and having it on hand at all times is also a perfectly suitable option even when stored without heat or water circulation, so long as the salt mix was properly mixed and dissolved to begin with.