What do we REALLY know about protein skimmers? We’re testing to find out! | BRStv Investigates

Last week we began our BRStv Investigates journey to try and get to the bottom of protein skimmers and find some tangible data that will help you choose the right skimmer for your reef tank. Ideally we can also leverage that data to help you get the best performance out of your skimmer for maximum waste removal and consistent results. 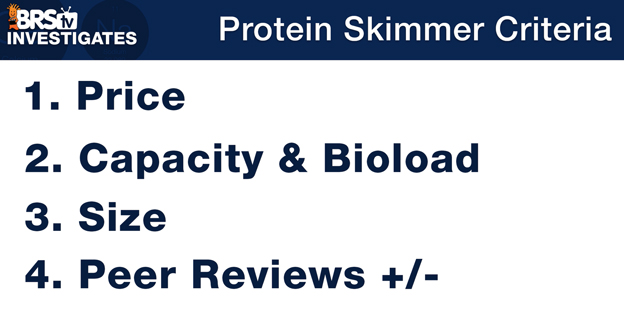 Most hobbyists choose a protein skimmer based on these criteria and only one of those is based on data alone. There has to be more we can learn about skimmers in addition to tank size to help us make a more educated skimmer decision and get the best performance when using a skimmer.

By looking at the relationship between air draw and water depth, we hope to find some congruences in the data that will lead to some usable advice for all of you.

We accept that testing skimmer air draw is a bit boring to watch but there is a method to our madness here. In the last episode we tested the 6 most popular skimmers in the $150 - $250 price range and found that some skimmers are affected by water depth more drastically than others but really couldn’t come up with a concrete bit of advice for use when choosing a skimmer. Simply the fact that yes, water depth matters because air draw changes with water depth but those changes were definitely not parallel among the different brands .


This week we change it up a bit for our second test on the trail of likely a half dozen or more experiments that will ultimately help you get the right tool for the right job. This time the results are a bit more revealing and Randy makes a concrete conclusion about skimmer water depth that will surely help simplify skimmer selection, set-up and operation for the masses. 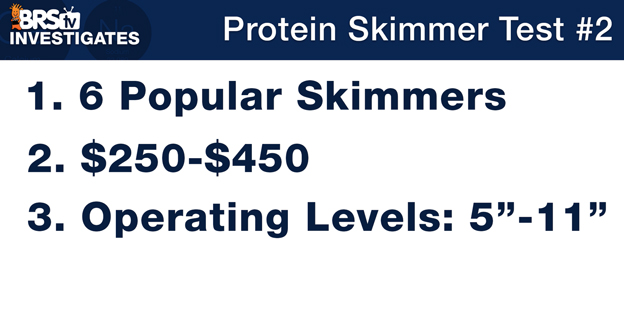 We altered our approach and ignored the manufacturer’s recommended operating depth this time. Using the digital air flow meter from Kelly Pneumatics again we tested the air draw from each skimmer at every inch between 5” and 11” to see just how much the air draw changes on these larger model skimmers with beefier pumps.

Hopefully this wider range of depth paints a more clear image of what exactly happens inside a skimmer when water level changes.

Right away we see pretty stable performance from 5” up to 9” where the overall change in average air draw ranges from 582 liters per hour at the low end to 680 LPH at the high end, where the most air draw is right in between that recommended sweet spot in 7”inches of water.

At 10-11” inches of operating depth, which is pretty deep and not very common in most installs, we weren’t able to collect the air draw data due to the skimmer overflowing into the skimmer collection cup which would make it unusable for any reefer attempting to utilize it effectively at that depth. Note that the best performance came right in that 6-8”inch sweet spot range recommended by Red Sea, where it dropped off on either end.

As we can see from all points of 5” - 9” there’s really not much of a change to the air draw where the lowest comes in at 365 LPH at 7” deep to the highest air draw of 395 LPH 8” of water. The small difference of 30 LPH from the lowest to highest seems to show little concern for operating depth on this skimmer, however, at 10” - 11”inches it did overflow into the skimmer cup to a point that made it unusable at those depths.

Looking at the data from a 5” operating depth to 11”, we see the largest change overall from the lowest to highest air draw happen between 7” to 8” where there’s only a marginal 38 LPH difference from 312 at 7” to 350 at 8”. Again the highest air draw performance is right in that recommended 8” - 9” operating depth range, yet overall the max of around 350 LPH that we tested was pretty far away from the Aquatrance 3000’s rated 880 LPH.


We’ll find out in future tests how much of a role that difference of over 500 LPH air draw effects skimmate production performance, but for now it looks like this skimmer is pretty unaffected by operating depth.

When we look at the performance from 5” - 11” we see a very even air draw rating regardless of operating depth where there’s only a difference of 36 LPH from 425 LPH at 11” deep versus 461 LPH at 7”. From the looks of it in this case it seems as though the optimal range for this skimmer is somewhere in that 6” - 8” depth where we see the highest amount of air draw, which is lower than the recommended operating depth.

Looking at the data across all operating depths from 5” - 11” , this one is by far the most surprising results we’ve seen this far with an overall change of 1,038 LPH. At the highest pump setting we can see that the air draw just continues to increase as the skimmer gets deeper and deeper into the water.


So with Skimz we see the highest performance in terms of air draw, however, it is absolutely affected by operating depth and it does come with the feature of being able to adjust the amount of air draw due to the adjustable speed of the DC pump. I would say that even though the air draw is greater at the 11” depth, I would still install it within the recommended ranges of 7” - 9.5” from Skimz, although if necessary to install it deeper, you could potentially turn down the pump speed.

Looking at the data for this skimmer we see a pretty stable air draw from 5” - 8” with surprisingly the highest amount of air draw is in that lower 5” operating depth at 220LPH. From the 5” depth to that 8” recommended sweet spot we see a majority of the highest air draw. It starts to drop off in higher operating depths until the 11” mark where we couldn’t keep the cup from overflowing.


From the looks of it, I’d say that this skimmer has a wider sweet spot than is listed in the instructions, with a more usable range of around 4”. 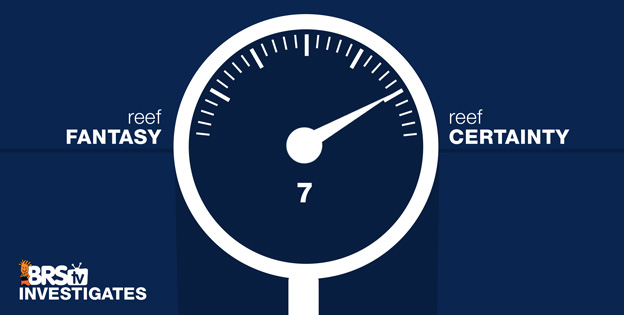 This one gets a 7 out of 10 on the reef fantasy scale for the main reason that the larger skimmers we tested today showed a trending better performance right in that operating range that manufacturers recommend. In almost all cases it is best practice to follow those recommendations as closely as possible.

So much like we saw in the last skimmer air draw test, some skimmers absolutely have more air draw than others, however, it looks as though these larger models with higher wattage pumps are less susceptible to drastic changes at various operating depths. One thing I’d also note is that each of the skimmers we tested today are what’s commonly referred to as Space Saving models with their respective pumps housed inside the body.


The Skimz DC pump did wind up drawing the most air out of the bunch today with deeper operating depths seeming better, yet it was a pretty drastic swing from the low end to the high which may be a result of the changing DC pump speeds. Perhaps changing pump speed at various depths could be something we explore further in future tests.


In the next evolution of our skimmer testing we’re going to take a closer look at how performance is affected with recirculating skimmers that utilize a dedicated pump for the sole purpose of drawing in air and a second pump to feed water through the skimmer. We suspect some more conclusions can be drawn around this dual pump approach.