What kind of tank is the A500X Good For?

Kessil designed the A500X using their latest dense matrix LED technology to perform similarly to a single 400 watt metal halide lamp. At double the wattage (185 Watts) of their A360X series lights, it can be mounted much higher off the water's surface and provide a reasonably even spread of light over a 24"-36" area that penetrates deep.

The A500X shines where most all other reef tank lighting options fail, delivering usable PAR in tanks that measure up to 48" deep! It will create a high-contrast type environment in busy tanks with large colonies of coral and intricate rockscapes like you get with an NSA - Negative Space Aquascape. Really accentuating those bright and dark areas to create a sense of depth and very natural appearance with that classic Kessil shimmer.

The beauty of having a heavy-hitting adjustable output LED is you can tune the light to support any type of corals - SPS, LPS/Softies, or even a mixed reef. In line with our PAR tests of days past, we took the same averages measuring at the top, middle, and bottom of our 24" x 24" test tank. The goal is and always has been for 70% of these data points to hit within the required PAR range for the desired tank type. This will effectively tell us whether or not the light can cover a majority (70% or more) of the tank with a usable amount of PAR.

Tuned to our BRS Custom Spectrum (defined below) at 100% output, we hit roughly 69% of the desired 70% coverage. That is 69% of the data points measured somewhere between 200-350 PAR as required by SPS corals. Pretty darn close and ultimately great performance. The light most certainly is capable of supplying the output for SPS corals as we all might have expected.

Of course, if the light can hit numbers for SPS then it's logical to assume that it is more than capable of handling a LPS dominate tank with the right tuning. In this case, we used the same BRS Custom Spectrum tuned down to 30% output. What do you know, the light hit a whopping 85% of the data points within the 75 -150 PAR range required by LPS corals.

This is where we look at the distribution of light and find the optimal mounting height combined with any lens or reflector options. The A500X is very flexible in this area as it comes standard with a very wide-angle 130° reflector and can then be retrofitted with either a 55° or 35° reflector to focus that output, specifically for deeper aquariums and to accommodate various mounting requirements.

Ultimately our test is designed to find the mounting height where you're getting an even spread over that same 24" x 24 area without losing more than 15% of the output out the sides of the tank. A little light spill (15%) is often acceptable for most reef tank lighting situations, especially with modern rimless tanks. 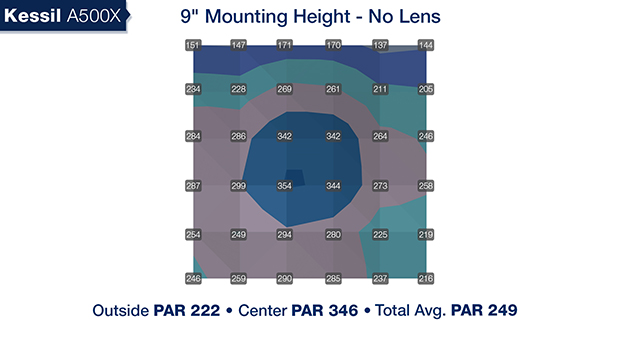 With the native wide angle 130° reflector you can mount it as close as 9" to the water's surface without creating a terrible hotspot in the middle of the tank. This is impressive because Kessil is one of very few LED lights that can be mounted that close to the water without a noticeable hotspot. As specified by Kessil, this is the best option for tanks up to 24" deep. 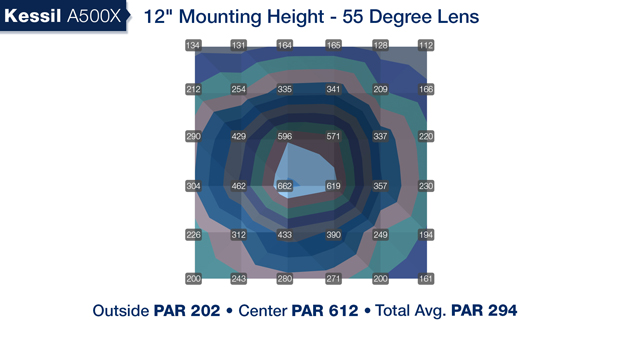 With the included 55° reflector attachment, you can raise the light up as high as 12+" from the water's surface and still get a usuable spread and not lose more than 15% of your output. This is great for those that require a higher mounting level and need to penetrate as deep as 36". 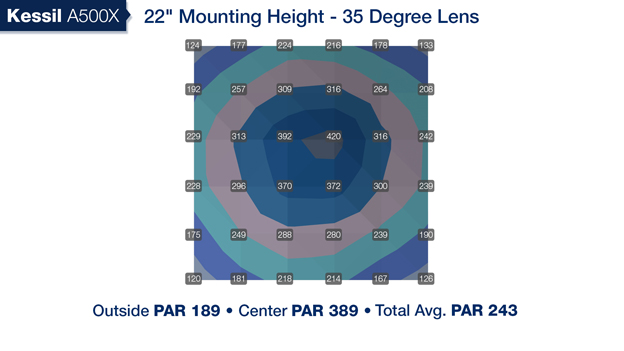 Finally, the most narrow reflector option (sold separately) which is 35° and was made for really deep tanks, up to 48" deep per Kessil. You can mount the light as high up as 24" from the water's surface without losing a considerable amount of PAR using this reflector option.

This is a new test for BRStv Investigates and designed to show you what kind of appearance you can expect in the tank. In the photography world, this is often referred to as "Hard light vs Soft Light". How well does that light wrap around the subject? Will it create a distinct shadow or does it eliminate that shadowing effect altogether?

An 8 bulb T5 fixture mounted over a standard 120-gallon tank, 24" x 48"x 24" is our reference for soft light on the right in the image above. A low contrast appearance in the aquarium where the shadows are reduced and almost eliminated because the light is entering the tank from many angles. Note the white bottom with only a few soft, very small shadows.

Two A500X lights mounted 9" above the same aquascape create a very different appearance on the left. A hard light, high contrast appearance with more shadows. Note the more severe shadowing among the aquascape and clearly defined shadows being cast on the bottom of the tank. This is to be expected from a single point source light as all of the light output is coming from a single source, hitting the subjects from one angle and creating shadows. 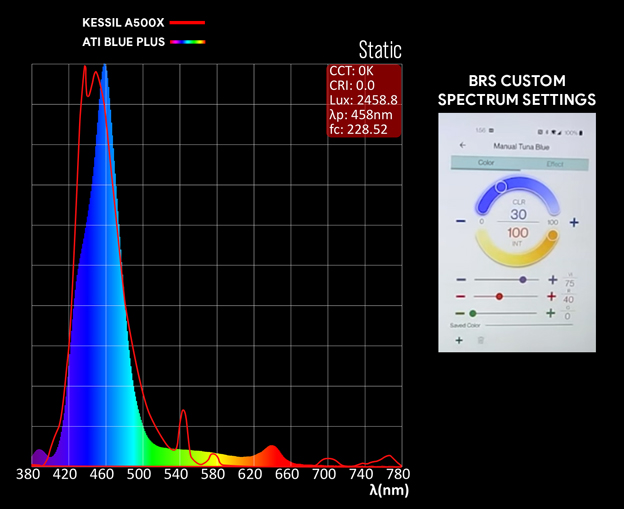 We created our BRS Custom Spectrum to match the all-time gold standard we use in all of our spectrum tests, the ATI Blue Plus. We made some minor adjustments and you can see the settings for our BRS Custom A500X spectrum on the right.

Kessil is one of the first LED light manufacturers to fully take control of spectrum and produce a light that not only eliminates much of risk for you, they also blend the color together very successfully as proven using a Spectrometer. You can run with the BRS Custom pictured above or tune it to your liking without risking the health of your corals because Kessil locks in the spectrum to always provide the optimal blend for photosynthesis.

simply turn the color dial until you like what you see and adjust the intensity dial to hit your PAR numbers. The Red, Green, and Violet channels are simply supplements and will only have a minor effect on color rendition in your tank. 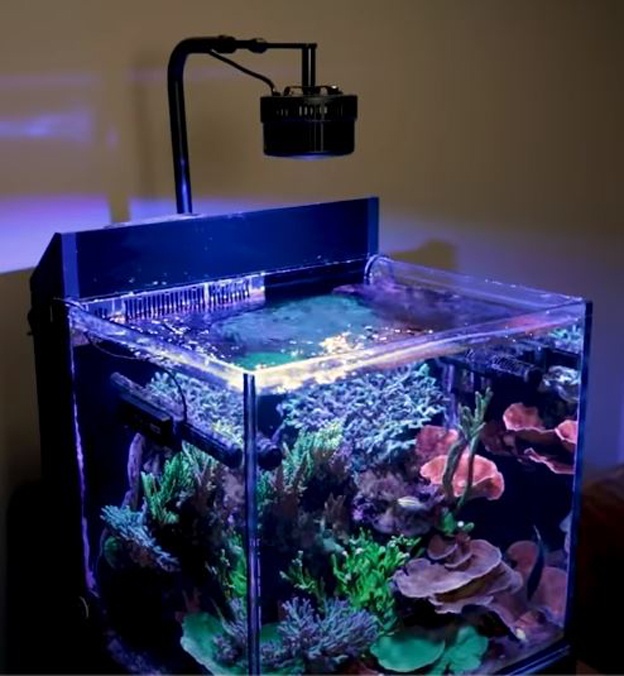 Starting with the way it looks in your tank, both shimmer and color rendering are very successful with the Kessil LEDs. Kessil has been the most successful reef tank LED light manufacturer in the way of creating an exaggerated yet natural shimmer effect with well-blended light. This is subjective, some hobbyists like the shimmer and some hobbyists do not, none the less the X Series Kessil LEDs supply a very pronounced shimmer effect. This is why someone might choose to use a diffusion lens or add some soft light supplements like T5 bulbs, both of which help to mute that shimmer. 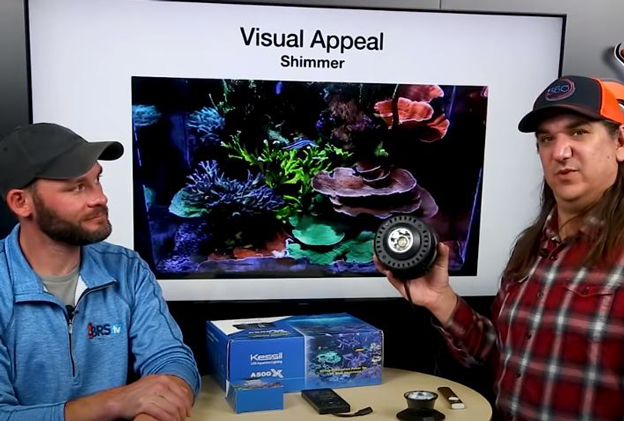 While this is difficult to capture via a digital image, color rendering is the ability of the light to accurately render colors of the colors and fish. The A500X shown over the SPS dominant ULM tank renders all of the colors successfully. There is no imbalance or dominance of one color over the others. 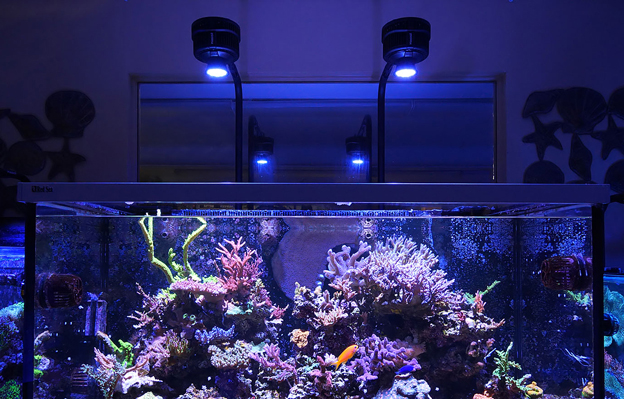 The general form and function of the light itself, accessories, and mounting options are all somewhat subjective so your own opinion and limitations matter. Kessil pendants are small making them easy to mount and generally provide a very contemporary-looking tank when used over a rimless glass aquarium. We prefer the rigid arm style mounts for stability, especially with the larger A360X and A500X pendants but you do have a flex arm and suspension mount options from Kessil as well.

For control, the same Kessil Spectral Controller X or Wifi Dongle used with the A360X is compatible. The Kessil Spectral Controller is hard-lined why your Wifi dongle gives you that wireless control via an app on your smartphone. In either case you can create schedules and tune the output to your liking. Both are sold separately but the good news is you only need one to control your entire bank of Kessil lights no matter which route you take.