In terms of how to cure live rock, there are three main methods used by hobbyists: natural, bleach and acid. Our focus today is using the natural method and we answer three direct questions:

Curing naturally is done pretty much exactly as it sounds by simply dropping and soaking live rock in a suitable container, typically without light, and waiting for the undesirable organic material to decay. Over time, dead algae and other organics on the rock will fall off and break down naturally, leaving behind rock that is free of organics and fairly clean. 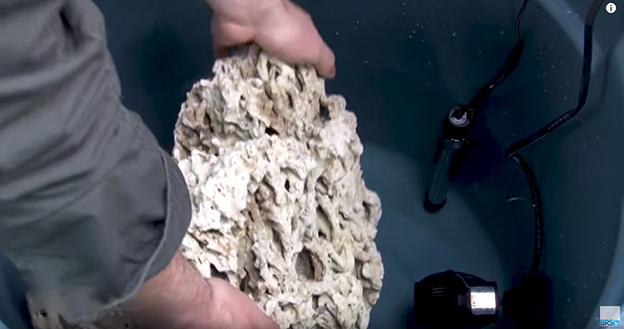 A natural cure is the easiest method of cleaning or curing live rock and when done right, it can also help speed-up the cycle time because you do not need to deal with large amounts of die-off and the resulting nutrient spikes when cycling your display tank. 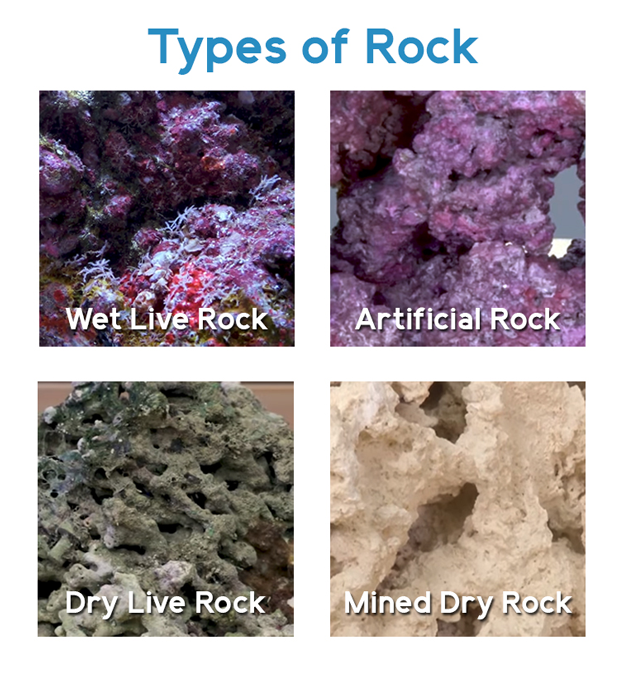 Knowing what type of live rock you have is important to determine if you need to cure the rock. Live rock that is available to modern hobbyists can be grouped into four different categories: wet live rock, dry rock from the ocean or a previous tank, mined dry rock, and artificial man-made dry rock. 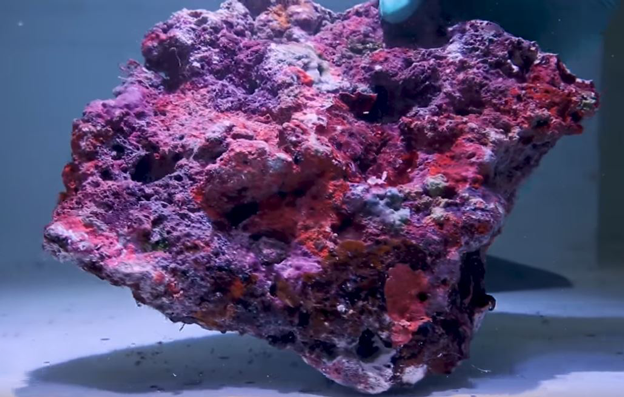 If you spent the money to buy wet live rock, which is getting increasingly rare and expensive, than you probably desire the natural bacteria, Coralline Algae, microfauna, sponges and other organisms that come living on the rock. If you decide to cure it, some of this life will die off especially without light and a food source.

For this reason, most hobbyists will not cure wet live rock to get the most benefit out of wet, living rock that is full of beneficial bacteria, small organisms and algae.

Can you cure wet rock with light and food source additions? You can, but at that point your more or less just running a reef tank in a bucket and not really removing potential pests and pollutants.

Some reefers will buy wet live rock and cure it using heated and circulated water but no light. Many of those hitch hiking organisms and potential pollutants will not survive this process and it is arguably one of the most stable ways to start a reef tank with a diverse bacterial culture, no hidden organic pollutants and minimal pests.

Our suggestion for most reefers who paid for wet live rock and want to retain the desirable characteristics like coralline algae coverage is just skip curing the rock and move on to cycling it in the tank. So long as there is not a ton of obvious die off that needs to be dealt with, this is the best approach and may just take a bit more time for a proper cycle.

Organisms that don’t survive in the tank will break down and be removed via filtration or water changes. Utilitarian fish and clean-up crew animals will also help keep things clean during this in-tank cure/cycle process. The result will be most of the life you paid for on the rock stays alive but you run the risk of introducing pests and parasites. 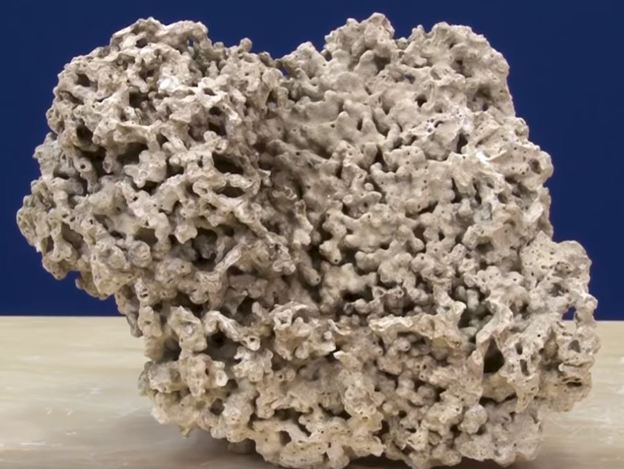 If you picked up dry live rock that originally came from the ocean or used rock from another tank that has been allowed to dry out, curing the rock is critical to your success.

Rock from the ocean or rock previously used in a mature tank will have all kinds of dead organic material on it. If not removed via a cure, it will yellow the water, smell terrible and add considerable nitrate and phosphates, all of which will cause almost unmanageable problems when starting a new tank.

So the answer is, if it was alive at some point and you can physically see evidence of things growing on it or living in it, you need to cure it before cycling your tank. 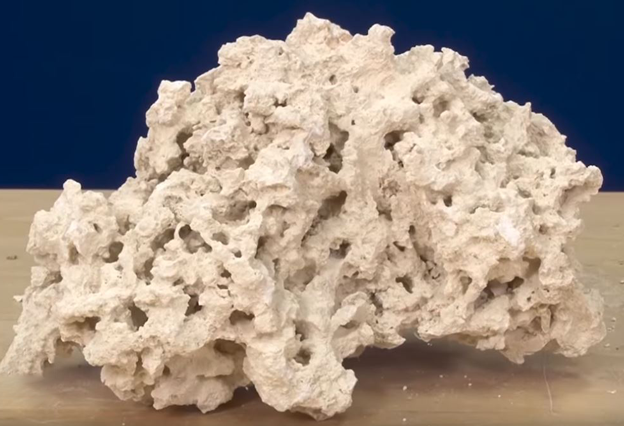 This is by far the most common rock used these days because it is cheap and readily available with our most popular option being the Marco Rocks Reef Saver. Mined rock is basically a million year old calcium carbonate reef rock that has all these cool holes and crevices created by low ph aquifers in the ground. This rock was at one time, the foundation of ancient reefs.

In all our tests, we have never been able to detect leaching organics from dry mined rock via nitrate and phosphate testing.

Do not bother with a prolonged natural cure time because it is probably a waste of your time. We do recommend, however, that you soak the rock for a week or so in freshwater to loosen up any debris and clean it. 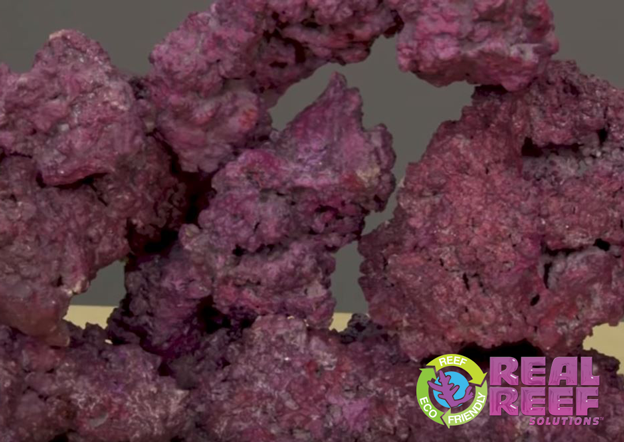 Artificial man-made dry rock such as the very popular Real Reef brand that we used in the BRS160 is favored because it starts purple and will look like an established tank much quicker.

With most artificial dry rocks, we recommend soaking in saltwater for a prolonged period of time (4-12 weeks) to remove anything leftover from the manufacturing process.

In the case of the Real Reef Rock, while somewhat damp and not technically dry, it shares many of the common curing practices of clean organic-free types of artificial dry rock and are often grouped together.

Real Reef clearly states their rock is allowed to cure in freshwater for a minimum of 12 weeks before being transferred into a bin of saltwater for another 12-16 weeks before ever being packaged. In this case, do not be concerned about organics or curing and just get a bucket of saltwater to give each piece a quick rinse before putting it in your tank to cycle.

Moral of the story is unless otherwise noted by the manufacturer, give your artificial man-made rock a good soak before going into your tank for cycling.

How to Naturally Cure Live Rock

The natural curing process is remarkably simple, you are just going to soak the rock for 4-12 weeks in saltwater with no light until all the organics break down.

It can be done in almost any reef safe container ranging from the aquarium itself to a rubbermaid brute trash can to something like a horse trough. If you plan to mix saltwater at home, consider getting a large open top water container which, after the curing process, can be used to mix and store saltwater. 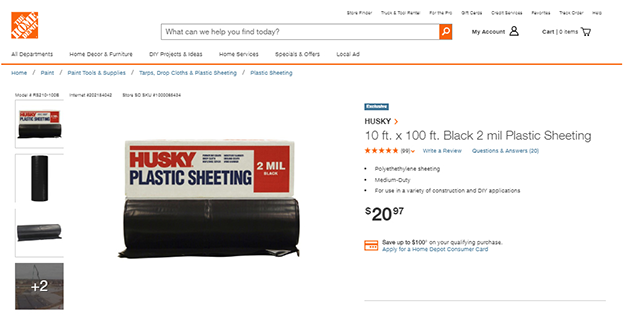 The only real important part is you find a way to completely black out your container. A lid is best but you can also use thick black plastic sheeting from your local hardware store, just be sure to not let it touch the water itself so as not to contaminate it.

A complete black out is required because you need to eliminate as many photosynthetic algae and bacterial pests related to new tanks as possible. It is, however, important that the container is not hermetically (air tight) sealed because some amount of gas exchange is required.

Fill the container with saltwater and add the rock. Soaking should be completely done within 12 weeks and will then be ready for your tank.

Speed It Up - How to Reduce Total Curing Time

Add Flow - Using an inexpensive powerhead or water pump to circulate the water inside your container will help the bacteria proliferate and do their job of breaking down organics faster. The water movement will also help to break up and flush away debris that would otherwise settle or stay attached to the rock and break down much slower.

Add Heat - Using an aquarium heater, maintain the water temperature around 78 degrees or near your desired tank temperature. Bacteria will reproduce and populate the curing bin much faster at higher temperatures and will help reduce the total time required for curing.

Add Bacteria - Instead of waiting patiently for mother nature to run its course, add the bacteria yourself and boost the specific strains that are ideal for the intended purpose of breaking down organic debris. 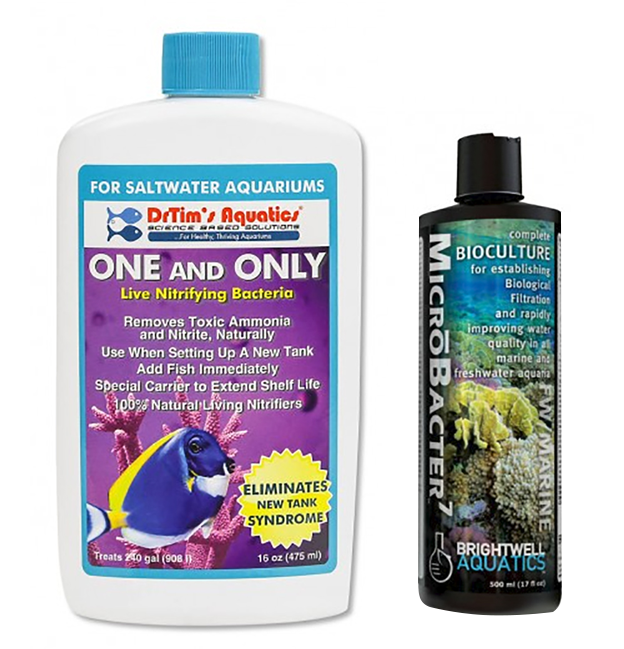 Dr. Tim’s One and Only as well as Brightwell’s Microbactor 7 are excellent bacteria additives for cycling a tank. But you are curing your rock, not cycling. Instead, us a more appropriate additive for curing that contains aggressive strains of bacteria. 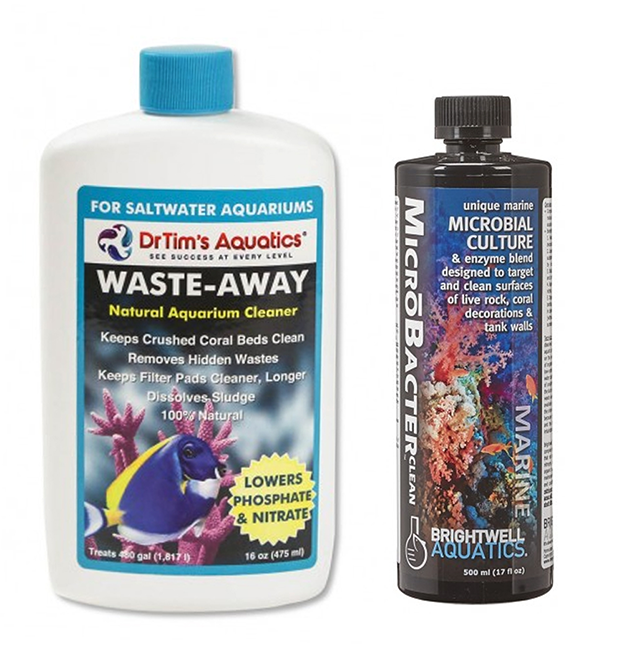 Dr. Tim’s Waste Away or Brightwell’s MicroBacter Clean are specifically geared for this process and contain these aggressive scavenging type bacteria strains.

In the case of MicroBacter Clean, it literally says "microbial culture and enzyme blend designed to clean surfaces of live rock". MicroBacter Clean also contains dormant bacteria which are more stable and less susceptible to shipping and weather conditions than live versions of a similar product.

Using the right tool for the job will absolutely show in the results. In this case, well circulated and heated salt water with a bacterial boost specific to the intended use will help considerably both in effectiveness of the cure and how quickly it happens. 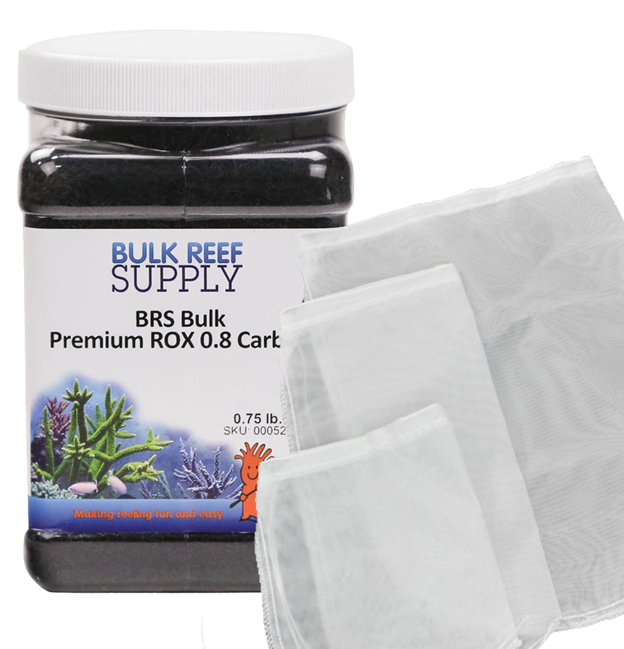 Soaking a bag of activated carbon is also a smart move to help cut down on foul odors that result from organic material being broken down by bacteria.

The best way to tell when the rock is done curing is by performing multiple tests for nitrate and phosphate. Initially, these parameters will spike quite high and then plateau. Once they stop rising and hit this plateau, you can be confident the rock is cured. If you want to be certain, do a 100% water change and test again; the phosphate and nitrate should be zero after the water change.

Watch Video: How much rock do I need for my tank using Reef Saver rock per gallon?

Recent Posts
What Causes Cloudy Aquarium Water and How to Fix It
Ep: 10 How to Take Everything We Learned From the Biome Cycle Experiment & Change the Future of Reefing!
Ep: 8 Biome Cycle Phase 2...Which of the 12 Test Aquariums Will Beat ALL of the Uglies?
Ep: 7 Best Biome Cycle? Aquaforest Life Source vs. Real Reef vs. Gulf Rock vs. MarinePure Brick
Ep: 6 Best Biome Cycle? Insta-Coral vs. Aquarium Rock vs. Dark Rubble vs. 100% Water From the BRS160
Biological Filter Media - Improve Nitrification, Prevent Nuisance Algae, and Stop Pests!