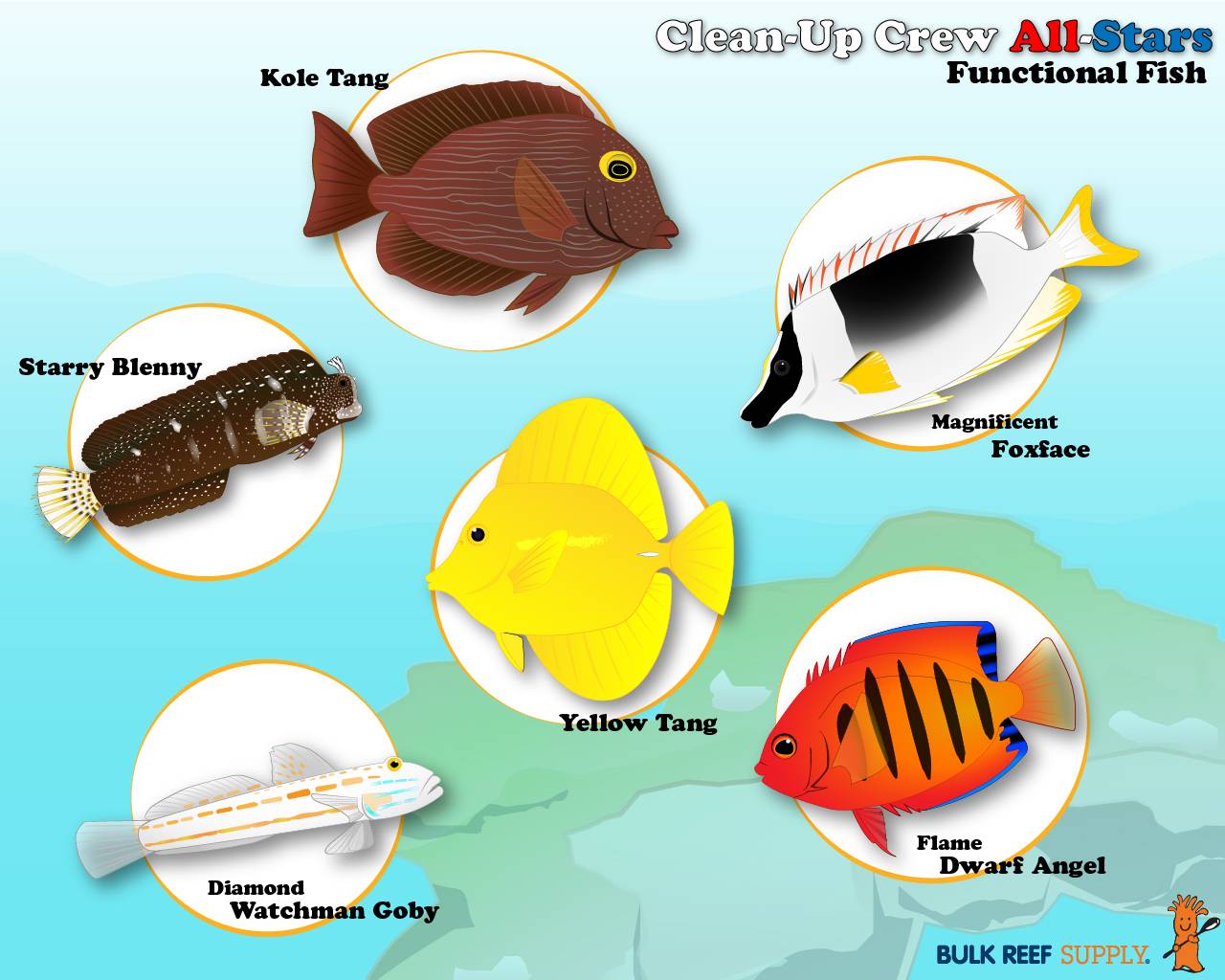 Having an assorted cleanup crew of invertebrates for your saltwater or reef aquarium will help keep your rock work and substrate clean. There are also some awesome fish that can be employed to keep the tank tidy alongside your classic CUC. We typically refer to these fish as "utilitarian" or functional fish because they play a vital role in keeping the tank clean and consuming algae and waste.

Starry, Sailfin (AKA Lawnmower), Bicolor, and a variety of other "comb-tooth" blennies can add character to any aquarium while also playing a part in algae control.  Throughout the day they will graze on algae growing on the rocks and glass panels of the aquarium. They have quite the personality in your aquarium too, perching on rock outcroppings in between meals and sometimes pestering their tankmates who encroach on their territory. They are also known for jumping, so we would suggest having a lid on the aquarium if kept.

While most Blennies won't cause a problem in your reef tank, they can be aggressive toward other fish that attempt to graze on the rocks, especially other blennies. It's best to keep one per tank to avoid this aggression. Outside of that, they make great members of a peaceful community reef tank.

There is a wide variety of Centropyge species available to aquarists. These "Dwarf Angelfish" include fish like the Cherub, Coral Beauty, Flameback, Lemonpeel, and Potter’s Dwarf Angel. All centropyge species can serve as an effective means to control macroalgae. While they are not commonly thought of as "utilitarian fish" they can certainly be helpful if macroalgae start to encroach on your display.

They are omnivores and some species have been known to eat coral polyps so you should proceed with caution if you're keeping a reef tank.  Captive-bred fish dwarf angels are on the rise too and will make far better tankmates compared to wild-caught angels because they are less likely to eat corals and will simply be better adapted to life in an aquarium.

They do require lots of hiding places and can be sensitive to stress. They should not be housed alongside other dwarf angelfish and can show aggression toward tankmates over territory and competition for food.  Well-established aquariums over 40 gallons are recommended to help reduce stress and keep these fish happy.

Sandsifting Gobies can help keep the substrate clean by the mouthful. Diamond head, Twin Spot, and Tiger Watchmen gobies spend their day sifting through live sand looking for tasty crustaceans to eat. This helps keep the sand oxygenated, free of algae and releases detritus into the water column to be filtered out.

You should have a sand bed of at least 2-3" in depth throughout the tank with rubble and rock work for them to make a burrow.  They can make a mess of the sand, constantly rearranging it and covering any unsuspecting coral frags so they are not the greatest addition for smaller tanks under 30 gallons. They are generally peaceful towards tankmates but may show aggression toward other gobies.

You do need to be sure and supplement their diet with meaty bits of frozen food and they will accept prepared aquarium foods once adapted to life in the tank.  They only feed on the bottom so it's best to train them via spot feeding to ensure they get plenty to eat.

Rabbitfish have an appetite for algae while providing a dash of color to larger aquariums. Their small mouths pick and rip algae from liverock, but should be provided seaweed sheets to ensure they are getting enough to eat. Herbivore formulated pellet and frozen foods are also a good idea to keep Foxface and Rabbitfish healthy.

Caution should be taken when handling these fish because their spines are slightly venomous and they will be used if provoked. Rabbitfish get large, up to 8" long, so keeping them in tanks over 70 gallons is recommended to ensure a long happy life in your aquarium.  They are very peaceful but should not be housed with other Foxface species and may nip at corals if they are not well fed.

Surgeonfish, Doctor fish, Tangs, whatever you want to call them, these fish come in a variety of shapes, sizes, and colors and are among the most popular saltwater aquarium fish.  They are known for grazing, nipping, and plucking algae off liverock and glass but also accept meaty morsels of food. Tangs need to be provided with seaweed sheets and other herbivorous snacks to round out their diet in an aquarium even though they will likely eat anything within reach.

Tangs are generally precocious fish and love to swim quickly about the tank grazing on algae. They can show aggression towards other tangs but will get along with most other peaceful tankmates.  They do grow quite large too so tanks over 70 gallons in size are best.  They have a sharp "scalpal" that grows at the base of their tail which is how they get their name so be sure to handle them with care. That scalpal is sharp and can leave a mark if you get too close.