So many choices, so much temptation. How do you choose which fish would love your nano tank?

I have had the privilege of having a small variety of nano fish species in my tank. Size and looks are not the only consideration when choosing fish. Diet, compatibility and personality are equally important.

This article will focus more on the personality and diet of just a few nano fish varieties rather than a size per-gallon or number of fish per-gallon rule.

Probably the most recognized fish and the one found in most marine tanks, the clownfish is both amazing and a jerk. They will bully other inhabitants, even attack your hand but will always be constantly swimming about and drawing your attention with their antics. They spawn in the home aquarium if they are paired with an appropriate sized mate. They are easy to care for and will readily eat anything you throw at them. They form pairs naturally although it is not necessary to keep a pair. Their host of choice in the wild is an anemone and they share a symbiotic relatonship with anemones, but in the home aquarium they have been known to favor everything from zoanthids to overflow boxes. Not all clownfish are created equal however; Maroons, for example, get big and are mean. Available in a variety of colors and patterns, there is a clownfish for every budget. Clownfish are actually Damselfish, other species of this family are often considered bullies also, with a few exceptions like Springeri's. Many hobbyists cycle a new tank with a damselfish but this is an outdated method not to mention cruel to the poor fish. 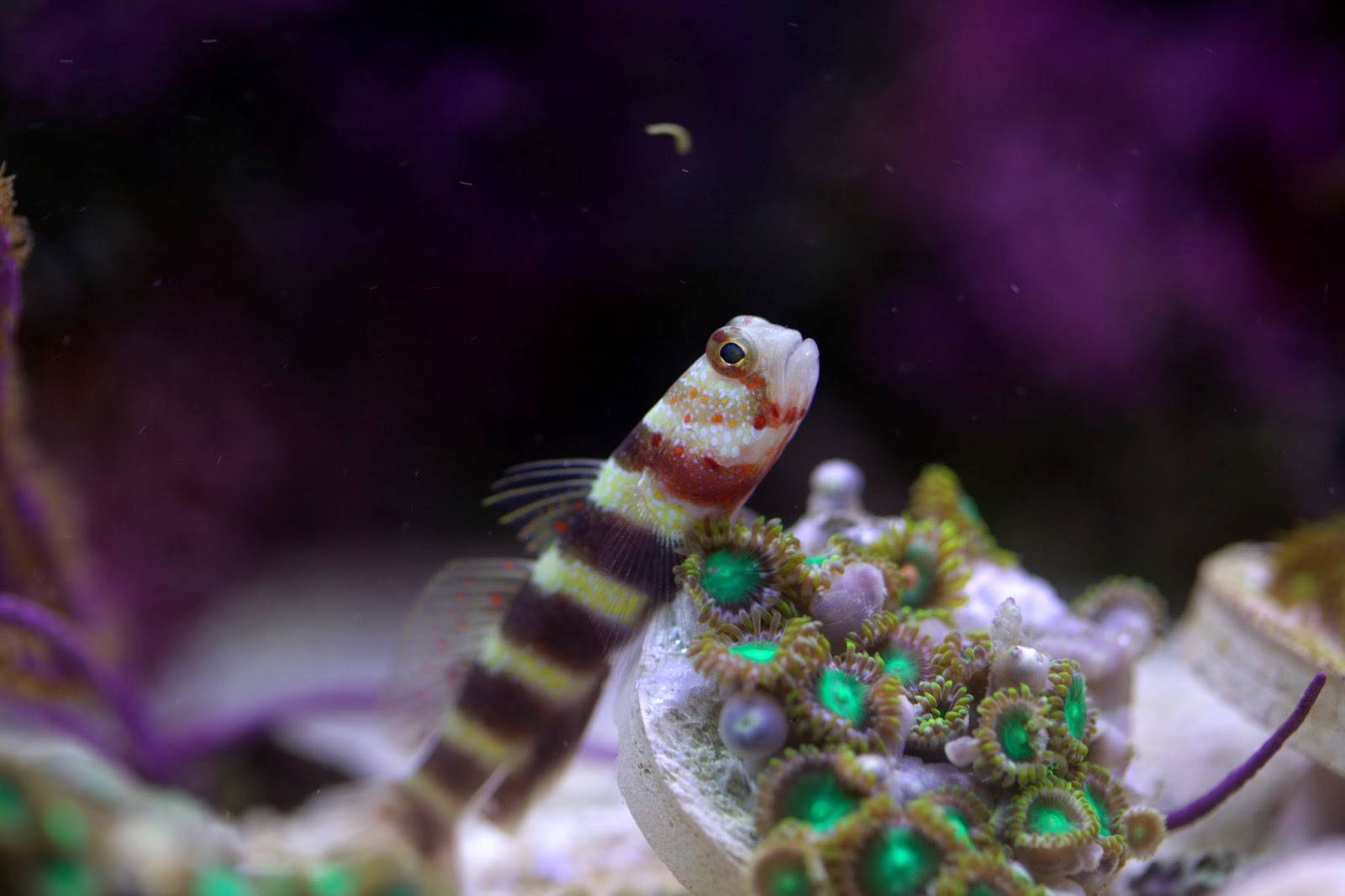 Gobies, in general, are a perching or hopping fish. They hop from coral to coral or from one spot to another on the substrate. They do not actively swim around except when making a beeline for a tasty morsel they must have. Many live in burrows, some with a symbiotic buddy shrimp. Some gobies have unusual diets, like the Yellow Clown Goby that enjoys munching on SPS polyps, while still enjoying foods you feed. It is not unusual to have occasional sightings of your goby, especially a burrowing goby. Some are cleaners, like a sand-sifting goby or neon goby which cleans other fish. Overall, the Goby fish comes in beautiful colors, sizes and also temperament. Only one goby of each species should be kept in a tank unless they come as a mated pair. Some species of hi fin shrimp gobies sometimes allow other species to share their burrow and their shrimp. I have a Wheeler's Shrimp Goby named Grumpy and ever since he lost his pistol shrimp, he tries to jump out of the tank once a day to off himself. Gobies also come in micro sized species like Trimma and Eviota which are perfect for even Pico tanks. 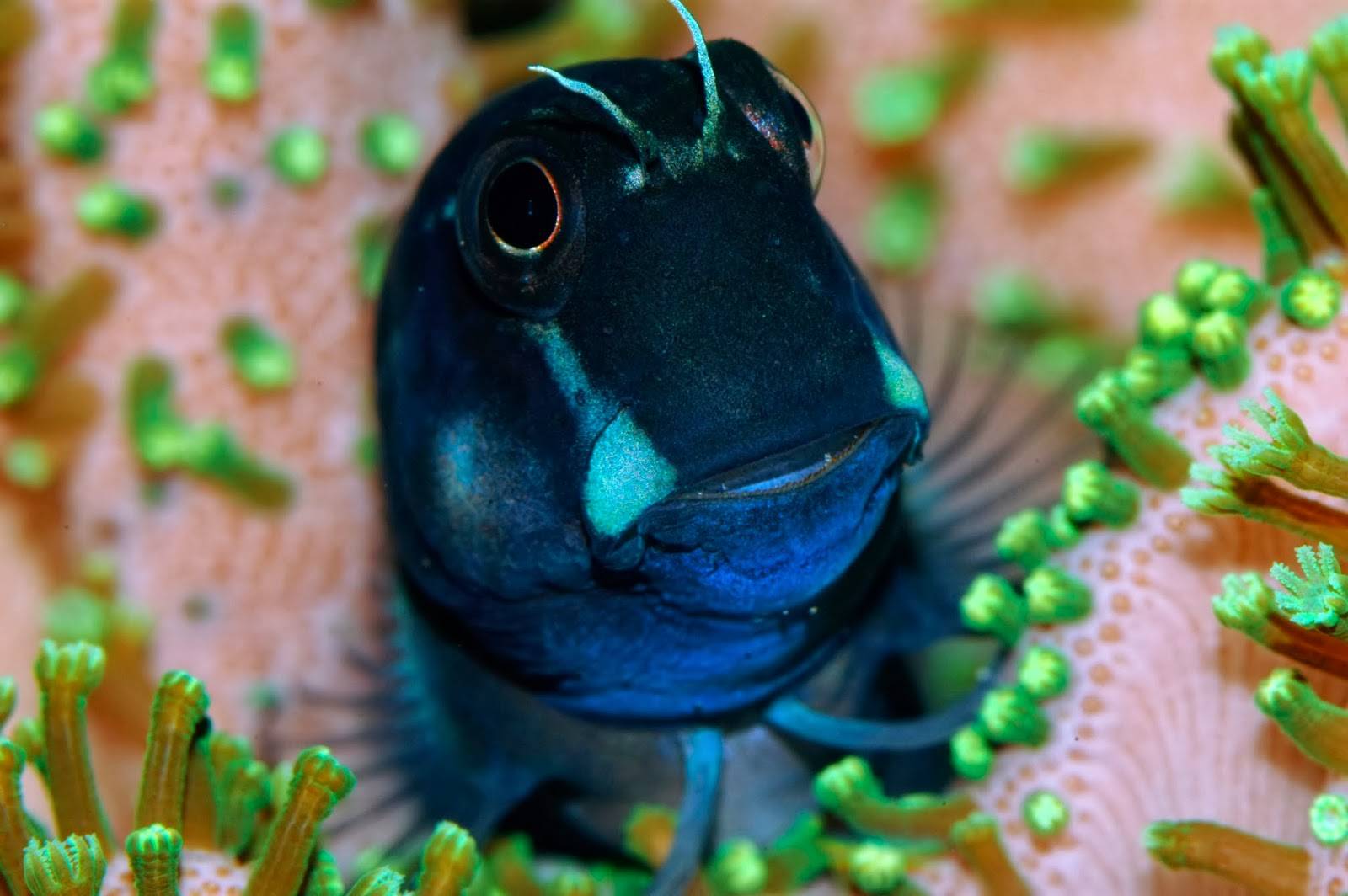 Their personalities alone make the Blenny fish a popular aquarium inhabitant. They chew on algae and swim about like an eel. Some are known to nip at clam mantles too. They do not have a swim bladder which makes them swim for a bit, then perch for a bit and repeat. They are an active fish, fun to watch and make any crevice or forest of corals a hiding place. My favorite is the Midas blenny. A beautiful yellow with big blue eyes, Geowge the Blenny was constantly bullied by my female clownfish. She even caught him by the tail twice. Geowge was healthy and even bit me one day (true story). Only one Blenny should be kept in a tank unless they came as a mated pair. 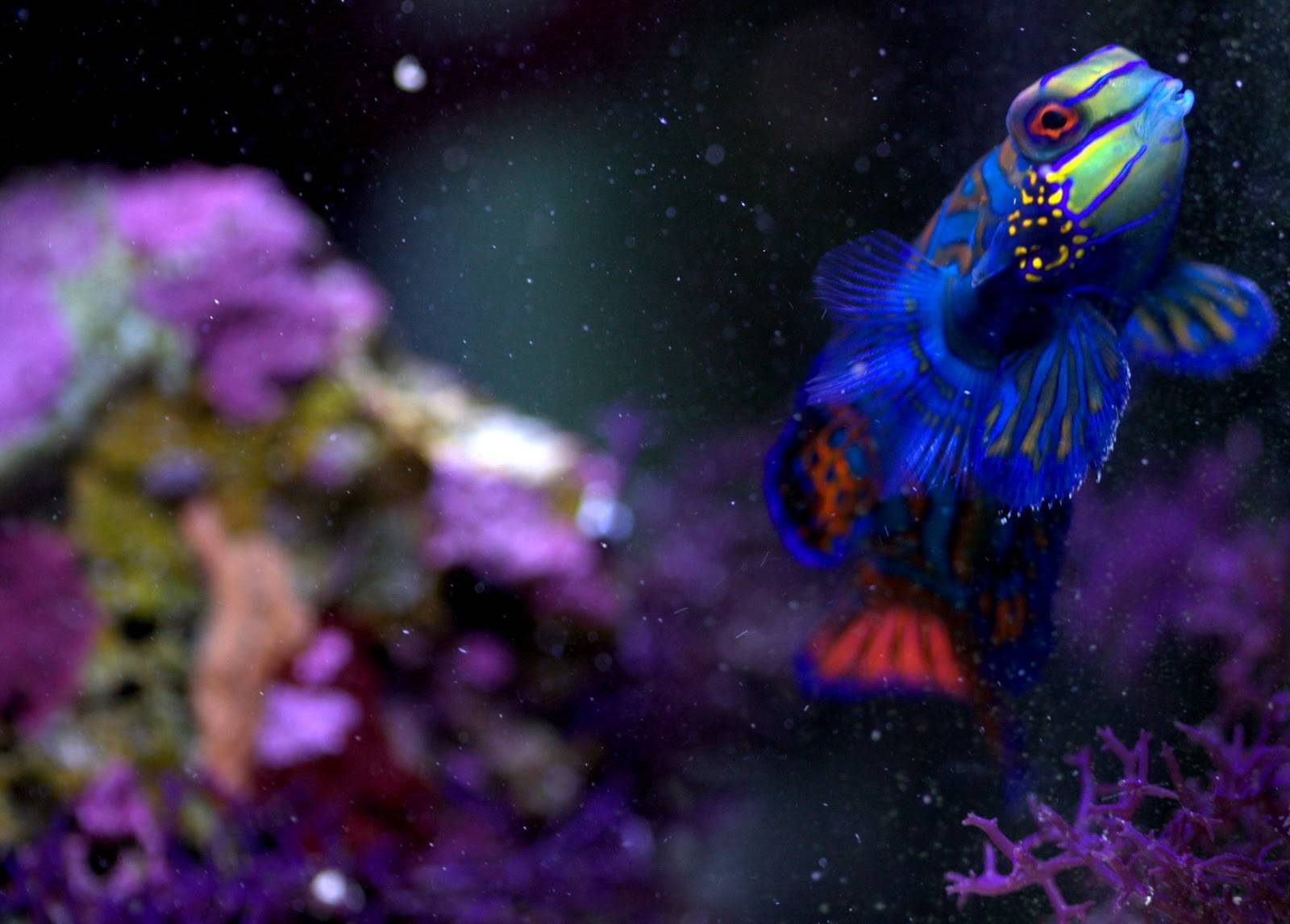 Specialty feeders and for the advanced hobbyist, Dragonets are gentle, gorgeous fish that come in many sizes, colors and patterns. They eat only live foods like copepods that are in every aquarium, however they deplete this food source extremely rapidly and for that reason they should only be kept in a mature aquarium that has been established for at least a year. Dragonets can be trained to accept prepared foods, or you can culture Tisbe pods for it. Mandarin feeding will generally compromise your water quality as this fish needs to be fed several times a day. They are gentle fish and do well in a species-only tank where they are not out-competed by faster, quicker fish when being fed. Dragonets are easy to sex by their dorsal fins and will pair and spawn readily in the home aquarium. 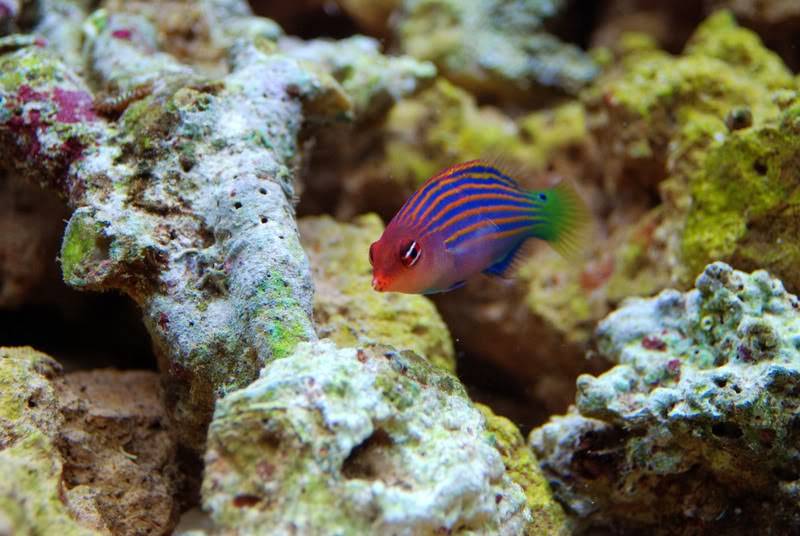 The six-line wrasse is a popular choice to keep pests at bay and to add a splash of color. A very active fish, a six-line wrasse can sometimes be a bully. While most wrasses get too big for a nano tank, the 6 line, Pygmy, Pink streaked and Possum Wrasse stay small and do well in a community aquarium. They are easy fish to keep, accept a variety of foods readily and prefer a tank with sand to sleep in. It is common to see a wrasse bury itself in the substrate to sleep at night. Wrasses can and do jump and a lid is needed on your tank if you intend to keep one. I have a 6 line I named Mark Sanchez for the Jets QB who has the number 6 jersey. 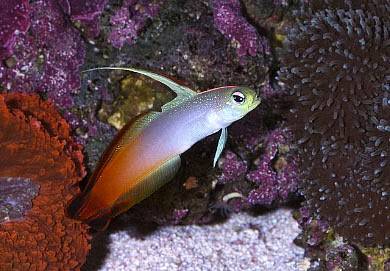 Generally a shy fish, firefish will come out to play when they are comfortable in your aquarium. They have very elegant long bodies with unusually shaped fins and swim about in jerky motions. Their coloration is beautiful, the bodies have an ombre effect with more than one color on each fish. They do well in pairs if they are sold as such but otherwise do well on their own. They are known jumpers so a lid on the tank is essential to keep these fish. They are non aggressive and a great addition to the aquarium. 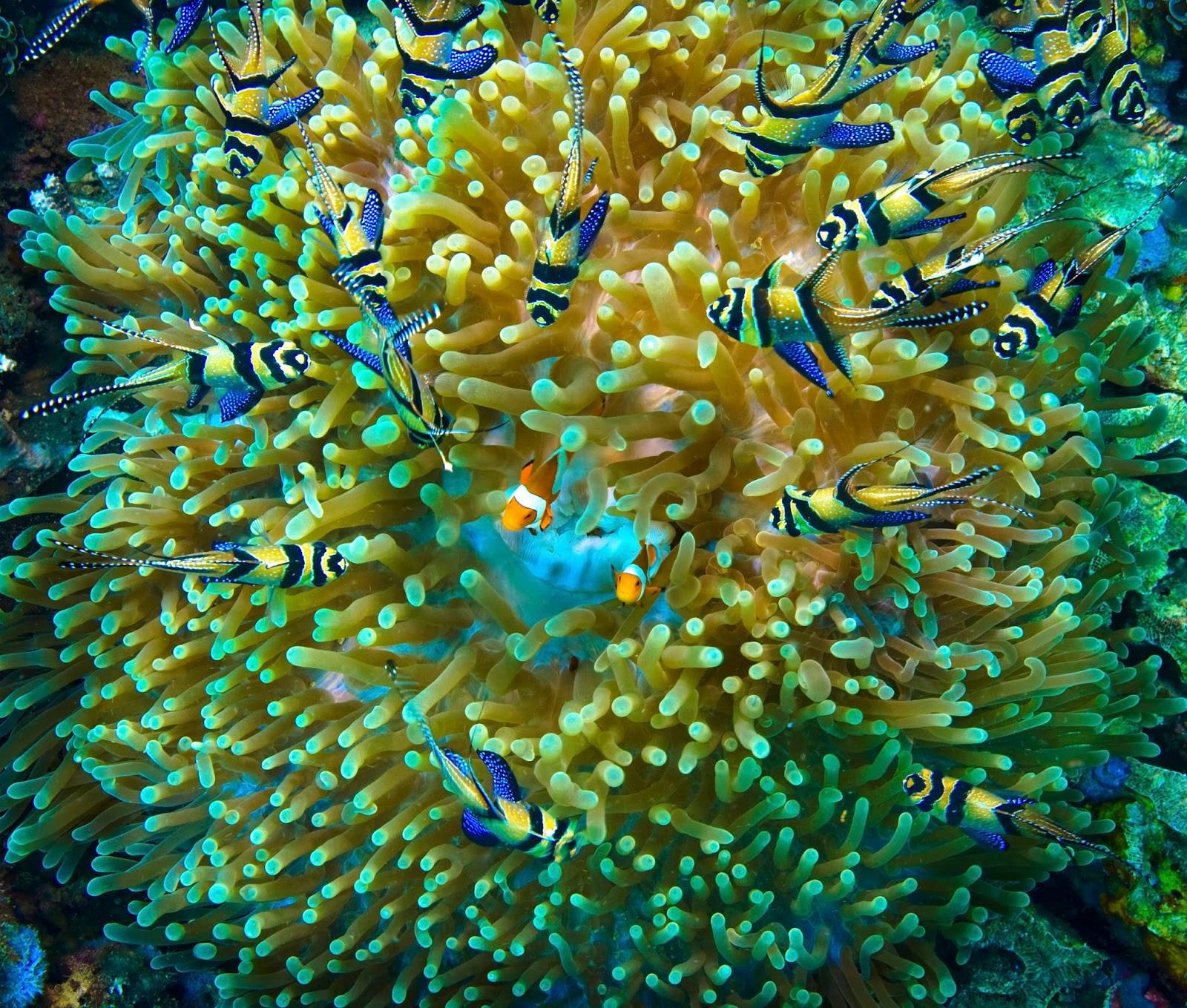 Gentle and bold, the most noticeable Cardinalfish is the Bangaii. Striking black and white coloration, huge eyes and a tendency to stay in the water column, Bangaii are always looking for a photo op. It is difficult to sex the Bangaii Cardinalfish, but if done correctly a pair will readily spawn. Other species are the pajama cardinal, and several striped varieties that do well as a small group without aggression. They are an active fish and once acclimated to your tank will always be out and about looking for food.

The Royal Gramma is the most popular choice of Basslet for the nano hobbyist. Swimming upside down is one of the characteristics of this fish. The Royal Gramma comes in a gorgeous fuchsia and gold combination but others, like the Gold Assessor and Black Cap, are also striking. They can become territorial and prefer the darker areas of the tank, especially rock caves. They are aggressive towards their own kind.

An active fish, Chromis are a low maintenance species that are usually kept in small groups as they are a shoaling fish. I had 3 that were named Google, Chrome and Picasa. They are quick and non aggressive although they can be mean to one another sometimes. Chromis are usually inexpensive fish and add an instant splash of color and movement to any reef. They are not finicky eaters and have also been kept in predator tanks like Mantis and Frogfish because they are quick enough to evade becoming a meal (although their luck can run out anytime).

There are more fish than these that are appropriate for nano aquariums. Whichever combination of fish you choose, be sure to check compatibility before purchasing.