Could adding more aquarium powerheads or increasing the flow from your existing pumps be the ticket to taking your tank to the next level? In order to find out, we have been monitoring the growth rates of corals in four identical reef tanks to see exactly how much the amount of water flow affects the rate at which SPS corals grow.


After four months, we have the first set of meaningful data to share and the results will likely surprise you.

In a previous BRStv Investigates introducing this experiment, Ryan laid out the set up and explained in detail what exactly we are looking to discover.

In a nutshell, we have 4 identical Red Sea e170 tanks stocked with 100 SPS coral frags of the same species. Two of the tanks are running with low-medium flow (3000 GPH) and the other two with double (6000 GPH) the amount of flow. Each tank contains 25 frags of the same species and also identical lighting, filtration and auto water exchange schedule. The parameters are being maintained using sufficient two part solution to maintain the same major element levels across the board.

The reason we are using four tanks, two parallel experiments, is to get a redundant set of data which is always much more compelling when making a conclusion. So our plan is to compare data from tank #1 to tank #3 and then tank #2 to tank #4.

The data we collected was the amount of calcium and alkalinity dosed into each tank which will give us a solid indication of which tank is consuming more and therefore growing more. We also recorded the individual weights of each coral to calculate a weight percentage increase over time.


Before we dive into the results, we are compelled to share that through these first few months we experienced zero mortalities among the corals, making it the easiest BRStv Investigates with live corals so far. We credit this to the captive bred coral frags donated for this experiment by ORA - Oceans, Reefs & Aquariums.


This goes to show that buying captive bred corals that are already acclimated to life in captivity will definitely increase your odds for success. 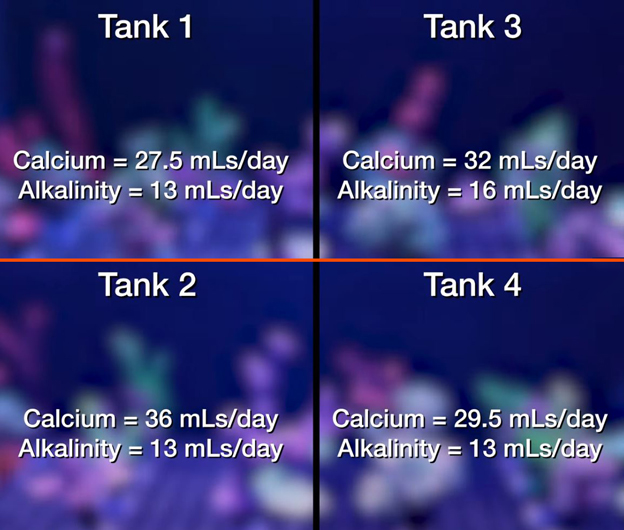 Looking at the amount of calcium chloride and sodium bicarbonate dosed into each of the aquariums over the first two months, we really saw very little difference across the board. Almost identical amounts are going into all 4 tanks daily. At face value, this suggests that double the flow rate really had no impact on coral growth rates. 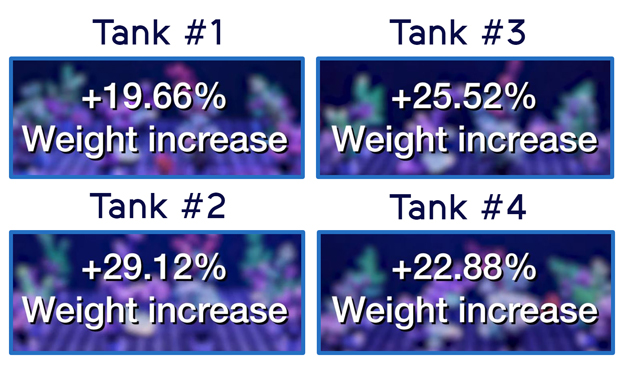 After two months the low to medium flow tank #1 gained 19.66% in total weight of all 25 frags. At nearly double the amount of flow happening throughout tank #3 there was only a total of 25.52% total weight gain.

In our redundant experiment, the lower flow tank #2 corals gained 29.12%, however the higher flow tank #4 showed even less growth at just 22.88% weight increase.

Stepping back and looking at everything as a whole, there really was no significant increase in growth between the lower and higher flow tanks through these first two months. Somewhat contradicting the common thought of higher internal flow rates resulting in faster SPS growth. So we decided to create an even more drastic gap in the flow rates in an attempt to gather more conclusive results.


We widened the gap by decreasing the flow in our low-medium flow tanks by 50%. This dropped the overall flow to about 1500 GPH in tank #1 and tank#3. In the higher flow tank #2 and tank#4, the pumps were left unchanged and continued to run with a total flow rate of 6000 GPH in each tank. 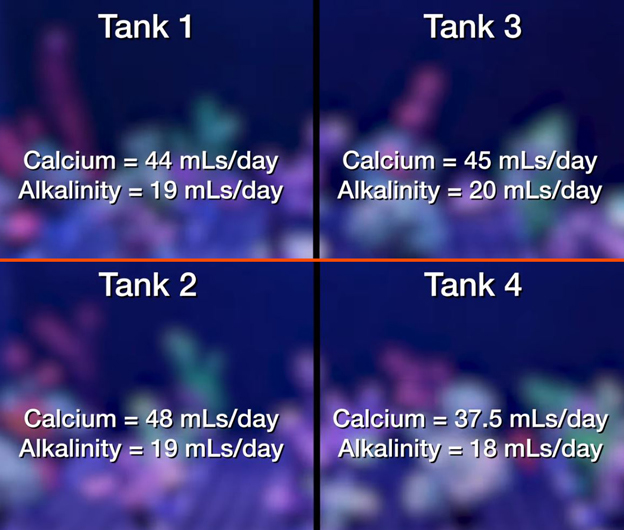 To save you the suspense, nothing really changed in the way of major element consumption. All four tanks are still requiring very similar doses of calcium and alkalinity daily which is about 20mL per day of calcium chloride and 45mL per day of sodium bicarbonate. 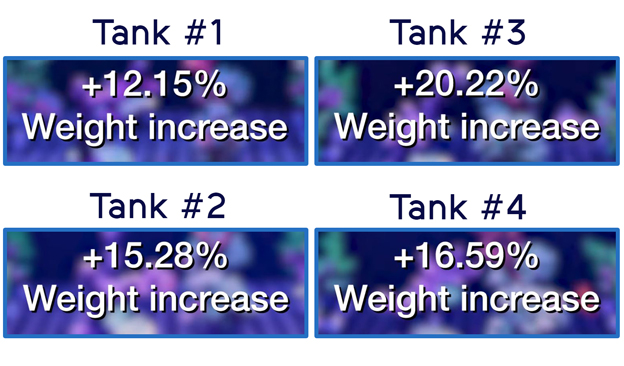 As expected, comparing the 12.15% weight gain in tank #1 to the 20.22% gain in tank #3, the increase in weight between the low and high flow tanks isn’t overwhelmingly dramatic. The results for tank #2 and tank #4 was even less drastic with only a 1% change.


Now we’ve seen the data of two different experiments showing very similar results but what about the visual look of the corals themselves? Will our eyes be able to pick up on any visual cues of growth differences between one flow rate to another? 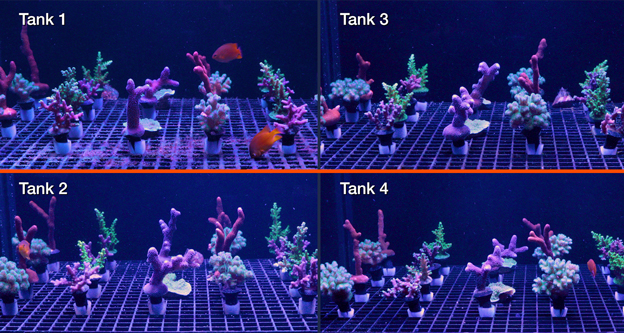 Here are some side-by-side comparisons of all four tanks, comparing tank #1 to tank #3 and tank #2 to tank #4 after four months of different flow rate testing. Please feel free to share your thoughts in the comments, join the conversation on Reef2Reef, or chime into the #askBRStv group on Facebook. 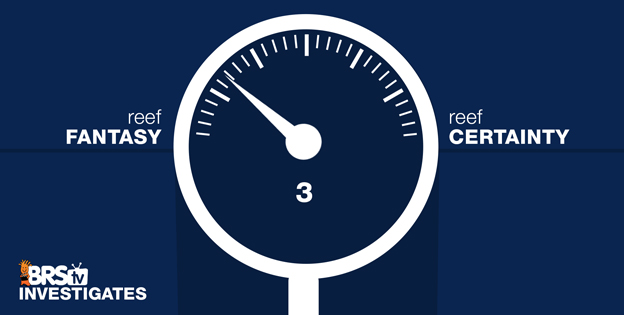 Will increasing the flow in your display tank by double or even quadriple result in faster coral growth?


We give this a 3 on the reef fantasy scale and the only reason this is not a 1 is because our results really defies so much common thought about water flow in reef tanks. Anecdotes from hobbyists, other studies and feedback from aquaculture professionals all would lead us to think the very opposite.


Something else to consider is the lack of an aquascape or rocks inside our test tanks which really affects flow patterns and also creates dead spots inside home reef aquaria which again contributes to why we are still rating this a 3 instead of a definitive 1 on the Reef Fantasy scale.

The biggest takeaway here is that you can expect similar growth rates among SPS corals so long as you reach the lower end of the recommended flow spectrum (33 times total turnover per hour). Our data shows that even when increasing the flow to 4x that amount, no substantial increase in growth should be expected ...when unobstructed by your rockwork or aquascape.


Still curious about how to grow corals fast? Although this experiment did not show significant results, there are certainly other aspects of your reef tank that you can control in an attempt to increase growth. A perfect example is our BRStv Investigates series in which we tested elevated levels of all three major elements which proved to have a much more substantial effect on coral growth.