We have only just begun and in this episode Ryan shares his personal journey as a hobbyist, including all of the successes, failures and ultimately the path that led him to building a 360 gallon dream tank in his home.


You will get some insight into why Ryan is such a dedicated hobbyist and how these personal experiences will shape the #BRS360 dream tank install over the next 12 months. Having this context will make the entire journey more fulfilling but Ryan also shares one fundamental thing that helped him transform his first mildly successful saltwater tank into a beautiful and thriving coral reef tank.

Most of you know Ryan as the host of BRStv and a co-owner of Bulk Reef Supply but what made those two things happen was his desire to have a reef tank and enjoy the hobby.


Just like most of us, Ryan finds it exhilarating to dive head first into his passions. He enjoys learning about challenging new things and most of all, sharing the lessons he learns with others.


“The bigger the challenge, the more interesting it is.” - Ryan B.


Reef tanks are a seemingly endless journey of acquiring and applying knowledge. They will challenge you at every turn but the successes and failures for that matter offer a great reward.


These challenges are why Ryan has been building reef tanks all this time and being able to share the lessons and experiences with all of you is what drives us to keep going here at BRS. 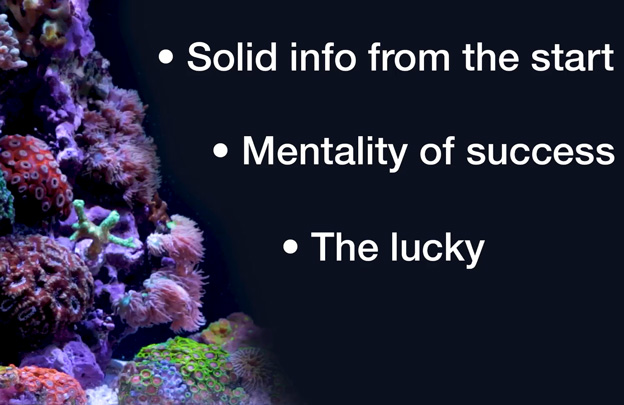 How to make it past the first 12 months


•Have a solid source of information and the wisdom to listen to those who came before.


For Ryan, it was a combination of all three that helped him survive the first 365 days as a reefer.

The beginning - it all started with two fish stores

It was back in 2004, with zero knowledge of reef tanks and $2000 in his pocket Ryan walked into a fish store. He asked for a 90 gallon tank and everything he would need to set it up which was the first failure.


Nobody at the store wanted to take the time to walk Ryan through buying everything and the same thing occurred at fish store #2. Somewhat blown away that nobody wanted his business, Ryan hung his head and returned home to start researching on his own. It wasn’t until 15 years later that he realized the problem was not the fish store, it was him.


While both the fish stores and Ryan could have done a little better, it was unrealistic to expect all of this could be learned in a single conversation. Even the best fish store would need hours and hours of free time to give you guidance which is just not feasible.


The best experience would have been some valuable tips, a guidebook and a handful of useful tools. Something like a starter kit that does exist at some of the better local fish stores and certainly helpful to beginners.


This story is relevant because it is the foundation of everything to come. Both the personal path of becoming a reefer and the professional journey of owning Bulk Reef Supply traces back to that moment; walking out of two fish stores with nothing but the money he walked in with.

Reefing is not actually all that hard, the missing piece inhibiting the success of many is easy to access reliable information. An amount of information that certainly goes way beyond what a single person can tell you in ten minutes or even an hour.


What came next is something that many of you long time hobbyists can probably identify with, the sheer willpower it takes to figure out reef tanks on your own. Knowledge was not exactly easy to come by in the early 2000s and prior, YouTube didn’t even exist.


After reading several books, most of which were dated, Ryan found he had really only understood the basic theory. This is where forums come into the scene which at the time were the #1 source of knowledge transfer.

That said, all of that information at your fingertips can be dangerous.


Forums provide an awesome arena to have exploratory discussions with our peers. Facts, theories, simple opinions, anecdotal experiences, and complete falsehoods are all present and debated equally on forums. They provide users with a platform for decision, debate and ultimately the evolution of the hobby but they are also a difficult source of knowledge to decipher for brand new reefers, double so if you don’t have unlimited time.


Finding the best information for the best chance at success on a forum can be like panning for gold where the best advice isn’t just hidden in the sand but also mixed amongst the fools gold.


It is the nature of an open community experience, you may get a dozen or more different answers to the same question, never really knowing who to listen too.


The community is half of what makes this hobby fun for many of us but learning how to find the gold only comes with experience.

At some point during 2004, Ryan purchased the 90 gallon tank he was after and began stocking it. Buying equipment and making decisions based on information from unvetted sources on the forums.


Digital cameras at the time did not produce the high resolution photos we can get from our smartphones today but regardless, this is what that 90 gallon tank looked like during the first year. Although Ryan was proud, it was far from the best and miles from what we can achieve in contemporary reef tanks.


Sadly almost every piece of equipment on this tank eventually was replaced, some more than once. It either failed, flooded or wasn’t adequate for the job. His budget of around 2K quickly doubled in the first 18 months not because that is what is required but because of all the mistakes and purchasing replacement gear or upgrades.

Surviving on a patchwork mostly held together with sheer willpower, there was a significant turning point for Ryan that came next. While it wasn’t exactly definitive at the time, looking back, this is the point at which he stopped listening to everyone and started listening to someone.


Ryan found a mentor, someone who gives you their time, shares your values and proven themselves worthy of listening to. Not just one either, Ryan stumbled across a few of the best.


Randy Holmes-Farley on Reef Central was the go to guy for chemistry questions. His approached matched Ryan’s goals at the time which was to find the cheapest way that will work, avoid the unnecessary and take advantage of the value in DIY solutions.


It is safe to say Randy has helped thousands of reefers achieve success and is still helping people today on Reef2Reef. 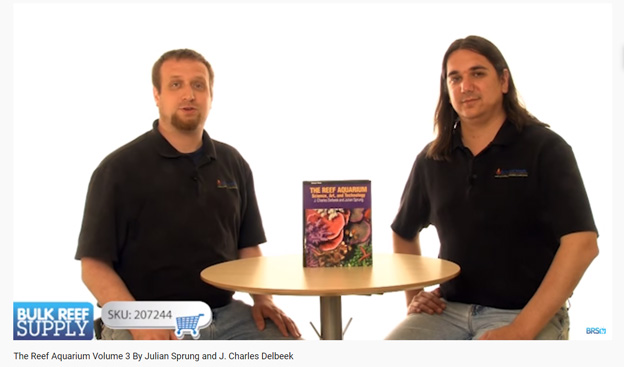 Julian Sprung, the owner of Two Little Fishies, authored a book titled “The Reef Aquarium Vol. 3” which explained how all of the gear and various approaches to using the gear worked together. It made clear that there wasn’t one piece of equipment that would give you success, it requires everything working together. Pumps give you flow, skimmers keep the water clean, lighting promotes photosynthesis and so on.


Going to MACNA and IMAC gave Ryan the opportunity to listen to the academics and their research in the field. In particular, Anthony Calfo’s advice on propagation was what inspired my desire to propagate corals down the road.

The one move that Ryan attributes to being the most beneficial at this time was getting involved with his local reef club and their online forum, TCMAS. The difference was accountability, most of the people involved in a local club like the Twin Cities Marine Aquarium Society (TCMAS) are friends or acquaintances and see each other at fish stores or meetings. This adds an entire new level of trust in the information provided online and the general respect for one another.


One TCMAS member in particular, Ryan points out as being his main reefing mentor, David Gregor. Amongst a slew of other things, he taught Ryan how to source and automate DIY two part solution for calcium and alkalinity supplementation.

A quick search online will show David Gregor was voted as Neptune System’s Reefer of the Year, how he saved other people's tanks and how he taught people to reasonably source DIY chemicals among many other things.


If you have not done it already, we encourage you to check out the club section on Reef2Reef and join a local reef aquarium club. You will likely find a tight-knit community that will provide you with the perfect balance of information.


The rest is history

At this point, Ryan was armed with the power of knowledge or at least the ability to acquire that knowledge easily. Putting effort into the quality of advice he was getting was a direct causation of the success he soon experienced thereafter. Reefkeeping milestones like keeping clams, growing SPS corals and eventually propagating corals and keeping frag tanks. 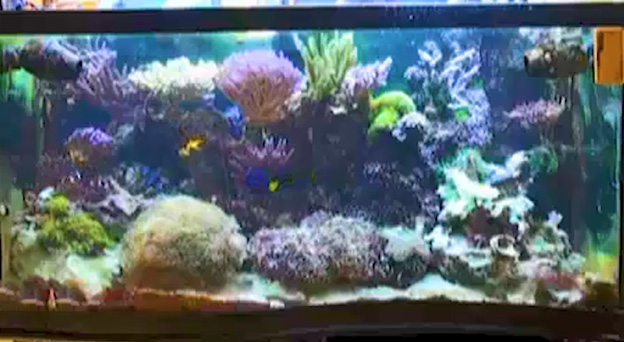 By the end of year number 2, that 90 gallon tank had come a long way.


Outside of this first tank being the foundation and the most critical step in Ryan’s journey, the reason we don’t need to discuss his tanks beyond that is many of them have been shared and documented.


We have been releasing these videos since June 2008. That makes 11 years of reefing documented almost from the very beginning.


The BRS360 is the next evolution, this time skipping the debate and simple sharing everything we have learned by building this epic tank in Ryan’s home. 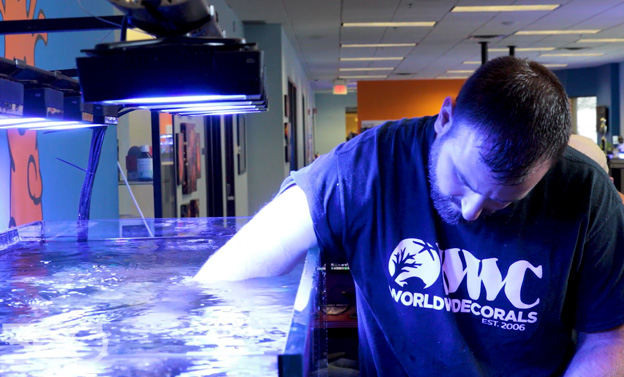 At this point in the game, Ryan still relies on peers and mentors to help perfect the application of knowledge he has worked so hard to acquire. These are people that produce results that Ryan himself aspires to achieve.


The World Wide Corals team is an obvious one who took the time to share everything they do to achieve such success. Then letting us share that information with all of you. An act worth the recognition and if you have not already, be sure to check out the entire WWC/BRS Hybrid video series.

Right after each of the BRS360 episodes we are going to be talking reefing live, doing our best to bring in special guests each week including some of the mentors mentioned here.


Last week we talked with Jeremy from Brightwell Aquatics and this week we are going to talk to Randy, our other BRStv host about his personal reefing journey and of course answer questions from all of you.