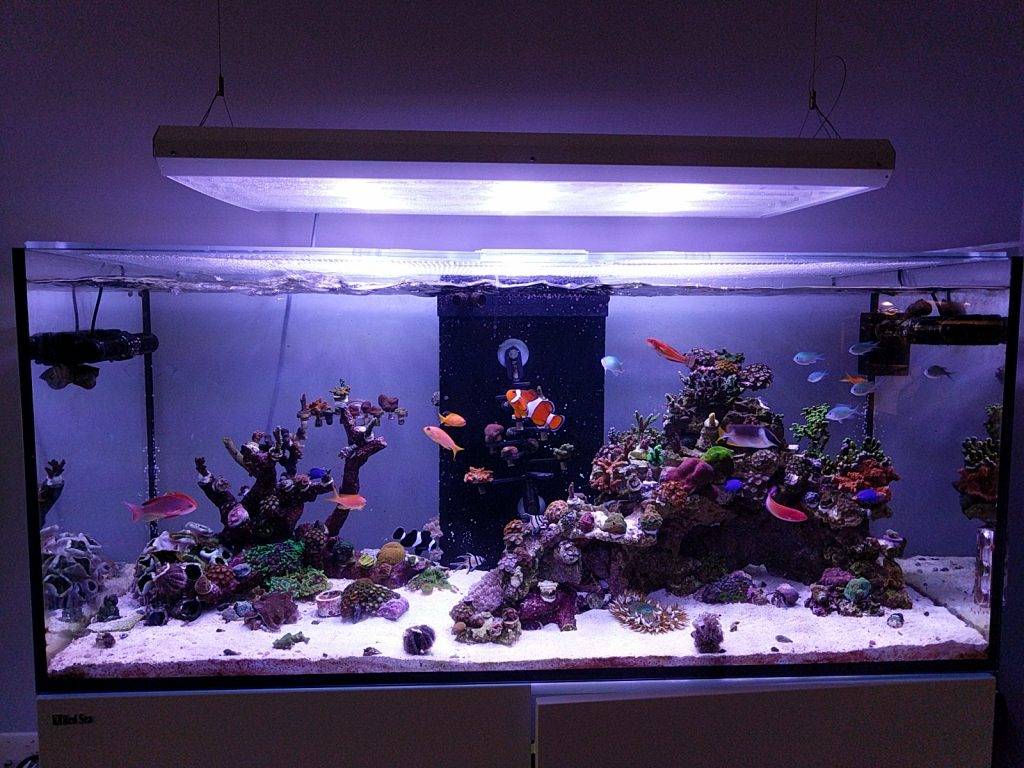 I was in the market for a new tank recently. I was going to move apartments and wanted a new tank to celebrate the move. My first user experience with a Red Sea tank was back in 2011 and I won my first TOTM on nano-reef.com with the 130D. I had 2 other tanks in the middle between upgrading from the 130D and the Red Sea Reefer 350 that I have now. I went to a couple of local fish stores to see the Red Sea Reefer tanks in person. I had a really difficult time deciding between the 250 and the 350, but eventually decided on the 350.

I planned my move and the furniture arrangement in my new apartment with the tank as the focal point. My move was not smooth by any means. I made quite a few mistakes while I transferred my livestock to a holding tank. It resulted in a massive fish and coral loss. All of these losses were avoidable and I felt really bad that I did not do a better job for my livestock. 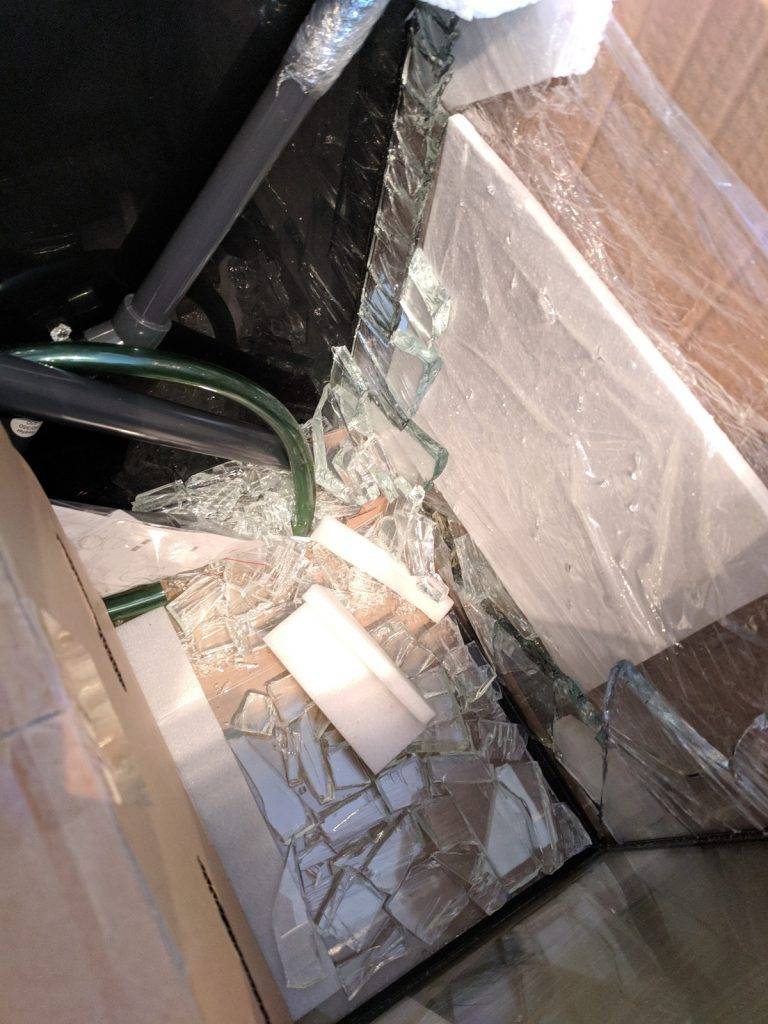 My Red Sea Reefer 350 arrived completely smashed! I cried after receiving the shipment but Red Sea was quick to make it right and soon dispatched the replacement tank. The second shipment was flawless! The replacement tank shipment could not have gone better. With the help of friends I got the cabinet assembled and they also helped me to put the tank on top of the cabinet. After that it was just a matter of filling in the water and starting my scape. I took my time transferring the livestock from the temporary holding tank, a 40 breeder, into this tank because I didn't want to rush it. I made the scape with Marco rocks, Caribsea and real reef rock branches. My sand is Fiji Pink by CaribSea. Once I was satisfied with the scape outside of the tank it was time to cycle the tank.

While I was deciding on the tank and waiting for the first shipment and then the replacement, I researched online and found that many if not all Reefer owners were doing modifications of some sort or the other to personalize their tanks. I bookmarked the mods that I wanted to try and I was ready to get to work when the tank arrived.

The first thing I did was to remove the black sticker film on the back panel of the tank. I scored it using measurements and a straight edge. I left the black cling sticker on at the back of the overflow box. The overflow box in the Reefer series is made of smoked glass and without the black film on the back, the light will pass through a clear back panel and the plumbing will show from the front of the tank. Peeling the backing off was really easy to do. 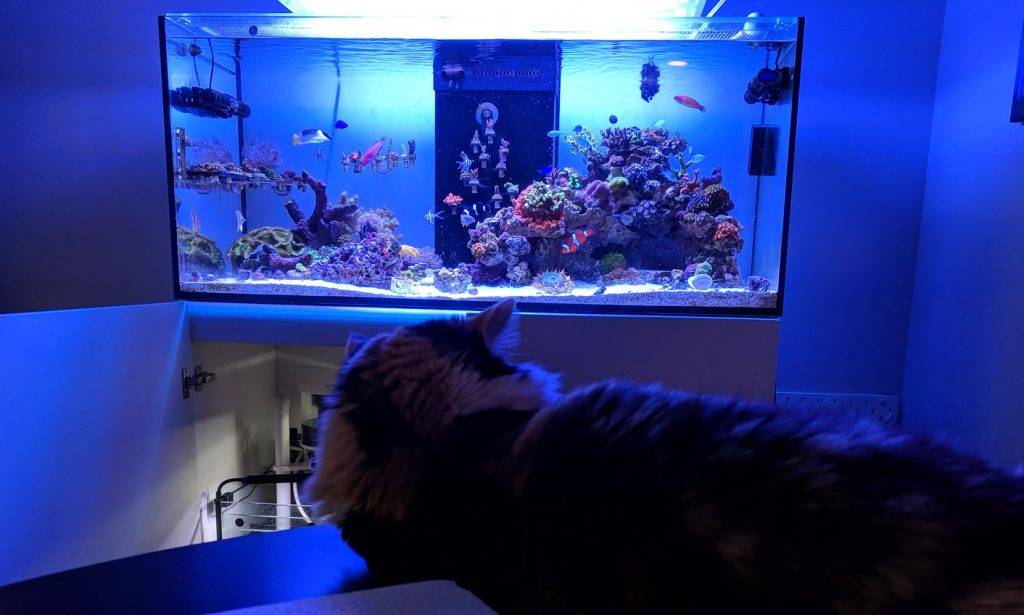 The second mod is also the most popular mod that people do to a Reefer. Converting the ATO Reservoir into a refugium. The ATO reservoir holds between 2.5-2.8 gallons (depending on the model you get) of freshwater for top off. For a lot of people it may be adequate but I like having more on hand for the top off and opted to use my Innovative Marine Hydrofill Ti ATO Reservoir instead. I’m not much use with power tools and barely have any so a friend was very kind and drilled two half inch holes on the ATO reservoir for me. Next we added bulkheads, tubing and a pump with a valve to control the flow and the refugium was ready! I have the V3 sump which is the new version of the Reefers. The V3 generation comes with a removable baffle to turn the sump into a compartmentalized layout that includes an area for a refugium. 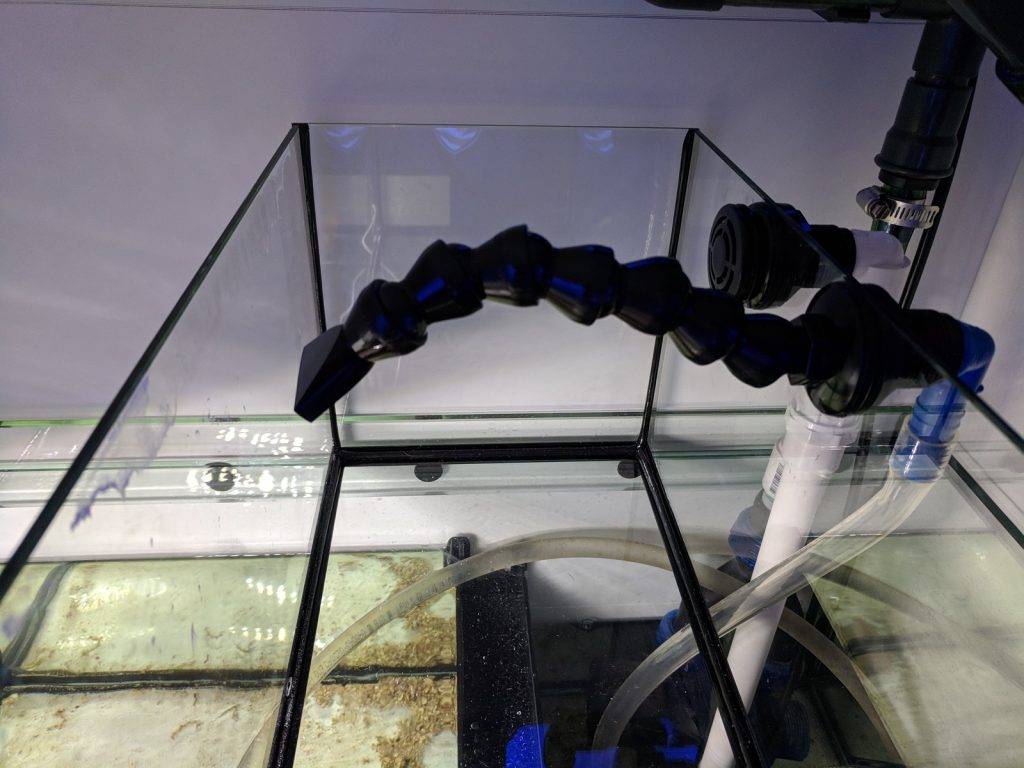 I like the idea of a removable baffle and a refugium but I liked the idea of an ATO as a fuge better. In retrospect I am not sure I will continue to have the fuge in the ATO reservoir - it makes moving it to do maintenance a point of stress for me. The sump is designed to move the reservoir as needed so I am not doing anything out of the ordinary here. However I am always wary of moving any glass box filled with water. 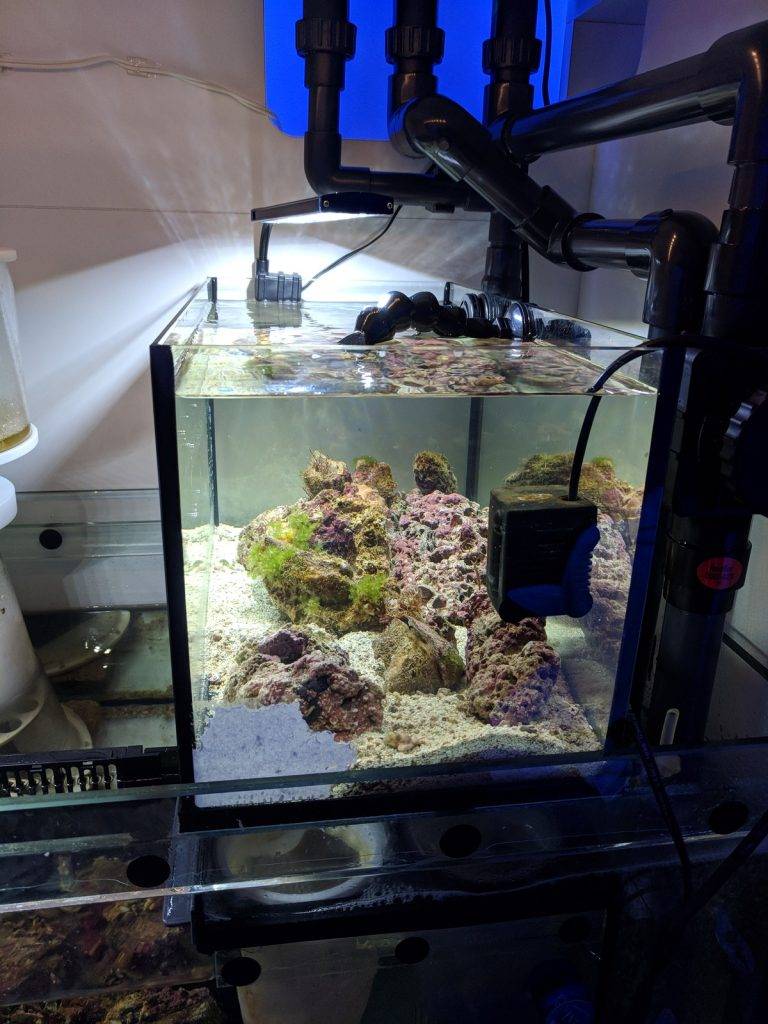 Another mod that I did was to paint the underneath glass panel of the sump white. The Red Sea Reefer stand comes with a pre-glued black foam mat where the sump sits. This dampens the sound from the sump but it makes it very dark inside. I opted for a white cabinet but the popular black cabinet would make the sump area even darker. Now, with a white painted bottom I can see into the sump very clearly for any detritus and clean as necessary. I used simple white acrylic paint from a craft shop and a craft roller. The paint dries quickly so you can layer it on a couple of times. Since the paint is applied on the underside of the bottom panel, the paint never comes in contact with water so I wasn’t too concerned about the kind of paint I used. 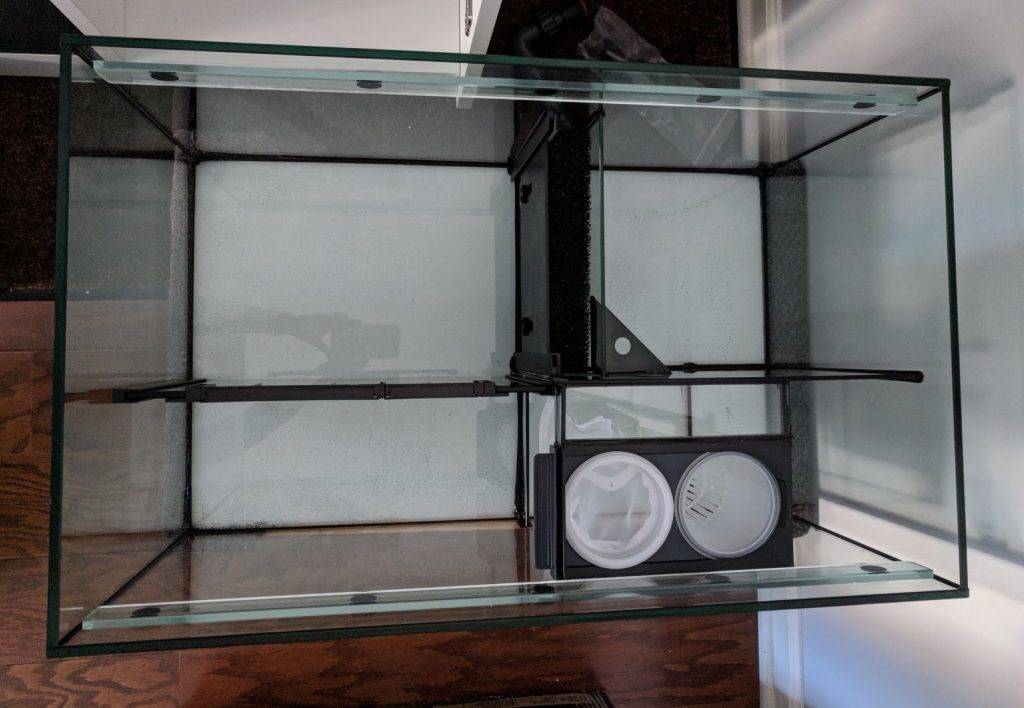 A rare mod but one that I recommend is a Y-shaped return nozzle. The reefer comes standard with a single nozzle that can be pointed in any direction you prefer. My endless research on mods led me to UK hobbyists who use this Y-shaped return flow director. I purchased a 3D printed nozzle from a fellow hobbyists and it fit perfectly on the return. I used some plumbing tape to make a good seal. The Y-shaped return nozzle allows flow to go in both directions. 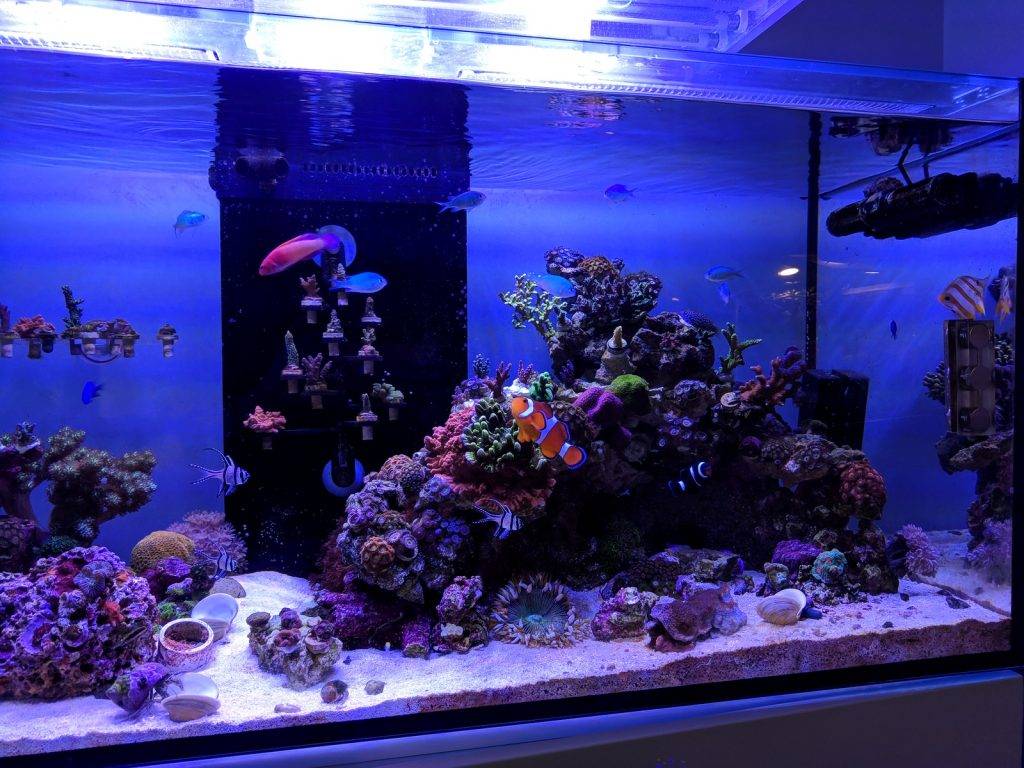 I am quite happy with all the mods that I did. Removing the black backing makes the tank brighter and the corals are more visible. The ATO fuge is host to a Christmas Tree worm, my old pal Juu, a Japanese Pistol Shrimp and Ferrari, a very small cute Scooter Dragonette. The painted white bottom on the sump makes the sump area bright and detritus easy to see and the 3D printed Y nozzle ensures that the return flow is dispersed on both sides of the tank.

Note: Modifying a product that is under warranty may void your warranty coverage.