Welcome to our second installment of the Marine Depot Fish Facts video series in partnership with Quality Marine.  Our focus for this segment is going to be the mesmerizing and gorgeous Dragonets.

Dragonets are an exceptionally beautiful family of fishes that include one of the poster board aquarium fish that captivates people everywhere and really sparks an interest in keeping a marine aquarium.  The 5 species we will discuss are reef safe and readily available in the aquarium trade but are clouded with a few misconceptions. 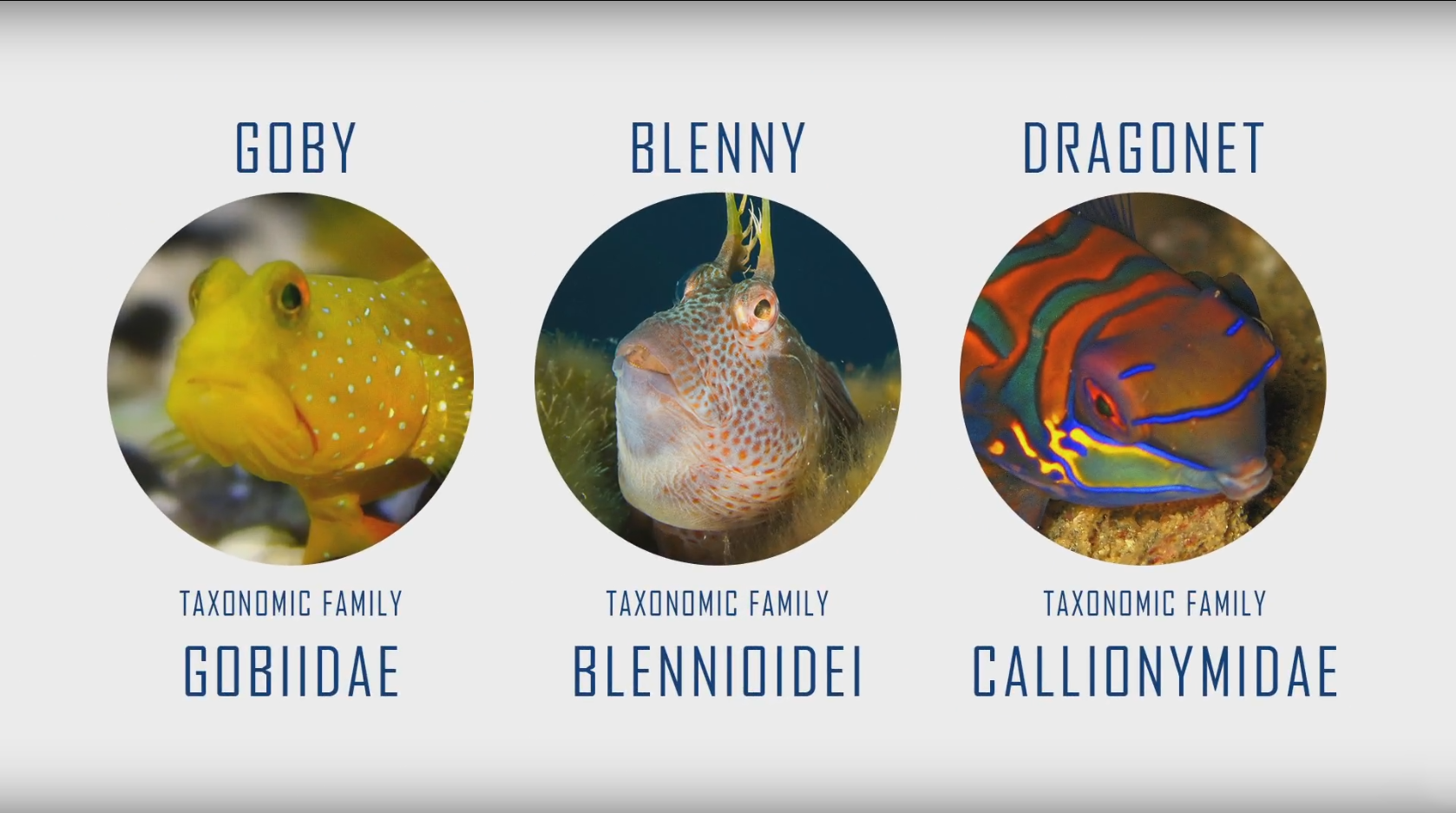 Dragonets are commonly confused and referred to as “Gobies” or “Blennies”, when in fact they are not gobies or blennies at all and are actually part of a completely different family of fish.

Dragonets spend their time cautiously prowling the floor of the reef.  They have small protruding mouths they use to feed specifically on live copepods, amphipods, and other micro fauna amongst the sand, coral rubble, and seagrass beds.

In aquariums, they have the unfortunate reputation of being difficult to keep because of the tendency not to accept prepared aquarium foods and competition for food by other more aggressive tank mates.  This is a very real and serious threat to these fish in aquariums.  They lack any sort of aggressive feeding behavior which often results in a slow and gradual demise in a fish tank because they cannot get enough food.  Thankfully, success is possible with just a little knowledge and understanding of the dragonet feeding behaviors. 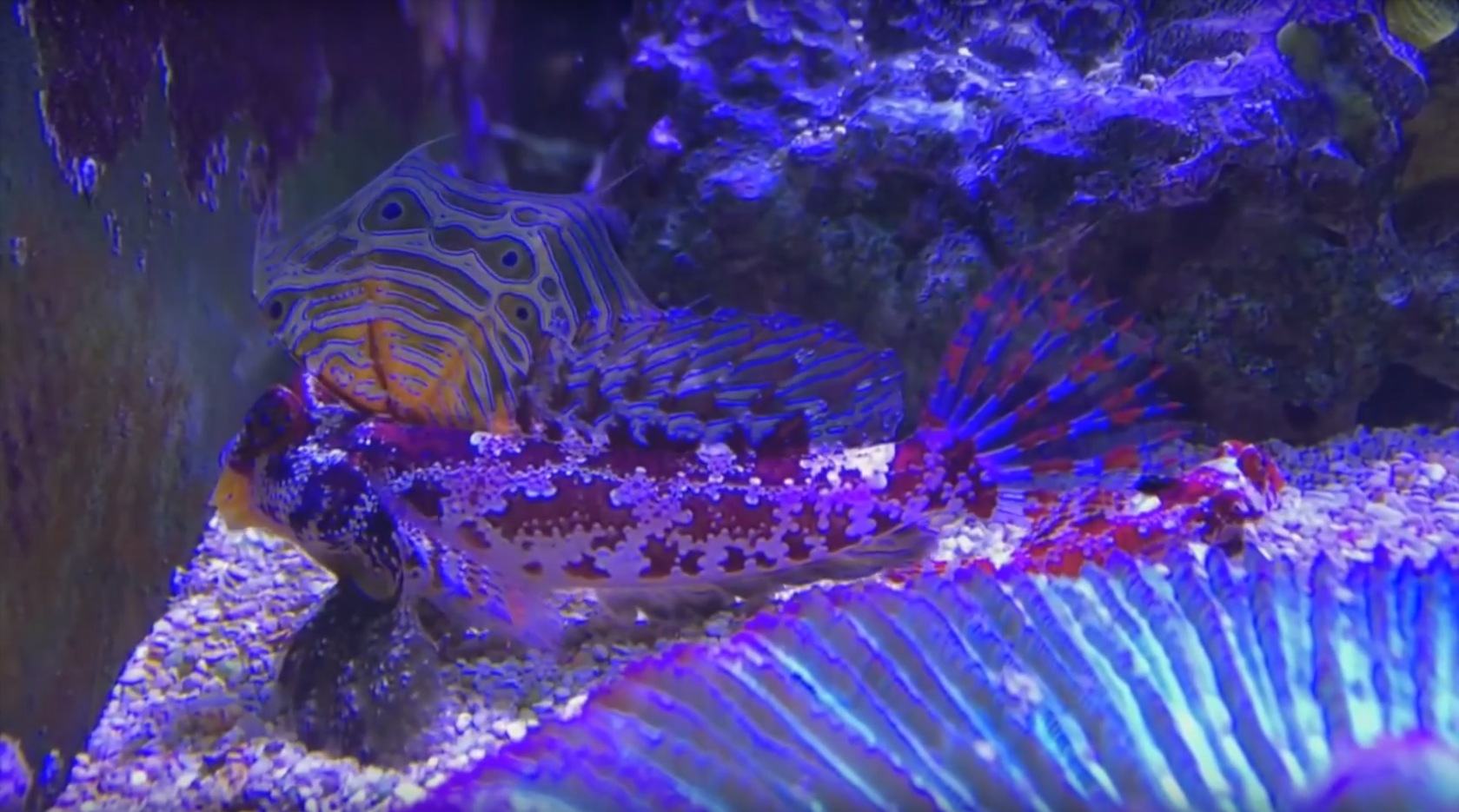 The best option, is to simply purchase a fish that is already trained to accept prepared aquarium foods and then house them in a well-established aquarium with other mild tempered reef fish.  Supplementing with live copepods and keeping a well-established refugium is highly recommended and pretty much required for success when keeping dragonets as well.  Larger, adult size dragonets tend to be a better choice for a home aquarium because the larger mouths mean they can more easily accept prepared aquarium foods.

Training the fish to accept frozen foods and even pellets is possible but takes persistence and patience. You want to Soak the foods in a vitamin soak such as Selcon along with garlic to help ensure every bite is as tasty and nutritious as possible.  Then, turn off all water flow inside the tank and slowly add the food into the tank giving it plenty of time to slowly sink to the bottom.

Smaller tanks less than 50 gallons with few tank mates makes it much easier for the dragonet to actually get the food.  Dirty glass will prevent the fish from getting aggravated with it’s own reflection and and low light helps keep the fish comfortable.  These fish will almost never come to the surface for food so be patient and hopefully your Dragonet will get the picture after a few weeks of regular offering of prepared aquarium foods. 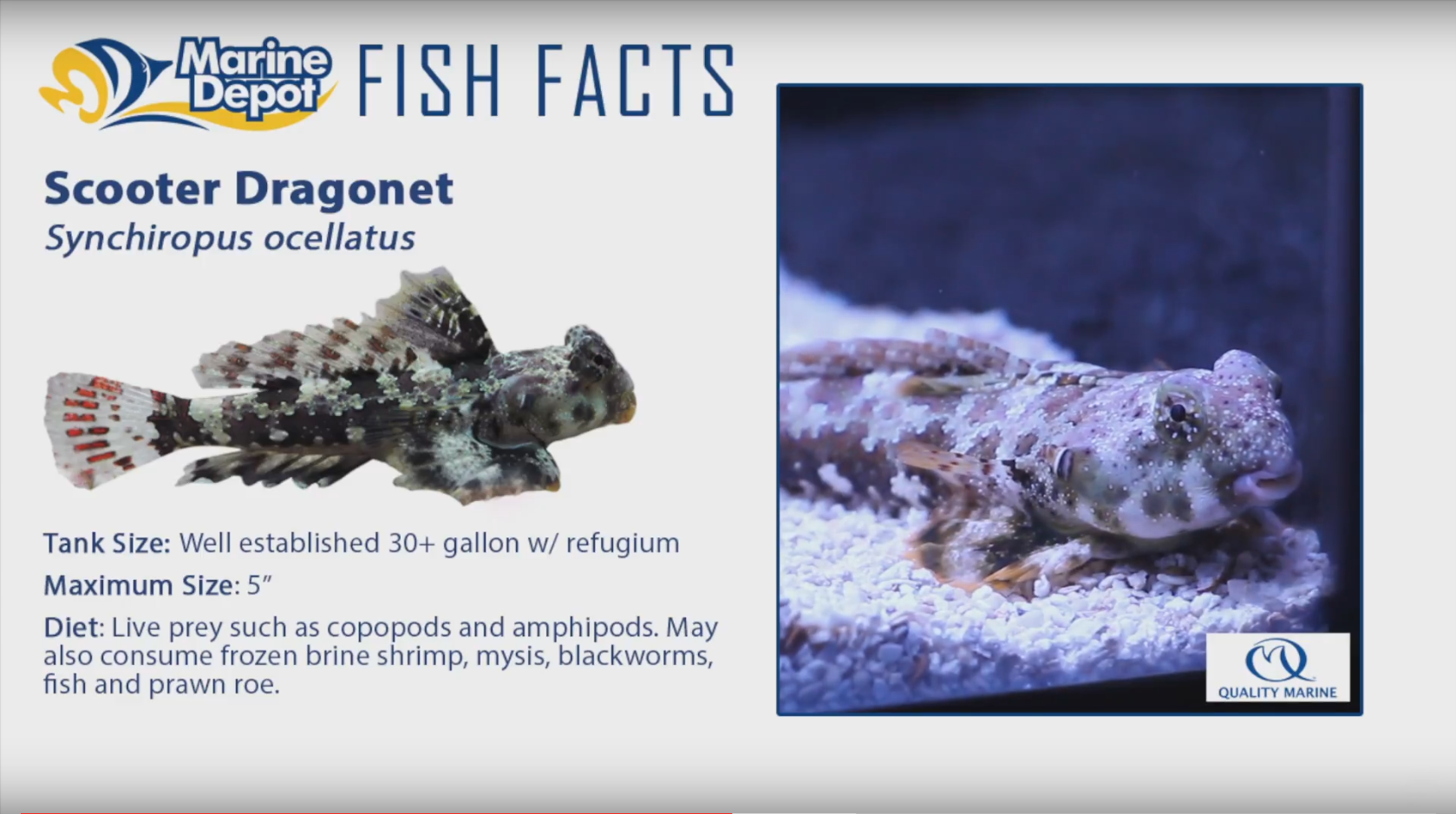 Commonly called the Scooter Blenny or Ocellated Dragonet is a cute little fish that will slowly move around the rock work looking for food.  The males have a large and wonderfully colored dorsal fin which is quite a site to see if you can catch him flashing the fin, fully extended.

They reach a maximum size of 5” and should be kept in aquariums of about 25 gallons or larger with an abundance of live rock to dwell in and hunt for food. They can be kept solely or in small groups if desired with 2-3 females for every one male fish.

The diet should be compromised of enriched small meaty bits such as frozen brine, mysis, cyclops, and oyster or shrimp eggs.  Because they have a tendency to be finicky eaters, careful attention should be paid to ensuring these fish consume the food they are offered with minimal competition. 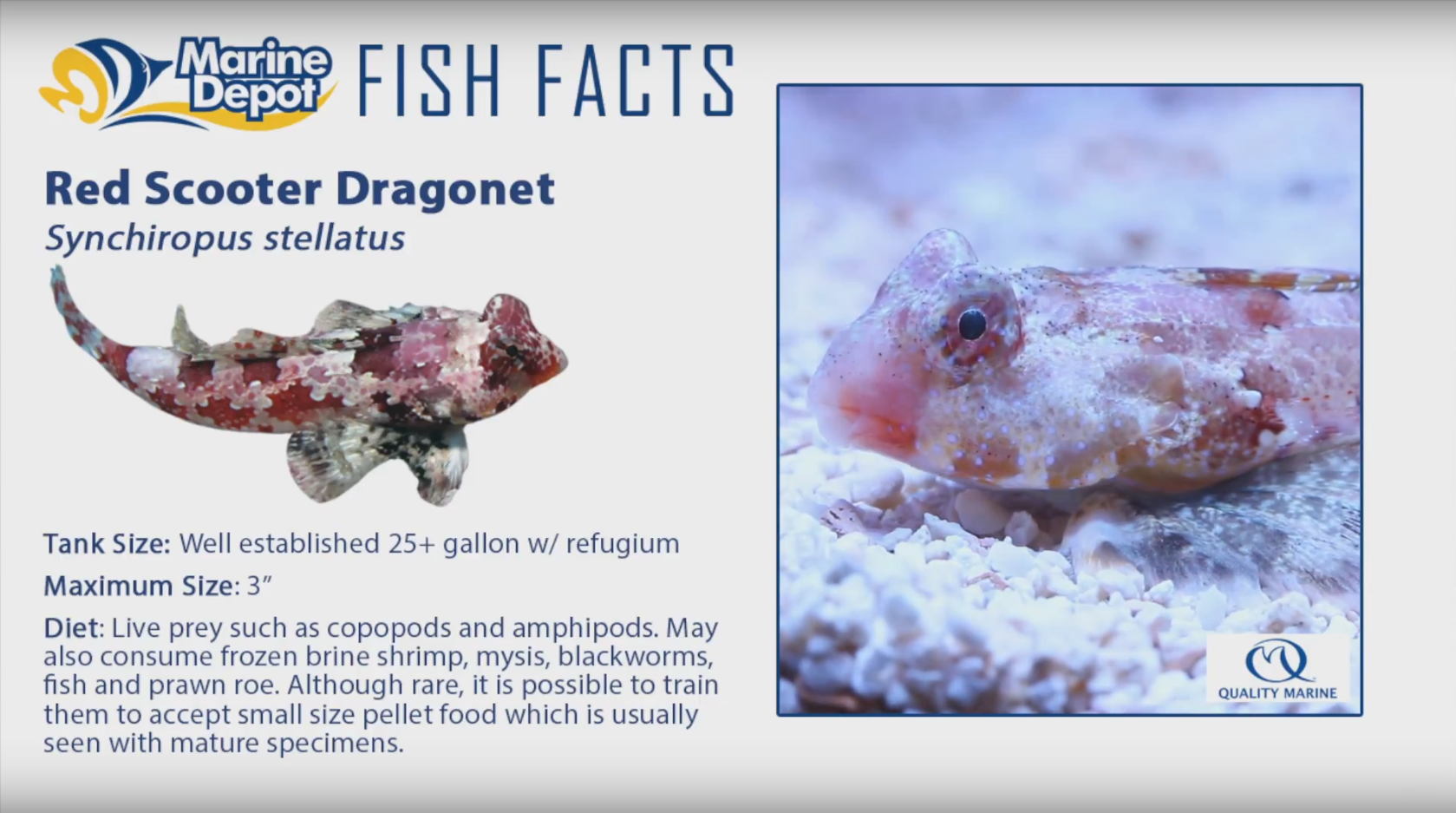 The Red Scooter Dragonet is also referred to as the Starry Dragonet or the Stellate Dragonet.   Much like the classic Scooter Dragonet, the males tend to have brighter colors and a larger dorsal fin.

Red Scooter Dragonets only grow to about 3” but still require plenty of room to graze for food, so an aquarium of at least 25 gallons is ideal.  Multiple females can be kept with each male, but if you are planning to keep more than one male an aquarium of 50 gallons or more is a must.

They will eat foods including brine shrimp, bloodworms, glassworms, and small live invertebrates.  The Red Scooter is a slow and deliberate eater as with all of the Dragonets so make sure that they will not be out competed for food by more aggressive tank mates. 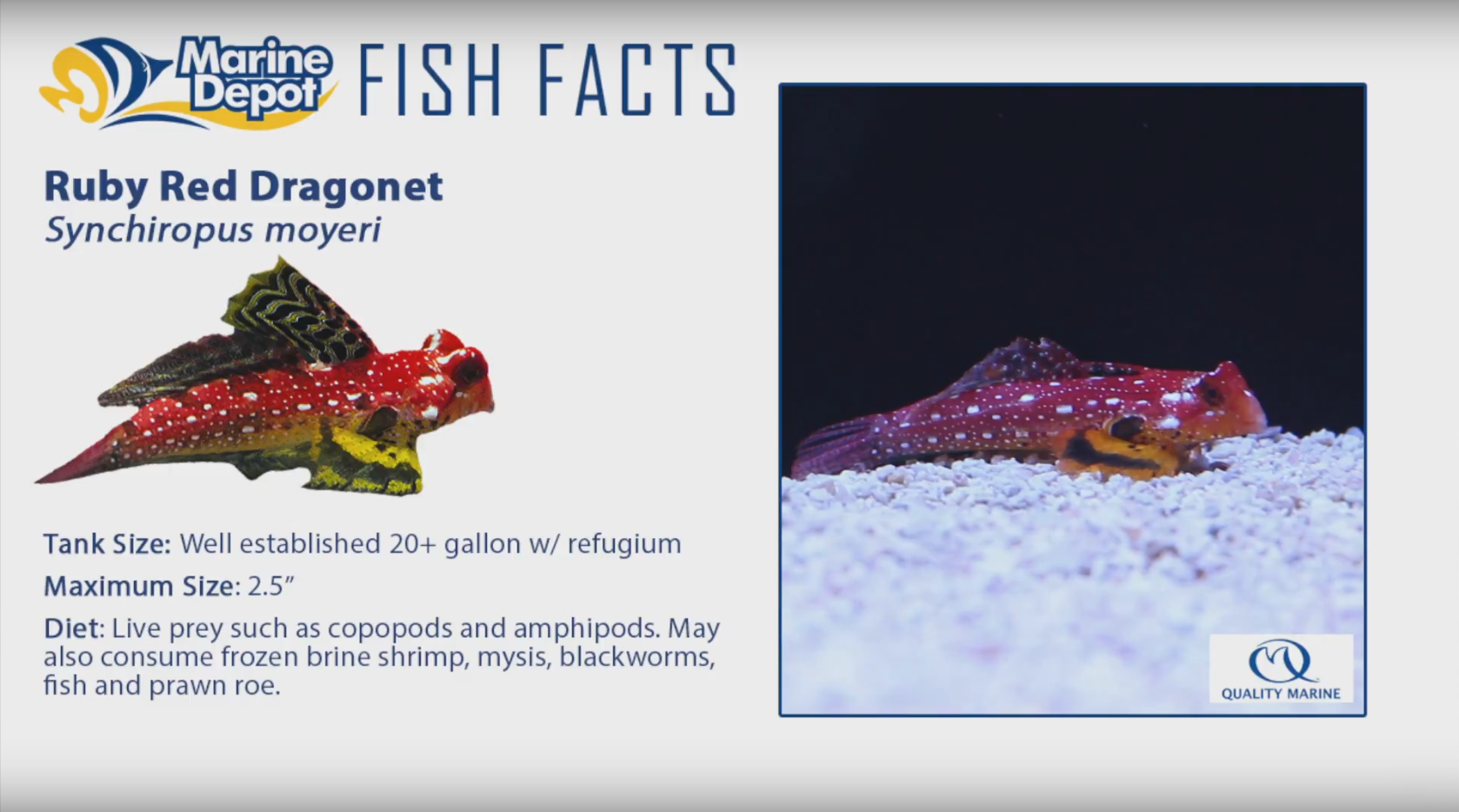 Ruby Red Dragonet or Scarlet Dragonet are among the smallest and only grow to around 2.5”.  It is a brilliant red color with yellow fins and small splashes of across its body. This species is somewhat new to the aquarium trade but is very popular because if the bright colors and steady availability.

Even though they are small enough to fit in tiny tanks, it is very important to only introduce them to established systems.  The reason for this is that they feed on copepods and other live microfauna which can only be found in numbers plentiful enough to sustain these fish in very well established tanks with an external refugium.

Training them to accept prepared aquarium foods such as small mysis, brine and worms can be tricky but will really help with your chances of success in captivity. 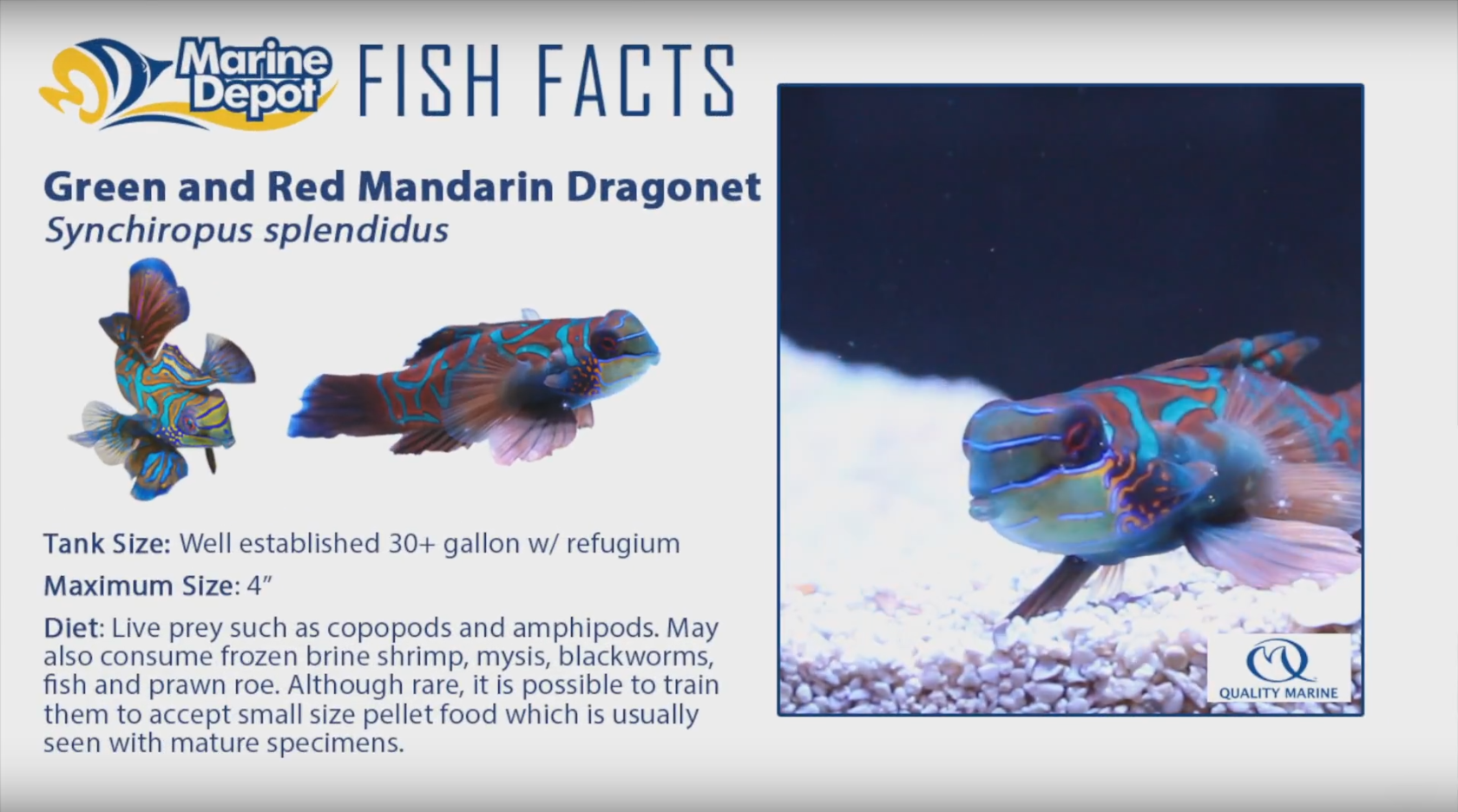 The Mandarin Dragonets are hands down one of the most beautifully aquarium fish you can keep.  Red and Green Mandarin Dragonets are covered in mazelike patterns of brilliant blues, reds, oranges, and greens.  The males and females of the species are very easy to distinguish as the males have an elongated dorsal spine.  The two different color patterns can be attributed to different collection locations in which one group is dominated with a deep red while others have more green.

These dragonets grow to around 4” and need an aquarium of around 30 gallons.  They feed primarily on copepods but, with some effort, can be trained to eat some prepared food.  In tanks that can support them, these Mandarins make great community members and show little aggression to fish outside of their species. 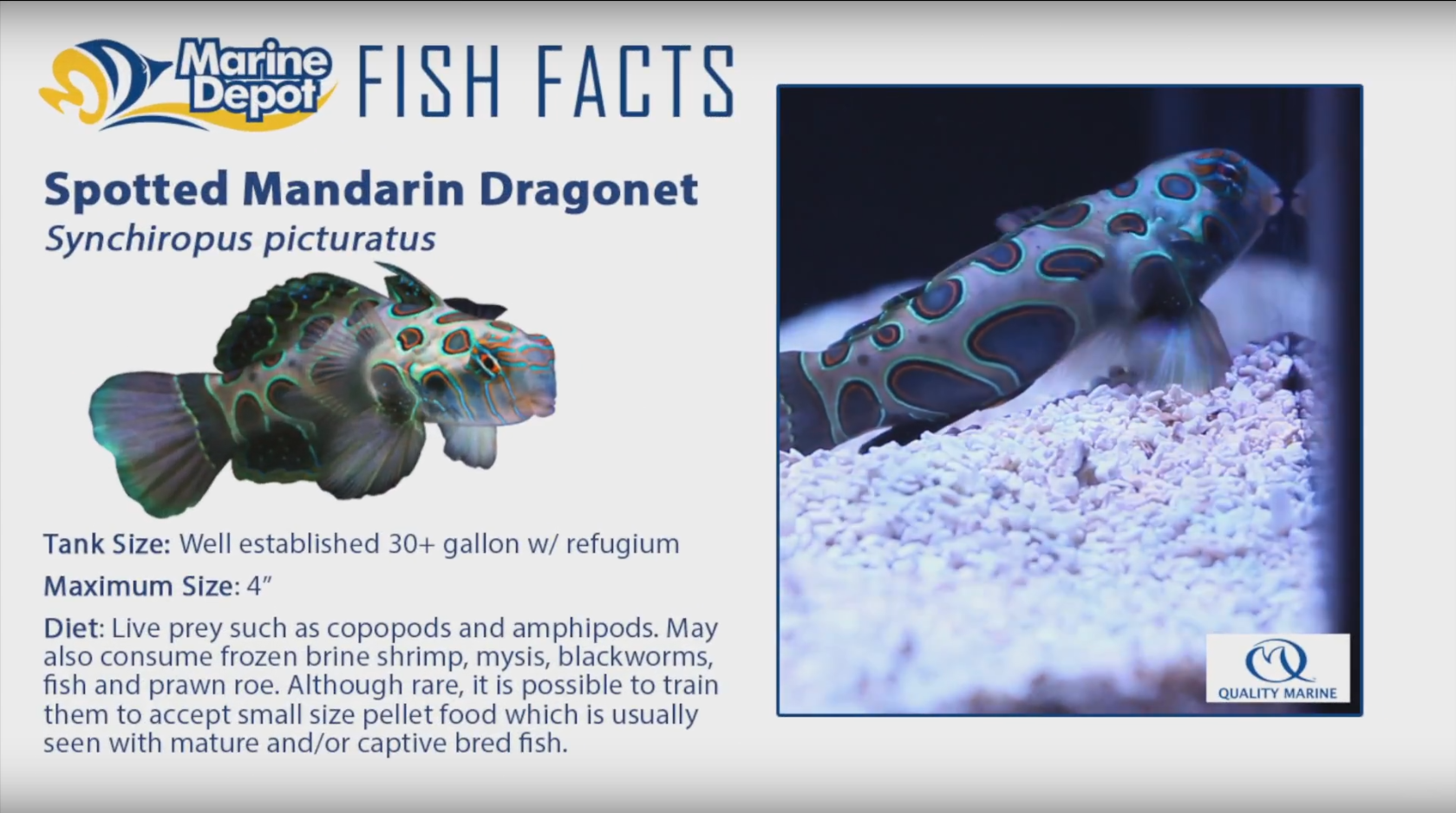 The Spotted Mandarin Dragonet is also called the Psychedelic Mandarin or Picture Dragonet.  It is covered with target-shaped spots of blue, orange and black.  Again, males can be distinguished from females by an elongated dorsal spine.

Spotted Dragonets grow to a maximum of 4” so a tank of around 30 gallons or more is required for keeping them.  They will naturally feed on the copepods and other micro-fauna in your tank will benefit from an established refugium to propagate natural sources of food.

This species has recently gained some popularity because of the reported captive breeding success and acceptance of prepared aquarium foods.