Cycling is the killjoy of starting up a new fish tank. After you get all hyped up on the build, you’re forced to just sit and wait in the corner like a little kid. Being asked “When are we putting fish in?” i.e. “Are we there yet?” everyday by my wife and daughter doesn’t help either. Hoping to speed up the process, I put some fish food in and added little pieces of live rock.

The last stage of the cycle is when nitrate is produced as a byproduct. On the 4th week, I was hoping that it would be ready. I crossed my fingers and grabbed my Nitrate test kit but it turns out—0ppm. Not what I was hoping for. This would have been awesome if I had an established tank, but I need some nitrate! Another week it is…

During this period, my mentor Robert (from our videos) told me to do a small water change. The first thought that came into mind was wouldn’t this hinder and prolong the cycling process? He confirmed my suspicions and said that removing substantial amounts of water during a cycle will only prolong the process.  However, my tank has been running for four weeks with no water removal and gas pockets in the sand bed gave us a strong indication that beneficial bacteria was present and processing waste. A small water change at this point would help ensure the water is clean and ready for animals in about a week. 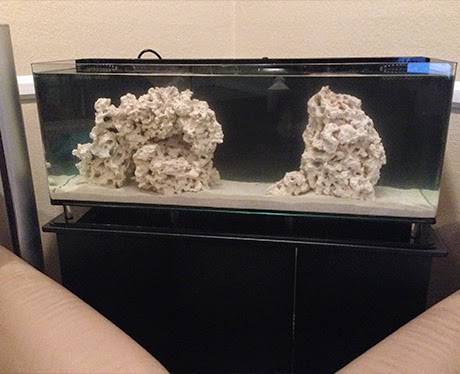 Cycling tank w/ finished rockscape
I also added lights to the tank. I’m currently using a 36-48” Current USA Satellite Freshwater LED Pluswhich I inherited with the tank. Before you say anything, I’m aware that it’s the not the ideal light for a reef tank but it’s what I have at the moment. I definitely plan on upgrading it to a more suitable light in the near future.

Speaking of water changes, I got some feedback on my first post about how crappy my tank location is for maintenance work. I’d actually been warned beforehand and while I appreciate the concern, I’ve committed myself to just deal with it since it’s the best location in my home. I refuse to just stick it against a wall that would be more distracting than compliment a room. I must admit though, I did have my share of spilled water and lifting heavy buckets and jugs over the couches. And yes, I did hear whispers of “I told you so…” in my head.

To minimize this, I moved one of the couches farther away to create more space so now I can easily walk in and out. I also decided to use smaller jugs (2.5 instead of 5 gallon) and buckets so it’s easier to manage. Later on I plan on using a pump and tube combo to replenish the saltwater instead of pouring it in. I also find using an old blanket to cover the floor very helpful in cleaning up after doing maintenance.

By week 5, I suspected my tank was now ready and Robert agreed. Coming from someone who can measure salinity by tasting saltwater, I could have probably taken his word for it but decided to test my parameters anyway. Success! Now I'm excited to add a little life to the tank.

Since we’re in the process of moving the office tank (38 gallon Innovative Marine Nuvo) into a bigger 80 gallon Innovative Marine Nuvo SR-80, I was able to score some coral frags. I got a small rock with a bunch of mushrooms attached to it and a frag of bright green Sinularia (Mushroom Finger Leather Coral). Robert also gave me some birdsnest frags from him home tank.

Before I introduced the corals into my tank, I had to setup a better water flow system. At this point I was only relying on the built-in skimmer and 2 outlets of the Nuvo tank. I got a hand-me-down Koralia 2 x pump + wavemaker kit and I installed one pump at each far side of the tank. Like most hobbyists, I’d love to eventually get my hands on EcoTech Marine’s MP10 (when the budget permits).

I soon realized that placing corals inside your aquarium is not as easy as it seems. Besides arranging them in an aesthetically pleasing manner, I had to consider their light (yes, I know my light isn't appropriate quite yet) and flow requirements. I decided to mount the freshly fragged sinularia to a small piece of live rock. Of course, I forgot to bring home some glue. Good thing I watched the video about fragging soft corals and was able to use a rubber band (c/o my daughter) to mount it. BTW, the sinularia I have is a direct descendant of that sinularia in that video I just linked to. 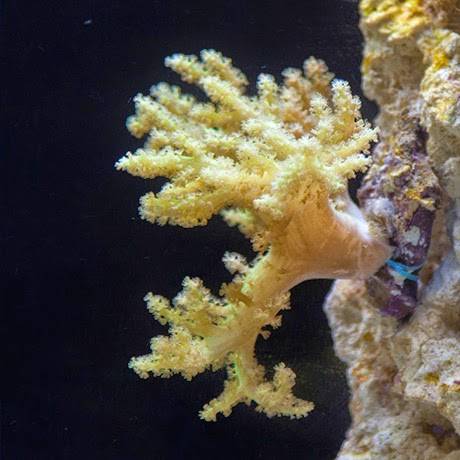 Green Sinularia
As for the birdsnest, it came in a few pieces so I just stuck them together in a hole in the rock. The mushroom was the easiest; I just placed it on the sandbed. I was advised that they spread easily and I don’t really want them taking over a rock, therefore I isolated them (somewhat). For acclimation, I used the Reef Gently AccliMate. 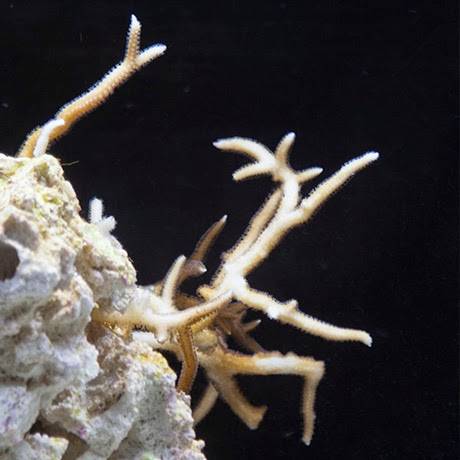 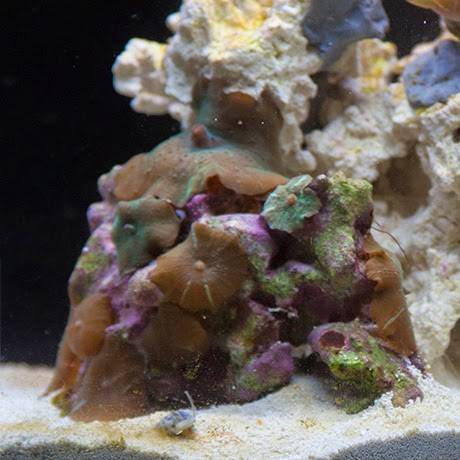 Colored Mushroom Rock
It didn’t take long for the corals to open up and start showing some color—Yes! I didn’t kill them! My loyal sidekick (daughter) was with me all throughout the process but it didn’t really excite her as much as a clownfish would. At least there’s officially life in the tank now!

Like Pringles: once you pop, you can’t stop… I already felt the urge to get more corals. I know it's unwise to add a bunch of animals right away, so I planned to pick up just a few corals and a cleanup crew. I’ve always been an admirer of ricordea, so I’m bent on getting some for sure. I’ve been envisioning my tank to be some sort of ricordea (flower field) farm wherein a big chunk of live rock is just full of colorful ricordea. I also want a coral (e.g., torch coral, hammer coral, etc.) that would possibly have a symbiotic relationship with my future clownfish. I’m open on this one and I’m a little hesitant on anemones since I’ve heard they’re not for beginners. I’m pretty open on the cleanup crew as well, as long as they’re not the type that would easily knock off corals.

I went to a LFS (local fish store), Reef Raft USA. They had so many corals it was  overwhelming. But of course, I needed to stick to the plan and get out of there as soon as I could before maxing out my credit card. I had to develop tunnel vision to keep me away from the pricey specimens. Stick to the plan, I kept telling myself. Thank goodness for self-control. I ended up getting: 2 ricordeas (1 orange; 1 green) and a branching hammer coral. For the cleanup crew, I got: 1 cleaner shrimp; 3 nassarius snails; 1 astraea snail; 2 hermit crabs. 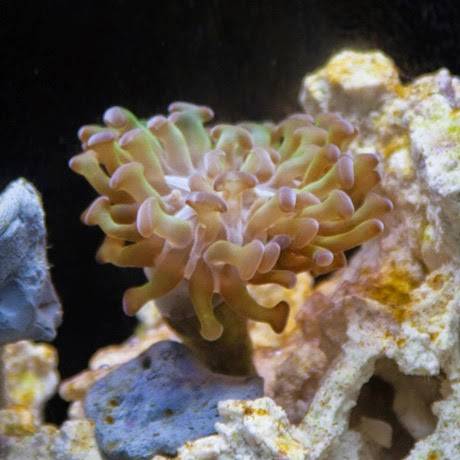 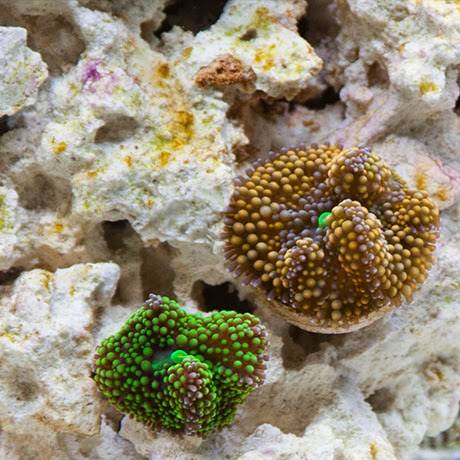 Ricordea Florida
Robert gave me a heads up on how inverts are very sensitive and they need more care in acclimating. I put both the inverts and corals in separate containers and poured tank water in little by little. Arranging the corals didn’t seem as challenging this time. A little research on the lighting and flow needs helped as a guide. I also came prepared this time with E.S.V Zap glue. I was impressed by the thickness of the glue and how it works underwater. I had the scape ready in no time. When I turned on the moonlight that night, I was completely amazed by all the vivid colors in the tank. They literally glow-in-the-dark. I need more ricordeas! 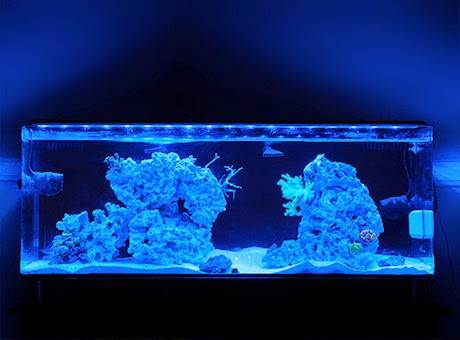 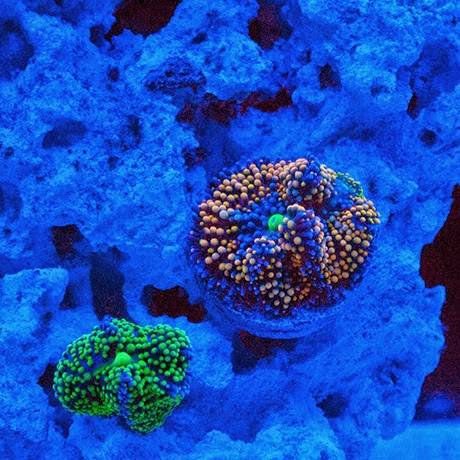 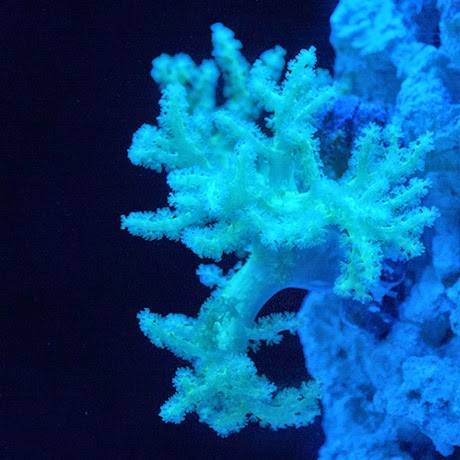 Sinularia under moonlight
After the high of adding livestock to the tank, I had to ensure to keep my new inhabitants happy. I added Seachem’s Phosguard in the system to keep phosphate levels in check. I also started dosing trace elements (Kent Marine) and a 2-part calcium supplement (E.S.V. B-Ionic). Robert kept stressing that I need to test the calcium levels besides nitrate and phosphate levels. Good thing I did because because they were low.

The last installment of livestock (for now…) includes a Bluespotted Watchman Goby, Tiger Pistol Shrimp and a Green Pocillopora. They were up for adoption from Robert’s tank which he had to take down because he’s moving. Since they were endearing to Robert, there’s pressure to keep them alive and healthy. It did require me to take an oath to make sure they’re provided the best possible care.

Once the goby and pistol shrimp were acclimated in the tank, I noticed they act like inseparable BFFs. They dug a hole under the rock and made it their common hideout. I could picture them putting up a sign saying “Home Sweet Home” on the wall. I thought it was weird and then I looked it up and apparently they develop a symbiotic relationship similar to a clownfish and an anemome. The goby acts as the pistol shrimp’s “watchman” since it has poor eyesight and the shrimp protects the goby from predators. Pretty cool! 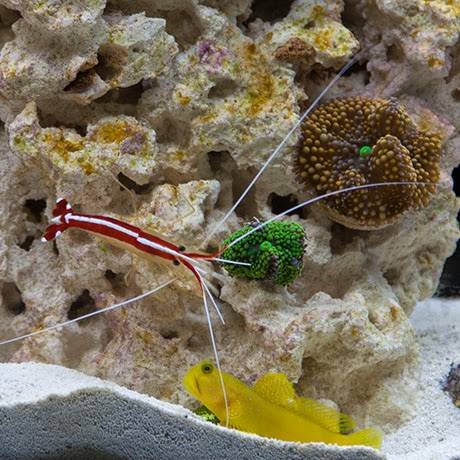 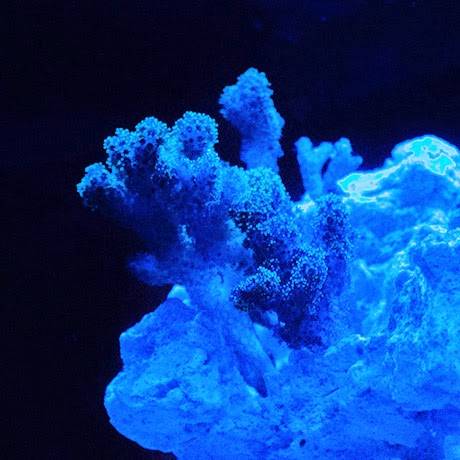 Green Pocillopora under moonlights
It’s nice to finally have a fish in the tank but the goby spends most of its time hiding with the pistol shrimp. I only get to see them from afar. Once I close in, they immediately run for cover. Even when I feed them, they don’t come out until I’m nowhere to be seen (so they think…). I definitely need more lively specimens in my tank. Nothing beats a clownfish for newbies like me! Besides, I promised my daughter we’ll get a “nemo” fish. I’m also thinking of getting a six line wrasse because they look badass. Or maybe a blenny? I really like the unique way they swim. Did I mention I want more ricordeas?