Categories: Experts, How To, Advice, Knowledge Base
Author: Mike Paletta 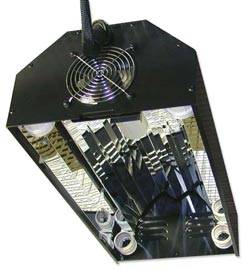 Lighting a reef tank consists of more than putting a certain type or wattage of light over a tank.

Many factors, such as size and depth of the tank and types of organisms kept, need to be considered first and foremost when setting up lighting for the tank. The cost of purchasing and running the lights along with the means for removing the vast amount of heat that is generated by most types of lights also needs to be taken into account when selecting lights. Lastly, and just as importantly, the aesthetic effect of the lights chosen on the tank needs to be considered and compared. This is important in that many types of light can provide adequate illumination for the organisms, but not every type of light is aesthetically pleasing to every tank owner. The choices for lighting a tank have come a long way from when the hobby began, but there is still not a perfect method for lighting a tank. Fortunately, once the pros and cons for each lighting method are understood, it becomes much easier to decide on which system is best for the desired application.

In the early years of keeping saltwater tanks, most tanks were lit with a single low wattage fluorescent tube that came with the hood. No one thought of using more light as at that time the concept of keeping live corals and other inverts was not considered. In the mid-1980s, information and pictures from Europe demonstrate success in the maintenance of many marine invertebrates. One of the first things that stood out was the intense lighting that was used on these tanks. The improved lighting results from the aquarists' understanding of the symbiotic relationship between lighting and the algae that lived within the coral's tissue: corals utilize sunlight, the only energy that is readily available, as their source of nutrients when nutrient levels are low in the ocean. By having zooanxthellae, a type of dinoflagellate within their tissues, corals are able to convert their waste products into usable products. During respiration corals gives off carbon dioxide and ammonia that is absorbed by the zooanxthellae. The zooanxthellae then utilize these substances during photosynthesis and produce oxygen and carbohydrates as by-products. Therefore, it is crucial that proper lighting is provided for corals in a reef tank.

The amount of light striking a reef in its natural habitat can almost never be replicated in a home aquarium. This light has been measured to be between 110,000 and 120,000 lux at the surface of the reef and 20,000-25,000 lux one meter below the surface. While it may seem that we can add more bulbs to reach these values, space and heat limitations make this impossible. Fortunately, the adaptability of many corals has allowed them to be kept successfully in closed systems where lighting levels may be as much as an order of magnitude less than they are on the reef.

The desire to match intensities found on the reef has led to a school of thought upholding that lighting intensity is the critical factor for keeping corals. However, it has also been demonstrated that red and orange lights are quickly absorbed by seawater and blue light passes through seawater best. Hence, many other aquarists support the idea that choosing the right spectrum is more important. Since the early days of reef keeping, the two groups evolved into supporting different lighting systems, with the first utilizing metal halide lamps, which provide strong intensity, while the latter prefers fluorescent lamps, which provide the only blue colored lamps available at the time. To further complicate the matters, in the early 1990's small polyped stony corals began to be maintained in many reef tanks. The general consensus was that since these corals typically came from clear shallow water only metal halide lighting could be used to keep them alive.

Today, there are a wide variety of options when it comes to lighting a reef tank, including metal halides, very high output (VHO) fluorescent lamps, power compact (PC) fluorescent lamps, and the new T-5 fluorescent lamps. Having all of these options available may make it just as difficult to make a choice as it was in the past, but at least now there are a lot to choose from. In my opinion, a reef tank should be lighted as strongly as possible relative to the space available and affordability. More generally, the goal is to get at least 4-5 watts/gallon of balanced light above a reef tank. The decision of which type of lighting system to use is a function not only of the tank's size, but also of the type of corals and animals kept. For large tanks over 90 gallons, it may be more cost effective to use metal halide lamps, especially if small polyped stony corals such as Acropora are going to the invertebrates predominantly housed. Some manufacturers of metal halide lighting systems and good reflectors include PFO and Current USA. In smaller tanks or in those housing predominantly soft corals, it may be more cost effective to use either very high output (VHO) or power compact (PC) fluorescent lamps such as those made by Coralife and PFO. 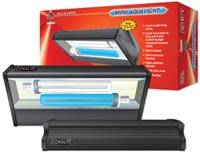 The determination of how much light a particular type of bulb produces has become as controversial as which type of light to use. Initially, the best measure we had of how much light is being produced was to use the lux measurement. Lux is a direct measure of light produced where one lux equals the amount of light produced when one lumen falls perpendicularly on one square meter. A lumen equals the amount of light produced by a candle from a distance of one foot. This is a relatively easy and inexpensive measure to take; all that is required is a lux meter, which is readily available. Unfortunately, this measurement is skewed toward the human eye in that light in the green or yellow spectrum is detected better than light at the other wavelengths. As a result, this measure will give a general idea of much light is striking an aquarium but not necessarily how much is useable by the animals. A measure of how much light that can be utilized by the corals is now available. The quantum meter can break down light into wavelengths and measure how much light at a particular wavelength is present. With regard to reef tank lighting, this device can measure how much light is present between 400 to 700 nanometers. Light between these wavelengths can be utilized by many corals including zooanxthellae for photosynthesis, and is known as photosynthetically available radiation, or PAR.

This measurement is quite useful in that for the first time it allows us to assess exactly how much useable light is being emitted from virtually any type of light or bulb. Unfortunately, the device to take this measurement is very expensive so few hobbyists will actually be able to take these measurements within their own tank. However, several authors have taken measurements from the various lights available and these numbers can be read from a variety of publications. This measurement is given in microeinsteins or quanta and provides for the first time a way to compare between bulbs how much of the light emitted is available to the corals.