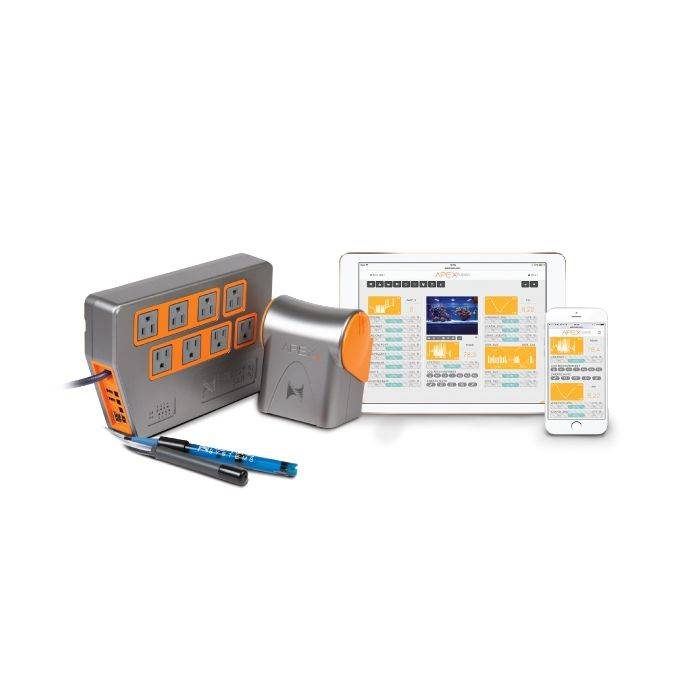 The ApexEL has built-in WiFi, Temperature, pH, monitoring and much more!. Set reminders, log testing and dosing information, and access your tank from anywhere with Apex Fusion!

Included WiFi lets you now connect to the internet even easier. With the Fusion Cloud interface, everything is easier from calibrating probes to customizing outlets. Fusion gives you the ability to monitor and control your Apex from anywhere in the world.

The Neptune Systems EnergyBar 832 is 100% compatible with the ApexEL, with more robust outlets, individual LEDs show the status of each outlet, per outlet power consumption monitoring. An added bonus to the EB832 is the addition of 1Link ports for accessories like the DOS and WAV pump that can now connect directly to the EnergyBar 832 saving room and eliminate messy cords keeping your tank's equipment looking perfect.

The ApexEL Head Unit can monitor your aquariums pH and Temperature right out of the box. The completely new design also incorporates a sleek, rotating mounting system letting you securely mount the brains of the Apex system while having easy access to probe cords and aquabus connections.

Now with built-in WiFi, connecting your ApexEL system has never been easier. With the totally free Fusion cloud-based software, getting connected, and controlling can be done within minutes. You can now do firmware updates through WiFi on your local network

The Neptune ApexEL comes with one EnergyBar 832 now has eight individual, 7 amp relayed outlets letting you use any outlet for any device. Each individual outlet can also monitor and detect power usage in amps or watts, letting you set alarms and send emails when pumps have clogged or failed, lights are not turning on, heaters leaking current, letting you be notified of the issue before it becomes a problem. With electricity costing more and more money per Kilowatt hour having the ability to monitor each pump, heater, and light lets you now make better decisions on the overall value of your equipment.

Each EnergyBar 832 also has two 24VDC accessory ports that can power small pumps, solenoids, fans and more, while the built-in 100W DC power supply lets you control up to 3 1Link accessories like the WAV circulation pumps, and DOS fluid metering system without the need for any additional power supplies or consuming additional outlets. The EB832 also has 3 AquaHub connections letting you expand to any existing or upcoming module making your ApexEL System truly limitless.

Neptune didn't stop there, with an all-new mounting system on the EnergyBar orients the power strip in the correct direction keeping cords neat and tidy. While the outlets have a bit wider spacing, and orientated opposite of each other keeping room for those bulky transformers, allowing you to plug in almost anything you want, where you want.

Double junction pH probe lets your readings stay more stable without the need to calibrate as often. With the Apex System calibrating your probes through your dashboard is easier than ever before. The dashboard will automatically recognize when your readings have stabilized and letting you know when to move to the next step, no more guesswork and having to read RAW data.

Fusion is a cloud-based site that lets you access your ApexEL from anywhere in the world. Letting you customize outlets, set reminders, log testing parameters, while monitoring and controlling any aspect of your aquarium through your phone, tablet, or desktop.

Apex Fusion has released an IOS app that now integrates directly with your ApexEL Controller System. Having the app now lets your Apple desktop, Ipad, or phone receive notifications directly from your Apex Controller. No more need for emails or text messages.

Compatible with all Neptune Accessories

If you have any old modules, head units, energy bars, or other Apex accessories they will work flawlessly with the new ApexEL Controller. Want to add Salinity monitoring, just connect a Neptune PM2 module, need Dissolved O2 monitoring, add a PM3. The Neptune Systems ApexEL is expandable and compabitle, making it the ultimate reef tank aquarium controller.

More Information
Reviews
Write Your Own Review
Only registered users can write reviews. Please Sign in or create an account
Product Questions