MaxSpect has recently released the 2nd Generation of the Gyre pumps that offer some great new features. The original XF-130 and XF-150 are extremely popular due to their ability to produce a unique GYRE flow pattern.

As we learned with the original release of the Gyre pumps, their biggest advantage of these awesome circulation pumps is the Crossflow Technology.

A traditional water pump shoots out water from a focused center point.

This tends to result in a "hot", strong, spot just in front of the pump and water flow weakens going further away from the pump; causing dead spots throughout the tank.  This requires multiple propeller pumps to get optimal flow throughout your entire tank.

The Crossflow Technology of the Gyre delivers water in a linear and wide pattern that travels the entire length of the aquarium.  The water then bounces back from the opposite wall, creating a circular flow pattern that will likely encompass your entire aquarium and reduce or even eliminate dead spots. 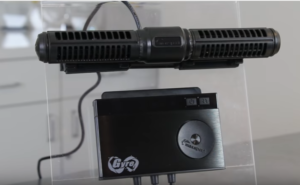 The most exciting new feature is the new Advanced Gyre Controller which allows you to create different flow cycles so you can have various flow patterns during different parts of the day. These patterns include constant speed, pulsing, alternating gyre, and a new gradual pulsing and random mode.

For those of you interested in the advanced programming this new controller has some awesome features. It allows you to set the minimum and maximum flow rates, flow times as well as a rump up and ramp down feature. 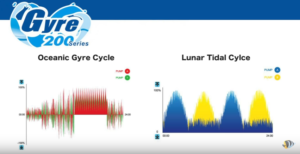 For those of you that just want to set it and forget it without figuring out all the programming details, the Advanced Gyre Controller features two 24-hour presets. A Lunar Tidal Cycle that mimics ocean currents during high and low tides , as well as a Oceanic Gyre Cycle that creates a gentle alternating Gyre in your aquarium and is preset for operation with two pumps.

If you wish to utilize the alternating mode; two pumps are going to be required because the controller will alternate flow between the two pumps.  You have the option of running them synchronized, anti-synchronized, and time delayed.  Better yet, you only need a single controller to operate both pumps and therefore you do not need to purchase a second controller or go through any sort of complicated programming with a third party aquarium controller. 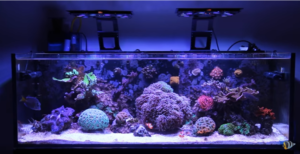 I have been lucky enough to get hands on the Maxspect Ethereal LED lights with ICV6 controller as well as these new 200 series Gyre pump. I am sure impressed with the ease of operation and all the new control features.  The output of the Ethereal LED is awesome and when paired with the pumps you can create a pretty impressive environment in your tank that closely mimics natural coral reefs.